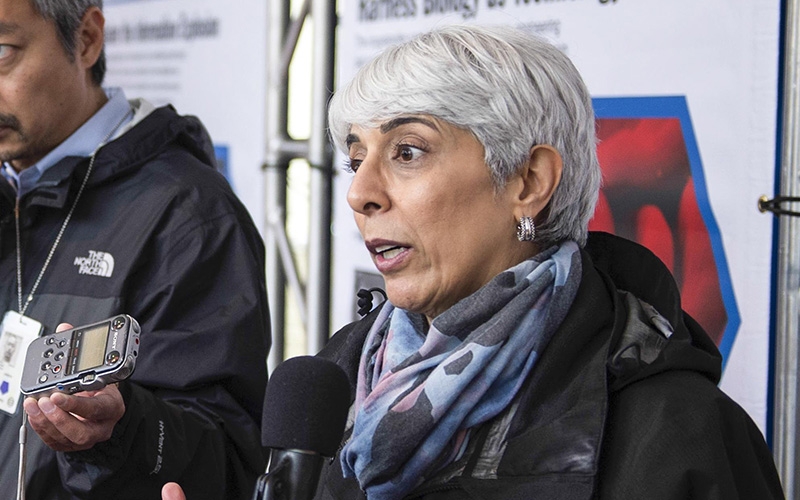 Yesterday, President Biden announced he will nominate engineer Arati Prabhakar to direct the White House Office of Science and Technology Policy, and that pending her Senate confirmation she will also be his science adviser and a Cabinet member. She previously led the National Institute of Standards and Technology under President Bill Clinton and the Defense Advanced Research Projects Agency under President Barack Obama.

Prabhakar replaces geneticist Eric Lander, who resigned from the roles in February after news reports revealed he had verbally abused OSTP staff members, including members of the legal staff who clashed with him over ethics rules. Since then, former National Institutes of Health Director Francis Collins has been Biden’s interim science adviser, while OSTP Deputy Director for Science and Society Alondra Nelson has led the office on an acting basis.

Biden’s selection of Prabhakar to lead OSTP marks the first time a woman or a person of color has been nominated for the job. Prabhakar is a longstanding advocate for applications-oriented R&D and her extensive expertise in areas such as microelectronics R&D meshes tightly with the Biden administration’s agendas for science, technology, and the economy.

Born in India, Prabhakar emigrated to the U.S. as a child. She was raised in Chicago and Lubbock, Texas, and studied electrical engineering at Texas Tech University. She also took summer jobs at Lawrence Livermore National Lab and at Bell Labs, and went on to graduate school at Caltech, where she earned a doctorate in applied physics in 1985.

In an interview with AIP’s Center for History of Physics in 2020, she remembered reacting negatively to the research-focused environment at Caltech, saying,

I learned some incredibly valuable things, but the most important thing I learned was that academic research life and the outlook of science weren’t for me. You know, science's verbs are ‘know’ and ‘understand.’ Those are not my verbs. Yes, let's know and understand, but I want to do engineering's verbs, which are ‘solve’ and ‘create.’

Seeking a different experience, she applied for a fellowship at Congress’ now-defunct Office of Technology Assessment. Working there from 1984 to 1986, she undertook a study on microelectronics R&D, which was an area of pressing economic and political concern due to competition from Japan.

In the AIP interview, she reflected that OTA was not an attractive long-term prospect for her because it involved presenting information to lawmakers while remaining neutral about conclusions. “I learned a lot and I honored that, because I think it's valuable, but I wanted to pick a direction and go,” she said.

While at OTA, Prabhakar was recruited to DARPA, where she initially oversaw materials R&D projects related to semiconductors and fiber-optic communications. She recalled feeling energized by the agency’s application-oriented culture.

Coming to specialize in microelectronics, Prabhakar managed federal support for the semiconductor industry consortium Sematech and an R&D thrust in gallium arsenide, an alternative material to silicon in chipmaking. In the latter capacity, she was party to an incident in 1990 in which DARPA exercised a new spending authority to invest $4 million in a startup called Gazelle Microcircuits in exchange for access to intellectual property. Though heading off investment from Japan, the move ran afoul of President George H. W. Bush’s stance against industrial policy. Because the project also had a high profile, it led quickly to the firing of DARPA Director Craig Fields.

For her part, though, Prabhakar went on to become founding director of a new Microelectronics Technology Office that Fields’ successor set up. Then, when Clinton became president in 1993, his administration supported a more active economic policy and he picked Prabhakar at the age of 34 to be the first woman to lead NIST.

Concerned about industrial stagnation, in 1988 the Democratically controlled Congress had renamed the National Bureau of Standards as the National Institute of Standards and Technology. It also created a new Advanced Technology Program (ATP) and Manufacturing Extension Partnership (MEP) program at the agency to offer direct support to U.S. companies. The Clinton administration committed to vastly scaling up the programs and to almost quadrupling NIST’s topline budget in four years, and it charged Prabhakar with transforming the agency’s relationship with industry.

That agenda had strong congressional support at first and by 1995 ATP and MEP had expanded to occupy more than half of NIST’s budget, which was also growing. However, after the Republicans gained control of Congress that year, they proved openly hostile to the Commerce Department, which oversees NIST. Momentum behind the administration’s ambitions for the agency diminished and Prabhakar stepped aside as director in 1997. Congress ultimately defunded ATP in fiscal year 2008.

After leaving NIST, Prabhakar moved to the West Coast to take up a position in private industry. She made brief stops as a senior executive at the companies Raychem and Interval Research, and then from 2001 to 2010 she joined the Silicon Valley firm U.S. Venture Partners, which focused on providing early-stage support for startups.

Her portfolio continued to revolve around semiconductors, though it later also encompassed technologies such as solar photovoltaics and battery management. She recalled the experience as educational but grueling, remarking, “I know very few happy venture capitalists.”

In 2012, Prabhakar was appointed director of DARPA, which commanded a budget of almost $3 billion, several times larger than that of NIST. At that point, DARPA’s portfolio in biology was expanding, covering subjects such as the application of neuroscience to prosthetics as well as methods of rapidly developing vaccines and antibody treatments, which proved urgently relevant during the COVID-19 pandemic.

To coordinate such efforts, Prabhakar created a Biological Technologies Office in 2014, echoing the agency’s earlier creation of its microelectronics office. She also launched a Pandemic Prevention Platform focused on antibody treatments.

In addition, she fostered research in social science, regarding it as increasingly important to the effective application of science and technology. After leaving DARPA at the end of the Obama administration, she carried that interest into a nonprofit organization she founded called Actuate, which aims to leverage philanthropic funding to advance technology “solutions” in areas such as climate change, health, and data science.

Since the beginning of the Biden administration, Prabhakar has broadly advocated for using the DARPA model to focus the U.S. R&D “ecosystem” on national problems. She has also specifically recommended creating an ARPA organization within the Labor Department that would develop methods for helping workers locate and train for better jobs.

Prabhakar’s advocacy aligns with Biden’s focus on integrating R&D and economic policy, such as through last year’s Infrastructure Investment and Jobs Act as well as the subsidies for the semiconductor industry currently nearing the finish line in Congress. The semiconductor program in particular would bookend Prabhakar’s early experience with DARPA and Sematech in the 1980s and ‘90s.

Also, as OSTP director Prabhakar will be poised to help implement new and proposed innovation initiatives. The National Science Foundation recently set up a Directorate for Technology, Innovation, and Partnerships that aims to strengthen the links between research and its application, including through a new Regional Innovation Engines program. Congress may soon endorse plans to significantly expand the NSF directorate and could steer it to serve specific technology areas. Lawmakers are also contemplating creating a separate technology hub program in the Commerce Department.

In addition, Prabhakar would take over from Francis Collins the implementation of the new ARPA for Health, which Congress created this year with an initial appropriation of $1 billion. She previously worked with Collins on the Obama administration’s BRAIN Initiative, but as DARPA director she sought to carve out an approach to biomedical research that was distinct from that of NIH, which she regarded as singularly focused on academic research.