White House Office of Science and Technology Policy Director and Presidential Science Advisor Eric Lander resigned yesterday after staff members went public with complaints that he had created an atmosphere of intimidation at OSTP through flagrant verbal abuse. 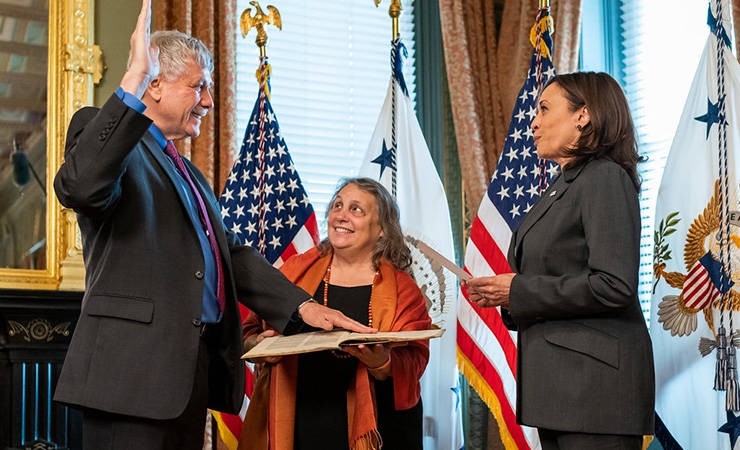 Eric Lander, left, being sworn in on June 2 as OSTP Director by Vice President Kamala Harris, right. Lander took his oath on a 500-year-old copy of the Mishnah, a Jewish rabbinic text, explaining he was inspired by the ethical tradition it represents.

When geneticist Eric Lander was sworn in as director of the White House Office of Science and Technology Policy eight months ago, he reflected that he and his office were called to the high ethical task of “repairing the world.” Yesterday, OSTP was left to pick up the pieces when Lander resigned after his verbally abusive behavior toward staff members surfaced in the press.

The news outlet Politico reported yesterday morning that the White House initiated an internal investigation of bullying allegations against Lander last fall. After concluding in December those allegations were credible, White House officials prescribed minor remedies, in spite of a pledge by President Biden to fire appointees caught demeaning others. Subsequently, a staff member leaked a recording of a briefing on the investigation to Politico reporter Alex Thompson, and 14 current and former OSTP staff members ultimately offered Thompson first-hand accounts of Lander’s actions.

As OSTP director and presidential science advisor, Lander has recently focused on championing biomedical initiatives, such as the relaunch of the Obama administration’s “Cancer Moonshot” announced on Feb. 2, and the proposed Advanced Research Projects Agency for Health. Lander was scheduled to testify about ARPA–H on Capitol Hill today, but his appearance was cancelled.

In his resignation letter to Biden, Lander indicated he plans to depart the administration no later than Feb. 18.

According to the briefing recording obtained by Politico, the White House investigated Lander in response to a complaint filed by OSTP Deputy Counsel Rachel Wallace, whom Lander had demoted from the role of general counsel. Corroborating her allegations, the investigation also uncovered “instances of multiple women having complained to other staff about negative interactions with Dr. Lander, where he spoke to them in a demeaning or abrasive way in front of other staff.”

The investigation concluded Lander had violated the White House’s Safe and Respectful Workplace Policy. In response, the White House required OSTP’s roughly 140-person staff to undergo training on the policy and for Lander to hold more meetings with subordinates, such as “brown bag sessions.” In addition, the White House would reassess Lander’s behavior after a period of 30-to-45 days.

After Politico began investigating the situation, the 14 staff members who spoke to Thompson offered additional details about Lander’s behavior. They noted it was directed against both men and women, though six staff members related that Lander appeared to, in Thompson’s words, “take delight in trying to embarrass female colleagues in front of others.” Eight of the staff members said they felt the sanctions against Lander were inadequate.

As Politico prepared to publish its investigation, Lander sent an email to OSTP staff apologizing for speaking to some of them in a “disrespectful or demeaning way,” and promising he would “do better.”

Disgust with that email prompted Wallace to detail her experiences to Politico. She said that Lander “retaliated against staff for speaking out and asking questions by calling them names, disparaging them, embarrassing them in front of their peers, laughing at them, shunning them, taking away their duties, and replacing them or driving them out of the agency.” She added, “Numerous women have been left in tears, traumatized, and feeling vulnerable and isolated.”

Wallace is a civil servant who has worked for the federal government since the Clinton administration. Although the internal investigation did not conclude her demotion was “procedurally improper,” it did determine Lander punished her in other ways, such as through exclusion from meetings and assignments.

Other staff members told Politico there was widespread fear of Lander in the office and said he insulted and shouted at subordinates and subjected them to cruel behaviors such as insistently probing them on areas outside their expertise and forcing them to admit their ignorance.

One staff member recounted that Lander showed remorse for his actions, but also an inability to change, saying after one encounter, “I hate that I do it.”

Lander was well aware of widespread doubts about his character and judgment when he verbally abused the OSTP staff members.

During his confirmation hearing, Sen. Tammy Duckworth (D-IL) and others grilled him on incidents from his past. These included a 2016 article Lander wrote on the origins of the CRISPR gene-editing technique that downplayed the contributions of two women scientists engaged in a long-running patent dispute with the Harvard-MIT Broad Institute, which Lander directed. They also included Lander’s decision to toast DNA co-discoverer Jim Watson despite knowing about Watson’s history of racist, anti-Semitic, and misogynistic remarks.

“So, I strongly encourage you to use this hearing as an opportunity to explain how you've learned from your past mistakes,” Duckworth said.

In response, Lander acknowledged his misjudgment in those incidents and vowed he would make diversity and equity a central part of his work at the White House.

Promoting inclusive workplaces has become a major policy issue in the scientific community in recent years as protests have grown against racial and gender discrimination, sexual harassment, and other forms of abusive behavior.

Lander’s predecessor as OSTP director, Kelvin Droegemeier, made such issues one focus of an interagency committee he established dedicated to improving “research environments.” Within Biden’s OSTP, they are a major part of the portfolio of sociologist Alondra Nelson, whom Biden appointed to a new position focused on “science and society” at the same time he announced Lander as science advisor.

Last month, OSTP further underscored the importance of the issue in new scientific integrity guidelines that stated, “A strong culture of scientific integrity begins with ensuring a professional environment that is safe, equitable, and inclusive of all scientists. Attention must be given to creating welcoming environments across federal agencies.”

The guidelines also stressed the need to hold political appointees accountable for their actions.

Resignation only came in face of public scrutiny

Just after his inauguration, Biden unambiguously and publicly told his appointees he would show no tolerance for disrespectful behavior within his administration, remarking,

I’m not joking when I say this: if you are ever working with me and I hear you treat another colleague with disrespect, talk down to someone, I promise you I will fire you on the spot — on the spot, no ifs, ands, or buts.

Once Lander’s behavior became public, reporters asked White House Press Secretary Jen Psaki why that policy had not been applied to Lander. She replied that Biden’s remarks had led to the creation of the policy Lander violated and that Lander’s behavior was being monitored.

Some OSTP staff members believed Lander was protected by his stature and connections, according to Politico. It notes that, after Lander served as co-chair of the President’s Council of Advisors on Science and Technology when Biden was vice president, he served on the board of the Biden Cancer Initiative, a private charitable organization Biden founded. In addition, Deputy White House Chief of Staff Bruce Reed was formerly president of the Broad Foundation, which funds the Broad Institute.

In any case, as yesterday wore on it became increasingly clear Lander’s position in the White House was untenable. The American Association for the Advancement of Science, for instance, disinvited him from speaking at its annual meeting next week.

The AAAS CEO and presidential line explained, “Unfortunately, toxic behavioral issues still make their way into the STEM community where they stifle participation and innovation. OSTP should be a model for a respectful and positive workplace for the scientific community — not one that further exacerbates these issues. AAAS takes its role as a representative voice of the scientific enterprise seriously.”

Late yesterday, the White House relented. Psaki remarked in a statement, “The president accepted Dr. Eric Lander's resignation letter this evening with gratitude for his work at OSTP on the pandemic, the Cancer Moonshot, climate change, and other key priorities. He knows that Dr. Lander will continue to make important contributions to the scientific community in the years ahead.”

Lander has been on leave as director of the Broad Institute, and the institute has not commented on whether it plans to accept him back in that role.

When Biden nominates a replacement for Lander, that person will have to go through a Senate confirmation process that is badly backed up.

Currently, the Senate is still processing nominations for other key science policy positions such as the heads of the Food and Drug Administration, Department of Energy Office of Science, and National Institute of Standards and Technology, as well as the deputy heads of the National Oceanic and Atmospheric Administration and the Defense Department’s research and engineering enterprise. Also pending are nominations for leaders of the research arms of the Environmental Protection Agency and Department of Homeland Security and weapons programs at the National Nuclear Security Administration.

In addition, over a year into his administration, Biden has yet to announce a nominee to direct the U.S. Geological Survey. He also must nominate a replacement for National Institutes of Health Director Francis Collins, who stepped aside in December after over 12 years in the role.

If Democrats lose control of the Senate next January, delays could become much worse for any nominations left unconfirmed at that time.