Democratic leaders are narrowing their ambitions for Congress’ bipartisan innovation policy bill in a push to finish it in July, but many questions remain about what the final product will look like. 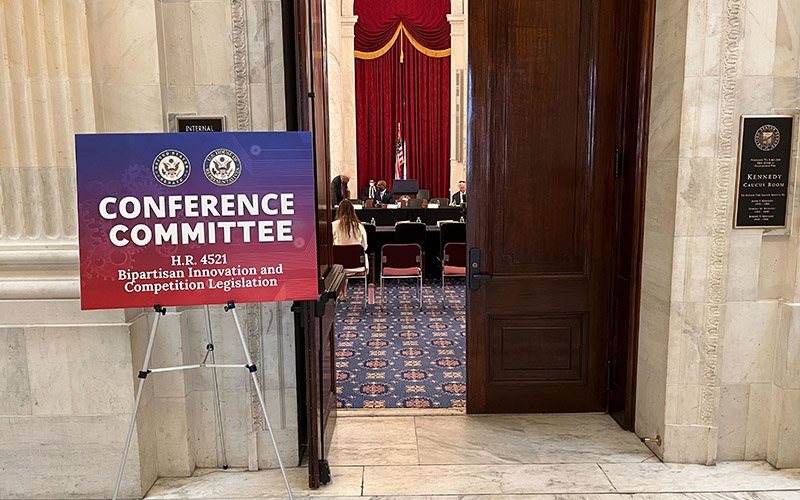 Negotiations to reconcile the House’s America COMPETES Act of 2022 with the Senate’s U.S. Innovation and Competition Act (USICA) are in the final stretch, with Democratic leaders pushing to pass a compromise bill by the time Congress departs for its usual August break. The urgency stems from the dwindling time remaining to reach a deal before the November election diverts lawmakers’ attention and the current legislative session expires at the end of the year.

The bills reflect broad bipartisan interest in improving U.S. capabilities in research and technology development relative to China and other competitor nations, and each includes $52 billion in direct funding for semiconductor R&D and manufacturing. However, the bills sharply diverge over matters such as how to shape a multiagency R&D push, how to build up regional R&D capacity, whether to expedite visas for technically skilled foreign citizens, and how to protect U.S.-funded research from exploitation by rival governments.

Lawmakers also attached a host of provisions unrelated to science policy to each bill, opening up debates over far-flung matters such as trade and environmental policy. Any final bill will require the support of at least 10 Republican senators to avoid a filibuster, which gives the Senate additional leverage in the negotiations.

Negotiators have been working behind closed doors since the 107-member conference committee tasked with reconciling the legislation held its first meeting in May.

House Speaker Nancy Pelosi (D-CA) said earlier this month that they are “narrowing” the scope of the legislation in hope of reaching compromise, without indicating what they have dropped. She and Senate Majority Leader Chuck Schumer (D-NY), a key proponent of the legislation, met with their Republican counterparts last week to discuss prospects for a final deal.

“We expressed our belief that there is no reason that we should not pass this bill through Congress in July,” Pelosi and Schumer said in a statement. “Democrats have already made accommodations in the name of reaching an agreement, which we are optimistic can happen soon.”

However, some Republicans reportedly prefer to revisit the legislation next year since they may gain control of Congress after the midterm elections. Nevertheless, any final bill would still require support from both parties and the Biden administration.

The semiconductor funding has put lawmakers under particular pressure to complete the bill, with some leaders in the industry warning a delay could lead them to invest in other countries that have already moved ahead with incentives. President Biden has also made the case for quick action on the legislation, arguing it has measures that will help reduce supply chain disruptions that contribute to inflation.

“Pass the damn bill and send it to me,” Biden said in May. “It’s going to help bring down prices, bring home jobs, and power America’s manufacturing comeback.”

Semiconductor subsidies seen as down payment 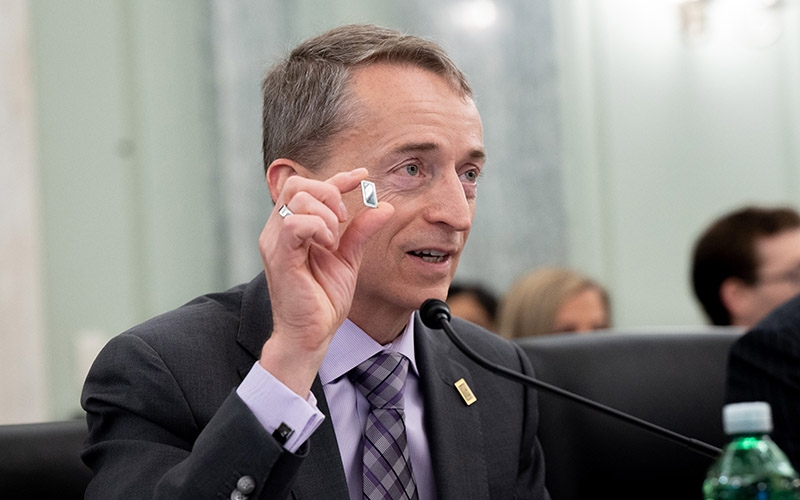 The semiconductor money would fund programs authorized in the CHIPS for America Act, which Congress passed in early 2021. Of the total, $39 billion is for manufacturing incentives and most of the remainder is for R&D initiatives, with almost all the money channeled through the Commerce Department.

Backers of the CHIPS Act have also advocated for Congress to create a tax credit specific to the semiconductor industry, but lawmakers appear to have abandoned the idea of attaching it to the compromise legislation to avoid complicating negotiations.

The top Republican for tax policy in the House, Rep. Kevin Brady (R-TX), argued at the conference kickoff meeting that the legislation should not include tax provisions, especially any that favor a specific industry. Sen. John Cornyn (R-TX), a lead advocate of the semiconductor tax credit, told FYI that he and Sen. Mark Warner (D-VA) attempted to include it in the original legislation.

“We were told [the credit] wasn't going to be feasible in the Senate when we passed the CHIPS Act, and so we opted for the emergency spending. But I still think in the long term it’s going to take a reliable source of support, and that probably means an investment tax credit, not just spending,” he said.

Budget targets for science agencies up in the air

While the semiconductor funding is among the most consequential aspects of the bills, their R&D policy sections would also set ambitious targets for ramping up selected federal science agency budgets. Actually meeting those targets would still require Congress to supply the funding through the annual appropriations process.

Nearly three years ago, Schumer first floated a proposal to create a massive new directorate at the National Science Foundation to drive progress in vanguard technologies such as artificial intelligence and quantum computing, and he teamed up with Sen. Todd Young (R-IN) to advance the idea legislatively. Senators substantially revised the proposal as it progressed through the chamber, paring back its spending goals for NSF, carving out large roles for the Department of Energy and Defense Advanced Research Projects Agency, and attaching a broad policy update for NASA.

The bill the Senate ultimately passed, USICA, recommends Congress ramp up NSF’s annual budget from its current level of $8.8 billion to $21.3 billion over five years, with the technology directorate’s annual budget growing to $9.3 billion. It also recommends DOE and DARPA each receive about $17 billion above their base budget over the same period for complementary R&D on the technology areas funded by the new NSF directorate.

Meanwhile, the House Science Committee disagreed with the Senate focus on technology development and advanced a distinct vision for the NSF directorate oriented around applying science to “societal challenges” such as climate change, social inequality, and cybersecurity. The committee also proposed Congress channel extra funds into existing programs across NSF, the DOE Office of Science, and the National Institute of Standards and Technology. And in a further break with the Senate, it opted not to loop NASA into the legislation.

The committee ultimately produced bipartisan legislation that recommends Congress ramp up NSF’s annual budget to nearly $18 billion over five years, with the new directorate growing only to $3.4 billion. Over the same period it also recommends increasing the Office of Science budget from $7.5 billion to $11.1 billion and the NIST budget from about $1 billion to almost $1.8 billion.

The committee has argued its proposals reflect a deeper understanding of the agencies’ strengths and have broader support from science organizations than the approach taken by USICA. But critics counter that the point of the Senate legislation is to prioritize select technologies, and Young has said he plans to stand firm on his vision for the NSF directorate.

The House ultimately made the committee’s legislation a central plank of the COMPETES Act, which it passed in February on a party-line vote, with Republicans primarily objecting to provisions not arising from the Science Committee.

Some senators have embraced aspects of the House’s vision, with leaders of the Senate Energy and Natural Resources Committee introducing legislation for the DOE Office of Science that hews closely to the Science Committee proposals. However, it is unclear whether their proposals would displace the funding recommendations for DOE in USICA or add to them, or how much support they have among senators.

Among other issues being negotiated, one of the most closely watched is the bills’ contrasting approaches to expanding the geographic distribution of federal R&D funding beyond its historical concentration in a handful of states.

USICA proposes to dramatically expand the Established Program for Competitive Research (EPSCoR), which funds projects in designated states and territories that have received a small fraction of federal R&D funding. It would require that EPSCoR jurisdictions immediately begin receiving at least 20% of NSF’s annual budget, roughly double the amount they currently receive from the agency, and it would create an analogous requirement for the additional funds it authorizes for DOE.

Among the top proponents of the idea is Sen. Roger Wicker (R-MS), a lead negotiator for the legislation, who has argued it was a decisive factor in securing Republican support for USICA. The idea also enjoys significant support from Democratic senators, 15 of whom joined 24 Republican senators to formally endorse it, all from EPSCoR states.

Lawmakers from non-EPSCoR states have pushed back on the idea, with a bipartisan group of 18 senators and 76 representatives arguing it undercuts well-established institutions and unfairly excludes institutions in their states that would benefit from research capacity-building funds.

“Arbitrarily walling off a sizable percentage of a science agency’s budget from a sizable majority of the country’s research institutions would fundamentally reduce the entire nation’s scientific capacity and damage the research profiles of existing institutions,” they wrote in a letter to the conference committee in May.

Consistent with this view, the COMPETES Act does not mandate a specific set-aside for EPSCoR and instead proposes creating location-agnostic programs for building research capacity at institutions outside the top-tier.

One compromise approach reportedly under consideration is to make the set-aside requirement only apply to new funds allocated to NSF, not its entire budget.

Many Republican lawmakers have insisted that any major push to increase federal funding for R&D should be paired with new policies to prevent rival governments from exploiting the U.S. R&D system. Democrats have supported some measures proposed by Republicans but have generally advocated to narrow their scope to avoid chilling productive international collaborations.

For instance, both USICA and the COMPETES Act would bar federal science grantees from participating in talent recruitment programs sponsored by the governments of China, Russia, Iran, and North Korea, though the COMPETES Act explicitly limits the ban to programs deemed “malign.” Similarly, both would also require grantees to disclose gifts they receive from foreign sources, but the COMPETES Act sets a $50,000 threshold for triggering the requirement whereas USICA sets no minimum. The Association of American Universities has created a chart summarizing such differences between the bills.

One exception to this dynamic is that there is strong bipartisan interest in creating a mechanism for blocking U.S. entities from investing in sensitive industries in “countries of concern.” A version of the proposal is included in the COMPETES Act and its backers are actively seeking to include it in the final legislation. A compromise proposal reportedly under development would tie the screening process to the list of critical and emerging technologies produced by the White House, among other criteria.

Prior to passing the COMPETES Act, Democrats attached provisions that would exempt STEM doctoral graduates and some master’s degree graduates from numerical caps on employment-based visas, a move colloquially known as “stapling a green card” to diplomas.

Some Senate Republicans have said they are open to including STEM immigration reforms in the legislation, notably Young and Cornyn. However, Sen. Chuck Grassley (R-IA), the top Republican on the Senate Judiciary Committee, which handles immigration policy, announced at the conference meeting in May he will object to including any immigration measures.

Asked for clarification by FYI, Grassley said he does not want to “establish the principle of doing immigration bills on other bills,” while noting he is open to creating fast-track visas for STEM graduates through separate immigration reform legislation. “I've changed my mind in the last 7, 8, 9 years on that whole issue. I didn't want to give that just because they got degrees here, but I've changed my mind completely and I would open up the door,” he said.

Rep. Zoe Lofgren (D-CA), a leading advocate for the STEM immigration provisions, conceded last week that Grassley’s opposition would likely be decisive. “If he doesn’t agree it probably doesn’t stay in," she said.