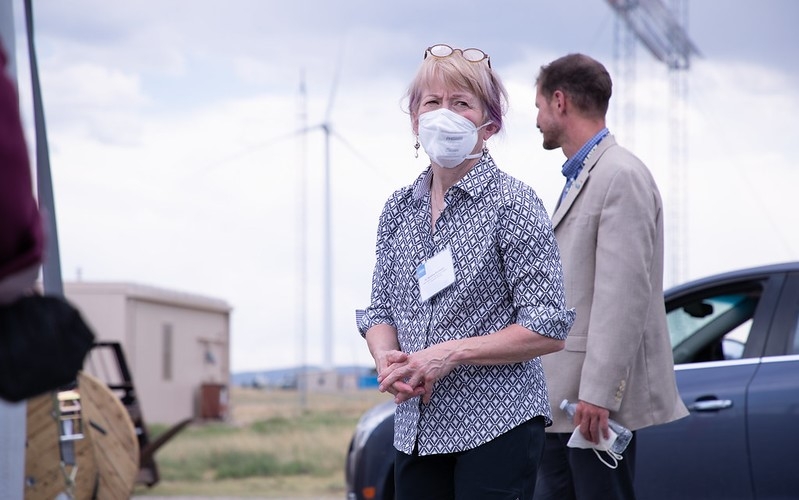 Department of Energy Under Secretary for Science and Innovation Geraldine Richmond during a recent visit to the National Renewable Energy Laboratory in Colorado. Richmond briefed the President's Council of Advisors on Science and Technology last week on DOE's implementation of the Justice40 initiative and other aspects of the Biden administration's equity agenda. (Image credit – Joe DelNero / NREL)

The Biden Administration took a significant step in implementing its Justice40 initiative last week, announcing a sweeping array of federal programs that it will cover. Established through an executive order Biden signed during his first week in office, Justice40 requires that 40% of the overall benefits of federal activities in areas such as climate change mitigation and environmental protection flow to disadvantaged communities.

The Department of Energy is playing a major role in Justice40, which will apply to a large fraction of its programs, including many of its R&D programs. It has been working over the past year to flesh out its plans for the initiative based on White House guidance, and will present an overview of its progress at a kickoff webinar on Aug. 17.

DOE Under Secretary for Science and Innovation Geri Richmond discussed the department’s equity-focused efforts at a meeting of the President’s Council of Advisors on Science and Technology last week, highlighting Justice40 as well as recently launched workforce programs within the DOE Office of Science. “Justice40 is everything that we do. It's in every conversation that we have. It's in every FOA (funding opportunity announcement) that goes out,” she said, adding, “This a new DOE.”

Any federal program focused on these areas is considered a “covered program” and must direct its investments to disadvantaged communities. The term “investments” covers a wide range of activities in this context, including grants and loans, procurements, and direct financial assistance to individuals.

A memorandum the White House issued a year ago tasked federal agencies with assessing which of their programs are covered by Justice40. It also directed each agency to develop criteria for identifying disadvantaged communities and methods for calculating the benefits of their investments, requiring that agencies “ensure public participation and that community stakeholders are meaningfully involved” in determining what constitutes a benefit.

DOE recently released detailed program guidance and a mapping tool for identifying disadvantaged communities, and last week it announced a total of 146 covered programs across the department. Among these are its renewable energy, energy storage, nuclear energy, and carbon management R&D programs, and the Advanced Research Projects Agency–Energy.

Many of the activities funded through last year’s Infrastructure Investment and Jobs Act are covered as well, including large-scale demonstration projects such as the regional hydrogen hubs and advanced nuclear reactor projects supported by the new Office of Clean Energy Demonstrations. The office is set to receive more than $20 billion through the infrastructure law over the next several years, and could potentially receive almost $6 billion more through the recently proposed Inflation Reduction Act, which Democrats appear poised to pass using Congress’ budget reconciliation process.

DOE Office of Science programs are generally not covered, except for its workforce and diversity programs, including the SBIR/STTR small business programs and the recently launched RENEW program, which aims to increase participation and retention of underrepresented groups in the office’s research activities.

Richmond emphasized the importance of Justice40 to PCAST, saying, “Every FOA has within it, you have to address issues of Justice40. You have to do it and you will be judged on that.”

She reported encountering some resistance to the initiative, saying, “We're getting a little bitching and moaning around the edges from folks saying, ‘This is new, what are we going to do?’ And we say, ‘Well, it's not really new. You've been doing that as broader impacts for NSF for 50 years.’”

Richmond said she hopes other agencies adopt a similar approach to equity issues. “I would like to have something like that be the standard for other agencies — not necessarily copying DOE, but just making sure that the desire to reach broad communities is in everything we do.”

The list of covered programs across the federal government is expected to evolve over time. Overall, several hundred have been announced so far, and after DOE the agencies with the most are the Environmental Protection Agency, Department of Agriculture, and Department of the Interior.

Alongside Justice40, DOE is also pursuing a number of other efforts to advance the Biden administration’s “whole-of-government equity agenda,” which was established through another of Biden’s early executive orders.

In April, the department issued an “Equity Action Plan” assembled through a yearlong process that identified five top priorities for advancing equity across the department: improving data collection, expanding stakeholder engagement, and increasing opportunities for new applicants and underrepresented groups to participate in DOE’s procurement, financial assistance, and R&D programs. Actions outlined in the plan include implementing diversity, equity, and inclusion requirements for R&D programs, reducing administrative burdens for grant applications, and diversifying the pool of merit reviewers.

The Office of Science’s RENEW (Reaching a New Energy Sciences Workforce) program issued its first funding opportunity announcements in May, covering five of the office’s six main science programs. The office plans to provide $40 million through its first round of RENEW grants to Historically Black Colleges and Universities, other minority-serving institutions (MSIs), and other institutions that are “historically underrepresented” in the office’s research portfolio.

The activities supported by the grants vary across programs but include expanding training opportunities in quantum computing, facilitating research exchanges between MSIs and DOE national labs in fields such as plasma science, and building up research infrastructure at institutions that have not traditionally been active in particle physics.

The office is seeking $60 million for RENEW in fiscal year 2023 as well as $36 million for a new initiative called FAIR (Funding for Accelerated, Inclusive Research) that aims to build research capacity at minority-serving institutions, including in “environmental justice regions.”

At the PCAST meeting, Richmond argued that workforce development is needed to achieve DOE’s energy goals, and that barriers such as low graduate student and postdoc salaries pose particular problems for early-career researchers from underrepresented groups.

“People are the engines that make this go. We can't do any of this stuff if we don't have the people, and we are having a shortage, a true shortage, an urgent shortage of young people. But what gets me optimistic is there's so many young people that want to work on climate issues, right? They want to make a difference. They want to make a difference in the world,” she said.