President Biden’s second budget request repeats proposals to increase funding across the board for non-defense science agencies, with an emphasis on those connected to his priorities in climate change mitigation, clean energy R&D, manufacturing, and technology. 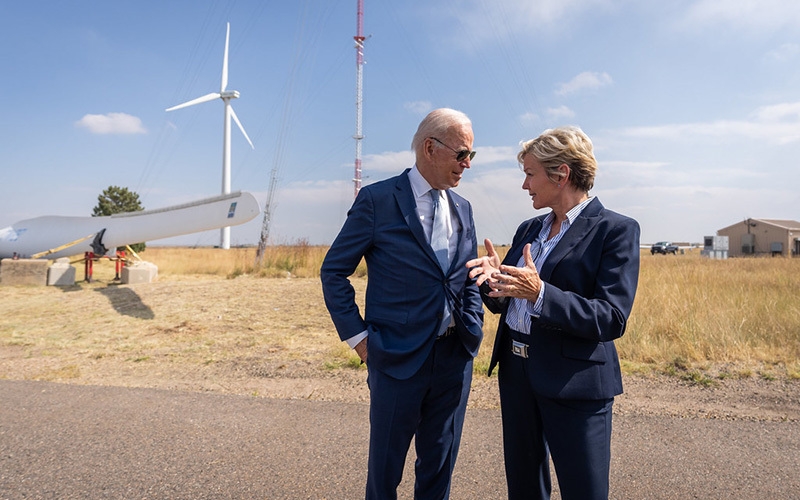 Just two weeks after President Biden signed Congress’ appropriation for fiscal year 2022 into law, his administration has begun to roll out its fiscal year 2023 budget request to Congress,

Biden is seeking significant funding increases across science agencies focused on health, manufacturing, energy, and the environment. He also aims to ramp up funding for the newly established Advanced Research Projects Agency for Health and the National Science Foundation’s new Directorate for Technology, Innovation, and Partnerships.

Details about specific projects and programs will be found in the budget justification documents that agencies will release over the coming weeks. As they become available, links to these documents will be assembled along with summary figures in FYI’s Federal Science Budget Tracker. 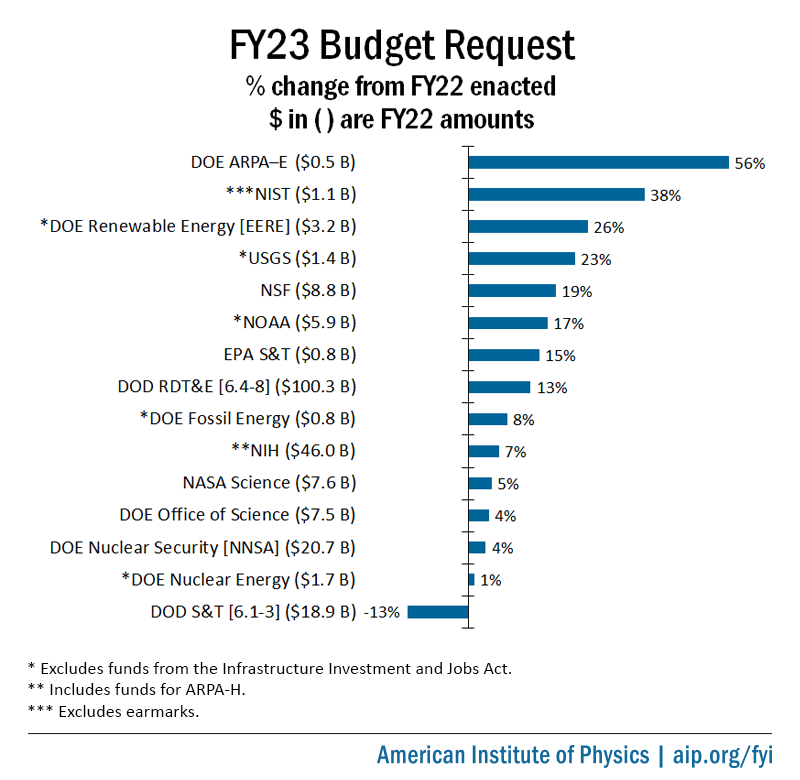 Within a 4% overall increase for the Office of Science, the administration seeks to boost the Biological and Environmental Research program budget by 11% to $904 million, which would in part support the newly established Urban Integrated Field Laboratories program and a proposed “virtual” national laboratory dedicated to climate. Increases for other programs would range from 4% for High Energy Physics to only 1% for Fusion Energy Sciences, notwithstanding pending congressional proposals to expand the office and a recent White House summit calling for a “bold vision” for fusion energy, specifically.

There are, though, new steps planned across programs, including the initiation of an inertial fusion energy activity and milestone-based payments for private fusion ventures, as well as three cross-cutting initiatives. An Energy Earthshots initiative will support energy technology priorities, including by setting up competitively selected “Energy Earthshot Research Centers.” A Funding for Accelerated, Inclusive Research (FAIR) initiative will support research in clean energy, climate, and related areas through minority-serving institutions. Finally, an initiative simply titled “Accelerate” will support technology-oriented science and workforce-development training.

DOE has not yet released documentation indicating how much funding it is requesting for the office’s various construction projects.

With DOE now preparing to spend the more than $60 billion it is receiving through the Infrastructure Investment and Jobs Act, the administration’s proposals for the department’s applied energy offices are generally less ambitious than last year’s. An exception is that it seeks to increase funding for the Advanced Research Projects Agency–Energy from $450 million to $700 million. That is $200 million more than it sought last year and would involve expanding the agency’s scope to include R&D on “climate adaptation and resilience innovations,” which it previously envisioned funding through a separate ARPA for climate.

Among other offices, the administration proposes to raise the budget for the Office of Energy Efficiency and Renewable Energy by a quarter to just over $4 billion, which would include $150 million for a new solar energy technology manufacturing initiative. The Office of Nuclear Energy’s budget would remain essentially flat under the request, while an 8% increase in the Office of Fossil Energy and Carbon Management’s budget would support additional R&D in methane mitigation and carbon capture, transport, storage, and conversion.

The NNSA budget would increase 4% to $21.4 billion, largely in support of ongoing modernization of nuclear weapons production infrastructure such as plutonium manufacturing facilities. Within NNSA’s roughly $3 billion portfolio of weapons stockpile R&D activities, priorities include the buildout of exascale computing capabilities and a new facility for imaging plutonium implosions. Among its nonproliferation activities, NNSA requests $20 million to launch a “bioassurance program” in partnership with the Office of Science that would “anticipate and detect threats and broaden DOE’s role in national biodefense.”

The administration is still seeking to significantly expand NSF, proposing a nearly 20% total increase to $10.5 billion, similar to its previous request. Congress ultimately only provided the agency a 4% increase for the current fiscal year, though it did endorse NSF establishing the Directorate for Technology, Innovation, and Partnerships.

NSF now requests $880 million for the new directorate, of which $200 million would go to creating “Regional Innovation Engines” across the country, with the mission of catalyzing “new business and economic growth in those regions of America that have not fully participated in the technology boom of the past several decades.” Among NSF’s existing research directorates, proposed increases range from 10% over fiscal year 2021 levels for the Mathematical and Physical Sciences Directorate to around 20% each for its Geosciences, Engineering, and Biological Sciences Directorates.

NSF does not propose any new major construction projects, only requesting resources to continue with projects that were significantly disrupted by the pandemic. These include the Vera C. Rubin Observatory in Chile and new ocean research vessels as well as upgrades to bases in Antarctica and detectors at the Large Hadron Collider in Europe.

NIST’s research budget would increase 15% to nearly $1 billion, with priority areas to include quantum information science, artificial intelligence, cybersecurity, and climate-resilient building standards. Among the proposed initiatives, the agency requests $10 million to “strengthen U.S. leadership in international standards development for critical and emerging technologies,” a topic of growing interest among policymakers. It also seeks $10 million for reactor repairs and staffing improvements at its Center for Neutron Research, which has been offline since February 2021 when a mistake made during a refueling operation led to a radiation incident.

Funding for NIST’s contribution to the Manufacturing USA institutes network would increase six-fold to nearly $100 million under the request to support the first year of four new institutes, one of which would focus on semiconductor design and manufacturing. The request comes as NIST is poised to potentially steward billions of dollars for semiconductor R&D provided by legislation currently pending in Congress. 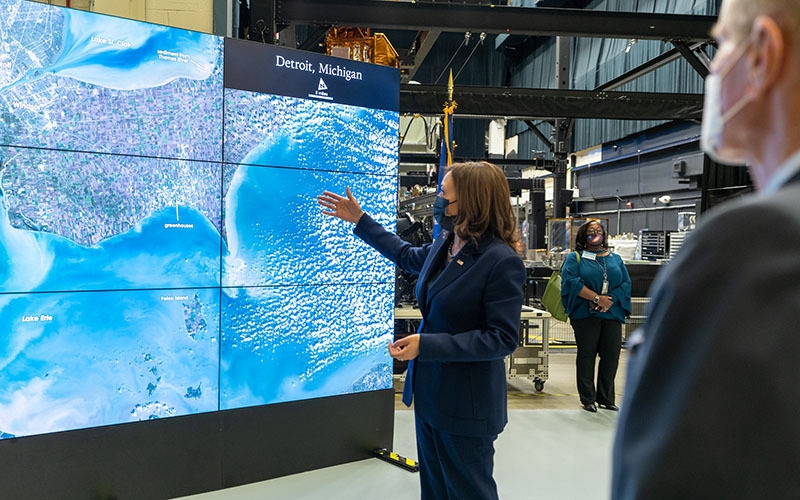 The budget for NASA’s Science Mission Directorate would increase 5% to almost $8 billion, with most of the increase allocated to its Earth Science Division. The division’s additional funding would support work on priorities such as the Earth System Observatory satellites, future missions in the Landsat program, and monitoring of wildfires and greenhouse gas emissions.

Within a nearly flat Planetary Science Division budget, funding for the Mars Sample Return mission would ramp up to over $800 million, while early work on an international Mars Ice Mapper mission would be terminated. In addition, funding for the Near Earth Object Surveyor mission would be pared back and its target launch date delayed two years. The Astrophysics Division budget would take a small cut, with termination of the SOFIA airborne telescope proposed for a third year in a row. The budget for the Heliophysics Division would also decline slightly.

NOAA’s topline budget would increase 17% to $6.9 billion under the request, reflecting the agency’s central role in the administration’s plans for mitigating the impacts of climate change. Although the agency has not yet released detailed budget figures, a highlights document states the administration is seeking to increase NOAA’s Climate Competitive Research program 40% to $92 million to help provide decisionmakers with more actionable climate change projections.

The administration also repeats its push to swiftly raise the budget for NOAA’s satellite division to a steady annual level of around “$2 billion plus inflation.” The additional funds would enable NOAA to build out its next generation of Earth and solar observation satellites, including the flagship Geostationary Extended Observations (GeoXO) constellation. Among NOAA’s weather programs, the request includes $40 million for acquiring a prototype phased-array radar to help evaluate replacements for the agency’s current radars, which it states rely on “1988-based technology.”

Within its request for an overall 4% increase for the Department of Defense, the administration is seeking a 7% increase for DOD’s Research, Development, Test, and Evaluation accounts, which would add $9 billion to an already historically high spending level. However, funding for the early-stage Science and Technology accounts would decline 13%, essentially reversing the increase Congress just provided. Within that, though, the administration is seeking to increase funding for the Defense Advanced Research Projects Agency by 7% to $4.1 billion, with an emphasis on electronics technology programs.

The budget for the National Institutes of Health would increase by $4 billion to roughly $49 billion, which includes $5 billion for the Advanced Research Projects Agency for Health (ARPA–H). Although Congress has not yet passed legislation formally establishing ARPA–H, it provided $1 billion for it in fiscal year 2022 through the Department of Health and Human Services. The appropriation requires HHS Secretary Xavier Becerra to decide whether to place the agency within NIH or elsewhere within the department, and his decision is expected imminently.

Beyond ARPA–H, funding for some of NIH’s 27 institutes and centers would decrease slightly, breaking the string of increases they have received since 2015. Outside the ordinary appropriations process, the administration seeks $12.1 billion for NIH as part of a multiyear, HHS-wide pandemic preparedness initiative that would support vaccine and diagnostics R&D, biosecurity initiatives, and research infrastructure.