The House passed the America COMPETES Act of 2022 today on a nearly party-line vote that foreshadows challenges the House and Senate may face in crafting a compromise bill capable of passing both chambers. 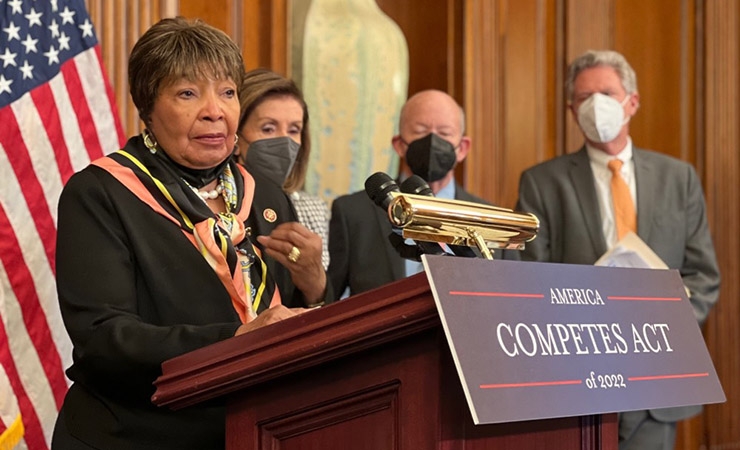 The House passed the America COMPETES Act of 2022 today on a nearly party-line vote of 222 to 210, with Reps. Adam Kinzinger (R-IL) and Stephanie Murphy (D-FL) breaking ranks to respectively vote for and against it.

The nearly 3,000-page legislative package is the House’s response to the U.S. Innovation and Competition Act (USICA), which the Senate passed last year on a bipartisan vote of 68 to 32. Lawmakers will soon form a conference committee to negotiate a compromise bill that can garner enough support to pass both chambers.

Among its core science provisions, the COMPETES Act sets ambitious targets for ramping up the budgets of the National Science Foundation, Department of Energy Office of Science, and National Institute of Standards and Technology. It also updates policy across those agencies, aiming to reinforce and expand on their existing research programs.

In addition, the COMPETES Act seeks to bolster U.S. industry by directly providing $52 billion for domestic semiconductor R&D and manufacturing, and by recommending that Congress appropriate $45 billion for a new program to bolster domestic supply chains for critical goods. The bill further includes wide-ranging provisions concerning trade policy and foreign relations that similarly aim to improve the strategic position of the U.S. but are largely unconnected to the bill’s science provisions.

In a floor speech, House Science Committee Chair Eddie Bernice Johnson (D-TX) observed that the science provisions of the COMPETES Act are built around 13 bipartisan bills that her committee developed, which have been endorsed by various scientific organizations and industry groups.

“With this legislation, we are making investments to build clean energy solutions, address the climate crisis, reinforce our national security, enhance our semiconductor manufacturing capabilities, and so much more. In short, we are acting to address the critical needs identified by the scientific community, industry, academia, and other stakeholders as what they need most to succeed in the 21st century,” she remarked.

In contrast to the Senate’s approach with USICA, Democrats on the House Science Committee have been deliberate in not casting the legislation exclusively as a response to China’s growing technological capabilities, framing it instead as improving the ability of the U.S. both to compete globally and address challenges at home.

Nevertheless, some aspects of the bill are explicitly tied to the U.S.–China rivalry. House Speaker Nancy Pelosi (D-CA), a longtime critic of the Chinese government’s track record on human rights, called out the country in her floor speech on the bill and in a press conference today. Highlighting the bill’s foreign-policy provisions, she remarked, “We are positioning U.S. interests and values to win in the world arena, including holding the People's Republic of China accountable for genocide and using slave labor.”

Speaking to the rationale behind the bill’s science provisions, she recalled the “Rising Above the Gathering Storm” report the National Academies released in 2005, which was often cited in the legislative push that led to the America COMPETES Act of 2007.

“Years ago, there was no question we’re number one. And then people followed our lead, [making] investments in education and research and development. And then they had lower labor costs, so jobs exited,” she said, adding that the Academies report represented a “call to action from the scientific community that there was a gathering storm of competition overseas.”

For their part, House Republicans have sought to portray the new COMPETES Act as a weak response to challenges posed by the Chinese government, with House Minority Leader Kevin McCarthy (R-CA) framing it as the “America Concedes Act.” Republicans have also noted that many components outside the Science Committee provisions were not developed through a bipartisan process.

Science Committee Ranking Member Frank Lucas (R-OK) remarked in a statement, “The speaker hijacked good bipartisan bills dealing with U.S. competitiveness and countering the malign influence of China to pass another Democratic wish list that will go nowhere in the Senate.” He also suggested the House’s process could ultimately “make it more difficult to reach a bicameral, bipartisan deal on a bill.”

Prior to approving the COMPETES Act, the House incorporated more than 200 floor amendments, including a large set from Democrats and a smaller set of bipartisan and Republican amendments.

Among the Democratic additions are ones that expand on a proposal in the bill to exempt holders of STEM doctorates from caps on the number of people to whom the U.S. can grant permanent residency. The changes include extending the cap exemption to “health professions” and to master’s degree holders in certain fields deemed critical to U.S. interests. In addition, STEM students could claim “dual intent” status, meaning they could declare their interest in pursuing a career in the U.S. after graduation rather than first returning to their home country. USICA does not have analogous provisions.

Another adopted immigration amendment would create a special visa pathway for a limited number of scientists and engineers who are identified as contributing to the “national security innovation base.” The same proposal was incorporated into the House version of the National Defense Authorization Act for Fiscal Year 2022 with bipartisan support, but it was removed during the final negotiations with the explanation that existing visa pathways could serve the same purpose.

Another notable Democratic amendment would require science agencies to take into consideration whether applicants for research funding have committed sexual harassment or been the subject of the administrative actions resulting from harassment investigations. While both the unamended COMPETES Act and USICA include provisions mandating institutions disclose such actions to agencies, they stopped short of directing agencies to take that information into account when making funding decisions.

Among the bipartisan amendments is one that mirrors a USICA provision creating a nonprofit “Foundation for Energy Security and Innovation” that would channel private funds toward energy R&D that complements work funded by the Department of Energy. Another amendment would direct DOE to expand support for university-based nuclear research, including through the construction of new reactors.

Thorny science issues yet to be resolved

When the House-Senate conference committee convenes to work through the differences between USICA and the America COMPETES Act, the conferees will have numerous disagreements to sort through. These include contentious trade and foreign policy matters, the immigration provisions, and specific science policy issues, such as research security measures and mechanisms for expanding the geographic distribution of R&D funding awards.

In a call with reporters this week, a staff member for Science Committee Democrats suggested a compromise can be reached on USICA’s proposal to funnel at least 20% of the funds it authorizes for NSF and DOE through the EPSCoR program. EPSCoR works to build research capacity in designated states and territories that historically have received a small share of federal R&D funds, but the America COMPETES Act would create new programs to direct capacity-building funds to institutions outside the top-tier regardless of their location.

“Do we think blanket 20% for EPSCoR states is the right answer? No, we've been clear on that. But we support the goal of geographic diversity. I'm optimistic that we can get to an agreement on how to approach that,” the staff member said.

The staff member stressed the committee has worked to refine a provision banning grantee participation in “malign” talent recruitment programs supported by certain countries, so as not to prohibit normal academic collaborations. Asked about how uncertainty over what collaborations are allowed has led some scientists to preemptively shun work with scientists in China, the staff member replied, “A lot of the reaction you're talking about has been a reaction more to the rhetoric than to actual policy. That is a concern to us.”

Concerning DOE, a second staff member for the committee majority noted USCIA lacks substantive guidance for the department but that the Senate Energy and Natural Resources Committee has been developing legislation using the DOE Office of Science provisions crafted by the Science Committee as a starting point.

Asked about the rationale behind the funding targets in the COMPETES Act, the first staff member contrasted it with a prior emphasis on doubling agency budgets that informed legislation such as the 2007 COMPETES Act.

“We worked very hard to propose growth paths for these agencies that would accommodate the increased activities that we were authorizing for them," the staff member said, explaining, "These are real numbers that we put into our bills, it wasn't just ‘we're going to double [the budget] in five years.’”