The House has revealed its response to the landmark innovation policy package the Senate passed last year, a major step toward negotiating a compromise version. However, there are a host of thorny policy disagreements yet to be resolved. 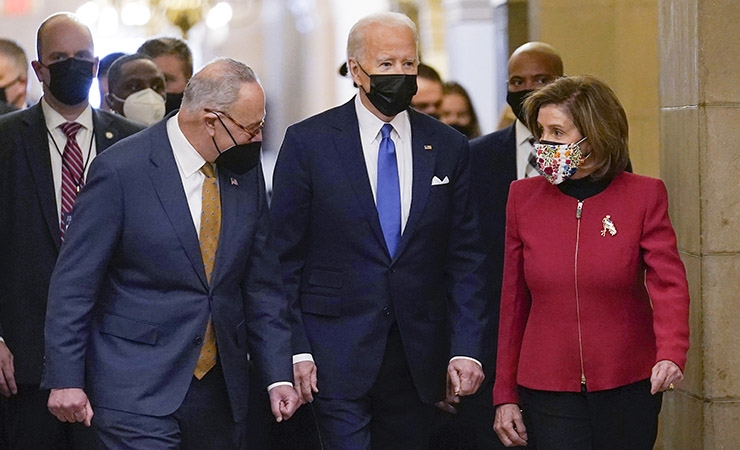 On Jan. 25, House Democrats unveiled a legislative package called the America COMPETES Act of 2022, their long-awaited full response to the U.S. Innovation and Competition Act (USICA), which the Senate passed in June. The legislation would establish new innovation initiatives and set funding targets that, if met, would add billions of dollars to the current annual budgets of selected research agencies.

USICA and the COMPETES Act share certain core proposals, such as establishing a new National Science Foundation directorate and a program to seed regional innovation hubs across the country. In addition, both would directly appropriate $52 billion for semiconductor production and R&D initiatives that were authorized last year, and both include extensive provisions bearing on trade policy and foreign relations.

The COMPETES Act also contains many provisions that have no counterpart in USICA, such as ones that would support climate change mitigation efforts abroad and remove caps on green cards for doctoral graduates in STEM fields. If the bill passes, its substantial differences with USICA are set to be addressed by a House-Senate conference committee.

President Biden has called for Congress to send him a final version “as soon as possible,” and the House is poised to move quickly, setting tomorrow as a deadline for members to propose amendments prior to floor debate. A section-by-section summary of the bill is posted here.

The House Science Committee assembled the core innovation provisions in the COMPETES Act last spring and summer. Whereas the Senate’s development of USICA focused on channeling funding toward “key technology areas,” the committee embedded its new initiatives within thoroughgoing policy updates for three agencies: NSF, the Department of Energy Office of Science, and the National Institute of Standards and Technology. The House ultimately passed the NSF and DOE bills with large bipartisan margins.

The House’s NSF provisions recommend that Congress ramp up the agency’s topline budget from its current $8.5 billion level to $17.9 billion over five years, cumulatively providing $35.6 billion in additional funding over that period. The new directorate’s budget would start out at $1.4 billion and ramp up to $3.4 billion, totalling almost $13.3 billion over the five years, whereas USICA envisions providing the directorate with a total of $29 billion over that period.

There have also been substantial philosophical differences between the Senate and the House Science Committee over the new directorate, with the latter proposing it focus on addressing “societal challenges” that include but are not limited to work on strategic technologies. Accordingly, the COMPETES Act refers to the new entity as the Science and Engineering Solutions Directorate, whereas USICA calls it the Technology and Innovation Directorate. In its own proposal, the Biden administration has called it the Technology, Innovation, and Partnerships Directorate.

The Science Committee’s legislation also focuses more on building up NSF as a whole and includes extensive direction for existing programs, addressing areas such as STEM education and broadening participation in STEM fields among underrepresented groups.

Provisions for the DOE Office of Science would recommend that Congress ramp up the office’s annual budget from $7.0 billion to $11.1 billion, adding a cumulative $15.3 billion over five years, close to the $17 billion USICA would recommend for DOE. As with NSF, the COMPETES Act also provides extensive direction for the office across its programs, with focal points in areas such as quantum information science, high-intensity lasers, and fusion energy R&D. The Senate has as yet not proposed any policy direction for the Office of Science.

The House provisions for NIST would recommend that Congress immediately increase its $1 billion budget to $1.4 billion and ramp it up to almost $1.8 billion over five years, providing about $2.8 billion cumulatively in additional funds. The increased funding would be distributed across research programs, industrial services programs, and facilities construction and maintenance.

USICA does not include a funding recommendation or extensive policy direction for NIST. It does, though, address some agencies unmentioned in the House bill, incorporating a sweeping policy update for NASA and recommending that Congress immediately double the Defense Advanced Research Projects Agency’s budget, which would amount to an additional $17.5 billion over five years.

The COMPETES Act and USICA would both establish a grant program within the Commerce Department for funding consortia of state and local governments, universities, businesses, and other entities to develop and implement regional innovation strategies. USICA would set a $10 billion funding target for the program over five years, whereas the COMPETES Act proposes about $7 billion for regional programs.

Importantly, congressional funding recommendations (i.e., “authorizations”) are not binding. For example, Congress did not come close to meeting ambitious targets set out in two major innovation policy laws, the America COMPETES Acts of 2007 and 2010. 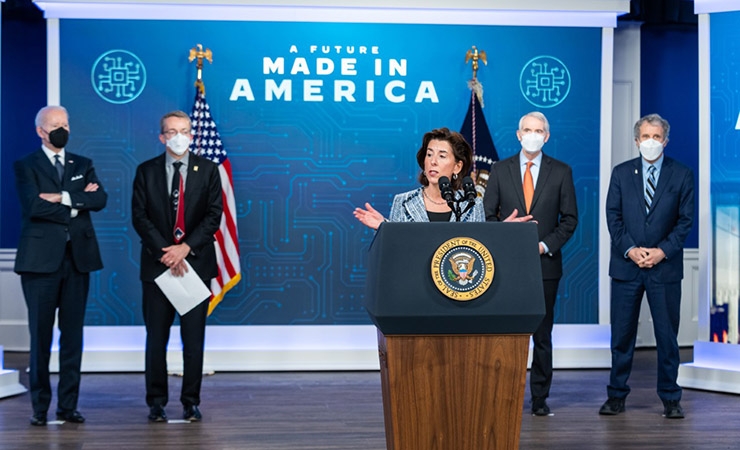 Commerce Secretary Gina Raimondo speaks at a White House event on Jan. 21 to mark Intel’s decision to spend $20 billion on a new microchip production complex near Columbus, Ohio. Behind her, from left, are President Biden, Intel CEO Patrick Gelsinger, and Sens. Rob Portman (R-OH) and Sherrod Brown (D-OH). Raimondo has been the Biden administration’s lead advocate for securing funding for semiconductor industry incentives.

Whereas most provisions in the COMPETES Act and USICA only recommend appropriate funding levels, both bills would actually provide $52 billion over five years for implementation of the CHIPS for America Act, which was enacted as part of the National Defense Authorization Act for Fiscal Year 2021. This funding includes:

The COMPETES Act also supplements the policy provisions in the CHIPS Act with new ones that would direct DOE to establish up to four Microelectronics Science Research Centers, each with a target budget of up to $25 million annually. In addition, it would provide the Commerce Department with various authorities, including to offer higher pay rates to certain technical employees and to make loan guarantees to semiconductor firms.

Separate from the CHIPS Act appropriations, both bills further include $1.5 billion for the Commerce Department to promote the development and deployment of 5G telecommunications technologies that use open standards.

Aside from the aforementioned differences between the bills, there are a host of thorny policy differences that will likewise need to be worked out, such as:

Research capacity-building. USCIA proposes a massive expansion of the NSF’s and DOE’s EPSCoR programs, which set aside funds for states and territories that have historically received a low share of total agency R&D funds, with the aim of building up their research capacity. In contrast, the COMPETES Act proposes creating programs to build capacity at institutions outside the top tier, regardless of where they are located.

Research security. Both bills include a suite of provisions aimed at preventing foreign governments from exploiting the U.S. research system. For instance, USICA would bar federal grantees from participating in any talent recruitment program supported by China, Russia, Iran, or North Korea, whereas the COMPETES Act limits the ban to programs with “malign” intent. Both bills would also lower the threshold on the value of foreign gifts and contracts that universities are required to disclose and would create a new reporting requirement for foreign funds received by individual faculty, though the COMPETES Act sets higher thresholds.

Investment reviews. USICA proposes to establish a process through the Committee on Foreign Investment in the U.S. (CFIUS) to block universities from accepting certain foreign gifts and contracts if they are deemed a threat to national security. The COMPETES Act does not contain such a provision, but would establish a mechanism analogous to CFIUS for blocking U.S. companies and other entities from making investments abroad in certain critical sectors. Both ideas have faced pushback, with critics arguing they would be difficult to implement and would unduly inhibit beneficial activities.

Immigration. The COMPETES Act’s proposal to provide STEM doctoral graduates with a fast track to receiving employment visas — colloquially referred to as “stapling a green card” to STEM diplomas — is an idea that has long circulated among science and innovation advocates. The COMPETES Act would also create an entirely new visa category for immigrant entrepreneurs. USICA includes no analogous immigration provisions, and recent attempts to pass immigration legislation have generally become deadlocked within efforts to enact comprehensive policy reforms.

While Democratic committee leaders have emphasized the number of bipartisan ideas included in the COMPETES Act, House Republicans immediately protested that they were not consulted about many provisions. Some of the more controversial points are tangential to the bill’s innovation policy elements, such as a number of its trade provisions and its minimum-wage requirements for construction projects.

In a statement, Republicans on the Science Committee complained the broader package is filled with “poison pills” that undermine the bipartisan work on its portions. Republicans on the Foreign Affairs Committee have also argued that the bill lacks “meaningful export-control policies” to curb the Chinese government’s ability to acquire critical technologies, and they object to the bill's proposed contributions to the UN's Green Climate Fund.