In the early morning hours of Dec. 5, the National Ignition Facility (NIF) at Lawrence Livermore National Lab performed a nuclear fusion experiment in which a split-second 2.05-megajoule laser shot yielded 3.15 megajoules of energy output. It was the first time a net energy gain had ever been obtained through fusion outside a thermonuclear detonation.

NIF is the world’s highest-energy laser facility, focusing 192 beams onto a millimeter-scale hydrogen fuel target. Its primary purpose is to produce data that helps the Department of Energy’s National Nuclear Security Administration verify the integrity of aging nuclear warheads without explosive testing. While net energy gain, or “ignition,” is the facility’s namesake goal, doubts had arisen over whether it would ever achieve the feat.

At a Dec. 13 press event, the result was celebrated by Energy Secretary Jennifer Granholm, President Biden’s science adviser Arati Prabhakar, NNSA Administrator Jill Hruby, NNSA weapons program head Marv Adams, and Livermore Director Kim Budil. They uniformly stressed the decades of effort behind the achievement, while Budil estimated that decades of additional work would be needed to use the same method for practical energy generation.

Perseverance seen as key to ignition

The idea of laser-driven fusion was first proposed by John Nuckolls and other Livermore researchers in the 1960s, and speakers at the event stressed the perseverance needed to see it through to ignition.

Prabhakar reflected that she briefly worked on laser fusion when, as a college student, she spent a summer at Livermore in 1978 before moving in other directions. “But the people I worked with, and their successors, kept going,” she said. “And they went through periods of triumph, and they went through tremendous struggles and setbacks. … It took not just one generation, but generations, of people pursuing this goal.”

DOE first requested funding for NIF in the mid-1990s, expecting it to cost about $1 billion, but that figure ultimately rose to around $3.5 billion. Then, after operations began in 2009, the facility’s first rounds of experiments failed to approach a net energy gain. In 2015, an NNSA review determined that it was unclear whether ignition was even possible at NIF.

Budil recalled criticisms of the facility, remarking, “Many said it was not possible. The laser wasn’t energetic enough. The targets would never be precise enough. Our modeling and simulation tools were just not up to the task of this complex physics.”

She added that in August 2021, when NIF shattered its previous records with an experiment yielding 1.35 megajoules, “many took notice.”

Experiments undertaken in the months following that shot proved disappointing. But after that campaign concluded, NIF increased the energy of its lasers, adjusted how they are fired, and improved fuel target design. A panel of NIF staff members at the press event recounted that, after the most recent experiment campaign began in September, further refinements in experiment design led to this week’s successful shot.

NIF’s immediate next steps will be to try to make ignition shots repeatable and to further increase the energy gain. Michael Stadermann, the facility’s target fabrication program manager, observed that the target used in the ignition shot was known to have flaws, meaning it may be possible to quickly achieve a greater energy yield using a higher-quality target.

In addition to building on the scientific achievement of ignition, follow-on experiments will be applied to NNSA’s Stockpile Stewardship Program, which uses a variety of scientific methods to certify the viability of nuclear warheads.

Hruby reflected on a commemoration she attended of the 30th anniversary of the last explosive U.S. nuclear weapons test. “I spoke of how far our stockpile stewardship program has come and in how many ways we now understand our nuclear weapons better than we did when we were testing,” she said. “Unlocking ignition at NIF will allow us to probe the extreme conditions found at the center of nuclear explosions and address significant longstanding stewardship questions.”

Senior Livermore official and former NIF director Mark Herrmann said during the technical panel that researchers actually used the ignition shot to expose materials to the intense neutron flux from the fusion reaction, marking the first time the facility had done that.

Adams stressed that, beyond its direct applicability to warhead stewardship, simply achieving ignition demonstrates the credibility of stewardship methods, which he argued helps to deter rivals and reassure allies. 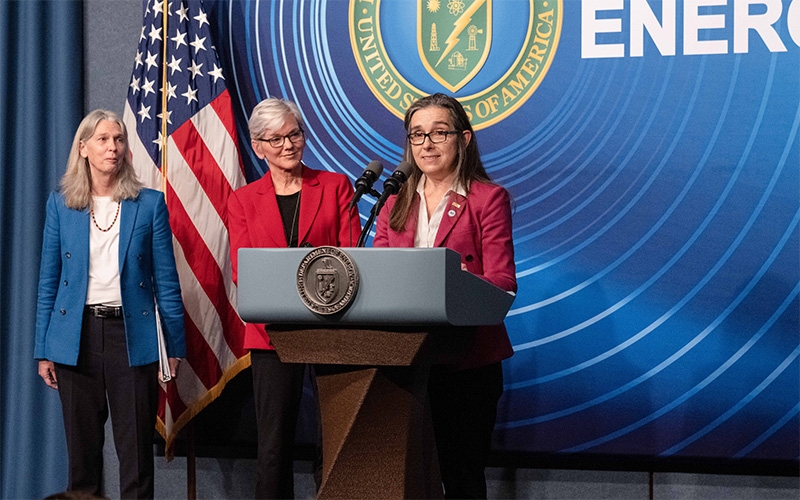 All the speakers were careful to avoid implying that achieving ignition opens a simple pathway to generating energy for practical use.

Unlike nuclear fission, which becomes self-sustaining when it achieves criticality, maintaining ignition would require a continual input of energy. Because NIF’s lasers themselves require about 300 megajoules of electricity to produce each two-megajoule shot, the overall energy budget of the ignition shot still fell far short of breaking even.

However, Budil did not foreclose the possibility of practical laser fusion. “Our calculation suggests that it’s possible with a laser system at scale to achieve hundreds of megajoules of yield. So, there is a pathway to a target that produces enough yield, but we’re very distant from that right now,” she said.

Estimating how far off such a prospect might be, she ventured, “Probably decades — not six decades, I don’t think, not five decades, which is what we used to say. I think it’s moving into the foreground and probably, with concerted effort of investment, a few decades of research on the underlying technologies could put us in a position to build a power plant.”

Budil also outlined potential steps toward that goal, observing, “The NIF is built foundationally on 1980s laser technology. So, you know, we need to bring modern technology approaches to the [fusion] drivers. We need to think about all the systems questions. And now that we have a capsule that ignites, we need to figure out, can we make it simpler? Can we begin to make this process easier and more repeatable? Can we begin to do it more than one time a day?”

Laser fusion is the first approach to fusion energy to clear the ignition threshold, but approaches that use magnetic fields to confine ultra-hot plasmas are believed to have a less forbidding pathway to practical energy generation.

Venture capitalists are starting to invest heavily in magnetic confinement fusion, and the bipartisan Energy Act of 2020 made it a national goal to drive quickly toward a pilot power plant. This past spring, the Biden administration declared a “bold decadal vision” to realize and commercialize fusion energy and DOE is now targeting the 2030s for both a pilot plant and commercial deployment.

Although magnetic confinement will be the most immediate focus for energy generation, the Energy Act directed DOE’s Fusion Energy Sciences program to also support research on inertial fusion, a category encompassing laser fusion, with an initial annual funding target of $25 million. By comparison, NNSA currently spends $580 million per year on inertial fusion for stockpile stewardship.

DOE is moving more slowly than the Energy Act’s vision, requesting $3 million for inertial fusion energy in fiscal year 2023, but it also sponsored a “basic research needs” workshop this past summer to identify promising opportunities for grant funding. Fusion energy is expected to receive a higher priority in the Biden administration’s fiscal year 2024 budget request, which is due in February.

Rep. Zoe Lofgren (D-CA), a longtime champion of NIF whose district neighbors Livermore, called the ignition milestone a “very big deal,” stating, “Congress and the administration need to fully fund and properly implement the fusion research provisions in the recent CHIPS and Science Act and likely more.” Lofgren is a high-ranking member of the House Democratic caucus and is the front-runner to succeed Johnson as the Science Committee’s top Democrat.

While inertial and magnetic confinement fusion are apt to continue developing along parallel tracks, fusion proponents are eager for both to progress.

Asked about the relationship between the approaches during the technical panel, Tammy Ma, who leads Livermore’s Inertial Fusion Energy Initiative, remarked, “There’s different technology developments that need to occur,” while observing there are also “commonalities” in areas such as the physics of burning plasmas and material science.

“We’re very supportive of each other in this community. A win for either inertial or magnetic confinement is a win for all of us, and we really just want to see fusion energy happen,” she said.