The National Institutes of Health received a $2 billion base-budget increase for fiscal 2022 as well as $1 billion to launch ARPA–H, a new agency designed to accelerate biomedical innovation. In fiscal year 2023, the Biden administration is seeking to ramp up funding for ARPA–H to $5 billion while leaving budgets for many other parts of NIH near their current levels. 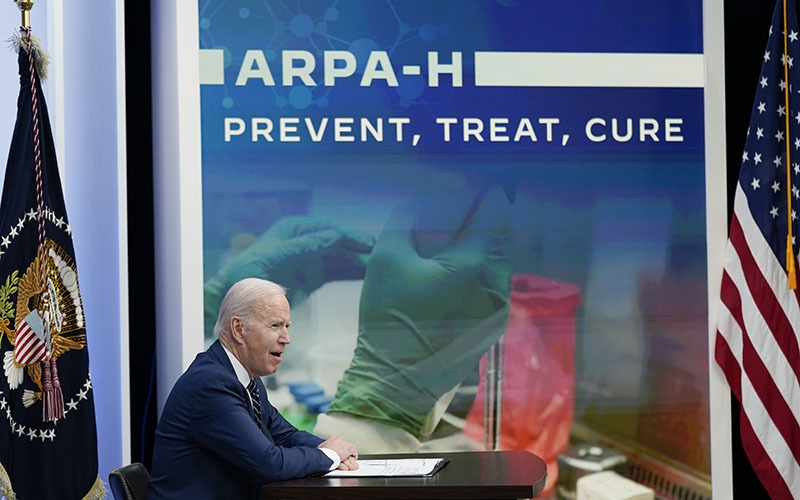 In its fiscal year 2022 appropriation for the National Institutes of Health, Congress increased the agency’s base budget by $2 billion to $45 billion, marking the seventh year in a row it has received a multi-billion-dollar budget increase. The increase is distributed across NIH’s 27 institutes and centers, with each receiving a boost of at least 3%. In addition, Congress provided $1 billion outside of NIH to establish the Advanced Research Projects Agency for Health, an initiative proposed by President Biden to drive forward high-risk, high-reward research.

Exercising an option in the appropriation, the Biden administration has transferred ARPA–H’s budget into NIH, though the new agency will not report to the NIH director. In its fiscal year 2023 budget request, the administration seeks $49 billion for NIH as a whole, including $5 billion for ARPA–H, which would leave funding for most of NIH’s Institutes and Centers near their current levels. However, outside of NIH’s ordinary budget, the request includes an additional $12 billion in multiyear one-time funding to support pandemic preparedness activities.

Detailed congressional direction for fiscal year 2022 is included in an explanatory statement accompanying the appropriations legislation, as well as in a report prepared by House appropriators. Summary figures for the appropriation and the request are compiled in FYI’s Federal Science Budget Tracker.

President Biden originally proposed creating ARPA–H in his campaign platform and sought $6.5 billion to launch it in his first budget request. The proposal garnered broad bipartisan support in Congress, but there has been some dissent over the agency’s structure and funding level.

House and Senate appropriators initially put forward spending proposals that included several billion dollars for ARPA–H but made the funding contingent on Congress passing separate legislation establishing the agency. While several such bills have been introduced, none have been passed by either chamber. Congress ultimately provided a smaller sum of $1 billion to get ARPA–H started as debate continues over the authorization legislation.

In its appropriation, Congress skirted the issue by granting the Department of Health and Human Services authority to transfer the ARPA–H funds to NIH or another agency within the department. On March 31, HHS Secretary Xavier Becerra announced he would transfer the funds to NIH but that the ARPA–H director will report directly to him. “What we're hoping to do is show that there will be autonomy,” Becerra said during a House Appropriations Committee hearing later that day.

He continued, “To be able to get up and running, we don't want them to worry about who's going to run human resources instead of who's going to come up with the next innovation. We wanted to be able to pull on those assets, that infrastructure that's already in place.”

He added that while ARPA–H will be administratively part of NIH, it will not be physically located on NIH’s campus in Bethesda, Maryland, which is just outside Washington, D.C. The Senate Health Committee has assembled a bill that proposes to establish ARPA–H within NIH but stipulates that its headquarters cannot be located “inside of, or in close proximity to, the National Capital region.”

Former NIH Director Francis Collins, who was recently named interim science adviser to President Biden, said in an interview in March that a director for ARPA–H could be appointed in just “a couple of months” and that names were already “kicking around.” The administration’s budget request states that the director will serve a single term of five years, asserting that rotating the position will help keep the agency “vibrant.”

The administration proposes that funds for ARPA–H be made available for three years to provide flexibility while the agency is in a “phase of rapid launch and expansion.” It also asks that Congress grant ARPA–H special hiring authorities similar to those of DARPA in order to “recruit, attract with competitive pay, and quickly hire” program managers with set terms of employment. Describing the agency’s anticipated approach to project management and expected focus areas, the request states,

ARPA–H will leverage novel public-private partnerships, use directive approaches that will provide quick funding decisions to support projects that are results-driven and time-limited, and identify emergent opportunities through advanced systematic horizon scans of academic and industry efforts.

Potential areas of transformative research driven by ARPA–H include development and implementation of accurate, wearable, ambulatory blood pressure technology, preparation of mRNA vaccines against common forms of cancer, or accelerating development of efficient gene/drug delivery systems to target any organ, tissue, or cell type — a zip code for the human body. Opportunities or obstacles identified by the Cancer Moonshot may become candidates for the new approach to transformational change offered by ARPA–H.

The request further notes the agency should “expect that a significant fraction of its efforts will fail” and that it should adopt an approach to risk “similar to DARPA’s ‘Heilmeier Catechism,’ a set of principles that assesses the challenge, approach, relevance, risk, duration, and metrics of success.” It also clarifies that ARPA–H will serve a much broader range of stakeholders than DARPA and will “need to create breakthrough innovations that serve an entire ecosystem and all populations.”

Appropriators have expressed concern that the administration’s budget request for ARPA–H dominated its request for NIH as a whole. At a hearing on the request, House Appropriations Committee Chair Rosa DeLauro (D-CT) remarked that “the proposed increase of only $274 million for the rest of the National Institutes of Health is insufficient and threatens the progress this committee has made in the past several years through significant sustained investments in biomedical research.”

The lead Republican appropriator for NIH in the House, Rep. Tom Cole (R-OK), echoed that sentiment. “I think it's a mistake to shift funding away from basic biomedical research into a brand-new program in one year. ARPA–H will take time to get up and running and take time to work out the many controversial issues I know this new agency will face,” he said.

Climate change. In fiscal year 2022, the administration requested $100 million in new funds for research on the health impacts of climate change through the National Institute for Environmental Health Sciences, as well as an additional $100 million for the Climate and Health program at the Centers for Disease Control and Prevention. The final appropriation only provides $10 million for the CDC program and a $27 million increase for the National Institute for Environmental Health Sciences, without specifying an amount for climate research. The administration repeats the proposals for fiscal year 2023.

Harassment. The fiscal year 2022 appropriations legislation mandates that NIH require grantee institutions to notify the agency when key personnel are “removed from their position or are otherwise disciplined due to concerns about harassment, bullying, retaliation, or hostile working conditions.” The provision is motivated by frustrations from House and Senate appropriators that NIH did not implement previous congressional direction to establish such a notification requirement. The agency maintained it did not have the legal authority to do so and says it will now “move expeditiously” to implement new requirements in accordance with the provision.

Workforce diversity. Funding for NIH’s scientific workforce diversity office is increasing from $6 million to $16 million, short of the $22 million requested. The office leads the recently launched UNITE initiative, which seeks to advance racial equity in the biomedical research workforce. The administration again requests an increase to $22 million for fiscal year 2023.

Foreign influence. Congress is providing $2.5 million for efforts by NIH’s Office of Extramural Research to “expeditiously complete foreign influence investigations” and directs the agency to provide biannual updates on their progress. Such investigations began in June 2018 and have focused on uncovering instances where NIH-funded researchers have maintained undisclosed ties to foreign institutions. As of this March, the office had contacted institutions concerning 232 cases, of which 97 resulted in the scientist in question resigning or being fired and three resulted in criminal convictions.

Infrastructure modernization. Funding for NIH’s core Buildings and Facilities account is increasing by $50 million to $250 million for fiscal year 2022, meeting the administration’s request. However, Congress rejected the administration’s proposal to allow NIH to transfer up to 1% of the appropriations for its Institutes and Centers into the account to help address a maintenance backlog that exceeds $2 billion. Instead, Congress is increasing the amount of funding Institutes and Centers can use for repairs and improvements from $45 million to $100 million and raising the cap per project from $3.5 million to $5 million. For fiscal year 2023, the administration requests $300 million for the base Buildings and Facilities account and repeats the proposal to transfer up to 1% of its Institutes and Centers appropriations to facilities maintenance projects.