Presumptive Democratic presidential nominee Joe Biden has proposed to spend hundreds of billions on R&D as part of his economic and climate policy platforms. His selection of Sen. Kamala Harris (D-CA) as his running mate will likely further center environmental justice and diversity considerations in his science and technology agenda. 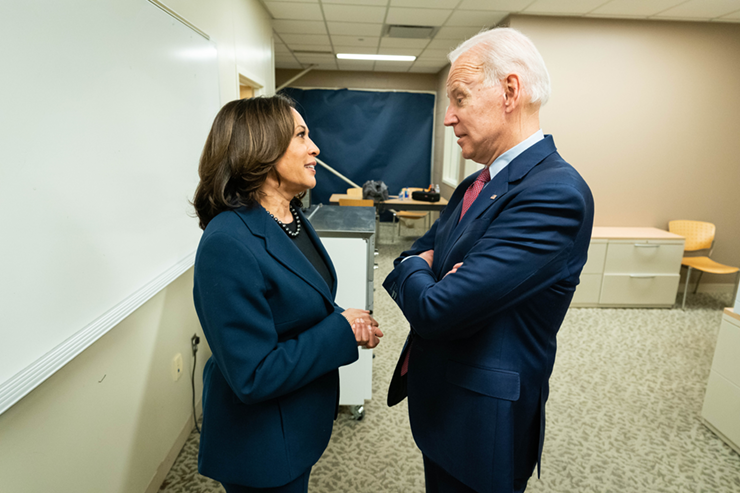 Joe Biden, the presumptive Democratic presidential nominee, has rolled out campaign proposals over the past month that include major increases in federal R&D spending, with a focus on clean energy and emerging technologies. His Made in All of America initiative to foster new manufacturing jobs specifically calls for spending $300 billion on R&D over four years, while his $1.7 trillion energy infrastructure-focused climate plan involves spending $400 billion over ten years to make “the largest-ever investment in clean energy research.”

While Biden’s plans would make radical changes in current R&D spending levels, in Congress there is also a burgeoning interest among lawmakers in both parties in significantly increasing R&D spending to benefit certain technology areas. Bipartisan support for such increases could dissipate under a Biden administration, particularly given likely Republican opposition to the tax increases he has proposed to pay for his plans. However, if Democrats gain control of Congress they could decide to abolish the Senate filibuster to push legislation through. This summer, Biden expressed openness to that idea in view of what he described as a need to pursue “systemic change,” and his new running mate Sen. Kamala Harris (D-CA) said last year she supports eliminating the filibuster to make progress on climate change.

What role Harris might take in science policy remains to be defined. Although she has not established a deep track record in the area during her nearly four years in the Senate, she has backed pandemic relief for researchers and sponsored legislation to combat harassment and promote diversity in STEM fields. She has also taken up the cause of environmental justice, which is likewise a feature of Biden’s climate plan.

Biden first outlined the Made in All of America plan in a July 9 speech at a metalworks plant in Dunmore, Pennsylvania. Alongside a $400 billion investment in the production of U.S.-made products, he said the $300 billion for R&D would be used to “sharpen Americans’ competitive edge in the new industries where global leadership is up for grabs, like battery technology, artificial intelligence, biotechnology, clean energy.”

He cited rising competition from China as a major motivation for such spending, saying, “The Chinese are spending multiple billions of dollars trying to own the technology of the future while we sit with our thumb in our ear.”

The full text of the plan mentions several additional priority research areas, including advanced materials, health, aerospace, automotive technology, and telecommunications. It indicates the money would go toward ramping up the budgets of agencies such as the National Institutes of Health, National Science Foundation, and Department of Energy, as well as creating an Advanced Research Projects Agency for Health. It also calls for increasing capital financing through a “scaled-up” version of the multiagency Small Business Innovation Research program.

Aiming to ensure such investments produce equitable outcomes, the plan proposes to recapture a portion of the royalties from inventions arising from federally funded research, implement employee protections against negative consequences of new workplace technologies, and distribute funding more broadly across regions and demographic groups. For instance, it states Biden would apply the principles of the “10-20-30” formula proposed by House Majority Whip Jim Clyburn (D-SC), which calls for making 10% of rural development investments in counties where 20% or more of the population has lived below the poverty line for the last 30 years.

Other proposals focus on supporting Historically Black Colleges and Universities, Tribal Colleges and Universities, and other Minority Serving Institutions. They include a $35 billion initiative to create “research centers of excellence” and technology laboratories at such institutions and to strengthen their graduate programs in STEM and other fields.

In his speech, Biden drew a link between his proposed R&D investments and equity concerns, stating that “this money will be used purposefully to ensure all of America is in on the deal, including communities that historically have been left out: Black, Brown, and Native American entrepreneurs; cities and towns everywhere in the region and the country.”

Biden’s climate plan sets a target of the U.S. reaching net-zero emissions by no later than 2050 through a combination of R&D and infrastructure investments, emissions reduction regulations, and plans to transition workforces in communities reliant on coal, among other means.

One plank involves establishing a “cross-agency” entity called ARPA-C that would focus on developing “game-changing” clean energy technologies such as grid-scale energy storage, small modular nuclear reactors, and carbon capture and storage methods. Detailing research areas ARPA–C would support, the plan quotes nearly verbatim from testimony by Arun Majumdar, the first director of the Advanced Research Projects Agency–Energy, at a 2019 congressional hearing on the prospect of ramping up that agency’s funding. It also states the new agency would help “identify the future of nuclear energy” by supporting research on topics such as reactor safety and waste disposal.

More broadly, the plan maintains such R&D spending will help “create the industries of the future” and produce new jobs in the clean energy sector. Notably, the Trump administration often uses the “industries of the future” phrase to signify artificial intelligence, quantum science, 5G telecommunications, advanced manufacturing, and biotechnology, but not in the context of combating climate change.

Biden’s plan states the U.S. would reenter the 2015 Paris climate agreement on the first day of his administration and later convene a world summit to secure emissions reduction pledges “above and beyond” existing commitments. He would also seek to reinvigorate Mission Innovation, a clean energy technology initiative associated with the Paris agreement, by encouraging countries to quadruple their financial commitments to it. The plan also indicates Biden would work to build on a 2014 U.S.–China climate agreement by making future bilateral deals contingent on China eliminating export subsidies for coal and other high-emissions technologies.

Biden’s campaign proposals are complemented by a report assembled by a committee tasked with unifying the Democratic party on an array of issues, including climate change. Like Biden’s climate plan, the report proposes R&D investments as well as “moonshot” technology efforts. It also outlines measures to advance environmental justice, such as establishing a council of community leaders to inform climate change policies and programs.

Joining Biden’s campaign yesterday, Harris is the first Black woman and first person of South Asian descent to be on a major party’s presidential ticket. Harris is also the first to have graduated from a Historically Black College or University, Howard University, and in her own presidential campaign she proposed investing $60 billion in STEM research and education at HBCUs and other Minority Serving Institutions. Harris’ mother Shyamala Gopalan was a cancer researcher who moved to the U.S. from India to pursue her graduate education at the University of California, Berkeley, and Harris frequently cites her influence when advocating for the sciences.

As California’s attorney general and in the Senate, Harris has made environmental issues a focal point. Last year, she debuted a draft of a climate equity bill with Rep. Alexandria Ocasio-Cortez (D-NY) that they formally introduced in the House and Senate last week. The legislation would require environmental legislation to receive an “equity score” and create an environmental justice office within the White House tasked with considering the impacts of regulatory proposals on low-income communities. She is also the Senate’s lead sponsor of the Environmental Justice for All Act, which was also introduced last week and seeks to enhance protections for vulnerable communities against environmental harms.

Harris has similarly focused on social issues in STEM. She is the lead Senate sponsor of legislation that would establish a Department of Education grant program to support STEM education activities for girls and underrepresented minorities at the elementary and secondary school levels. She is also the lead Senate sponsor of the Combating Sexual Harassment in STEM Act, which would require research institutions to report harassment-related actions taken against grantees back to their funding agencies. Introducing the bill in 2019, she remarked in a statement, “As the daughter of a barrier-breaking woman in STEM research, I know the importance of ensuring more women enter and excel in this field.”