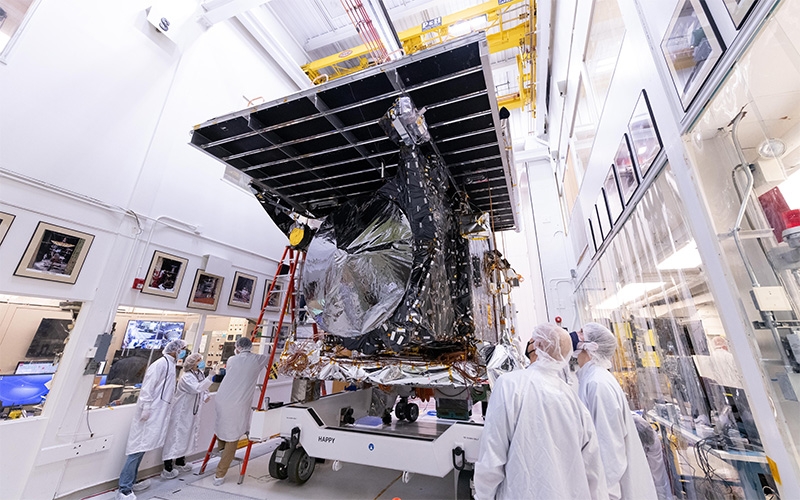 An independent review board (IRB) has concluded the failure of NASA’s Psyche mission to meet its launch schedule this past summer stemmed from factors beyond the proximate cause, late delivery of navigational software. It argues that understaffing and inadequate management oversight increased the risk of problems and that such organizational shortcomings exist across Caltech’s Jet Propulsion Laboratory, the NASA center managing the project.

The board warns that, absent resolution, these issues could lead to failures in other parts of JPL’s portfolio, which currently encompasses pre-launch work on six major projects, including two flagship missions: Europa Clipper and Mars Sample Return. To alleviate staff shortages on Psyche and across the laboratory, NASA has decided it will push back the target launch date for VERITAS, a JPL-managed Venus orbiter, from December 2027 to “no earlier than 2031.”

While the IRB could have recommended that NASA terminate Psyche, the agency is now targeting a launch in October 2023, which the board agrees is achievable. The spacecraft will, though, follow a less favorable trajectory to its namesake destination, the asteroid 16 Psyche, delaying its arrival from 2026 to 2029.

Psyche was one of two asteroid missions NASA initiated in 2017 through its Discovery program, which competitively selects planetary science projects that have relatively low costs. The asteroid 16 Psyche is unusual in that it has high metal content, and the Psyche spacecraft will be the first to extensively investigate such a body, with the hope it will yield insight into the early history of the Solar System.

The IRB was chaired by Tom Young, a former NASA official and aerospace industry executive who has led similar review panels, including one that investigated problems afflicting development of the James Webb Space Telescope in 2018. Presenting the board’s findings at a NASA town hall meeting on Nov. 4, he stressed that, while mission team members identified engineering problems in time to address them, their concerns did not reach Psyche or JPL leadership quickly enough.

Lindy Elkins-Tanton, the head of the Psyche mission, is an advocate for building teams based on collaborative approaches and common goals rather than top-down decision-making, and has pointed to the 800-member Psyche team as illustrative of such an approach. “I’m attempting to be a servant-leader,” she wrote in the journal Issues in Science and Technology last year.

The IRB report credits Elkins-Tanton with setting a “commendable tone of collaboration,” but it concludes staff members who raised alarms did not feel their concerns were acted on across “multiple levels of management,” while line personnel did not feel they had authority to solve problems. The report further suggests the mission had a culture in which one had to “prove” a problem existed before it would be addressed.

In addition, the report states there was not enough opportunity for informal communications or for project leaders to “walk the floor” to engage directly with workers, removing an important “safety net” for catching problems. The report cites the use of remote-work arrangements instituted during the pandemic as inhibiting the flow of information among staff members, but it refrains from attributing the project’s problems principally to pandemic conditions.

The board instead draws a direct line between Psyche’s problems and staffing limitations across JPL, noting, “JPL’s current development flight project workload is the broadest and most demanding in the history of the laboratory.”

In general, the report observes there has been a “significant erosion of technical acumen” among JPL personnel responsible for overseeing projects and that senior lab leaders’ attention was diluted across too many projects to sufficiently probe progress on Psyche.

On the Psyche team itself, the report concludes there were too many inexperienced managers on the project and it had left certain key positions unfilled, including chief engineer. Its workforce also suffered from a lack of mentoring and a high rate of personnel turnover.

“Team members experienced the normalization of deviance with respect to understaffing, high stress, inadequate scheduling, and pushback against worker intuition,” the report states.

Stressing the gravity of the situation, Young said at the town hall that the risks the IRB identified exist across JPL. “It’s hard to overemphasize how important the correction of these issues is from an urgency standpoint. They’re acute today, and failure to act — which I don’t expect, by the way — will clearly result in more ‘Psyches’ and potentially in-flight failures,” he remarked.

JPL Director Laurie Leshin, who took up her position in May, said in her own remarks that the laboratory is already implementing the IRB’s recommendations. She reported for instance that JPL is rethinking how its hybrid work environment operates, calling the board’s point about informal communications being a safety net a “real lightning-bolt moment.” However, she said she might “slightly” disagree about the importance of the pandemic, noting that Psyche has been built almost entirely during it.

Concerning staffing levels, Leshin remarked, “We’re working these staffing challenges and opportunities at an incredibly high level at JPL and throughout our organization. We’re talking about it here in my office literally every day. … It’s not just about hiring. It’s about partnering more. It’s about thinking how we can collaborate across the space industry.”

NASA’s Office of Inspector General has previously flagged staffing strains at JPL during audits of projects such as the Surface Water and Ocean Topography mission and the Europa Clipper. The latter audit, released in 2019, observed that JPL was filling staff positions by transferring them from projects farther away from launch and criticized that approach as “robbing Peter to pay Paul.”

In addition to the Clipper, which is now two years from its expected launch, the new Mars Sample Return project is making increasingly heavy demands on JPL resources. Its annual budget increased from $242 million to $653 million this year and a further bump to above $800 million is on the horizon.

MSR’s mission architecture has also been in flux. NASA decided in March that a second Mars lander was needed to accommodate both MSR’s “fetch” rover, to be built by the European Space Agency, and an ascent vehicle. Then, in July NASA and ESA abandoned the rover, reverted to a single lander, and added two sample-retrieval helicopters to the mission.

In 2020, an IRB that NASA convened to ensure MSR was on a viable track reported that the agency should pursue a less ambitious schedule for the mission and increase its cost expectations. While the mission’s target launch date in 2028 now aligns with the board’s recommendations, its revised architecture has not as yet been scrutinized by an IRB, nor has NASA released an updated estimate of the total cost.

The weight of JPL’s current workload has followed from an expansion in the mission portfolio of NASA’s Planetary Science Division. Congress has enabled that expansion by more than doubling the division’s annual budget from about $1.4 billion in fiscal year 2015 to $3.1 billion today.

Notwithstanding the added funding, the sprawl of the division’s portfolio is straining budgets as much as staff. Atop the demands of flagship missions like MSR, the relatively economical projects in the division’s Discovery and New Frontiers programs have been growing more ambitious in recent years, pushing their costs upward. Psyche, for instance, was supposed to have cost about $500 million, excluding launch and operating costs, but the actual figure is about $800 million, not yet accounting for costs connected to the launch delay..

At the Nov. 4 town hall, Planetary Science Division Director Lori Glaze reflected that pandemic impacts, inflation, and supply-chain difficulties are further stressing budgets across the portfolio. She also noted that recent budgets have fallen short of the projections the division has been planning around, adding still more strain.

“We are looking to see how we balance all of those things going forward. The VERITAS delay is going to help address some of that in the near term, over the next three years or so, but we are going to be looking for longer-term solutions in that time period,” Glaze said.