People have been fascinated by alchemy since ancient times. Little did they know, however, their dreams to convert the lead into gold would one day result in breakthrough cures and unprecedented imaging capabilities for physicians.

This started becoming reality through the work of Irène Curie and Frédéric Joliot,who practically demonstrated conversion of one element into another through bombardment with alpha particles. 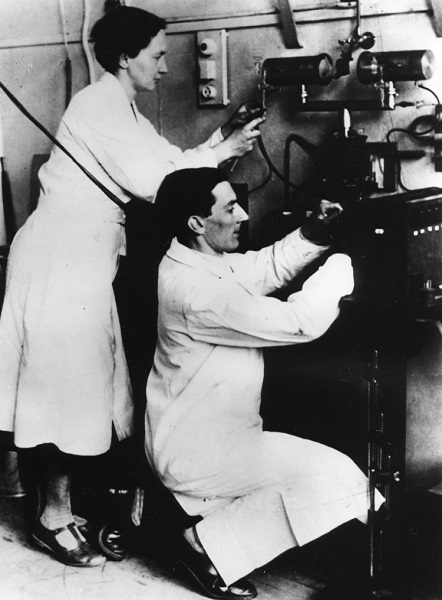 They made the conversion from boron to radioactive nitrogen, and from aluminium to radioactive isotopes of phosphorus to manifest the artificial preparation of isotopes that didn’t exist on Earth.

They existed only in a laboratory and lived only a few hours, before they decayed to the more stable elements releasing artificial radioactivity. The Joliot-Curies were awarded the Nobel Prize in Chemistry in 1935 “in recognition of their synthesis of new radioactive elements." 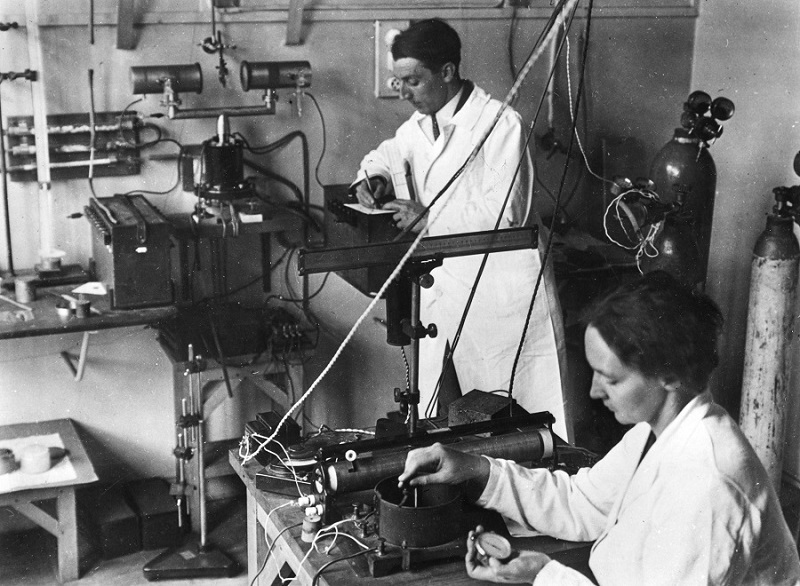 The publications related to the experiments and the synthesis of new isotopes are part of the Wenner Collection which is part of NBLA Special Collections and is in a process of being cataloged. Three of these articles are bound together in a tiny collection volume under the Accession number WE-20180431:

The ability to create isotopes on demand was considered a great breakthrough, however there was a need for a more reliable method that could produce new radioactive isotopes and elements. About the same time, in 1934, when the Joliot-Curies worked on their experiments, the Italian physicist Enrico Fermi conducted the first neutron irradiation which resulted in the first nuclear reaction by use of “slow neutrons." At that time, Fermi believed that he discovered new radioactive elements. He was awarded the 1938 Nobel Prize in Physics for this discovery, however, later it was determined that these were actually nuclear fission products.

Further extending the use of “slow neutrons," Fermi and his colleague Hungarian-American physicist Leó Szilárd designed and built the first controlled nuclear reactor that supports self-sustaining chain reaction. This groundbreaking process happened on December 2, 1942 at University of Chicago. 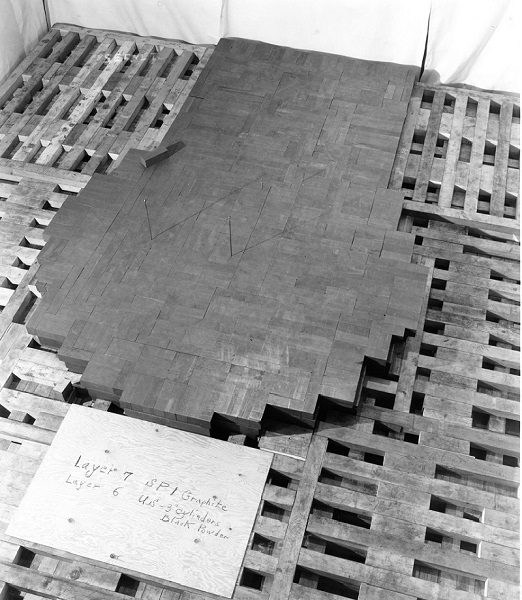 The reactor was simply a pile of interspersed graphite blocks and uranium oxide spheres. The team carefully kept increasing the amount of the uranium until the neutron flux reached critical level, after which the chain reaction became self-sustaining, releasing in the process a significant amount of thermal energy. This simple demonstration was the predecessor of the contemporary nuclear reactors which are used both for production of isotopes as well as for energy generation. 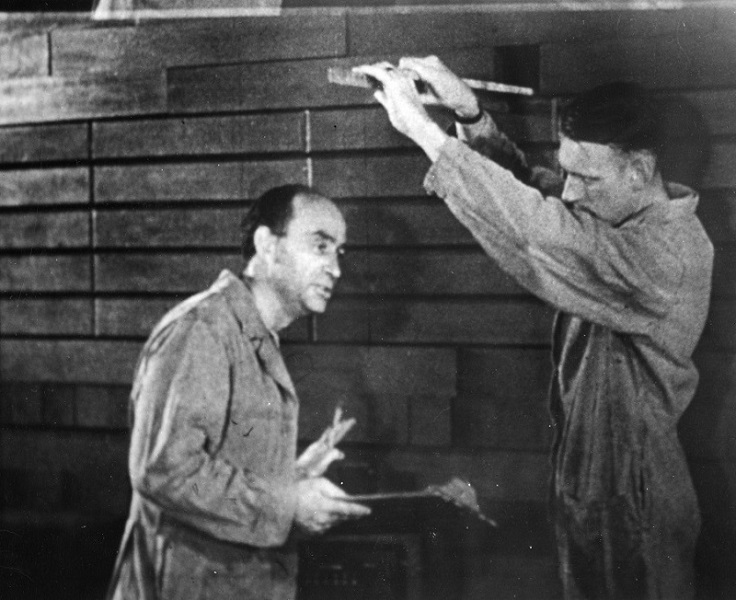 Two articles related to Fermi’s team experiments on neutron bombardment producing an induced radioactivity are part of the Wenner Collection:

With the developments in generator technology in the 1960s, the fission products from this controlled release of nuclear energy, like radioactive iodine I -131 and technetium 99m, can be found in applications in nuclear medicine that are used until today. I-131 has been used to study thyroid metabolism. In addition, it provided valuable insights in the insulin metabolism, and has been used to develop radioimmunoassays. Technetium radioisotope Tc99m is produced in a reactor from the fission-productMolybdenum Mo99 and is one of the most used isotopes in diagnostic nuclear imaging today.

Nuclear reactors are relatively big facilities that produce isotopes by neutron bombardment. While highly efficient, the energies achieved in them are insufficient for producing several other medically important isotopes, e.g.11C, 13N, 15O and 18F. These are beta particle emitters with short decay time used extensively in positron emission tomography (PET) studies. Those can be produced in a particle accelerator via proton bombardment.

When isotopes are intended for use with patients, it is important to consider the cost and the yield of the production. For some radionuclides, reactor use is the best route. However, for many other isotopes the cyclotron is indispensable.

The first cyclotron, which is a compact particle accelerator that can fit in a room, was constructed by Ernest Laurence and his student M. Stanley Livingston in 1930-1931. They had the first functioning device in the beginning of 1931. The first technology demonstration was 4.5” in diameter and used permanent magnets for trajectory confinement and radiofrequency electric field to accelerate protons toward a target. 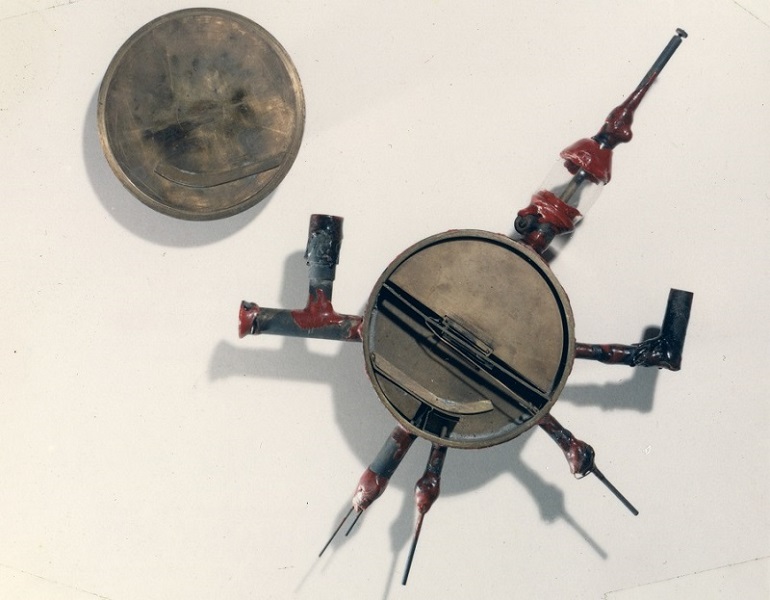 The small proof-of-principle device paved the way for significantly bigger practical devices that were several feet across and enabled relatively high production levels of isotopes. The increased size provided both higher intensity proton beams as well as higher isotope yields. 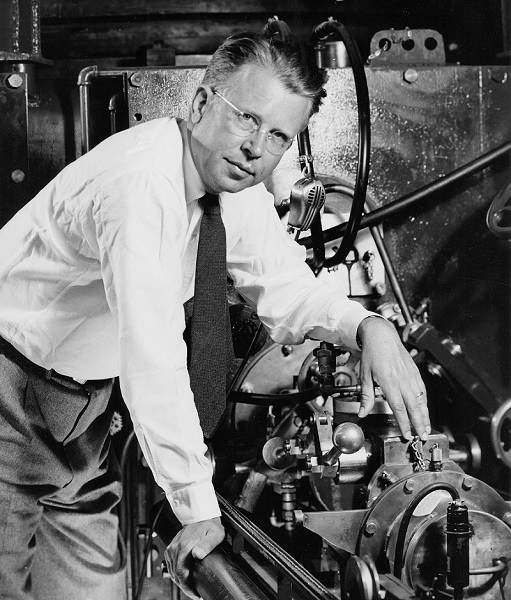 Some of Lawrence papers on the Cyclotron invention (the theory and tests)  are present in the Wenner Collection:

Today, medical cyclotrons produce not only medical isotopes for diagnosis and therapy, but also are used as sources of beams of small particles (protons, electrons etc.) for medical treatment, e.g. proton therapy.

Note: The author thanks Y. Kostov for truthful discussions on science subjects of the blog post.