The images, texts, and details that did not make it into this week’s episode of Initial Conditions: A Physics History Podcast
Maura Shapiro, Podcast and Outreach Coordinator
Initial Conditions Podcast

Welcome to the first ever episode of Initial Conditions: A Physics History Podcast and its accompanying blog post! This show has been many months in the making and I am so excited to share it! I am even more excited that our first episode is one that is so close to my heart: the story of Eunice Foote (1819-1888), the once forgotten pioneer of climate science. In these blog posts, Justin and I will share how we made each episode and the details that did not make it into the show (the most difficult part of each episode is deciding what to cut). These posts are meant to extend the episode to make the research process accessible, share our favorite resources, and encourage further learning and exploration.

If you want to know the story of humans studying climate change, you need to know the story of Eunice Foote. In 1856, Eunice Foote, an American amatuer scientist, conducted an experiment on the effect of the sun’s heat on different atmospheric conditions. She concluded that increasing carbon dioxide in the atmosphere would lead to a warmer planet. To reach this conclusion, Foote isolated different gasses and atmospheric conditions in glass jars. She then exposed them to sunlight, measuring the temperature every few minutes. She found water vapor absorbed and retained heat well, but the most effective gas was carbon dioxide. She wrote in the American Journal of Science and Art, “the highest effect of the sun’s rays . . . to be in carbonic acid gas,” and later declared, “an atmosphere of that gas [carbon dioxide] would give to our earth a high temperature.” Despite being the first to reach this conclusion, and despite the publication and initial promotion of her work, she was ultimately forgotten to history. That is, until 2011, when Raymond Sorenson, a retired geologist, rediscovered her work in an old almanac and recognized her importance. Since then, historians, scientists, and the public have done incredible work bringing her story to light. I am lucky enough to be one of them.

[Here is the article I wrote about her for Physics Today and the Ex Libris Universum post that digs into the behind the scenes.]

Because there is no known photograph of Foote, we rely on artist illustrations such as this action shot of a woman scientist by Carlyn Iverson.

I first learned about Eunice Foote from a list of physicists from underrepresented groups compiled by AIP’s Assistant Public Historian, Joanna Behrman. At the time, I was an intern for the Center for History of Physics and Niels Bohr Library & Archives working to make K-12 teaching guides. I thought: “a woman in climate science whose contributions had been ignored for 150 years?” I was eager to learn more. However, there weren’t many resources available. Not even a known photograph of Eunice Foote, which is odd considering she was part of a well connected family and other family members had portraits. Interestingly enough, she was an artist herself, known for her landscapes.

She was not only a scientist and artist, but she was also a women’s suffrage activist. She and her husband attended the 1848 Seneca Falls convention which many credit with sparking the movement for women’s right to vote. She not only attended this momentous event, but served on the committee tasked with recording and publishing the meeting minutes, indicating she was among the leaders of this movement. 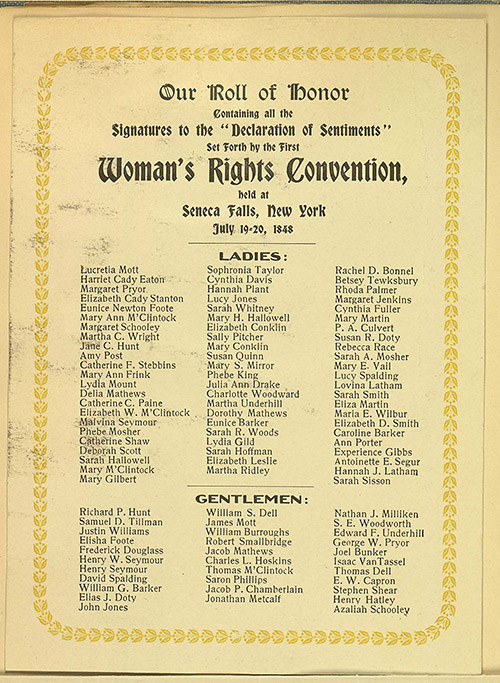 Eunice Foote is listed as an attendee alongside Cady Stanton.

To add to this impressive list of occupations, she was also an inventor with a few patents to her name. It is also suspected that she assisted her husband, Elisha Foote, a patent judge, with some of his inventions. 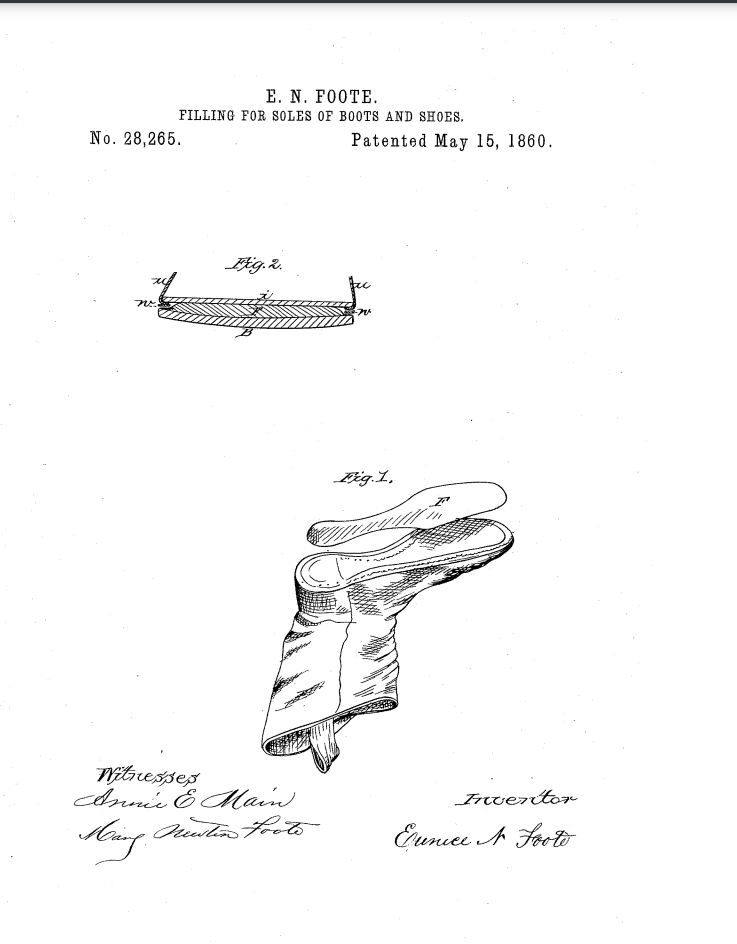 One of Foote’s inventions was this shoe sole filler which minimizes squeaking. There is absolutely a pun about Foote and shoes waiting to be made. https://patents.google.com/patent/US28265A/en

After researching enough to make the teaching guides, I decided I was not ready to stop sharing her story so I pitched it to Physics Today. The journey to writing that article was unlike anything I had experienced before. With the confidence of such an impressive editorial staff supporting me, I reached out to experts–and they responded! I was intimidated by the prospect of impressing the very people who taught me everything I knew about Eunice Foote. It turns out the experts were just as eager to share their knowledge with me as I was to absorb it. I had never dived into a subject so deeply. I learned everything I could about that period in American history. For example, I talked with an expert in Puritanism to understand why New England was such a ripe place for learning in the mid-nineteenth century. One of the most gratifying exchanges I had was with a distant relative of Elisha Foote, Liz Foote (@footesea on twitter). Like her distant in-law, she is an environmental scientist and learned of Eunice Foote as an audience member during a talk by environmental activist Katharine Hayhoe. The experts closer to home, the librarians at NBLA, were also instrumental, and discovered patents that Eunice Foote held. Armed with more information than I knew what to do with, I completed the article (which was heavily edited down and fact-checked by the amazing editors of Physics Today).

Still, three teaching guides and a very long article was not enough for me. I knew the moment Justin and I started working on the podcast that I wanted to continue to share Eunice Foote’s story. The Wenner Collection includes a volume of the American Journal of Science and Arts with her brief, one-and-a-half page long article, published in 1856. Her article is impressive, but I think the real gem of the NBLA collection is the 1857 Scientific American article, “Scientific Ladies – experiments with condensed gases,” that comments on the quality of Foote’s work. This article served two major purposes for the rediscovery of Eunice Foote. It contextualized her research as a response to earlier discussion on why the tops of mountains are cooler than valleys (as Foote confirmed, the less dense air, found at high altitudes, does not absorb or retain heat as readily as denser air). This discussion was part of a larger conversation about how the Earth’s climate has changed over time. Partially due to the search for coal, scientists were finding evidence of tropical plant life in mountains which are no longer hospitable to such foliage. By investigating what conditions could have enabled this life, such as air with higher carbon dioxide and water vapor content, Foote hypothesized a past atmosphere rich in those molecules could explain the tropical fossils. This article reports that Foote’s research was in response to such discussions. 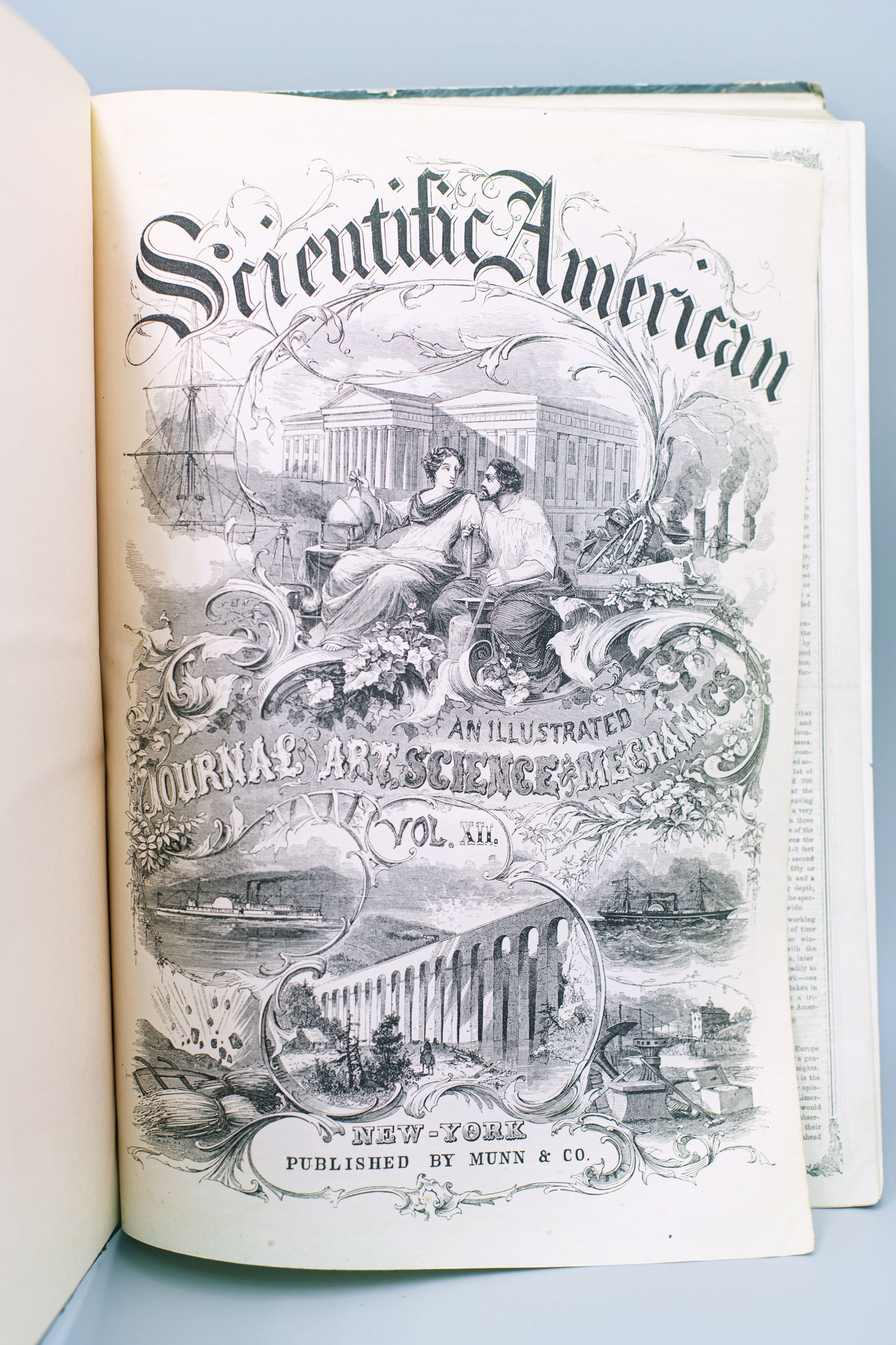 This issue of Scientific American demonstrated that Foote’s name did not have to slip into obscurity. In this 1857 issue, they praised Foote’s work and the work of women scientists.

Perhaps equally significant, this article said that by conducting this wondrous and important experiment, Eunice Foote proved women are talented scientists and that Scientific American benefited from their contributions. When commiserating on how women’s scientific achievements have been historically overlooked, it is easy, I think, to say, “oh well that was the past and maybe people just did not listen to women scientists.” This Scientific American article demonstrates that people could listen. The article concluded, “The columns of Scientific American have been tentimes graced with articles on scientific subjects, by ladies, who would do honor to men of the highest scientific reputation; and the experiments of Ms. Foot[e] afford abundant evidence to the ability of women to investigate any subject with originality and precision.” 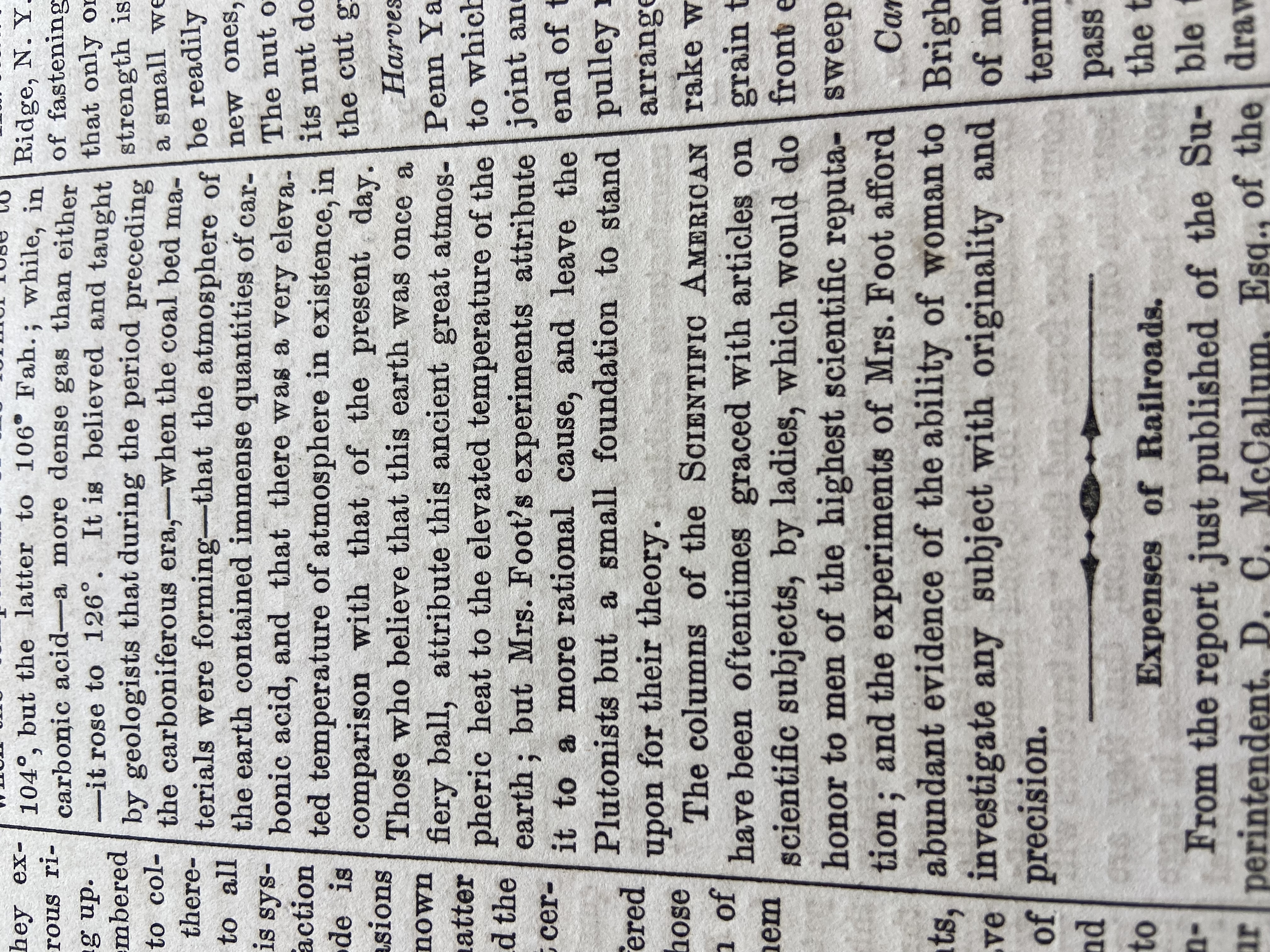 The final paragraph is revealing of the clarity that some institutions had regarding women scientists: that women are as talented and valuable as men.

John Tyndall and Eunice Foote didn’t exactly start on equal foot[e]-ing. (That was a cheap pun, I know). While Eunice Foote was a highly educated woman for the 19th century United States, her background was no match for Tyndall’s. Being a European man, the scientific establishment was more accessible to him. He attended the University of Marburg and studied under and alongside some of the most prominent scientists of his time. When he decided to study how heat is absorbed by gasses, he had a team build a high precision device made to his specifications. There is also the mystery of whether or not he knew about Foote’s work, which preceded the publication of his own by three years. In this podcast episode, we dive into the drama surrounding this question. 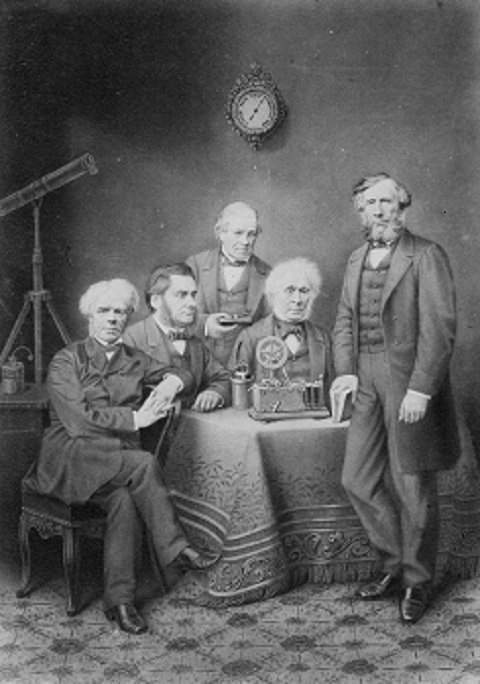 Here is John Tyndall posing with his scientific friends and their impressively high tech instruments. This image was teased in May’s Photos of the Month post. In this circa 1865 portrait, he poses with (from left) Michael Faraday, Thomas Huxley, Charles Wheatstone, and David Brewster.

At the end of the episode (I don’t think this spoils too much), Justin asks me why Eunice Foote’s story is so important to me. Eunice Foote was a woman who was ultimately underestimated despite all her work, talent, and privilege. I think many women in physics sometimes feel like we have to do more than our male counterparts for equivalent recognition and Foote’s story is an obvious example of this. Even though she was published in a scientific journal and her work was presented at the AAAS meeting, her contribution to atmospheric science was still forgotten. But, her story is also one of inspiration. Today, Eunice Foote’s name and work are receiving the attention they deserve because of the work of scientists, historians, and everyone who shares her story. It is thanks to you, our audience, who want to learn about the untold stories in physics and understand why they have not been told. That is what Initial Conditions: A Physics History Podcast is for: sharing the unconventional stories of physical discoveries and their context.

Waxman, Olivia B., and Arpita Aneja. “The History of Seneca Falls You Didn't Learn in School.” Time. Time, December 8, 2020.