Since this is my first post to this blog, I wanted to share photos that capture the intersection of my two interests: the history of physics and the history of biology. That theme is broader than it might seem at first, so to narrow it down, I'll focus on one topic in particular: the effects of radiation on living organisms.

In 1958, geneticist Hermann Muller wrote an essay arguing that scientists underestimated the dangers posed by radiation. Tinkering with the nuclei of atoms, he insisted, meant damaging the nuclei of cells. Muller saw radiation exposure as a hazard not just to the people exposed, but their descendants, who would inherit damaged genes. The proliferation of radiation sources like medical X-rays were an existential threat to future generations.

While few scientists were as worried by this as he thought they should be—Muller was, among other things, an inveterate pessimist—investigations into the biological effects of radiation were a major undertaking over the second half of the 20th century, as the images below illustrate. 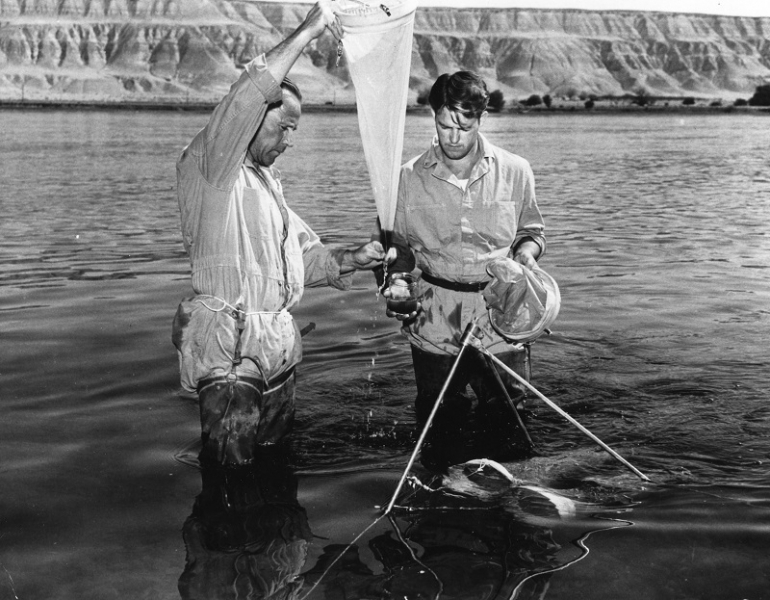 Reactors at the Hanford Site in Washington State were the main source of plutonium for nuclear weapons from the Trinity test in 1945 through the end of the Cold War. In this photo, most likely taken between 1950 and 1956, Hanford biologists collect samples from a plankton trap, as part of an effort to understand the movement of radionuclides through the food chain. 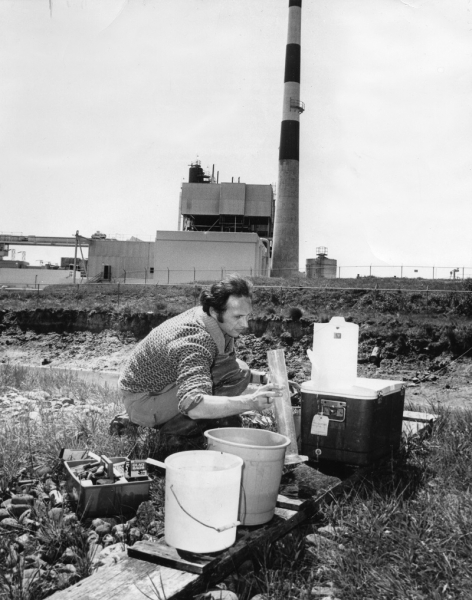 James Adams measures the volume and size of oysters growing in the discharge canal.

This photo from the mid-1960s shows Pacific Gas & Electric biologist James Adams measuring oysters living in the discharge canal of the Humboldt Bay Nuclear Plant. According to Adams’ findings, these oysters were perfectly safe to eat, and the heat from the plant even helped them grow faster. 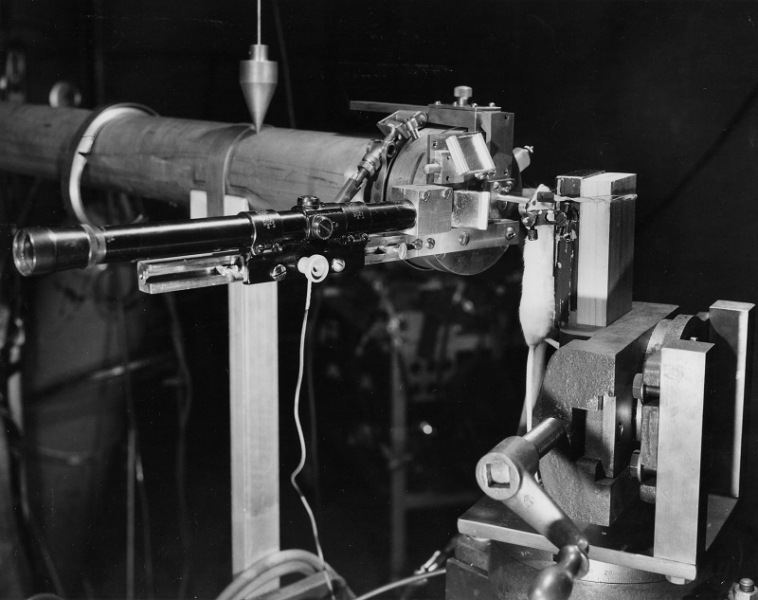 Experimental set-up for irradiating mouse brain tissue with a beam of 22.5-Mev deuterons from the 60-inch cyclotron.

Nuclear reactors aren’t the only radiation source scientists have worried about. Astronauts operating outside the earth’s atmosphere and magnetic field are exposed to significant levels of radiation from the sun and other cosmic sources. This photo from 1959 shows a mouse being exposed to a deuteron beam intended to replicate the effects of cosmic rays. The researchers at Brookhaven National Lab determined that the simulated cosmic rays caused almost no damage to brain tissue. They did, however, cause dark-furred mice to go gray at the exposure sites. 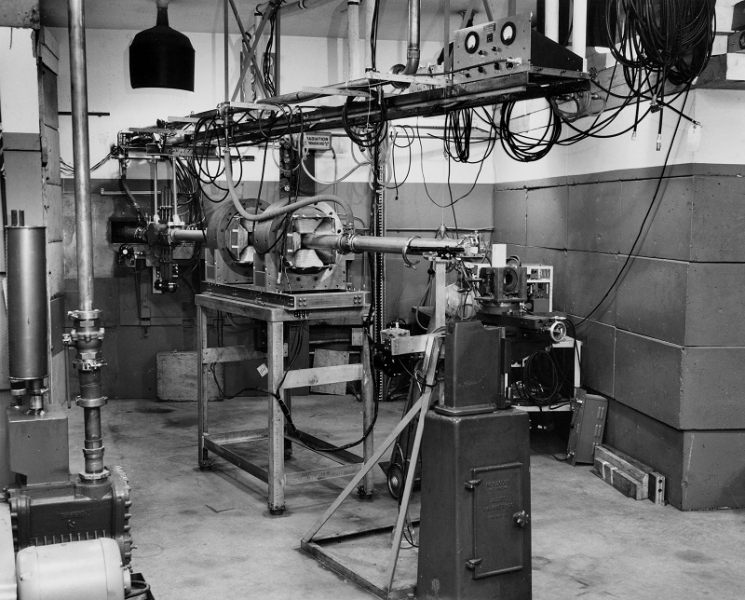 Experimental set-up for irradiating mouse brain tissue with a beam of 22.5-Mev deuterons from the 60-inch cyclotron.

And a wider view of the same experiment. 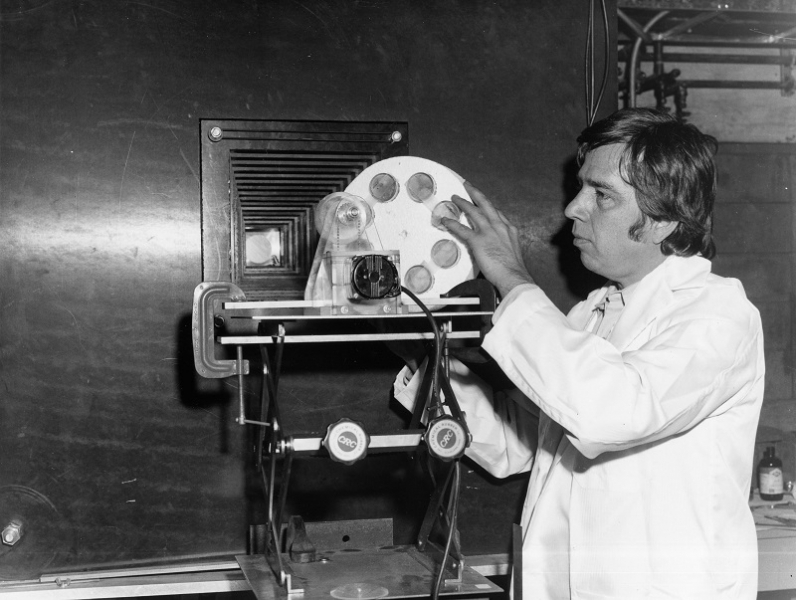 In the early 1970s, James Montour led a team of physicists and medical researchers who studied the effects of neutron beams on mice and, as pictured here, 1-day-old chicks as part of an effort to develop new radiation therapies for cancer patients. 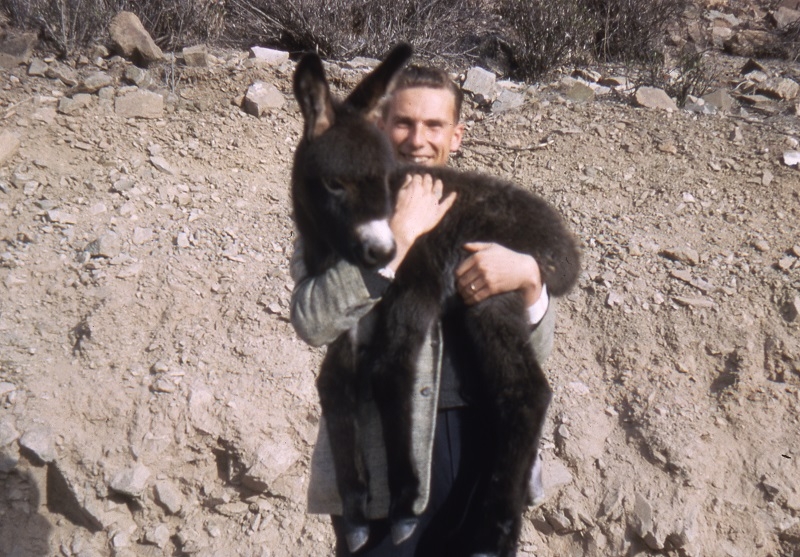 And finally, I'd like to use the "physics and animals" theme of the post as a flimsy excuse to leave you with this delightful photo from 1964, which has nothing whatsoever to do with radiation or biology, in which German rheologist Manfred Wagner carries a donkey in the Chilean Andes.

I am at a conference in which your former colleague, Ayah Nurridin (Princeton University), told me about your long-standing work with/on Garrett Hardin at the time you were with the SPLC. I'm super interested in what you covered and did and your interests. If you're available, I would love to communicate. My email is [email protected]

I'm a professor of history at UCSB where I encountered Hardin's materials.

Ex Libris Universum admin here - I sent your email and phone number on to Jon but didn't want it to display publicly, so I slightly modified your comment.