In late November, the National Science Foundation announced that the Arecibo Observatory, located in northern Puerto Rico, would be decommissioned. Their announcement came shortly after several key suspension cables supporting the telescope broke, partially damaging the Observatory’s famed 305-meter dish. Then, on December 1st, the entire receiver platform containing the telescope collapsed into the dish. It is truly an astonishing and saddening sight to behold - luckily no people were hurt at the site when it collapsed.

Arecibo, which first opened in November of 1963, was a remarkable feat of engineering, and throughout its 57-year lifespan, numerous discoveries were made using observations from the telescope. A full listing of the discoveries made using Arecibo would require a whole series of blog posts, but a few notable ones include: a more accurate understanding of Mercury’s rotation, the first exoplanet, and the first repeating fast radio burst. It also was used in ionospheric and atmospheric research, the monitoring of near-Earth objects, and studies of the possibility of extraterrestrial communication.

Join us as we look back at the history of the Arecibo Observatory and some of the research done with this one-of-a-kind telescope! If you’re interested in more visual history of Arecibo, I recommend you browse the Cornell University Library Digital Collections, which contain some additional incredible archival images of the Observatory. Or if audio is your medium of choice, listen to this Planetary Radio episode featuring remembrances of Arecibo from Bill Nye and a conversation with the director of the Arecibo Observatory, Francisco Córdova. 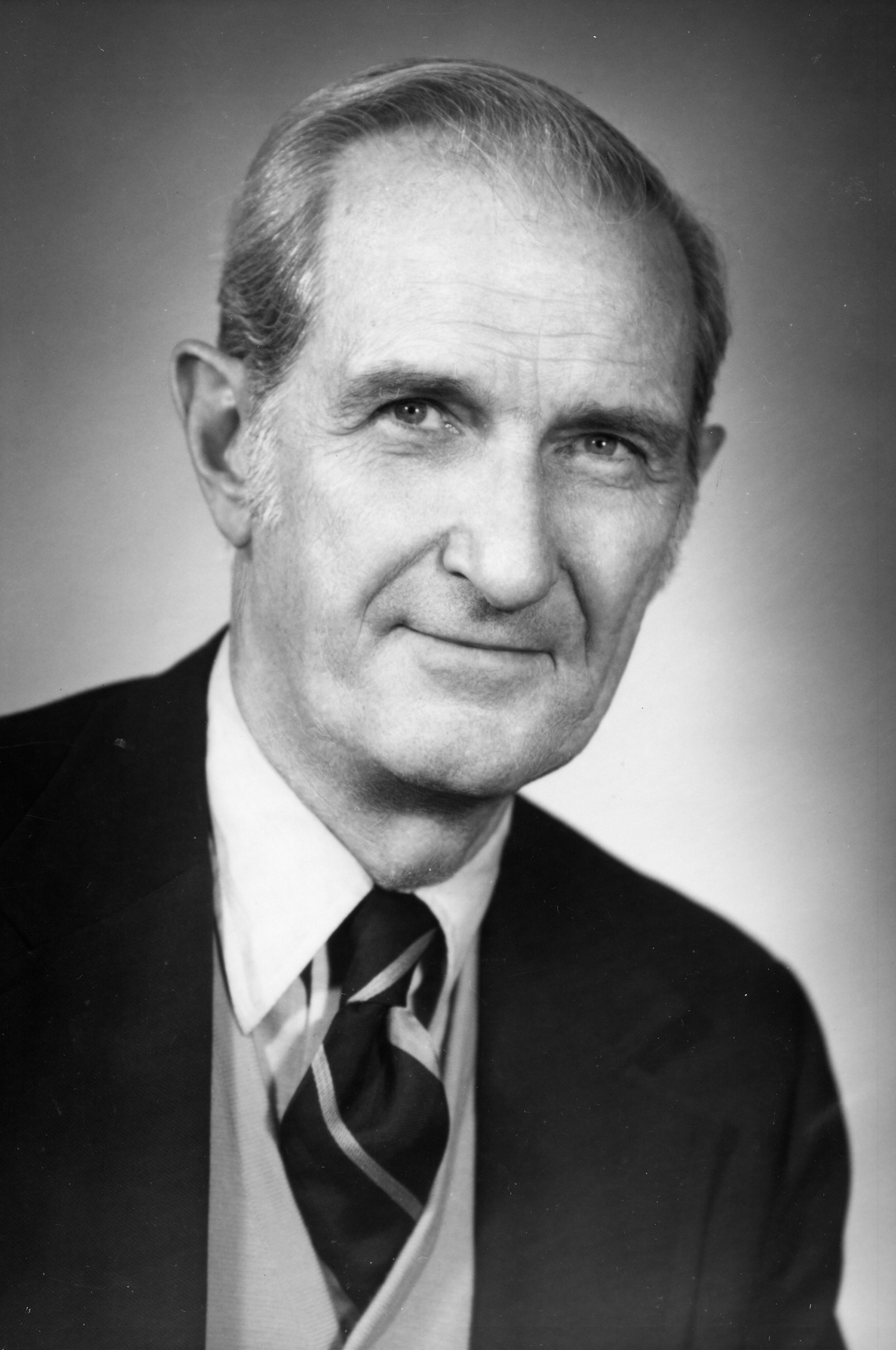 Dr. William E. Gordon, the “Father of the Arecibo Observatory” led the development and construction of the Arecibo Observatory. His oral history from 1994 offers a fascinating glimpse into his experiences working on, and later advising, Arecibo. One of Gordon’s most striking quotes from this interview, to me, was his answer to the question of the lifetime of Arecibo:

“When we first talked to engineers here about building this that was one of the first questions they wanted to know: What’s the lifetime? We batted that one around and around and finally said, ten years. They were thinking of bridge cables. Once they even removed one cable just to look at it. Let’s see, starting in 1963, in 1993 it’s 30 years old. It’s like a cat. It’s already had three of its nine lives.” 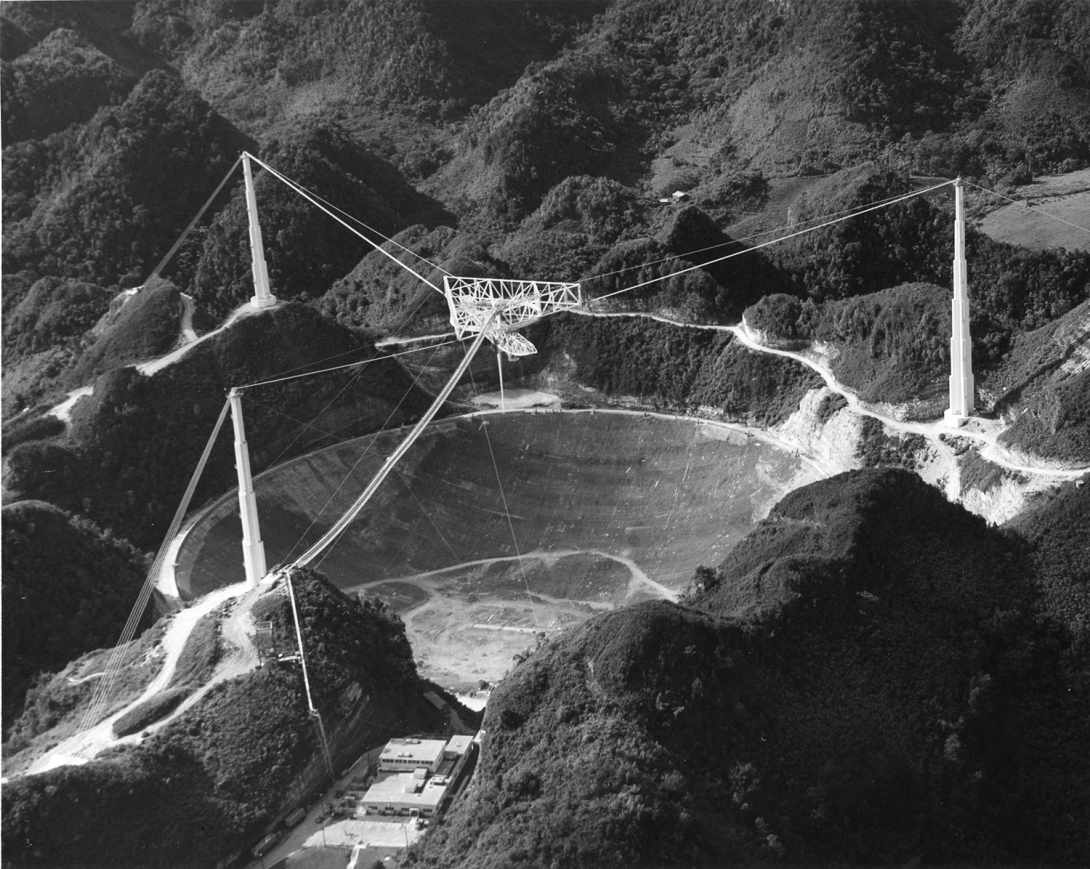 Aerial view of Arecibo Observatory site, date unknown. The site was selected as the home of the telescope for a number of reasons, including: the natural sinkhole which provided a convenient concave surface for the dish, and its location in a U.S. friendly territory near the equator. 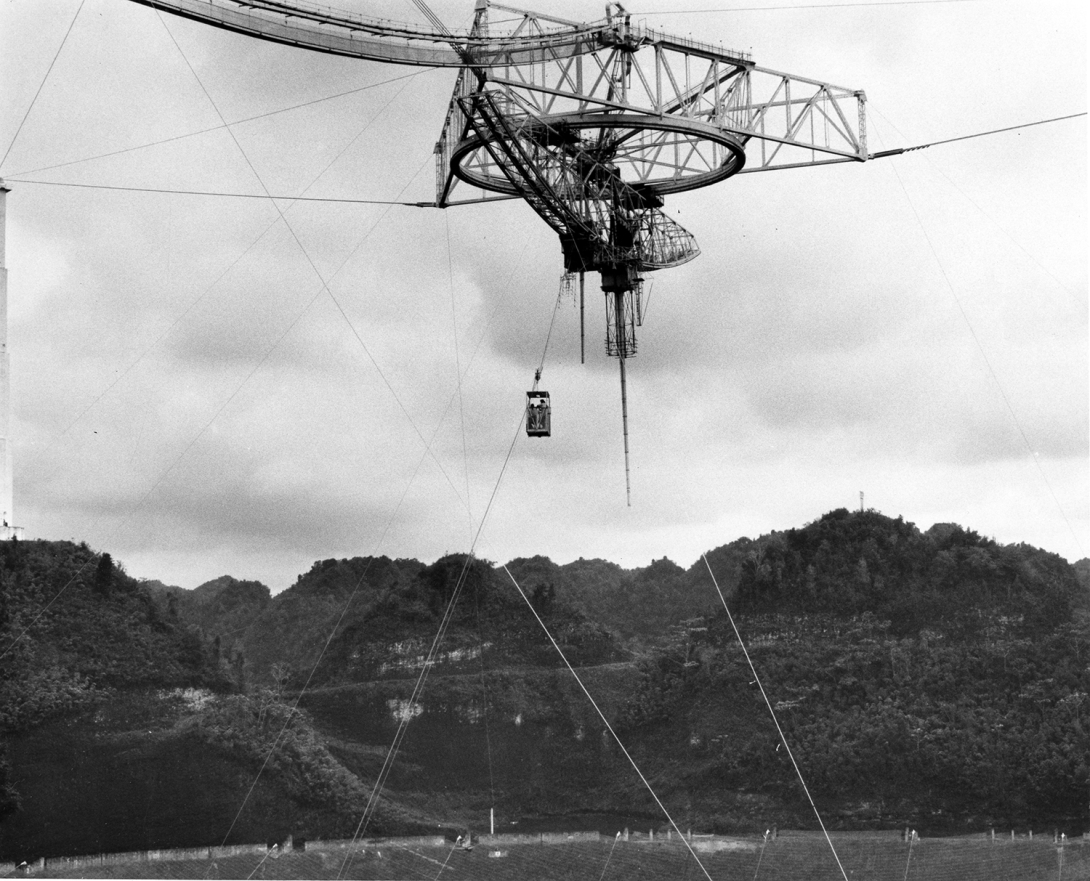 The Arecibo Observatory receiver suspended 400+ feet above the dish on the ground, April 1969. Visible in this shot are both the cable car, which transported people to the receiver, and the suspended catwalk to the platform. 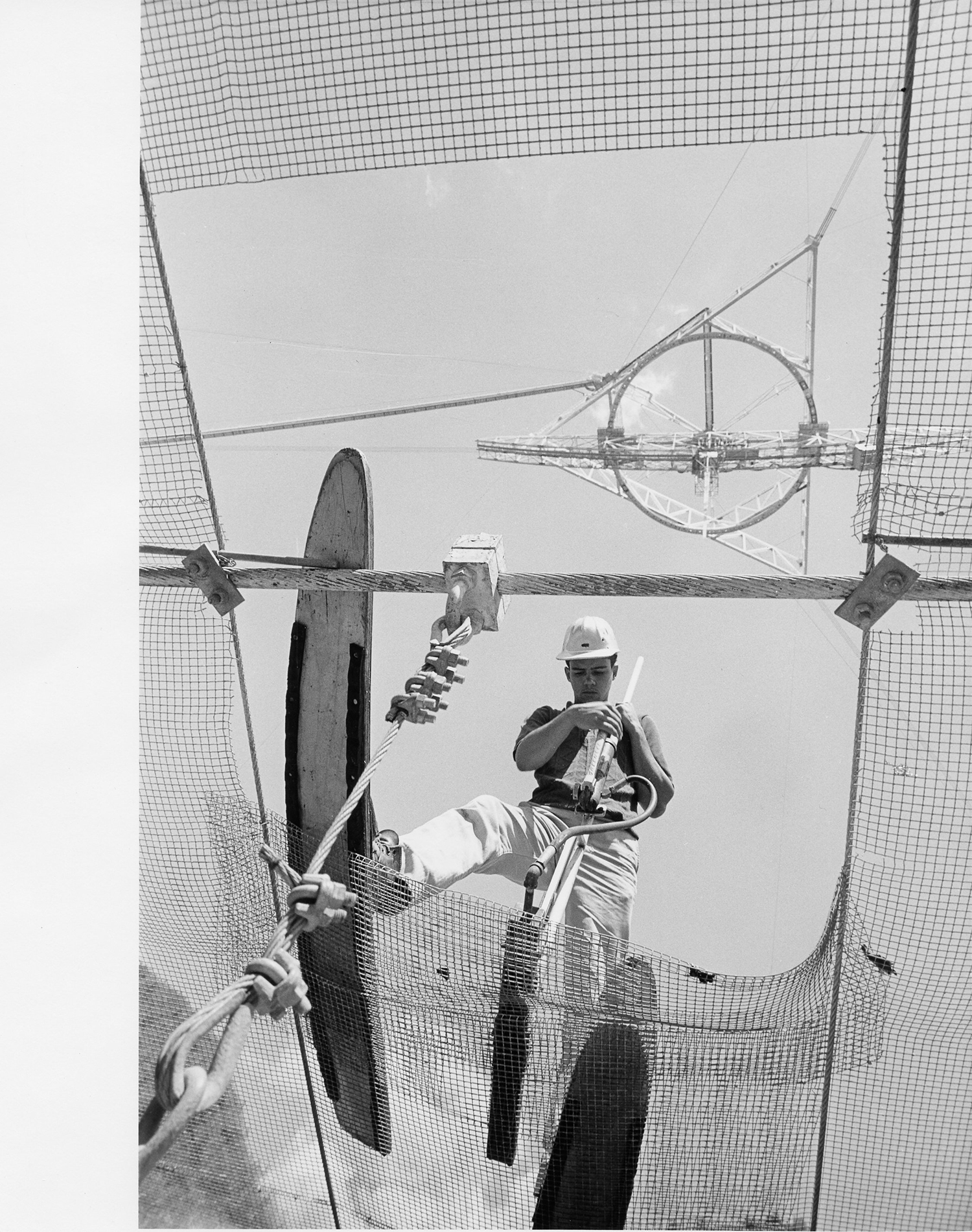 A worker repairs a portion of the wire mesh dish below the telescope platform, visible above, date unknown. The original Arecibo dish consisted of a thick mesh, but in 1974, a more solid aluminum tiled design was added to its surface. Notice the snowshoe-like boards the worker is wearing on their feet so they don’t break through the mesh! 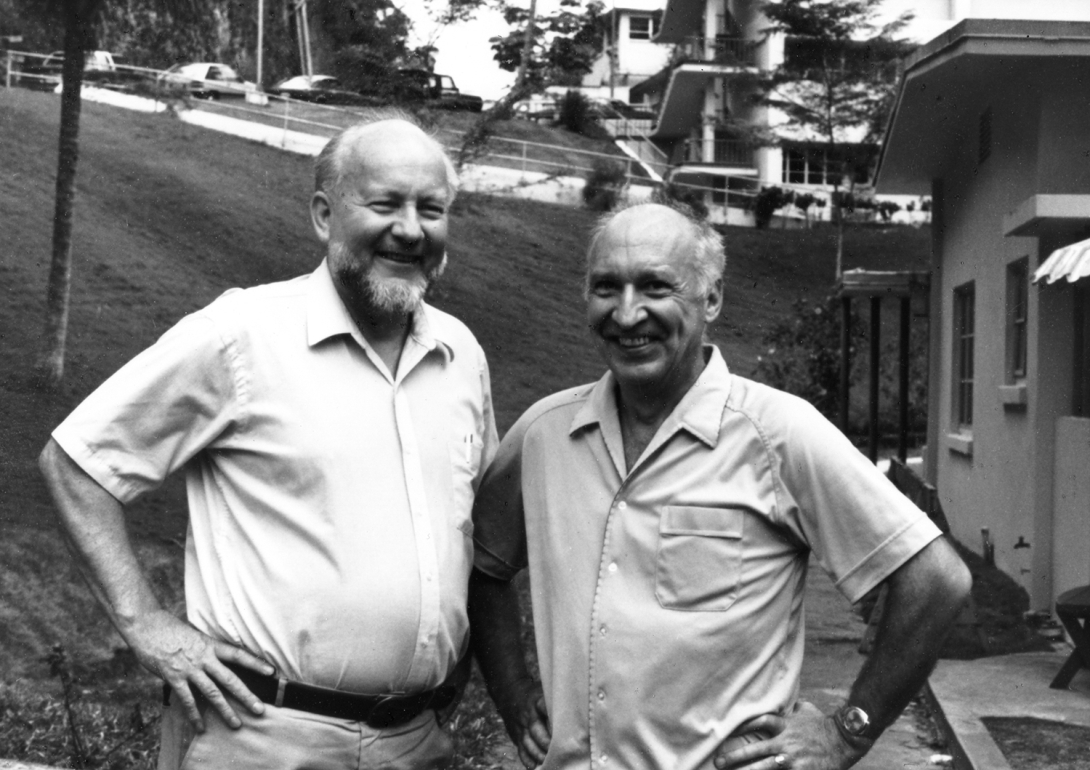 Tor Hagfors and Colin Hines in Arecibo, Puerto Rico in 1988. Hagfors served as the director of Arecibo from 1971-1973 and was the director of the National Astronomy and Ionosphere Center, which oversaw operations of Arecibo, from 1982 to 1992. Hines was Head of Aeronomy at Arecibo in the late 1980s and early 1990s. 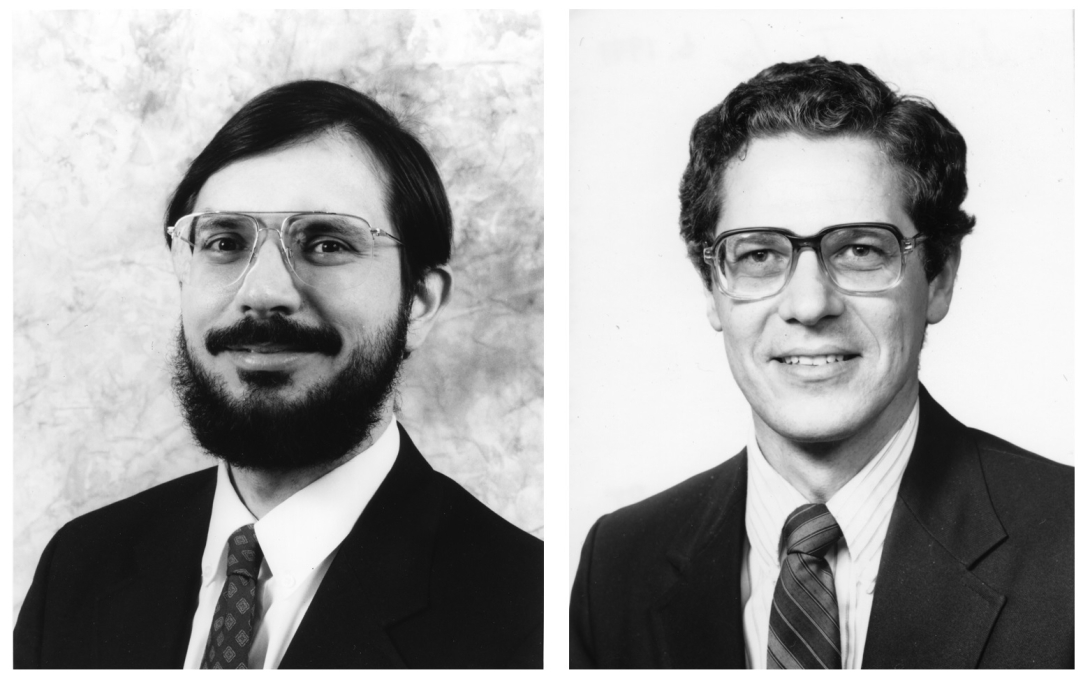 Russell Hulse and Joseph Taylor Jr. were awarded the 1993 Nobel Prize in Physics for discovering a new type of pulsar using the Arecibo telescope. Their discovery was made back in 1974, seven years after Jocelyn Bell Burnell and Antony Hewish discovered pulsars. Hulse and Taylor’s observation of this binary pulsar was the first indirect confirmation of gravitational waves.

The loss of the Arecibo Telescope is huge to the scientific community and to those in Puerto Rico who use the telescope and support its functions.As Abel Méndez, a professor at the University of Puerto Rico at Arecibo, put it, “The world without the observatory loses, but Puerto Rico loses even more.” The future of Arecibo's telescope is unknown at this point, but some aspects of the Arecibo site will remain active, supporting other scientific research, visitors to the site, and STEM outreach.