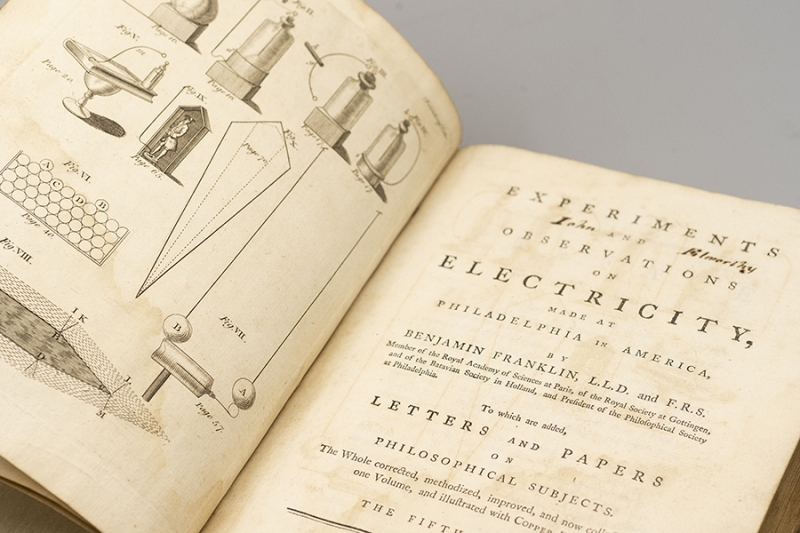 Experiments and Observations on Electricity by Benjamin Franklin, from the Wenner Collection

How did we humans develop our current understanding of the modern world?  How did we get to the point of being able to even conceive of such a thing as Nobel prize-winning laser tweezers?!1

I won’t pretend to even begin to answer these questions in a blog post, but to get a small clue, I will suggest that we might look to the development of the sciences.  The history of science can be a lamentably vast and ungainly subject, but luckily for non-scientists like me, part of the brilliance of the Wenner collection is that it highlights many of the great minds that brought us to the point of modern physics.  Let us use it as a point of investigation.

Today, we might talk about computers and optical lasers1 as being important to current scientific developments, but back in the 18th century, electricity was a sizzling topic among scientists and visionaries.  The Wenner collection contains a wide variety of monographs and articles from journals that represent some of the competing theories about what electricity is and how it functions from this time period.  Of these, one volume particularly intrigued me with its fame and beauty: a 1774 edition of Benjamin Franklin’s Experiments and Observations on Electricity.  This volume reflects a culmination of experiments and studies that Franklin originally published in the 1750s.

But what was he up to when he wasn’t flying kites in lightening storms? 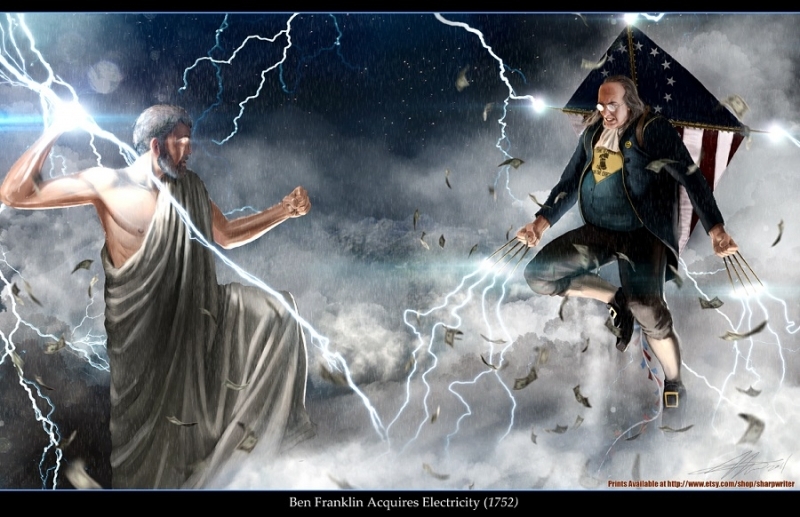 To answer this question, I needed to look no further than the book itself.  Upon a closer examination of the volume, I immediately noticed that it is only partially about electricity.  A small sampling of the other subjects covered include: how to learn to swim as an older person, designs for his stove (known as the Franklin stove), chimney construction, population growth tendencies, and music.  Franklin had strong opinions about music, as demonstrated on p. 485 in Experiments and Observations in a letter to Lord K. at Edinburgh in 1765:

So what music might Benjamin Franklin have listened to in order to value music so highly?  Firstly, we can take a look at surviving printed sources. Franklin was a successful printer and publisher.2  He printed Isaac Watts’ Hymns and Spiritual Songs, so we can reasonably conclude that he might have heard some of the hymns.  An extant copy of Franklin’s printing of the hymnal from 1741 is one of the earliest English-language hymnals that still survives.3

We might suppose that he may have heard Jesus Shall Reign from this hymnal.  Here is a recording by the Saint Michael’s Singers:

So what other sounds might Franklin have been exposed to?  Besides hymns, few references to specific lay music tunes survive to today, but fortunately we do have mention of several ballads that Franklin wrote of in a letter to his brother Peter, which appears in Experiments and Observations.  The letter in itself is a fun read: see the full letter here.

One of the specifically mentioned ballads is the Ballad of Chevy Chase, so we know he heard this one.  Here is a version of it by The Boston Camerata from their album titled New Britain: The Roots of American Folksong.  (There may have been several different melodies and lyrics for this ballad, so it is impossible to say for sure that this is the exact version he knew.)

Would Benjamin Franklin simply publish music and write about it?  Of course not! He also developed his own design for the ghostly-sounding instrument of the day which he called the “armonica”, also known as the glass harmonica.  The instrument is based on the idea of rubbing one’s finger on the brims of multiple wine glasses filled to different amounts to produce a variety of pitches - something you might have tried at your latest dinner party.  Here is the pre-Franklin water glass version, performed by musical glass player Robert Tiso performing a piece called Water Adagio:

This is Benjamin Franklin's take.  As you can see, his design allows for more "glasses" to be played at once. It's mounted on a spindle that does the spinning for the player.  He says of the sound: “its tones are incomparably sweet beyond those of any other.”  Here is William Zeitler demonstrating Benjamin Franklin's armonica:

Here is a modern original composition for glass armonica by Zeitler that captures the other-wordly sound of the instrument:

These examples from my foray into Benjamin Franklin's work barely skimmed the surface of its contents. Quite frankly, as a non-historian and non-expert, Experiments and Observations surprised me with its breadth of subject matter.  I originally thought I would have to do research in many outside resources to find out what else Benjamin Franklin might have had on his mind besides electricity, but the book itself proved unexpectedly rich.  The epistolary format of the book gave me an impression of Franklin’s personality through his letters addressed to a wide range of people, including fellow scientists (many of whom are represented in the Wenner collection), a reverend, and his brother.

Experiments and Observations on Electricity is a wonderful example of what a rare book from the Wenner Collection can show us about what was happening in the world of 18th century innovation and discovery in and around science.  We look forward to running across more fascinating bits from history as we continue our deep dive into the Collection. Stay tuned for more updates and sneak peaks!

2. Benjamin Franklin as a printer and publisher https://philadelphiaencyclopedia.org/archive/printing-and-publishing/

Citing within Wikipedia article:  Chase, Gilbert (2000). America's Music: From the Pilgrims to the Present. University of Illinois Press. ISBN 0-252-00454-X.

Franklin’s letter to his brother https://founders.archives.gov/documents/Franklin/01-11-02-0161

Sound clip from pub song of the time Nottingham Ale at the bottom of this post: http://www.history.org/foundation/journal/winter03-04/tavern.cfm

More on the armonica: https://www.thestar.com/news/city_hall/2013/04/10/rare_instrument_makes…