The process of discovering the unity of forces in physics is central to the history of physics. Here the story of unification is presented using images from the Emilio Segrè Visual Archives (ESVA). It is not always chronological and it is not yet complete. Nevertheless, there are many converging pieces from all over the globe, and universe, in the story of unification.

The structure for this story comes from a simple classification. Introductory courses in physics present four fundamentals forces that govern nature: gravity, electromagnetism, and the strong and weak nuclear forces. 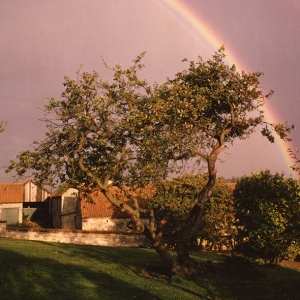 Gravity is something we are all familiar with. We think of Newton and his apple tree, pictured to the right. In reality, the story is even more fascinating. Many starting points in the history of gravitation can be identified. One is with Aristotle. He thought that objects tend towards the center of the earth based on their heaviness. Brahmagupta, a scholar working in seventh century India, recognized that gravity is an attractive force [1]. In the Islamic Golden Age (beginning around the eighth century), scholars of Aristotle himself broke from Aristotelian conceptions of the universe. Historian of science Jim Al-Khalili notes that Al-Baghdādī, a scholar in the Islamic Golden Age, postulated an early form of the law of gravitation on Earth [2]. Translational and intellectual movements brought Arabic knowledge to Europe, paving the way for Isaac Newton to recognize that the motion of planetary bodies and the motion of objects on Earth are governed by the same principle, specified in his law of gravitation,

that states that gravitational force is  equal to the product of the masses of two bodies and the gravitational constant, divided by the squared distance between their centers of mass.

Newton accomplished one important unification in physics—between physical laws on Earth and physical laws in space. However, it was not until the twentieth century that Einstein proposed the theory of general relativity which specifies physicists’ current understandings of gravity as a consequence of the distribution of mass. Gravity is a deceivingly weak force, as the weakest of the four fundamental forces. 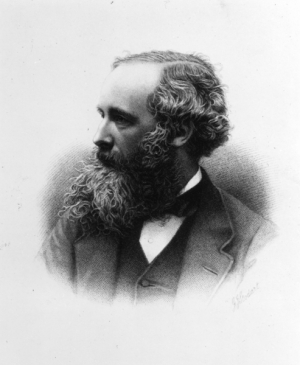 Like gravity, we recognize electromagnetic forces in our daily life, from refrigerator magnets to the motors in our cars. Humanity has long understood aspects of electricity and magnetism, much like in the case of the fundamental force of gravity: ancient Chinese texts documented magnetism [3] and the ancient Greek texts, electricity [4]. We interact with electromagnetic forces constantly, as light waves consist of oscillating electric and magnetic fields. In the nineteenth century, James Clerk Maxwell, pictured to the left, recognized that electricity and magnetism are one in the same: electricity exists between charged particles, while magnetism occurs when those charged particles move.

Electromagnetic forces for a charged particle are characterized by Lorentz force law,

The weak nuclear force is responsible for particle decay (it is the reason we can use carbon dating), as well as fusion in stars. These processes occur when quarks, which make up protons and neutrons, change “flavor.” Sheldon Glashow, Abdus Salam, and Steven Weinberg  showed that the weak force and the electromagnetic force are variations of the same force, the electroweak force. Their discovery, which won them the 1979 Nobel Prize in Physics and was experimentally verified at very high temperatures, became the basis of the Standard Model of Particle Physics. 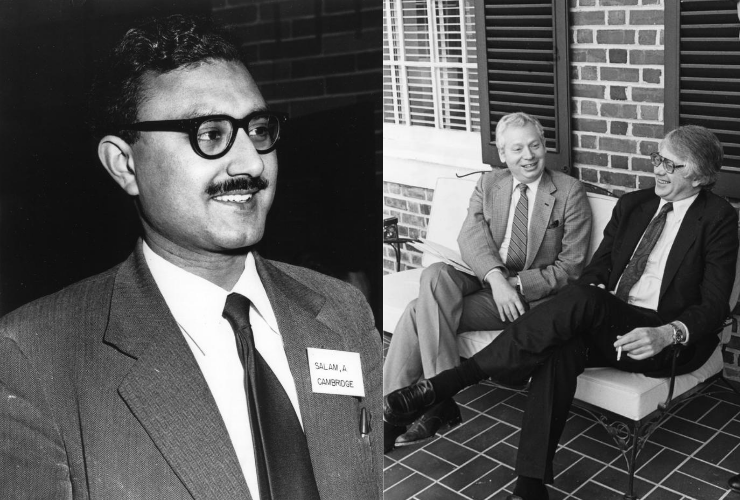 The Standard Model not only describes the weak and electromagnetic forces, but also the strong nuclear force. The strong nuclear force is responsible for holding protons and neutrons together. As the name suggests, the strong force is quite strong: 137 times stronger than the electromagnetic force and 1038 (10 followed by 37 zeros) times larger than gravity [5]. Particles called gluons mediate strong interactions. The work of theorists John Ellis, Mary Gaillard, and Graham Ross led to the discovery of the gluon by the PETRA collider at DESY [6]. For more on a key experimentalist involved in this discovery, see Sau Lan Wu: Particle Physicist from Ex Libris Universum.

Mary Gaillard at the blackboard. Mary Giallard, John Ellis, and Graham Ross proposed the experimental setup that resulted in the detection of the gluon in 1979. Photo courtesy of AIP Emilio Segrè Visual Archives, Physics Today Collection

One area of continued research in physics involves further unification of the fundamental forces. CERN found that the effects of the strong force weaken at high temperatures [7]. This could mean that at extremely high temperatures, such as the conditions during the Big Bang, the electromagnetic, as well as both the strong and the weak forces could have been unified as a single force in the early universe, although they act on different scales today: the weak force acts on a scale approximately 0.1% of the diameter of a proton, and the strong force acts within the nucleus, while gravitational and electromagnetic forces have infinite ranges [8].

Many physicists have dedicated their careers to unification. While there are many unanswered questions, there is no doubt that the story of unification is fundamental to the history of physics.

[3] Chen Cheng‐Yih (Joseph), “Magnetism in Chinese Culture” Encyclopaedia of the History of Science, Technology, and Medicine in Non-Western Cultures (2008).