November 11th, known in the United States as Veteran’s Day, but in many other countries as Armistice Day, marks the end of fighting in the First World War, which lasted from 1914 to 1918. Although World War II is usually nicknamed the “Physicist’s War,” - and WWI the “Chemist’s War” - the history of physics and physicists is also closely interwoven with the First World War. For the November Photos of the Month, I’ve pulled out some photos from the Emilio Segrè Visual Archives (ESVA) that highlight aspects of the history of physics in WWI with a focus on the United States.

Although the United States, under the leadership of President Woodrow Wilson, remained neutral for the first few years of the war, some scientists felt an increasing sense of urgency to prepare. First in March 1915, the secretary of the Smithsonian Institution Charles Walcott warned Congress that the United States had fallen far behind other world powers in its development of aeronautics. He convinced Congress to create the National Advisory Committee for Aeronautics (NACA), better known nowadays by the name of its contemporary successor – the National Aeronautics and Space Administration (NASA). Although NACA was not of great practical use during WWI, it did help establish a precedent for regular government investment in aeronautical research. A few months later in May 1915, the British ocean liner RMS Lusitania was sunk by a German U-boat. This event catalyzed the creation of the U.S. Naval Consulting Board in order to assess the usefulness of inventions for military use. The Board tended to occupy itself with questions of manufacturing and standardization though, not science.

Meanwhile in Pasadena, California, astronomer George Ellery Hale was annoyed at how the various government initiatives for technological preparedness seemed to have elevated the status of engineers and somehow missed including the scientific community. As the foreign secretary of the National Academy of Sciences (NAS), Hale was especially miffed that that organization had not been included in an advisory capacity thus far. In response, Hale and the NAS created the National Research Council (NRC). A delegation led by NAS President William Welch and including Hale went to the White House where they impressed on Wilson the advisory role the NAS should play, as well as the necessity of scientific research to prepare in the event the U.S. went to war as well. Wilson eventually gave public approval to the group, although the NRC would face difficulties in obtaining funding throughout the war. Robert Millikan, shown above, was very active in the NRC, including first organizing research around the detection of submarines and later working on aeronautical instruments through a collaboration with the U.S. Army Signal Corps. 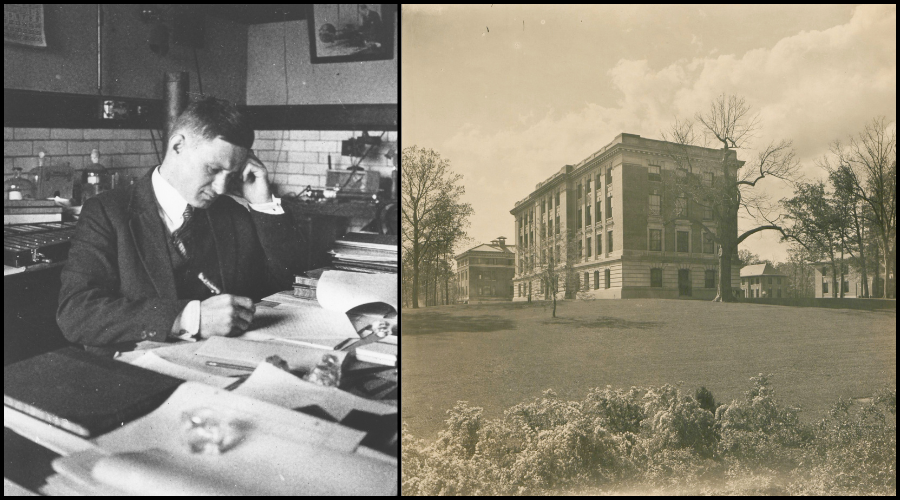 Scientific research ramped up at other U.S. institutions like the National Bureau of Standards, now known as the National Institute of Standards and Technology. After the creation of the National Advisory Committee for Aeronautics (NACA), the Bureau began research on aviation. And additional aviation research questions in the military were often turned over to the Bureau simply because the military divisions lacked proper facilities or staff in which to conduct the research. Other war-related projects at the Bureau of Standards included topics in material substitutes (because of shortages), gauges, optics and photography, radio, submarine detection, standardization for mass production and the elimination of waste, and gas warfare.

Calls to research led to the expansion of the Bureau both in its infrastructural footprint and in its staff. New buildings dedicated to chemistry, radio, military instruments, metallurgy, industry, and more were started or completed in 1917 and 1918. The Bureau staff also more than doubled, expanding from 517 individuals in 1917 to 1,117 in 1918. One of the scientists at work at the Bureau during this time was William Meggers, who worked in spectroscopy. Outside of wartime he had been occupied in cataloging the spectra of various chemical elements, but during the war he and the spectroscopy section turned their attention to aerial photography.

The war also opened up opportunities to female scientists to work in the U.S. government. Due to a shortage of men, the Bureau of Standards began to recruit women into scientific positions. Previously the Bureau had been closed to female employees of any kind – Samuel Wesley Stratton, the first director of the Bureau, was famously opposed to the hiring of women. Nevertheless, almost a hundred women worked at the Bureau during WWI. One of the first women to take advantage of the opportunity was Louise McDowell, who took a leave of absence from her professorship at Wellesley College and worked in the Radio Section from August 1918 to February 1919. The Bureau remained open to women following the war, as can be seen in the photograph above.

One of the women in the photograph is probably Johanna Busse, who began working at the Bureau during the war, eventually became chief of the thermometry section in 1929 and retired twenty years later. Or can you spot Mabel Katherine Frehafer? She was an Assistant Physicist and then Associate Physicist who worked on colorimetry at the Bureau of Standards from 1919 to 23. Another is likely Alice Armstrong, who worked as a Laboratory Assistant from 1919 to 1921 and then as an Assistant from 1921 to 1922. She worked first in the Time Section, doing quality control of Army watches, and then in the Radium Section certifying the radium for sale in the U.S. If you can identify more people in this photo please write in! 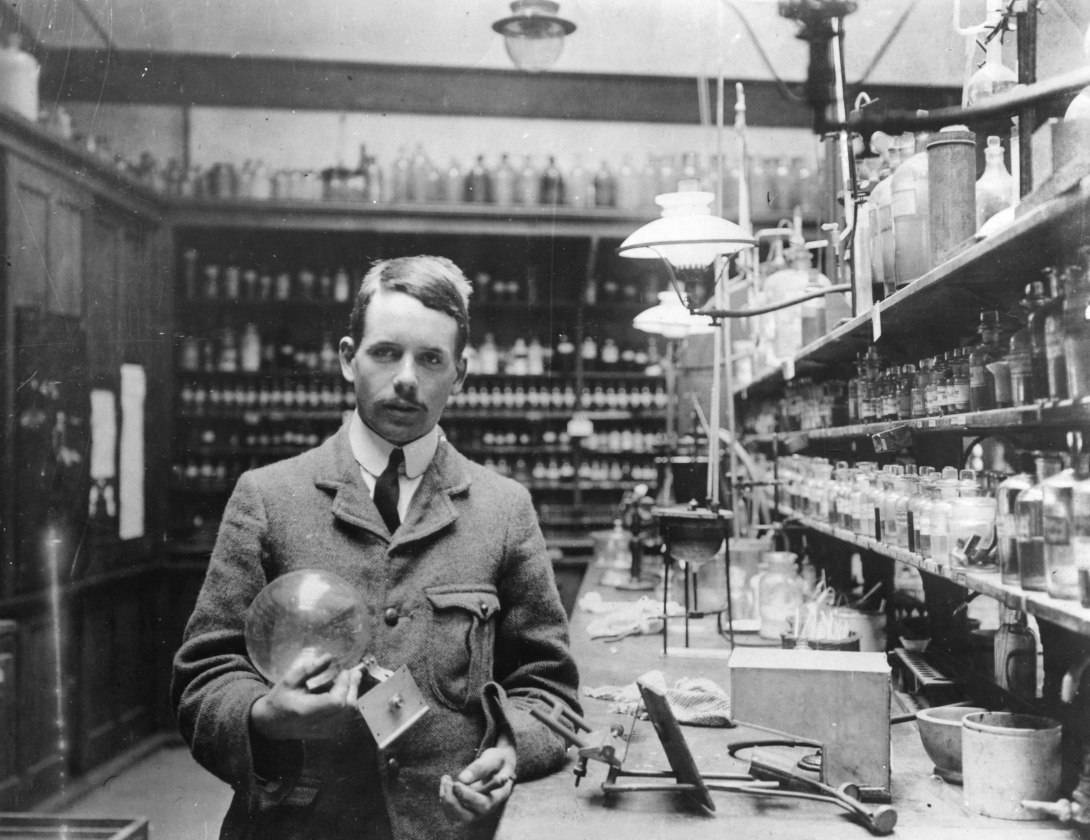 We can also trace to WWI the practice of draft exceptions for scientists. Unfortunately the practice has its roots in a tragedy – the death of young physicist Henry Moseley. Moseley was a British physicist who helped establish the concept of an atomic number as having a chemical and physical basis. Among his contributions is “Moseley’s Law” which states that the square root of an emitted x-ray is approximately proportional to the atomic number of the element which emitted it. Moseley was sadly killed in 1915 at the Battle of Gallipoli; he was only 27 years old. His death came to represent the loss of scientific talent to the war in a similar way that Wilfred Owen’s and others’ deaths came to represent the loss of artistic talent. Millikan called Moseley’s death “one of the most hideous and irreparable crimes in history.”

In 1917, George Ellery Hale sent a memo by Ernest Rutherford, who had worked with Moseley at the University of Manchester, to the U.S. Secretary of War. Rutherford argued that it was a waste to send scientific talent like Moseley to die in the trenches. Special assignments for scientific and technical experts were initially implemented on a case-by-case basis but became relatively routine after a few months. Most of the scientific experts deferred from the front lines were chemists, but a not-insignificant number of physicists also benefited from the new system. 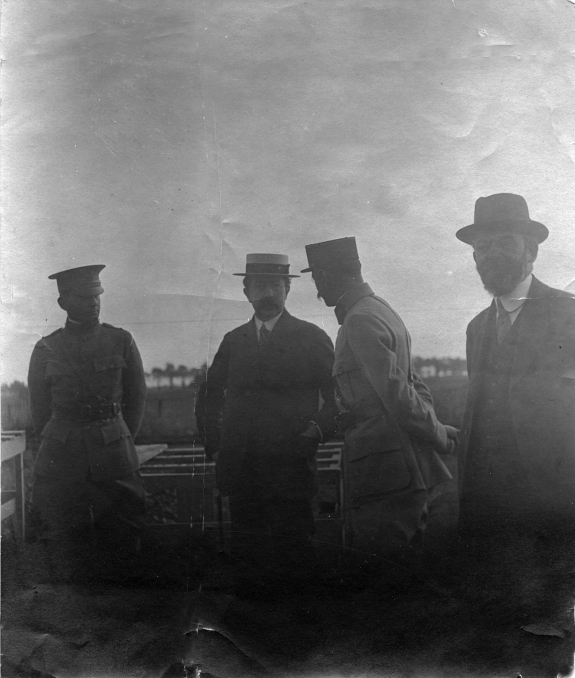 Leonard Loeb was one of the physicists who took advantage of the special assignments in the war for scientists. After earning his Ph.D. at the University of Chicago under Robert Millikan in 1916, Loeb went to work at the National Bureau of Standards for a year. Then from 1917 to 1919 Loeb served as a Second Lieutenant in the U.S. Army Air Service where he was deployed to France. But he wasn’t there to fly planes at the front – instead he developed better spark plugs for airplanes. 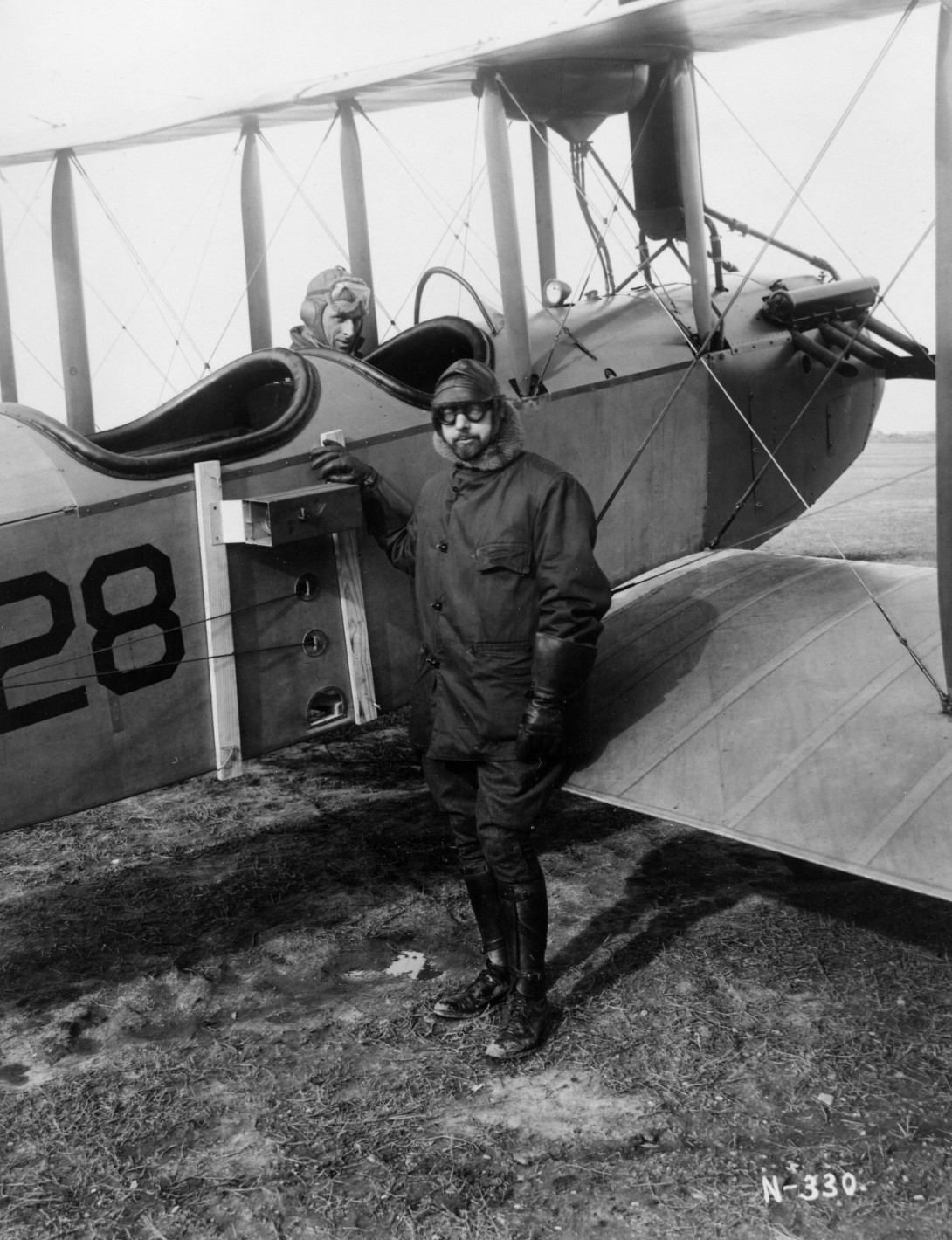 Herbert Ives also worked on aviation-related research during the war. He had earned his Ph.D. in physics studying color photography at Johns Hopkins University under Robert W. Wood in 1908. His interest in photography was a long-standing one, begun in childhood and it would continue as a focus throughout his career. He worked at various industrial laboratories following graduation, but in 1918 Robert Millikan asked him to come down to Washington D.C. where he was persuaded to join the war effort. Ives became a captain in the Aviation Section of the U.S. Army Signal Corps where he directed research into aerial photography. His work in this field led to his 1920 book Airplane Photography, but it was far from his last mark in the field of imaging. After the war Ives went on to work on television and facsimile (or fax) systems at AT&T. He is also well known for the 1938 Ives-Stilwell experiment, which demonstrated the time dilation effect of special relativity. Interestingly, Ives himself did not accept special relativity and thought the experiment disproved the theory of relativity. 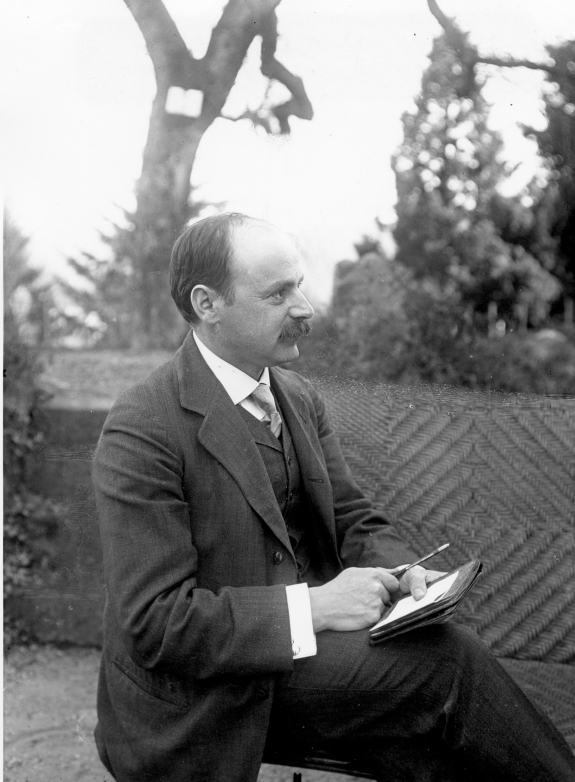 Karl Schwarzschild made astounding contributions to science during the First World War, but they were not at all related to the war effort. Schwarzschild served in the German Army artillery, doing ballistics calculations on the eastern and western fronts. While he was at the front he wrote three groundbreaking papers, one of which was the first exact solution to the Einstein field equations. This solution, called the Schwarzschild solution, can be used to derive the Schwarzschild radius – also known as the event horizon for a non-rotating black hole. Sadly, while at the Russian front Schwarzschild fell ill. (It has been speculated that he had an autoimmune disease aggravated by wartime conditions.) He died in 1916 at the age of 42. 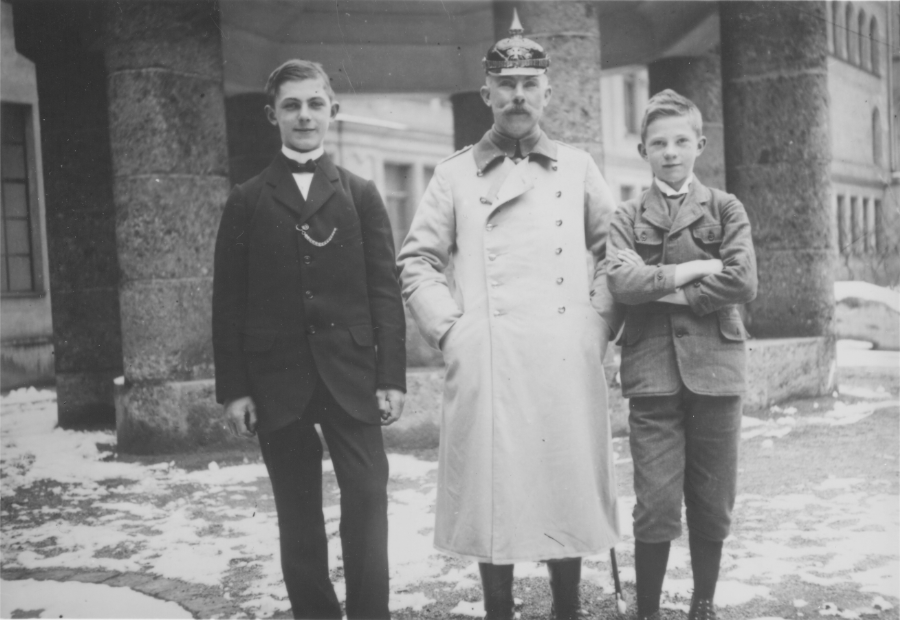 The First World War had a profound and important impact on the history of science, although like all wars its recollection is still tinged with tragedy. On November 11th when people gather to remember the “Great War” or the “War to End All Wars,” we can now – I hope – feel a little better connected to the history of that era.

Agar, Jon. Science in the Twentieth Century and Beyond. Cambridge: Polity Press, 2012.

Cochrane, Rexmond C. Measures for Progress: A History of the National Bureau of Standards. Washington, D.C.: U.S. Department of Commerce, 1966.

Fara, Patricia. A Lab of One’s Own: Science and Suffrage in the First World War. Oxford: Oxford University Press, 2018.