The Andrew Gemant Award recognizes the accomplishments of a person who has made significant contributions to the cultural, artistic, or humanistic dimension of physics and is given annually. The award is made possible by a bequest of Andrew Gemant to the American Institute of Physics.

A cover letter and the nominee's CV are required to complete the nomination. You may also provide up to 3 letters or other documents in support of the nomination. File requirements: .pdf or MS Word .doc or .docx format. Files may not be larger than 100 MB.

The awardee is named by the AIP Board of Directors during the annual spring meeting based on the recommendation of an outside Selection Committee appointed by the Institute's Board Chair. The awardee is chosen based on contributions in one or more of the following areas: 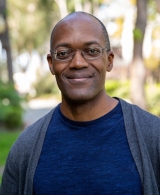 The 2022 Andrew Gemant Award is presented to Clifford Johnson for portraying the humanistic dimensions of physics to the public through a creative array of artistic, performance, and educational methods.