President Trump’s fiscal year 2018 budget requests a 17 percent cut for the Department of Energy Office of Science. Within that, it boosts advanced computing, slashes biological and environmental research nearly in half, and cuts the four other primary research programs by just under 20 percent each.

President Trump’s official fiscal year 2018 budget request proposes deep cuts to most federal science agencies as part of a government-wide reduction in non-defense spending. Among the proposals is a 17 percent, $919 million cut below the fiscal year 2017 enacted level for the Department of Energy Office of Science, the nation’s largest sponsor of the physical sciences and the steward of 10 of DOE’s 17 national laboratories.

In a statement released this week, Energy Secretary Rick Perry, said of the request:

It reflects the importance of strengthening our nuclear capabilities, and places an emphasis on early stage energy technology research and development. As we refocus resources, we will continue to utilize our national laboratories for cutting edge science in order to improve both our energy and national security.

A news release that accompanied Perry’s statement further highlights that the budget includes investments to accelerate development of an exascale computing system and to “more efficiently and cost effectively advance American dominance in scientific and energy research.” Perry, who has begun touring the national laboratories, has identified exascale computing as one of his top priorities.

The charts below summarize the major changes the administration is proposing for the Office of Science. More detailed budget information is available in FYI’s Federal Science Budget Tracker, and DOE’s full budget document is posted here. 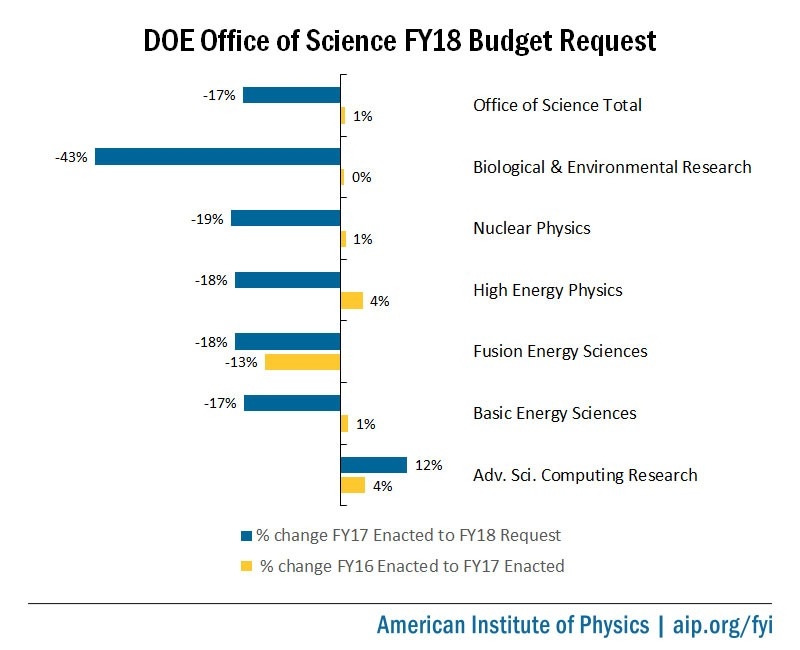 The Office of Science budget request confirms that such large funding cuts will have serious ramifications for the scientific workforce, facility operations, and the underlying science. Targeted programs would be forced to cut back on research and reduce the number of university and laboratory scientists employed. Scientific user facilities, such as light sources, would have to reduce their operating hours and support staff. The budget would also defer maintenance for multiple facilities and delay certain facility upgrades while refocusing on use of existing facilities and capabilities. 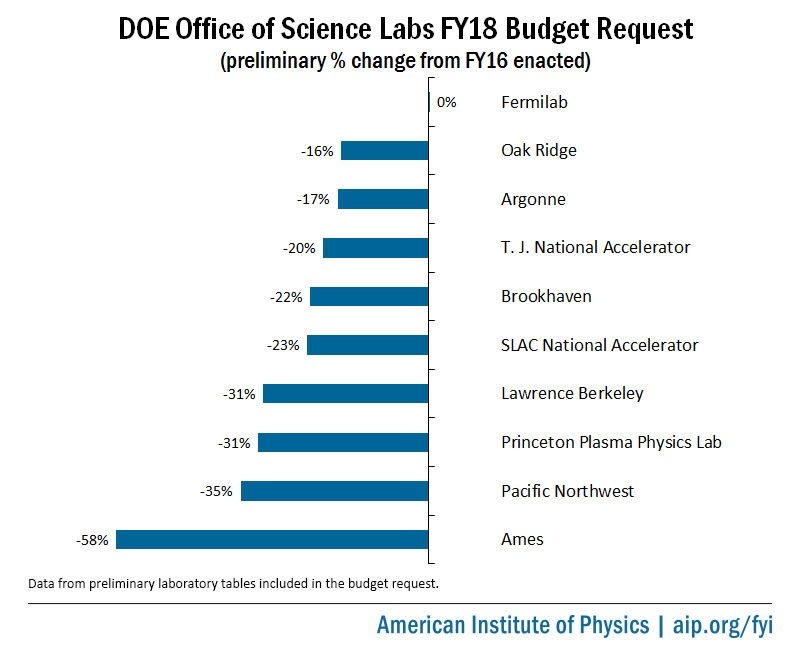 Calculations are based on the overall lab funding level, not the Office of Science funding level. The laboratory table document in the budget request contains the following note: "The numbers depicted in this document represent the gross level of DOE budget authority for the years displayed. The figures include both the discretionary and mandatory funding in the budget. They do not consider revenues/receipts, use of prior year balances, deferrals, rescissions, or other adjustments appropriated as offsets to the DOE appropriations by the Congress." 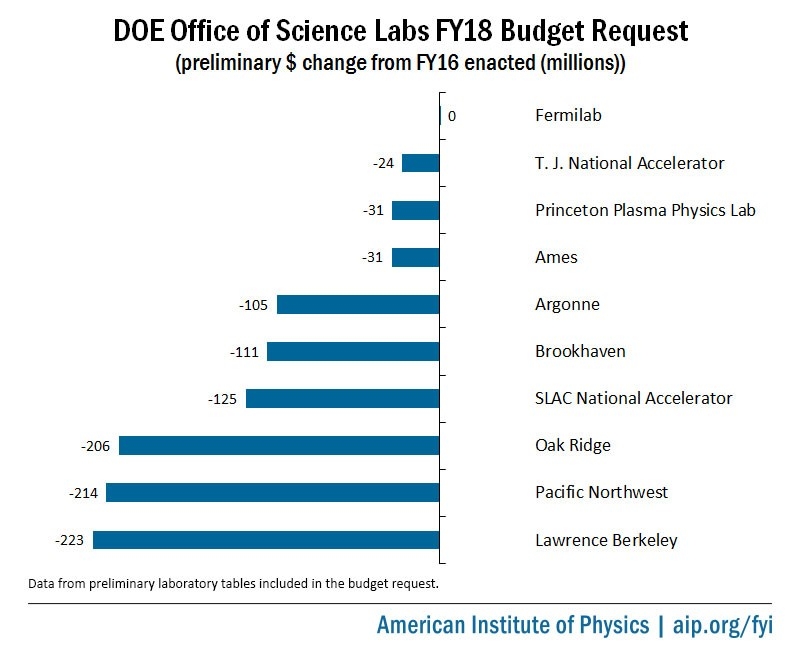 Calculations are based on the overall lab funding level, not the Office of Science funding level. The laboratory table document in the budget request contains the following note: "The numbers depicted in this document represent the gross level of DOE budget authority for the years displayed. The figures include both the discretionary and mandatory funding in the budget. They do not consider revenues/receipts, use of prior year balances, deferrals, rescissions, or other adjustments appropriated as offsets to the DOE appropriations by the Congress."

Within Basic Energy Sciences, the budget would zero out funding for several programs, including:

The budget funds operations of four of the office’s five light sources at 6 to 10 percent below last year’s levels. The fifth, the Stanford Synchrotron Radiation Light Source, would run three months, after which it would transition to standby. No funding is requested for the Advanced Light Source upgrade at Lawrence Berkeley National Laboratory, but the construction budget would provide $182 million in funds necessary to keep development on track for the Linac Coherent Light Source-II at Stanford National Accelerator Laboratory and $20 million for the upgrade to the Advanced Photon Source at Argonne National Laboratory.

Within Biological and Environmental Research, the budget would focus the Earth & Environmental Science program (formerly called Climate & Environmental Science) on development of a new, DOE-owned and operated high-resolution Earth system model, while other areas of climate research, including integrated assessments, climate feedbacks, and aerosols, would see reduced support. The budget also would nearly halve the operations budget of the multi-laboratory Atmospheric Radiation Measurement climate research observatories to $34 million, as well as significantly reduce funding for the Joint Genome Institute at Lawrence Berkeley National Laboratory and the Environmental Molecular Sciences Laboratory at Pacific Northwest National Laboratory. The budget for DOE’s three Bioenergy Research Centers, which were recently re-competed, would also be slashed nearly in half to $40 million.

Within Fusion Energy Sciences, the budget increases support for the France-based ITER fusion facility to $63 million, 26 percent above the fiscal year 2017 enacted level but scaled back significantly from the fiscal year 2016 level of $115 million. The budget also slightly boosts research and operations at the DIII-D national fusion facility at General Atomics in San Diego, and supports ongoing repair of the NSTX-U facility at Princeton Plasma Physics Laboratory.

Within High Energy Physics, the request maintains or increases support for the highest new project priorities identified in the 2014 Particle Physics Project Prioritization Panel (P5) report. These include:

The request also supports the planned funding profiles for a number of other projects, including:

However, the budget delays and reduces support for other research facilities and projects, including the Dark Energy Spectroscopic Instrument (DESI) at Lawrence Berkeley National Laboratory and Accelerator Test Facility at Brookhaven National Laboratory.

Advanced Scientific Computing Research stands out as the primary beneficiary of the Office of Science budget. Its budget includes $347 million for DOE’s contribution to the interagency Exascale Computing Initiative to deliver an exascale-capable computing system by 2021. It would also increase support to two of DOE’s three Leadership Computing Facilities – at Oak Ridge and Argonne National Laboratories. An additional increase would grow the Scientific Discovery through Advanced Computing (SciDAC) program, which facilitates external use of DOE supercomputers.

The president’s request is a major milestone in the annual budget process, and it reflects the official priorities of the Executive Branch. However, it is Congress – not the president – that legislates the appropriations that fund the federal government each year.

Congress has shown a willingness to assert its constitutional prerogative on the federal budget, including by largely ignoring President Trump’s last minute requests for fiscal year 2017 appropriations enacted earlier this month. Leading congressional appropriators are also signaling that they do not have the appetite for non-defense spending cuts at the scale Trump is proposing. In particular, Sen. Lamar Alexander (R-TN), who heads the Senate Appropriations subcommittee for DOE, said this week:

We should not pretend to balance the budget by cutting national laboratories, national parks, and the National Institutes of Health.