The final spending legislation for fiscal year 2018 boosts the National Science Foundation budget by 4 percent to $7.8 billion, a modest raise compared to what several other science agencies are receiving.

The final appropriations legislation for fiscal year 2018 provides the National Science Foundation with a $295 million, or 4 percent, funding increase to $7.8 billion.

The legislation’s joint explanatory statement, which provides funding and policy direction to the agency, acknowledges the National Science Board’s 2018 Science and Indicators report finding that the U.S. is at risk of losing global R&D spending leadership to other countries, stating:

This strong investment in basic research reflects the Congress’ growing concern that China and other competitors are outpacing the United States in terms of research spending, as noted in the 2018 Science and Engineering Indicators report of the National Science Board.

The chart below shows that the spending increase will benefit both the foundation’s research and education accounts. However, NSF’s gains are smaller than those Congress provided to several other federal science agencies. 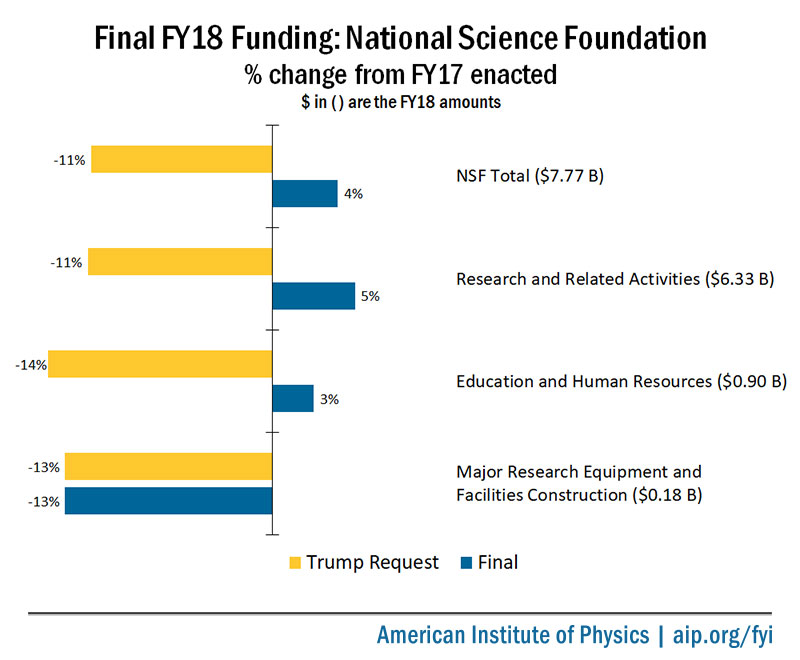 The joint explanatory statement for NSF is available here. Unless otherwise noted in the statement, language from the House and Senate Appropriations Committee reports stands as congressional direction. Detailed tables with funding amounts for programs are available in FYI’s Federal Science Budget Tracker.

As in most years, Congress has given NSF considerable discretion on how to distribute funds among its six research directorates. The final statement does not include language that the House approved via a floor amendment that would direct NSF to shift $30 million to physical and biological sciences from other programs.

Committees comment on merit review. The House report reiterates merit review requirements enacted in the American Innovation and Competitiveness Act, and the Senate report says the committee “continues to believe that NSF should include criteria that evaluates how a proposal will advance our Nation’s national security and economic interests, as well as promote the progress of science and innovation in the United States.”

Interest in indirect costs. The statement does not provide guidance on NSF’s indirect cost rates, which determine a percentage on top of each grant that the foundation pays to the awardee’s institution to cover finance and administrative overhead. The House report, however, directs NSF to address the Government Accountability Office’s preliminary findings from its interim assessment of NSF’s indirect cost policies and provide a report on how GAO’s recommendations will be implemented.

Astronomical facilities divestment. The statement acknowledges NSF’s ongoing efforts to decide on future operations for several astronomical observatory facilities and directs NSF to include proposals for divestment within future budget requests. NSF’s plans to divest from the Arecibo Observatory in Puerto Rico and the Green Bank Observatory in West Virginia have prompted pushback from some members of Congress.

Polar programs. The bill provides up to $544 million for polar research and operations support, which includes funding for the Office of Polar Programs and the U.S. Antarctic program. The Senate report also encourages NSF to prioritize research into the current stability of Antarctic ice sheets, including the West Antarctic Ice Sheet, and the impacts of future instability.

The statement includes the administration’s requested $1.8 million for OPP’s $350 million Antarctic Infrastructure Modernization for Science (AIMS) project, which will replace aging facilities at McMurdo Station. It also revises the House report language to specify that funding for AIMS should fall within the Research and Related Activities account instead of the Major Research Equipment and Facilities Construction account. The administration has proposed to ramp up funding for AIMS to $104 million in fiscal year 2019.

Vortex-Southeast. The Senate report asks NSF to provide adequate resources for the Vortex-SE tornado research program focused on the southeastern U.S. in preparation for a 2020 field campaign.

I-Corps protected. Both the House and Senate reports reject the administration’s proposed 13 percent cut and direct NSF to maintain current funding for the program.

New Historically Black Colleges and Universities program. The Senate report specifies $10 million for a new HBCUs Excellence in Research program, which will provide competitive grants to HCBUs to stimulate improvement of their R&D capacity and competitiveness.

The Major Research Equipment and Facilities Construction (MREFC) budget will decrease by 13 percent to $183 million.

Report on MREFC eligibility and mid-scale research infrastructure. The House report directs the National Science Board to develop a report with the National Academies on how to “bridge the gap between the Major Research Instrumentation program and the MREFC account while also developing processes appropriate for mid-scale infrastructure, cyberinfrastructure, and instrument upgrades to be funded through the MREFC account.” NSF recently lowered the eligibility threshold for MREFC projects from $100 million to $70 million and also has requested $60 million for a new Mid-scale Research Infrastructure program in fiscal year 2019.

The Education and Human Resources (EHR) Directorate is set to increase 3 percent to $902 million.

Informal science education. The statement does not accept the administration’s request to cut funding by over a third for STEM + Computing partnerships, and instead will maintain EHR's support for the program at $52 million. It also provides the requested $63 million for the Advancing Informal STEM Learning program.