In fiscal year 2019, Congress is continuing to invest heavily in Department of Defense R&D programs to counter the increasing sophistication of rival nations such as China and Russia. Combined funding for basic research, applied research, and advanced technology development is increasing by 7 percent to almost $16 billion.

In fiscal year 2019, which began Oct. 1, funding for Department of Defense Research, Development, Test, and Evaluation (RDT&E) activities is increasing 8 percent to an inflation-adjusted record high of $96.1 billion. Motivated primarily by the increasing sophistication of “near-peer” rivals such as China and Russia, Congress has passed RDT&E budget increases totaling more than $22 billion in the last six months.

Congress’ recent RDT&E funding increases have generally favored late-stage prototyping and testing activities, while smaller increases have been provided for DOD’s earlier-stage “Science and Technology” accounts: basic research, applied research, and advanced technology development. In this budget cycle, though, S&T funding is increasing commensurately by 7 percent to almost $16 billion. The boost is distributed nearly evenly among the three S&T accounts and across the military service branches. 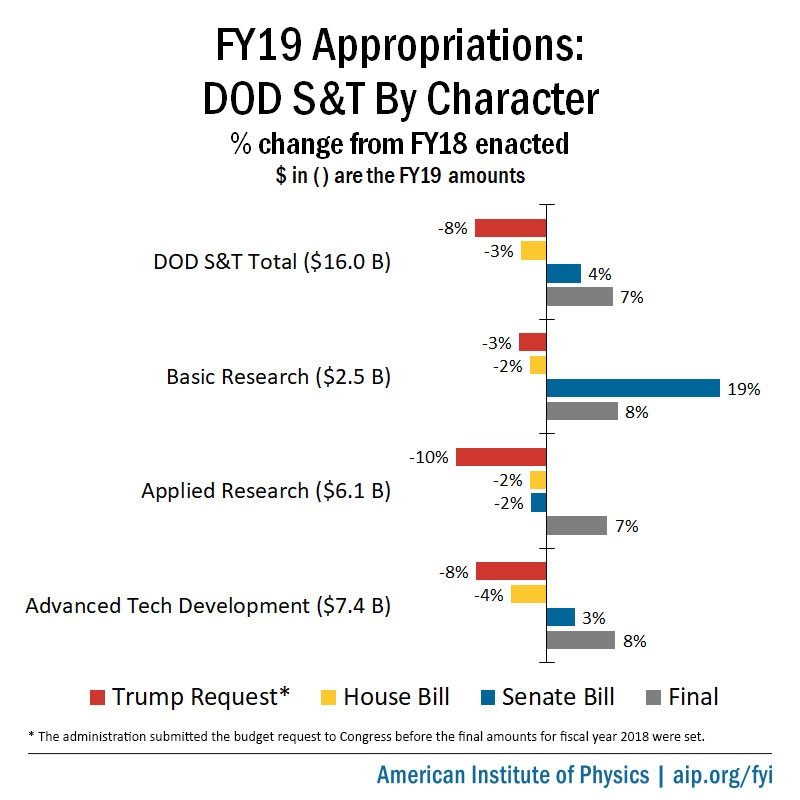 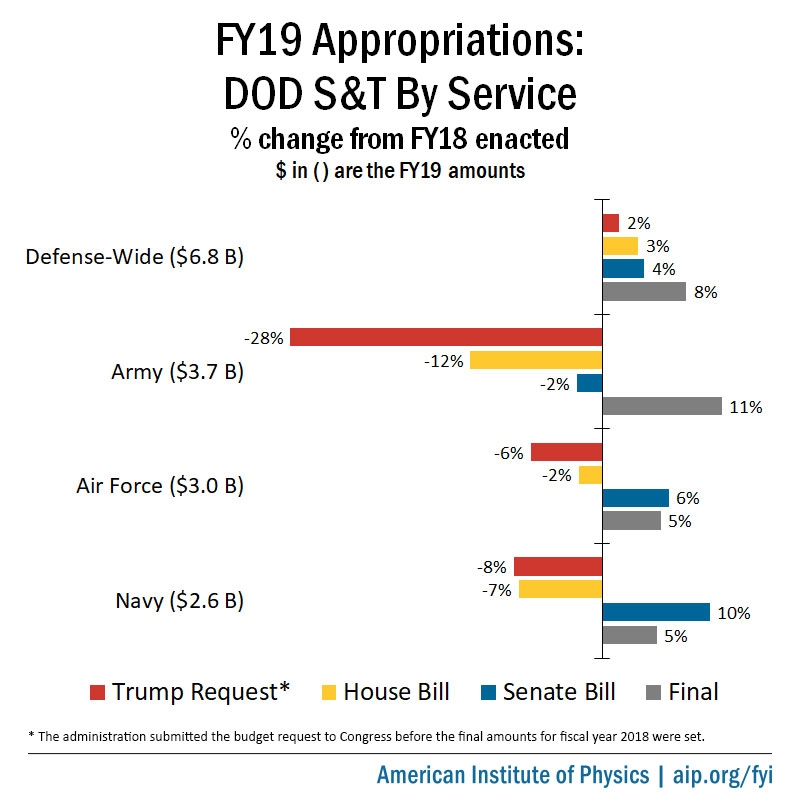 The new appropriation arrives via a two-bill spending package that President Trump signed on Sept. 28. It marks the first time in 10 years that DOD has received its appropriation by the beginning of the fiscal year.

An explanatory statement accompanying the legislation specifies funding levels for individual programs and provides policy direction. In addition, language from the House and Senate Appropriations Committee reports on their original spending proposals is valid unless negated by the final statement. DOD also receives extensive policy direction through the annual National Defense Authorization Act (NDAA), the most recent version of which was enacted in August.

Comparisons between the House and Senate budget proposals, the president’s budget request, and final amounts can be found along with account-level figures for each service branch in FYI’s Federal Science Budget Tracker.

The offices responsible for administering DOD’s RDT&E budget are currently undergoing a reorganization that began in February with the confirmation of Mike Griffin as under secretary of defense for research and engineering (R&E).

On Sept. 27, the Senate confirmed Lisa Porter as Griffin’s deputy. Porter holds a bachelor’s degree in nuclear engineering from MIT and a doctorate in applied physics from Stanford University. Early in her career, she held positions at MIT and the Defense Advanced Research Projects Agency (DARPA) before leading NASA’s Aeronautics Research Mission Directorate during Griffin’s tenure as NASA administrator. After that, she was first director of the Intelligence Advanced Research Projects Activity (IARPA) and then president of Teledyne Scientific and Imaging. Just before her move to DOD, she directed the research arm of In-Q-Tel, a nonprofit venture capital firm funded by the U.S. intelligence community.

DOD recently hired Mitch Nikolich as director of defense R&E for research and technology. He is responsible for the department’s laboratories and extramural research programs, as well as new offices dedicated to quantum sciences, directed energy, cyber technology, microelectronics, and machine learning and artificial intelligence. Nikolich holds a doctorate in electrical and computer engineering from the State University of New York at Buffalo, and early in his career he worked in the Physics Division of Los Alamos National Laboratory. He has extensive experience in strategic arms policy, having worked on the Strategic Defense Initiative, four Nuclear Posture Reviews, the establishment of DOD’s Countering Weapons of Mass Destruction Program, and several U.S. arms control delegations.

DOD has hired Jim Faist as defense R&E director for advanced capabilities. He has responsibility over test and evaluation activities as well as offices focused on emerging technologies in areas such as space and hypersonics. He holds a bachelor’s degree from the Virginia Military Institute and a master’s degree from Cornell University, both in electrical engineering. Faist has spent much of his career working for defense contractors, including as a chief engineer at Northrop Grumman and Harris Corporation.

While DOD’s budget for basic research has typically changed gradually in recent years, in fiscal year 2019 it is rising by an unusually steep 8 percent to $2.53 billion.

Defense Research Sciences. DOD’s intramural and extramural basic research programs are both funded primarily through the Defense Research Sciences line items, which are collectively increasing 8 percent to $1.62 billion, with the Army, Navy, and Air Force receiving increases of 15 percent, 9 percent, and 12 percent, respectively. Funding for basic research at DARPA is remaining essentially flat at $423 million, following a 17 percent increase in fiscal year 2018.

University and Industry Research Centers. Funding for the Army’s collaborative research centers and alliances is increasing 6 percent to $114 million.

National Defense Education Program. The NDEP budget is increasing 32 percent to $136 million, continuing the rapid climb it began in fiscal year 2018. The program aims to develop STEM talent through scholarships and fellowships as well as by supporting STEM engagement opportunities at schools near DOD facilities.

DOD’s recent investment in technology development has been spread widely among RDT&E programs administered by the department and the military service branches. However, support has also focused on a number of special initiatives and line items, selections of which are highlighted below.

Technology transition initiatives. The Air Force Tech Transition line item is increasing 38 percent to $1.45 billion, and has grown by over $1 billion since fiscal year 2017. The statement specifies that much of the funding is for advanced engine development and hypersonic and directed energy weapons prototyping. The Defense-Wide Technology Maturation Initiatives line item is more than doubling to $317 million.

Strategic Capabilities Office. The SCO budget is continuing its long and rapid climb, increasing 23 percent to $1.39 billion. The office works to develop unforeseen tactical uses for existing and near-future technologies. However, through the most recent NDAA, Congress has directed DOD to prepare a plan for SCO’s future, which could include dispersing its functions to other offices.

Defense Innovation Unit. For the first time, DIU is receiving its full requested appropriation of $29 million in R&D funding. DOD established the unit several years ago to set up contracts with universities and companies in regional innovation hubs. Although some appropriators have previously questioned whether the unit could accomplish its goals effectively, earlier this year DOD affirmed it will have a permanent place in the department’s organization.