President Trump has signed a fiscal year 2019 spending package that rejects his proposed cuts to the Department of Energy’s applied R&D programs for the second year in a row. Funding for renewable energy R&D remains stable, while government investment in nuclear energy R&D will continue its rapid increase.

On Sept. 21, President Trump signed into law a three-bill fiscal year 2019 spending package that rejects his proposal for large cuts to the Department of Energy’s applied energy R&D programs. While his administration argued much of those programs’ “later-stage” work could be left to industry, Congress has explicitly rejected that policy, stating “DOE is directed throughout all of its programs to maintain a diverse portfolio of early-, mid-, and late-stage research, development, and market transformation activities.”

In March, Congress rejected a similar set of proposed cuts in fiscal year 2018 spending and leveraged a two-year deal raising caps on government spending to significantly boost funding for the applied R&D programs. Fiscal year 2019 will bring further increases, though they are not so large as the ones in the last appropriations law. The new levels take effect at the beginning of the fiscal year on Oct. 1. 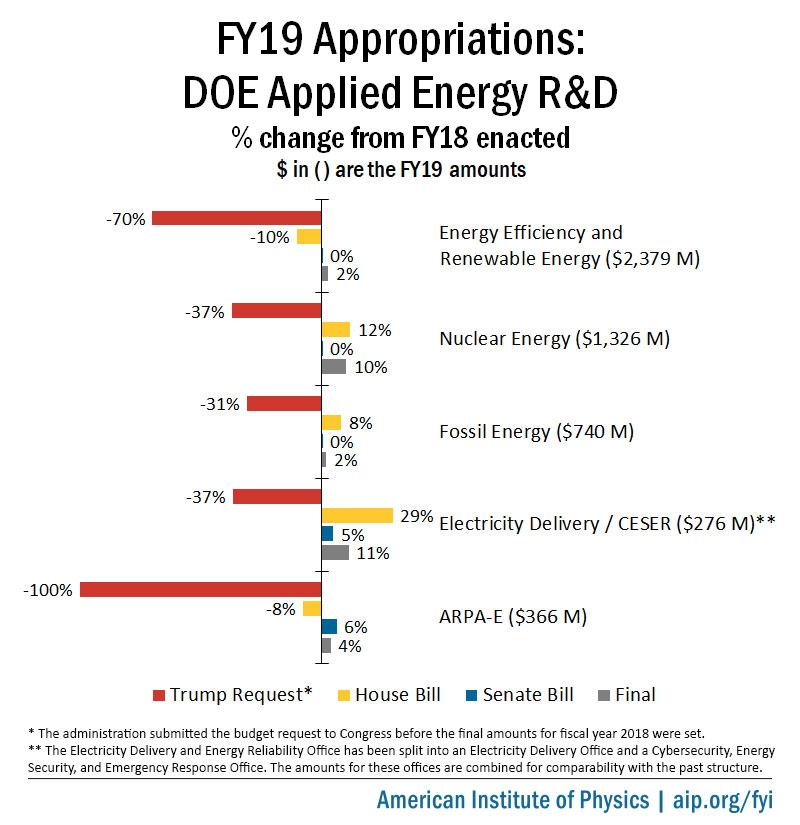 An explanatory statement accompanying the legislation specifies funding levels for individual programs and provides additional policy direction. In addition, language from the House and Senate Appropriations Committee reports on their original spending proposals is also valid unless negated by the final statement. Comparisons between those proposals, the president’s budget request, and final amounts can be found in FYI’s Federal Science Budget Tracker.

In its budget requests, the Trump administration has twice sought to terminate ARPA–E, which funds high-risk, high-reward projects. Congress has responded by increasing the agency’s funding, and in fiscal year 2019 its budget will rise 4 percent to $366 million.

The statement reinforces that DOE “shall not use any appropriated funds to plan or execute the termination of ARPA–E” and that it is “directed to disburse funds appropriated for ARPA–E on eligible projects within a reasonable time period, consistent with past practices.” In 2017, DOE temporarily withheld some ARPA–E award funds, which the Government Accountability Office later concluded was a violation of federal law.

DOE’s work in nuclear energy has benefited from several years of strong support in Congress, where there is bipartisan interest in promoting the development and commercialization of advanced nuclear reactor designs. In fiscal year 2019, the NE budget is rising 10 percent to $1.33 billion. Since fiscal year 2015, the office’s funding has increased by almost a half-billion dollars.

Reactor Concepts. The budget for Reactor Concepts R&D is increasing 37 percent to $324 million, which includes a new appropriation of $100 million to “support technical, first-of-its-kind engineering and design and regulatory development of next generation light water and non-light water small modular reactors.” In addition, $112 million is specified for Advanced Reactor Technologies, which includes $34 million for fuel and graphite qualification, $22 million to “complete the federal share of two performance-based advanced reactor concepts,” and $20 million for megawatt-scale reactor R&D.

Versatile Fast Test Reactor. Within the Reactor Concepts program, funding is increasing from $35 million to $65 million for R&D to prepare for construction of a research reactor capable of irradiating materials with high-energy neutrons. The reactor would operate as a national user facility and facilitate development of new reactor designs and fuels.

Although the project has not yet been formally evaluated, it has already garnered bipartisan support. Congress has just passed the “Nuclear Energy Innovation Capabilities Act,” which directs DOE to evaluate the mission need for the reactor and complete work on the facility by the end of 2025. Cost estimates for the project remain notional but its construction is expected to be a multibillion-dollar undertaking.

Nuclear Energy Enabling Technologies. The budget for Nuclear Energy Enabling Technologies is decreasing 4 percent to $153 million. Within that, funding for the Energy Innovation Hub for Modeling and Simulation is decreasing 8 percent from its current peak to $28 million, while Nuclear Energy Advanced Modeling and Simulation is increasing 10 percent to $31 million. Nuclear Science User Facilities will receive a 7 percent increase to $44 million. Funding for Crosscutting Technology Development will remain level at $50 million, with $10 million specified for advanced sensors and instrumentation and $10 million for hybrid energy systems.

Fuel Cycle R&D. Funding for Fuel Cycle R&D is increasing 1 percent to $264 million. Within that, Material Recovery and Waste Form Development funding will rise 27 percent to $38 million, with $7 million specified for joint fuel cycle studies and up to $20 million reserved for “highly enriched uranium recovery preparation and testing to support needs for high assay low enriched uranium.” Used Nuclear Fuel Disposition R&D funding will decrease 26 percent to $64 million, while the Advanced Fuels program will remain level at $125 million in the wake of a $57 million increase in fiscal year 2018.

Yucca Mountain. While the administration requested $168 million across DOE and the Nuclear Regulatory Commission to restart work on the nuclear waste repository at Yucca Mountain, and the House proposed $268 million, Senate resistance resulted in no appropriation for the project. 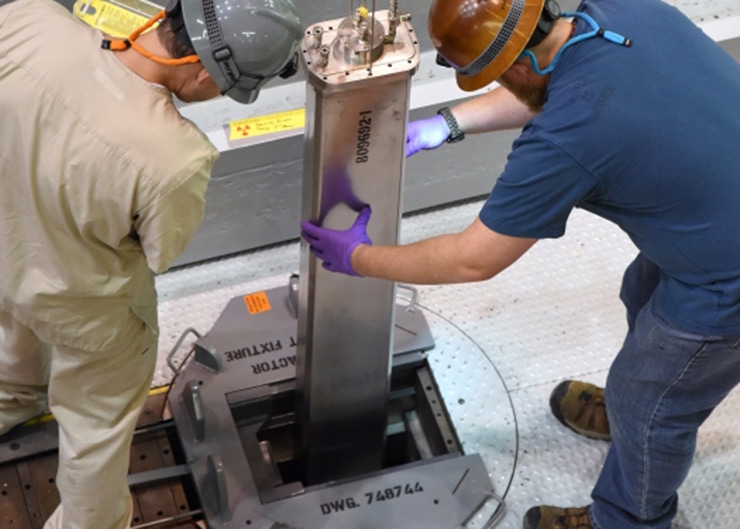 On Sept. 18, Idaho National Laboratory performed the first fueled experiment in its Transient Reactor Test (TREAT) Facility since the 1990s. The experiment prepares the way for testing fuels being developed through the Office of Nuclear Energy’s Accident Tolerant Fuels program.

The Trump administration has sought to cut EERE’s budget to less than a third of its current size. However, Congress continues to back the office’s work, increasing funding for it by 2 percent to $2.38 billion, building on an 11 percent increase in fiscal year 2018. Most EERE programs will see only small changes.

Solar Energy. The budget for Solar Energy is increasing 2 percent to $247 million. Within that, Photovoltaic R&D is rising 3 percent to $72 million and Concentrating Solar Power will remain level at $55 million, with funding for advanced thermal desalination techniques decreasing from $6 million to $5 million. The Innovations in Manufacturing Competitiveness budget will continue its rebound from a recent nadir, rising from $20 million to $30 million.

Wind Energy. The Wind Energy budget will remain level at $92 million, but funding allocated for “early-stage research on materials and manufacturing methods and advanced components” will double to no less than $30 million.

Water Power. Spending on Water Power will remain constant at $105 million, with funding allocated to “infrastructure needs at the marine and hydrokinetic technology testing sites operated by the Marine Renewable Energy Centers” increasing from not less than $1 million to not less than $5 million.

The FE R&D budget is increasing 2 percent to $740 million.

Carbon Capture and Carbon Storage. Funding for the Carbon Capture and Carbon Storage programs will remain level at $101 million and $98 million, respectively. The statement specifies $12 million for carbon use and reuse and $55 million for storage infrastructure. It also directs DOE to fulfill its prior commitments to the Regional Carbon Sequestration Partnerships (RCSPs) and provides $20 million for a competitive solicitation to fulfill the goals of the RCSPs and no less than $30 million to continue the CarbonSAFE initiative.