The president’s budget request for fiscal year 2019 would cut the Department of Energy’s applied energy programs significantly, including a 67 percent cut to the $2 billion Office of Energy Efficiency and Renewable Energy. Other offices would receive lesser but still dramatic decreases in funding.

Although the Trump administration has backtracked on some of the cuts to science agencies it proposed for fiscal year 2018, in its fiscal year 2019 budget request it has once again targeted the Department of Energy’s applied energy programs for dramatic rollbacks.

The cuts include a renewal of last year’s proposal to shut down the Advanced Research Projects Agency–Energy, and a 67 percent decrease in the current $2 billion budget of the Office of Energy Efficiency and Renewable Energy (EERE). Funding for electricity delivery programs, which would be reorganized to separate them from cybersecurity and emergency response programs, would decrease by 59 percent. The budgets of the Office of Nuclear Energy (NE) and Office of Fossil Energy would both be cut by about a quarter.

A finalized appropriations package for fiscal year 2018 is reportedly nearly complete but has not yet been released. 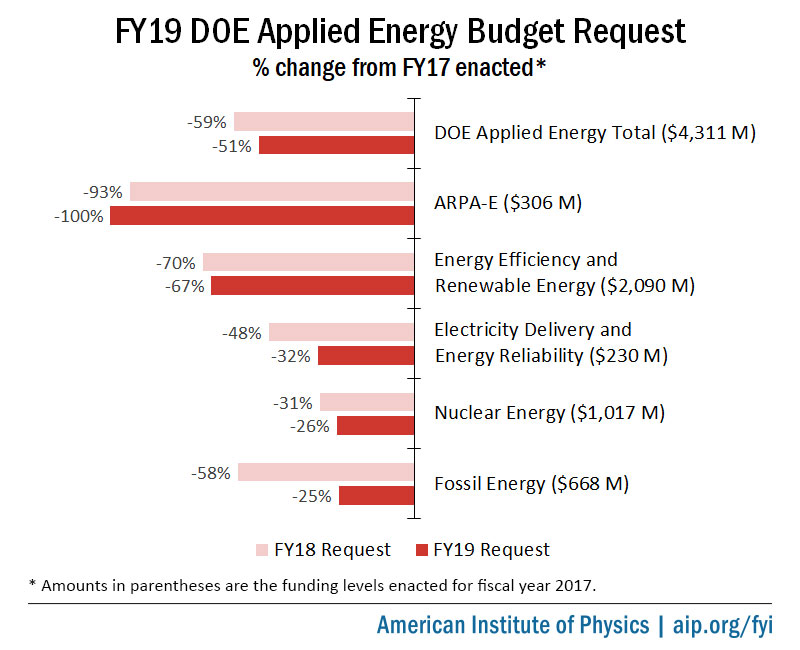 DOE’s budget justification documents is available here; information on the applied energy programs are contained in Volume 3. More details on the DOE budget are available in the Federal Science Budget Tracker on the FYI website.

Budget changes in this bulletin are measured against enacted fiscal year 2017 appropriations.

As it did last year, the administration mainly justifies its proposed cuts as part of a new focus on “early-stage” research in the expectation that industry should conduct R&D closer to the point of commercialization. The coherence and wisdom of that policy continues to be subject to scrutiny in Congress and elsewhere. Some critics note that even declared administration priorities, such as grid reliability and energy storage, are among the programs it would cut.

DOE officials are now offering additional justifications for such cuts. In February, Under Secretary of Energy Mark Menezes told reporters the “biggest reason” for cuts “is the accomplishments that these individual programs have made.”

Asked by Rep. Marcy Kaptur (D-OH) about this rationale at a hearing on March 15, Energy Secretary Rick Perry affirmed it, remarking,

One of the things I learned as an appropriator and as a governor was that just because a line item was reduced didn’t necessarily mean that that particular line item had fallen out of favor.

Observing that many DOE programs had met or exceeded their goals, Perry said such “mature” programs “don’t need to be funded going forward.” He added, “I think there’s some great celebration that needs to be going on about the successes that we’ve had, recognizing that we’ve got a lot of competition around the world and that innovation, technology is what’s going to take us to the lead.” He noted that DOE is ramping up its investment in exascale and quantum computing for that reason.

Menezes and top officials from the applied energy offices will be appearing on Thursday at a House Appropriations subcommittee hearing dedicated specifically to their budgets.

Energy Efficiency and Renewable Energy to be hollowed out

EERE is responsible for supporting R&D related to renewable sources of energy as well as for running programs for services such as weatherization assistance and the development of building energy codes. Just before submitting the budget request, the administration had been poised to seek a 72 percent cut in EERE’s budget, from over $2 billion to $576 million. Through its last-minute addendum, the administration requested an additional $120 million for the office. It is unclear which programs were allocated the additional funds.

The cut would hit two national laboratories particularly hard. EERE funding for the National Renewable Energy Laboratory would decline from $302 million to $148 million, representing about one-third of the lab’s budget. The $164 million that the National Energy Technology Laboratory receives from EERE would be virtually discontinued.

Last year, the administration sought a similarly large cut, and House and Senate appropriators diverged in the degree to which they are willing to accede to the proposal. News of their final decision awaits the release of the finalized fiscal year 2018 appropriations package. 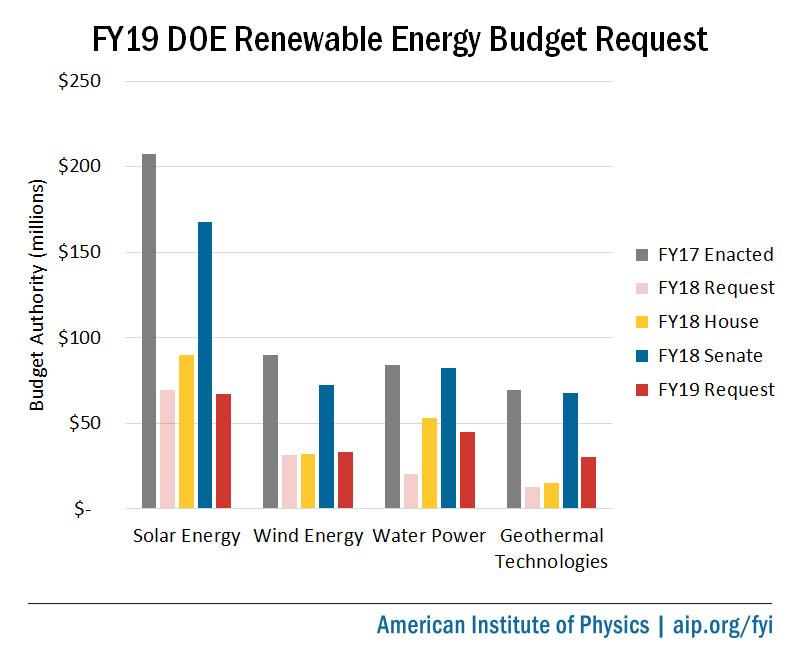 Solar energy. Under the fiscal year 2019 budget request, the budget for DOE’s solar energy programs, which were funded at $240 million as recently as fiscal year 2016, would fall to $67 million.

Photovoltaics. Funding for R&D on photovoltaics (PV) would fall over 70 percent to $18 million and focus on reliability, efficiency, and performance prediction. The DuraMat National Laboratory Consortium, which works to develop and commercialize new PV materials, would no longer support research, limiting its activities to convening researchers and maintaining a shared data hub.

Wind energy. EERE’s wind energy program would be cut by 63 percent to $33 million, of which $20 million would go to R&D. $11.5 million of the R&D funds would go to the Atmosphere to Electrons initiative to support the improvement of high-fidelity wind forecasting models, including the Exascale Predictive Wind Plant Flow Physics Modeling project.

Advanced manufacturing. Funding for EERE’s Advanced Manufacturing Office (AMO) would be cut 71 percent to $75 million, reflecting the administration’s desire to “reassert the proper role of the Federal Government by reflecting an increased reliance on the private sector to fund later-stage research, development, and commercialization of energy technologies.” The Critical Materials Hub, the Clean Water Hub, AMO’s five Manufacturing USA institutes, and its network of Industrial Assessment Centers would all be eliminated. Activities at the Carbon Fiber Technology Facility and Manufacturing Demonstration Facility at Oak Ridge National Laboratory would be “focused on the highest priority projects focused on early-stage R&D.” Funding for the High-Performance Computing for Manufacturing Program led by Lawrence Livermore National Laboratory would be prioritized, receiving $5.2 million.

A mix of proposals for Nuclear Energy

The Trump administration has expressed strong support for nuclear energy as part of its policy of achieving American “energy dominance.” Nevertheless, it would cut the budget for NE by 26 percent to $757 million, though some programs would receive increases.

Small modular reactors. No funding would be provided for the Small Modular Reactor (SMR) Licensing Technical Support program, which DOE reports met its objectives during fiscal year 2017. However, the discontinued Advanced SMR R&D program would be revived with funding of $54 million to support a “one-year effort addressing cost-shared early-stage design-related technical assistance and research and development.”

Advanced reactor technologies. Funding for R&D in advanced reactor technologies would decrease from $87 million to $74 million. The office would issue fewer competitive awards to industry while increasing R&D funding related to molten salt reactors. $5 million previously allocated to planning for the Versatile Advanced Test Reactor, which would provide U.S. researchers with a domestic fast neutron source, would be transferred to a budget account dedicated to the project.

Versatile Advanced Test Reactor. The administration is now requesting $15 million to transfer the prospective fast neutron facility into pre-conceptual design development. A number of lawmakers have been pressing to move the project forward. The “Nuclear Energy Research Infrastructure Act,” which the House passed in February, would authorize almost $2 billion overall for the reactor over fiscal years 2018 through 2025.

Fuel cycle R&D. Much of the cut to NE would fall on fuel cycle R&D, which would drop 71 percent to $60 million. Programs relating to used fuel and nuclear waste would decrease to only a small fraction of current levels. Work on advanced fuels would decrease 41 percent to $40 million and concentrate entirely on accident-tolerant fuels.

Echoing last year’s budget request, the administration is once again proposing $120 million in funding for the licensing process of the Yucca Mountain nuclear waste repository in Nevada and for interim nuclear waste storage. These programs have been at a standstill for years, and, while they have bipartisan support in Congress, storing nuclear waste at Yucca Mountain is adamantly opposed by members of the Nevada congressional delegation and a number of other lawmakers. Which way the wind is now blowing with respect to Yucca Mountain will be revealed with the release of Congress’ fiscal year 2018 spending package.

Energy storage. Funding for energy storage activities through the Office of Electricity Delivery would decline by 74 percent to $8 million. However, this represents only a fraction of the total DOE investment in the field. EERE is investing $36 million in battery R&D as well as $90 million in a new “Beyond Batteries” initiative. Within the Office of Science, funding for the Joint Center for Energy Storage Research (JCESR), an energy innovation hub located at Argonne National Laboratory, would remain level at $24 million. Last year, the administration proposed to eliminate all the hubs, including JCESR.

Cybersecurity. Funding for CESER activities would increase 21 percent to $96 million.

Congress appropriated $682 million to the Office of Fossil Energy for fiscal year 2017 for R&D, but the budget request reports that $247 million of that has been rescinded. Although the document does not identify the source of the rescission, it likely relates largely to DOE’s 2016 decision to suspend funding to the now-bankrupt Texas Clean Energy Project, a carbon capture effort.

Originally, the administration was set to propose a $302 million R&D budget for the office in fiscal year 2019, but raised that to $502 million with its addendum. Most of the office’s funding flows through the budget of the National Energy Technology Laboratory.

Advanced energy systems. Funding for the Advanced Energy Systems account would increase by 50 percent to $175 million, with large increases directed toward advanced materials and sensors.