Quantum information science and exascale computing stand out as top priorities for the Department of Energy Office of Science in the Trump administration’s fiscal year 2019 budget request, which would keep the office’s overall funding at current levels.

The Department of Energy Office of Science’s budget would remain at the fiscal year 2017 level of $5.4 billion under President Trump’s budget request for fiscal year 2019. The administration was poised to propose a $1.2 billion, 23 percent cut to the office, but the recent bipartisan budget agreement to raise discretionary spending caps led it to increase its requests for several science agencies at the last minute.

Within the office, the administration is seeking to shift resources among its six main research programs. Building off of last year’s proposal, the administration requests a large funding influx for Advanced Scientific Computing Research to accelerate DOE’s pursuit of exascale computing capabilities, which it identifies as a national imperative. The other five program offices would experience topline cuts, with the brunt falling on Biological and Environmental Research, Fusion Energy Sciences, and High Energy Physics.

Funding for quantum information science (QIS) would increase substantially across several programs to a combined level of $105 million. A summary document for the overall DOE budget identifies QIS as a top priority, citing the “emerging urgency of building U.S. competency and competitiveness” in the field.

The full budget document for the Office of Science is available here. Program-by-program highlights are summarized below and further information about current funding proposals is available in FYI’s Federal Science Budget Tracker. 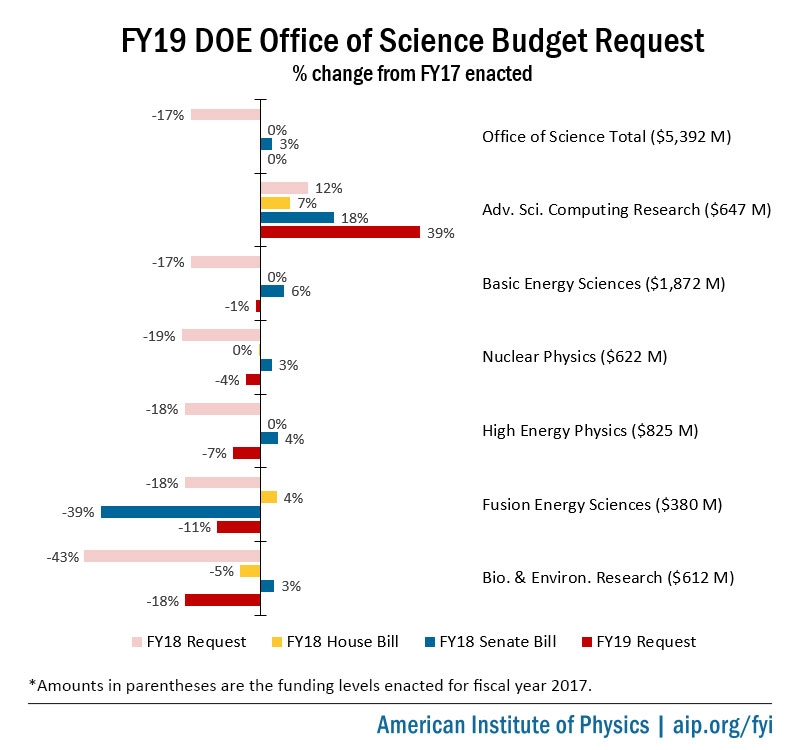 Exascale Computing Initiative. Funding for ASCR would rise by 39 percent over the fiscal year 2017 enacted level to $899 million. The lion’s share of this increase would go toward the Exascale Computing Initiative (ECI), which the Office of Science is undertaking with the National Nuclear Security Administration. ECI’s goal is to deliver at least one exascale-capable computing system in 2021 and a second system employing a different computing architecture by the following year.

Under the request, total funding for ECI would rise from the current level of $260 million to $636 million, with the Office of Science contributing $473 million. As justification for the large increase, DOE states,

U.S. dominance in computing is under threat from significant investments in Asia and Europe. This is happening at a time when advances in computing capabilities are becoming increasingly costly and risky. We cannot afford to fall further behind in an area that is critical to the American prosperity because computing impacts our national security, every sector of our economy, and every field of science and engineering.

The exascale-class system sought by ECI would have a 50-fold increase in performance over the U.S.’ most powerful system, the Titan supercomputer at Oak Ridge National Laboratory. Titan ranked fifth in the latest TOP500 list of the world’s fastest supercomputers, behind two in China, one in Switzerland, and one in Japan.

Quantum partnerships and computing testbeds. A new element of the latest request is its emphasis on the relevance of QIS to developing novel computing approaches, which will be needed to surpass the inherent limits of current semiconductor-based technologies. The budget of the $33 million Computational Partnerships subprogram would almost double, focusing on expanding basic research in QIS in collaboration with other Office of Science programs. Funding for a quantum computing testbed program initiated in fiscal year 2017 appears to remain flat, as DOE pledges “continued support” for the activity within a subprogram whose overall budget would decrease slightly.

Among research subprograms, Condensed Matter and Materials Physics would receive the largest increase, rising 22 percent to $123 million. For this subprogram, the budget document speaks of a “growing emphasis” on research into novel materials that rely on quantum phenomena and states that “quantum materials research as it relates to QIS is a priority.” It also describes a “growing emphasis on extending knowledge of radiation effects to enable predictive capabilities for the multiple extreme environments envisioned for future nuclear reactors.”

User facilities and research centers. BES supports a suite of x-ray light sources and high-flux neutron sources. The requested resources would permit these facilities to operate at about 95 percent of their optimum capacity, except for Stanford’s Linac Coherent Light Source (LCLS), which will shut down for one year as the LCLS-II project enters its final year of construction. Funding would also remain steady for a set of research centers, including the $123 million Nanoscale Science Research Centers, the $110 million Energy Frontier Research Centers, and the $39 million Energy Innovation Hubs focused on energy storage and artificial photosynthesis.

Of note, last year DOE proposed to terminate the Energy Innovation Hubs as part of its prioritization of early-stage research. Although the hubs are no longer on the chopping block, the continued emphasis on early-stage activities may influence their future research directions. In the case of the artificial photosynthesis hub, for example, DOE says the proposed budget “continues to focus resources toward the highest priorities in early-stage fundamental research on carbon dioxide reduction, with targeted decreases in activities that extend to later-stage fundamental research.”

The House recently expressed support for these and other DOE construction projects by passing a package of bills that, if enacted, would set target funding levels for each project. The levels authorized exceed DOE’s requested amounts, specifying $130 million for the APS upgrade, $50 million for the ALS upgrade, and $55 million for LCLS-II High Energy upgrade in fiscal year 2019. One of the bills also authorizes funding to upgrade the Spallation Neutron Source at Oak Ridge National Laboratory, a project on which the budget request is silent.

Climate-related research targeted. As was the case in last year’s request, proposed cuts fall hardest on the BER budget, which would decrease by 18 percent to $500 million. Funding for the Earth and Environmental Systems Sciences subprogram — called “Climate and Environmental Sciences” before DOE renamed it last year — would fall 41 percent to $182 million. With this amount, DOE says it will “continue to advance the science necessary to further develop an understanding of Earth System models of variable sophistication, targeting resolution at the regional spatial scale and from seasonal to multi-decadal time scales, and to focus on areas of critical uncertainty.”

In the 400-page document, the word “climate” appears once — a precipitous drop from the previous administration’s budget requests. As part of its justification for a new collaborative lab space at Pacific Northwest National Laboratory, DOE quotes from a MIT report that describes the increasing convergence of scientific disciplines as “a new paradigm that can yield critical advances in a broad array of sectors, from health care to energy, food, climate, and water.”

ITER decision still pending. Funding for FES would fall 11 percent to $340 million, $75 million of which would go to ITER, a long-delayed international project to build a giant tokamak fusion facility in France. The money would only go toward “in-kind” contributions, such as design and fabrication of hardware in the U.S. Last month, DOE Undersecretary for Science Paul Dabbar told the House Science Committee that the administration is still assessing whether to remain in the project and would not make a decision until after the budget came out. Of note, the committee is holding a hearing next week on the “Future of U.S. Fusion Energy Research” at which the directors of FES and the ITER project will testify.

Domestic facilities. DOE requests funds to complete improvements to DIII-D, the sole operational national tokamak facility, and to continue repairing the National Spherical Torus Experiment, which broke down in 2016 shortly after completing a major upgrade. The budget would also “initiate scoping studies to evaluate plans for an upgrade to the Matter in Extreme Conditions end station at LCLS and to assess options for a neutron source to test materials in a fusion-like environment.”

NNSA partnership program terminated. The budget request for NNSA proposes to terminate its $10 million Joint Program in High Energy Density Laboratory Plasmas, which is conducted in partnership with FES, as part of a broader proposal to downscale its inertial confinement fusion program.

No quantum leaps. Among the six program offices, FES is the only one for which quantum research is not mentioned within its section of the budget justification.

LHC upgrades and neutrino flagship facility. The HEP budget would fall 7 percent to $770 million, although funding would increase for several high priority projects. Citing the P5 prioritization report, the budget request identifies the high luminosity upgrades for the Large Hadron Collider (LHC) and its two flagship detectors, ATLAS and CMS, as the most important near-term projects. DOE requests $42 million for the accelerator upgrade and $18 million each for the ATLAS and CMS upgrades.

DOE says these upgrades will enable the LHC to ramp up to a particle collision energy of 14 teraelectronvolts and increase the collision rate by a factor of three "to explore new physics beyond the reach of the current LHC program." It also briefly notes that the National Science Foundation is “preparing a Major Research Equipment and Facility Construction (MREFC) Project to provide different scope” to the ATLAS and CMS upgrades.

The budget identifies the Long Baseline Neutrino Facility/Deep Underground Neutrino Experiment, a flagship U.S.-based particle physics facility led by Fermilab, as the highest priority large project within the P5 timeframe and requests a continued ramp up in funding. It also offers $1.56 billion as the refined total project cost estimate for the U.S. contribution and notes that DOE has secured in-kind commitments of $165 million and $88 million from CERN and the U.K., respectively, with more international contributions under negotiation.

However, the total funding requested for HEP is slightly below the more constrained of two budget scenarios used in the P5 report.

New quantum research thrust. Within the Theoretical and Computational Physics subprogram, DOE requests $28 million for a new activity focused on “QIS research techniques and algorithms, quantum computing for HEP experiments and modeling, development and use of specialized quantum controls and precision sensors.”

Facility schedules modified. The NP budget would decrease 4 percent to $600 million, largely due to funding for construction of the Facility for Rare Isotope Beams (FRIB) at Michigan State University decreasing from $100 million to $75 million in accordance with a “new baseline cost and schedule.” Development of the Gamma-Ray Energy Tracking Array (GRETA), which is designed to enhance FRIB’s capabilities, would receive $2.5 million, a reduced level from the planned funding profile. Without GRETA, the request states, “[FRIB’s] beam-times necessary for the proposed experiments will be expanded significantly, and some proposed experiments will not be feasible at all.”