By the narrowest margin in the history of the space agency, the Senate confirmed Rep. Jim Bridenstine (R-OK) as NASA administrator yesterday on a party-line vote of 50 to 49. The other chamber of Congress also made NASA news this week, with the House Science Committee advancing a NASA reauthorization bill after a contentious debate over funding recommendations for its Earth Science Division. 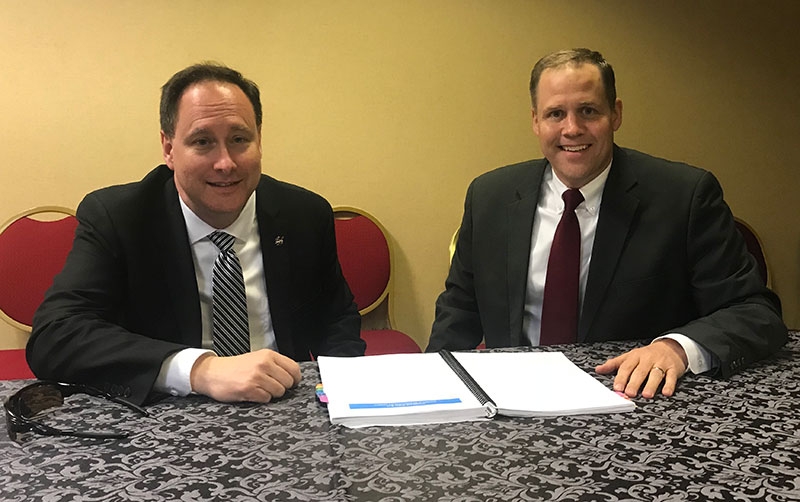 Yesterday, the Senate confirmed Rep. Jim Bridenstine (R-OK) as NASA administrator on a party-line vote of 50 to 49, with Vice President Mike Pence waiting in the wings to cast a tie-breaking vote if needed. Bridenstine’s nomination had been in limbo for months as Sen. Marco Rubio (R-FL) was opposed to it and Sen. John McCain (R-AZ) has been absent for cancer treatment, leaving Senate Republicans one vote short if Democrats remained unified in opposition.

Rubio ultimately changed his mind, saying that despite his reservations about Bridenstine, NASA’s leadership limbo should not continue given the acting administrator planned to soon step down and that shepherding a different nominee through the process would take too long. Adding to the drama, Sen. Jeff Flake (R-AZ) initially withheld his support during an equally close procedural vote related to the nomination in order to gain leverage on an unrelated matter.

Commenting on his confirmation, Bridenstine said, "It is an honor to be confirmed by the United States Senate to serve as NASA Administrator. I am humbled by this opportunity, and I once again thank President Donald Trump and Vice President Mike Pence for their confidence. I look forward to working with the outstanding team at NASA to achieve the president’s vision for American leadership in space.”

The confirmation vote was not the only contentious one for NASA this week. Two days before the Bridenstine vote, the House Science Committee held a markup on its newly unveiled “NASA Authorization Act of 2018.” Committee Democrats criticized the process used to prepare the legislation and blasted several of its provisions, including the bill’s recommendation to slash funding for NASA’s Earth Science Division. But after last-minute negotiations, the committee ultimately advanced the bill with Democratic support after adopting an amendment that restored funding for the division.

Bridenstine had long journey to confirmation

NASA administrator nominees typically sail through the Senate with little opposition, but Bridenstine faced headwinds throughout his confirmation process.

Following months of speculation that he was a frontrunner for the post, President Trump picked Bridenstine to lead NASA last September. Over his four years in Congress leading up to the nomination, Bridenstine took an avid interest in space policy, culminating with his introduction of the “American Space Renaissance Act” in 2016. Bridenstine also played a leading role in developing the Weather Research and Forecasting Act, enacted last year, championing provisions to improve tornado warning systems and explore uses of commercial weather data at the National Oceanic and Atmospheric Administration. His nomination quickly gained the support of several space industry groups and most Senate Republicans, but also drew condemnation from Democratic senators.

At the committee hearing on his confirmation, Ranking Member Bill Nelson (D-FL) argued that the head of NASA should be a technically-minded space professional, not a politician, and worried whether Bridenstine would be a divisive leader for the agency. Democratic committee members also pressed Bridenstine on his views about climate science, with one noting that provisions in the “American Space Renaissance Act” would replace science-focused items in NASA’s statutory objectives with new ones related to human space exploration.

Bridenstine worked to allay concerns that he would impose a personal or political agenda at NASA, pledging to follow relevant congressional directives and the National Academies’ decadal surveys. He also said it is “absolutely not the case” that he intended for his space policy bill to eliminate scientific research objectives from the agency's mission.

Democrats ultimately remained united in opposition. In the final floor debate, Sen. Gary Peters (D-MI) argued that the nomination reflects a broader lack of respect for science by the administration:

While this nomination is problematic due to Congressman Bridenstine’s lack of relevant qualifications and the importance of this position to our nation, I am deeply concerned that his nomination is further evidence of a deeper problem. I am concerned that this administration does not respect science, especially science in government institutions. … NASA needs an administrator who will be driven by science, not politics. Looking at all the data, from NASA to [the White House Office of Science and Technology Policy to the U.S. Department of Agriculture], I can’t help but reach the conclusion that this administration does not prioritize science, and this needs to change.

In contrast, Sen. Cory Gardner (R-CO), who partnered with Peters on writing the American Innovation and Competitiveness Act enacted last year, argued in his floor speech that Bridenstine has a breadth of relevant experience and expressed no reservations about his views on science. Gardner also pointed to an endorsement by Rep. Ed Perlmutter (D-CO), who served with Bridenstine on the House Science Committee, as evidence of bipartisan support for the nomination. In it, Perlmutter wrote,

Jim Bridenstine has a firsthand perspective on the need to better understand our Earth and the behavior of the atmosphere. He has a keen awareness of the important Earth science missions NASA is undertaking and wants to continue to advance our understanding of the planet. Despite our different political parties, I am convinced Bridenstine will lead the brilliant scientists, engineers, technicians, and outstanding personnel at NASA as it embarks on a new era of space exploration and scientific discovery. 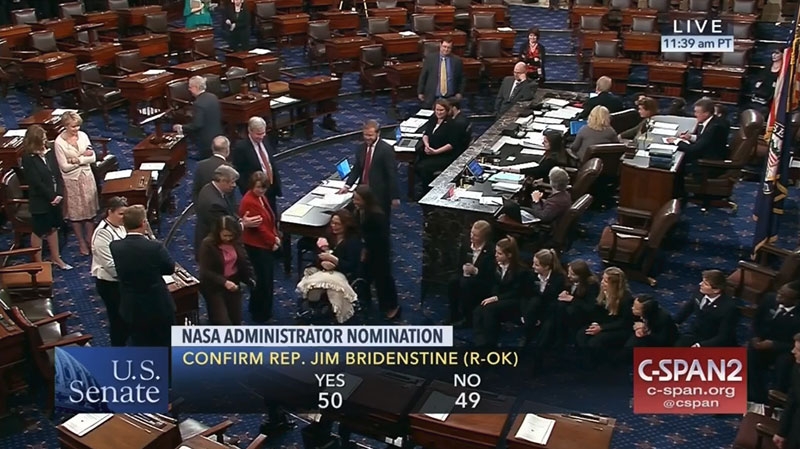 In addition to the narrowness of the final tally, the vote was historic for another reason: Sen. Tammy Duckworth (D-IL) cast her vote with her child in arm after the Senate changed its rules to permit newborns on the floor of the chamber for the first time.

The future of NASA science was also a focal point of contention in the House Science Committee's debate this week on the new NASA reauthorization bill.

The initial version of the bill advocated boosting NASA’s Planetary Science Division budget by nearly 20 percent above the fiscal year 2018 enacted level to $2.6 billion, while cutting the Earth Science Division by a quarter to $1.5 billion. It also recommends funding the Astrophysics and Heliophysics Divisions about flat with the fiscal year 2018 levels. These funding targets are not binding, as congressional appropriators ultimately decide what levels to set in spending legislation.

Stressing that NASA needs to have a “balanced” portfolio, Committee Chair Lamar Smith (R-TX) and Space Subcommittee Chair Brian Babin (R-TX) both called into question NASA’s practice of performing Earth science-related work for other agencies without reimbursement. They cited the example of how NASA has assumed responsibility for developing Landsat 9 and 10 for the U.S. Geological Survey.

Smith highlighted a bill provision that would require that “any work undertaken by [NASA] for the benefit of another agency shall be conducted on a reimbursable basis that accounts for the full cost of the work,” saying that it would offset the reduction to the Earth Science topline. Elaborating on their rationale, Babin added,

In Planetary Science, this bill increases spending for the kind of science that only NASA can do and for which NASA is the first, and perhaps only, customer, such as Mars Sample Return and missions to Europa. In a responsible way, Earth Science is correspondingly reduced.

Smith also highlighted how the bill would place a $3.2 billion cost cap on the Wide-Field Infrared Survey Telescope, which the administration has proposed cancelling. It also says that until a life-cycle cost estimate is complete, “Congress has insufficient information to judge whether or not WFIRST should be authorized to proceed.”

Committee Ranking Member Eddie Bernice Johnson (D-TX) asserted in her opening statement that the bill is “deeply flawed” and was drafted by the majority in a vindictive manner and at great speed, pointing to corrections made in the manager’s amendment as evidence. In addition to arguing that the bill endorses aspects of the Trump administration’s space policy proposals without adequate review, Johnson blasted the recommended reduction to Earth Science:

These cuts are simply another manifestation of the majority’s continued war on climate science … Where does all this money go? The majority diverts it to searching for space aliens and to the president’s unexamined initiative to build an orbiting moon base, among other things. I wish I were joking.

Clarifying that while she views the search for life in the universe as a “fascinating quest,” she believes studying the effects of climate change on Earth are ultimately more important.

Smith noted in his opening statement that the NASA Transition Authorization Act enacted last year added the “search for life’s origin, evolution, distribution, and future in the universe” to the agency’s list of formal objectives. The new authorization bill would direct NASA to partner with private sector and philanthropic organizations to search for “technosignatures” of life in the universe, such as radio transmissions, in order to meet this new objective, authorizing $10 million for the effort.

In an effort to bridge the partisan divide, the committee went into a long recess midway through the markup. After the recess, Perlmutter offered an amendment to cancel out the recommended cut to Earth Science, and the measure passed on a vote of 27 to 5.

“This was not an easy amendment for the majority to swallow,” Smith said, “but we are going forward in good faith with majority support because we want to generally and hopefully increase the prospects of this NASA bill going forward.”

After adopting several uncontroversial amendments, including one by Rep. Bill Foster (D-IL) directing NASA to study the long-term security costs associated with using high-enriched uranium for power systems it is developing, the committee approved the full bill on a vote of 26 to 7.