Lawmakers Propose Dramatic Expansion of NSF to Boost US Technology

The National Science Foundation would get a massive new technology directorate, and a new name, under a bipartisan bill unveiled this week that envisions pumping $100 billion into the agency over five years. 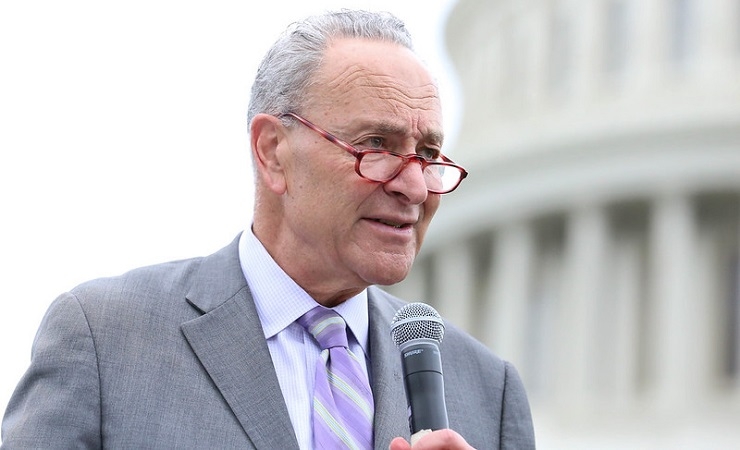 The bill would transform NSF, renaming it the National Science and Technology Foundation (NSTF) to reflect the addition of a technology directorate empowered to employ funding mechanisms distinct from those used by the agency’s existing science programs. The directorate would fund an assortment of university centers, testbeds, fellowships, and technology consortiums, with a total recommended budget rising to $35 billion within four years, dwarfing the agency’s current $8.3 billion topline. The bill also proposes to create a multi-billion dollar technology hub program within the Commerce Department focused on catalyzing R&D partnerships in areas that are not already leading centers of innovation.

The bill’s other sponsors are Sen. Todd Young (R-IN) and Reps. Ro Khanna (D-CA) and Mike Gallagher (R-WI), who with Schumer say the bill responds to the technological and economic challenge presented by China and other countries. The legislation is also the latest and most ambitious in a series of bills now pending in Congress that propose large increases in federal support for science and technology.

A primary mission of the NSTF’s technology directorate would be to accelerate the translation of fundamental research advances into “processes and products that can help achieve national goals,” focusing on no more than 10 “key technology areas.” The bill stipulates these goals must be tied to “economic competitiveness, domestic manufacturing, national security, shared prosperity, energy and the environment, health, education and workforce development, and transportation.”

The technology focus areas would be determined by the NSTF director in consultation with an advisory board and revisited every four years, though the bill establishes an initial set of 10:

Oversight. To manage the directorate, the bill would create a new presidentially appointed position of deputy director for technology, while the agency’s science programs would be overseen by the existing, currently vacant deputy director position. The technology directorate’s aforementioned advisory board would have 12 members appointed to three-year terms. The top two lawmakers from each party in the House and Senate would each appoint two board members, and the NSTF director would fill the remaining four spots. The board would have no decision-making authority and the existing 24 member National Science Board would retain oversight of the whole agency.

Funding mechanisms. The bill permits the directorate to award grants and contracts to universities and nonprofit entities as well as consortiums led by universities that can include for-profit companies and entities based in “treaty allies and security partners” of the U.S., among other groups. It also authorizes the directorate to fund research at other federal agencies and other NSTF directorates. The bill proposes the directorate receive initial funding of $2 billion in fiscal year 2021, ramping up to $35 billion in fiscal years 2024 and 2025, with a total five year budget of $100 billion. Within this budget:

Science budget protection. The bill includes a “hold harmless” clause that would prevent the technology directorate from receiving any funds if the budget appropriated for the rest of the agency declines year over year in inflation-adjusted terms. It also prohibits the NSTF director from transferring funds to the technology directorate that were originally appropriated to other parts of the agency.

Personnel flexibilities. The directorate would be granted a number of special hiring authorities, including those used by the Defense Advanced Research Projects Agency. The bill also states that employees of the directorate “may” include program managers who “shall perform a role similar to program managers employed by DARPA.” DARPA is known for giving its program managers considerable leeway to drive toward targeted R&D outcomes. By contrast, NSF traditionally uses community-based peer review of grant proposals to shape research directions, though program managers retain final authority over funding decisions.

Regional technology hubs. The technology hub program would be jointly administered by the U.S. Economic Development Administration and the National Institute of Standards and Technology. With a recommended budget of $10 billion over five years, the program would fund between 10 and 15 consortiums in “localities that have clear potential and relevant assets for developing a key technology focus area but have not yet become leading technology centers.“

Each consortium must include an institute of higher education, local and state government representatives, and an economic development organization. They also may include nonprofit organizations, for-profit companies, federal laboratories, and Manufacturing USA institutes. The bill stipulates that the consortiums must provide matching funding, with the allowed federal share ramping down from 90% to 75% over four years.

Authorized uses of the funds include workforce education and retraining, building up domestic supply chains, and creating regional venture funds and loans for technology commercialization. They could also be used to further develop technology produced by the NSTF’s university technology centers.

National strategy report. The bill would require the White House to periodically produce a plan for improving competitiveness in science and innovation to support the National Security Strategy, a document that is typically produced early in each presidential administration.

The provisions in the Endless Frontier Act, including the $100 billion proposed for the NSTF Technology Directorate, resemble ideas that Schumer first floated last year. The bill’s title is a reference to the report Science – The Endless Frontier, which was published 75 years ago this summer and is credited with spurring Congress to create NSF five years later.

Explaining the motivations behind the bill, its sponsors point to China’s aggressive investments in technology as well as the ongoing COVID-19 crisis. Schumer wrote in a statement, “The coronavirus pandemic has shown the science and technology gap between the United States and the rest of the world is closing fast and that threatens our long-term health, economic competitiveness, and national security.”

In his own statement, Young remarked, “By virtue of being the first to emerge on the other side of this pandemic, the Chinese Communist Party is working hard to use the crisis to its advantage by extending influence over the global economy. Instead of allowing Beijing to threaten our values and interests, now is the time for America and our allies to invest in ourselves and give the world a clear alternative.”

University leaders have been quick to applaud the bill’s vision, though some observers worry that creating the technology directorate might distract from NSF’s longstanding mission to support fundamental research.

Arden Bement, who directed NSF from 2004 to 2010, told Science magazine that he believes it would be a “mistake” to create the directorate. “Federal funding for applied technology research and development should be need-based and channeled through mission agencies,” he argued.

France Córdova, who ended her six-year term as NSF director this March, told FYI she is enthusiastic about the proposal and disputed the idea it might dilute NSF’s mission.

“I look at it as just the opposite,” she said, explaining that in the decades since the founding of NSF there is now “more seamless integration of the very basic fundamental research and what people have called the use-inspired and more applied research.”

She said the potential alternative of creating an entirely new agency would be too time-consuming, noting the five years it took to establish NSF. “We don't have another five years to lose,” she said.