House appropriators have advanced legislation that would provide billions of dollars in one-time “emergency” funding to DOE, citing a need to support economic recovery from the coronavirus pandemic. The additional funds include $6.25 billion for research facilities and equipment projects within the DOE Office of Science. 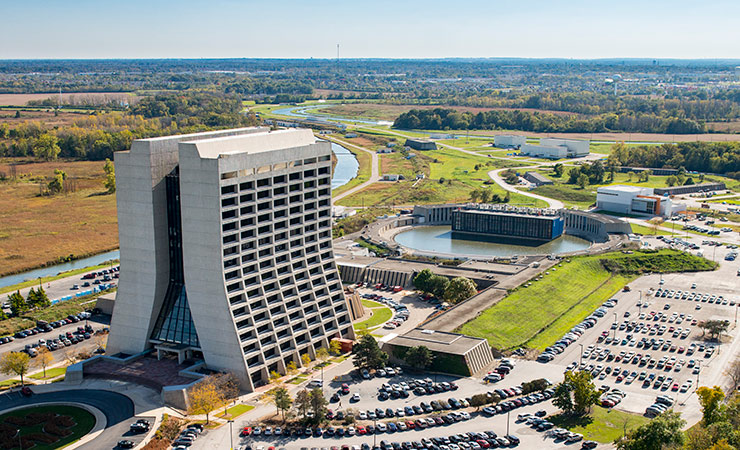 House appropriators have put forward a proposal to provide billions of dollars in "emergency" funding for the Department of Energy. Projects at Fermilab would receive hundreds of millions of dollars, including $100 million for renovations to the lab's iconic Wilson Hall, pictured here.

On Monday, the House Appropriations Committee approved fiscal year 2021 spending legislation for the Department of Energy that includes a modest increase to its base budget as well as $23.5 billion in additional one-time funding. The committee explained the add-on is intended to “support the economic recovery from the coronavirus pandemic. ”

The committee emphasizes that the additional funding will support the expanded use of clean energy and energy efficient technology through demonstration projects and capital projects. However, significant portions of the funding would also go to environmental cleanup at DOE sites and to research facility and equipment projects. Within the Office of Science, a total of $6.25 billion is divided among 67 projects.

Republican members of the committee have opposed the proposal, complaining they were not consulted about the extra funding and objecting to its inclusion as an “emergency” expenditure, which would circumvent statutory caps on federal spending. However, several House Republicans have signed onto another bill that proposes nearly $25 billion to compensate for pandemic-related disruptions to research. Though only a recommendation, that money could be provided through future pandemic relief legislation.

Details on pending and enacted legislation focused on pandemic response and recovery are collected in FYI’s Federal Science Budget Tracker.

The projects the DOE appropriations bill would fund within the Office of Science are at various stages of work. For instance, $75 million is allocated for SLAC National Accelerator Lab’s Linac Coherent Light Source II facility, which is nearing completion and has already received its final expected construction appropriation. Meanwhile, $448 million is specified for the Electron-Ion Collider at Brookhaven National Lab, which is still in its early planning stages and will not begin construction for several years at least.

The bill specifies that the funds provided would “remain available until expended,” meaning they could be held until they are needed. However, they could also be used to speed up projects where possible or pay certain project costs in advance. The following chart illustrates the contribution the emergency spending would make toward completely funding selected projects. For many smaller projects not shown, the spending would cover essentially the entire cost of construction. 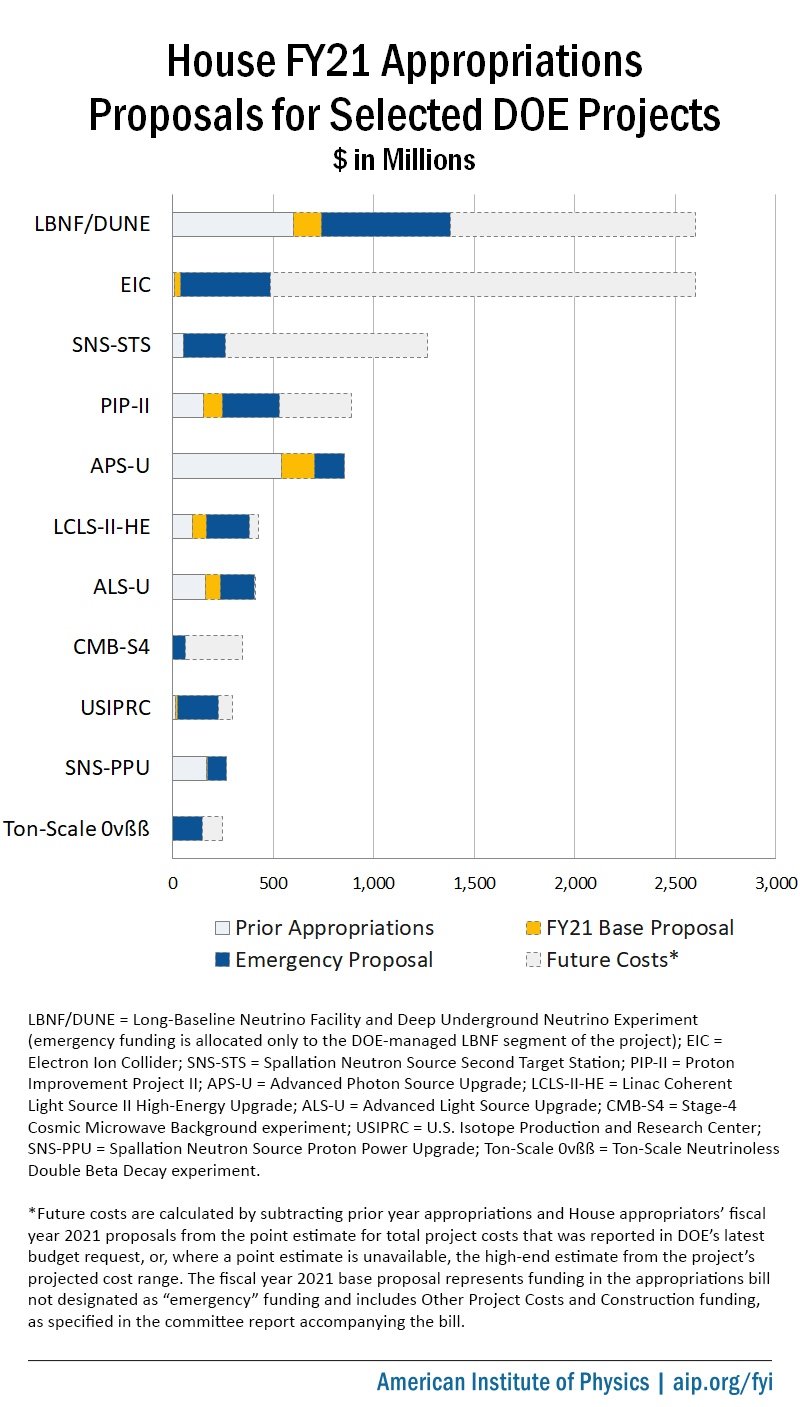 A number of the bill’s larger proposals are not included in the above chart as they do not correspond to items for which DOE specifies total project costs. These include a combined $772 million for the procurement of exascale computing systems at Argonne and Oak Ridge National Labs, $65 million for the U.S. contribution to the international ITER fusion energy project, and $200 million for computing and equipment at CERN’s Large Hadron Collider. The bill also specifies $75 million for the Quantum Information Science Research Centers that DOE is expected to announce soon.

Notably, the bill does not describe the emergency funds as compensating for expenses related to the COVID-19 pandemic, though the pandemic is increasing the total cost of some of the projects that would receive additional funding. Office of Science facilities director Mike Procario outlined possible scenarios for pandemic-related cost and schedule growth for high energy physics projects at last week’s meeting of the High Energy Physics Advisory Panel, noting some projects will definitely need to revise their baseline cost and schedule.

At the same meeting, Office of Science Director Chris Fall was asked about how the research community could help obtain relief. He replied that it is not DOE’s place to lobby Congress for extra funding and that his office is focused on providing accurate information concerning the costs it is facing. He remarked,

One thing I’m being very careful to do with my own team is to be crystal clear that what we say are COVID impacts are really COVID impacts. It’s not going to be our position to start padding the fix with a lot of bells and whistles because we think it’s an opportunity.

Fall added that, for the community’s part, distinguishing between identifying pandemic-related needs and making a more general case for increased investment “probably is worth contemplating” as well.

Outside the Office of Science, the bill’s add-on funding for DOE is split between R&D programs, environmental cleanup, and programs that subsidize clean-energy and energy-efficient vehicles, buildings, and infrastructure.

The bill includes $250 million for the Advanced Research Projects Agency–Energy above a proposed base budget of $435 million to support additional technology demonstration projects. The bulk of the $7.8 billion in emergency spending allocated to the Office of Energy Efficiency and Renewable Energy would go toward weatherization and energy efficiency projects, with $1 billion of the remainder directed to electric vehicle infrastructure, $500 million to advanced manufacturing activities, and $100 million for hydrogen technology projects.

Within the Office of Electricity, $2 billion is included for grants and demonstrations related to electric infrastructure resilience and security, $500 million for energy storage demonstration projects, and $57 million for work on the Grid Storage Launchpad facility planned for Pacific Northwest National Lab.

For the Office of Fossil Energy, the bill specifies $750 million for a carbon capture and utilization technology commercialization program, $240 million for demonstrations of negative emissions technologies, and funds to support an array of R&D facilities, including $25 million for a Direct Air Capture Center.

Although the appropriators elected to concentrate on economic stimulus in their bill for DOE, their proposal for the National Institutes of Health includes $5 billion in emergency funding that “may be used to offset the costs related to reductions in laboratory productivity resulting from interruptions or shutdowns of research activity.” The appropriators’ spending bills for other science agencies include no emergency funding to address pandemic disruptions or support research-related capital projects.

During committee meetings held to advance the bill, the lead Republican appropriator for DOE, Rep. Mike Simpson (R-ID), made clear that Democratic members were responsible for including the extra funding. He complained it was done “without discussion, let alone buy-in from any House Republicans,” and that it undermines the agreement on overall federal spending levels that Democrats and Republicans reached last year.

Simpson further suggested the Democrats decided to include the spending in appropriations legislation after the Senate refused to take up the pandemic relief legislation they passed in May, largely along partisan lines. He predicted the emergency funding would encounter similar obstacles and needs to be dropped before Congress can pass a final spending bill.

In her own remarks, Committee Ranking Member Kay Granger (R-TX) added, “I can’t support this additional spending because there was not serious discussion with members on our side of the aisle.”

Although the House may pass their proposals without broad Republican support, Republican leaders in the Senate would still have to go along with them, either as part of an appropriations deal or a new pandemic relief package. To date, they have made no public comments on the subject, though their lead appropriator for DOE, Sen. Lamar Alexander (R-TN), is a strong advocate for the Office of Science and expanding federal energy R&D spending.

Should negotiations funnel the House appropriators’ proposals into a separate relief bill, those proposals could compete or be integrated with those included in the Research Investment to Secure the Economy (RISE) Act.

Reflecting advocacy by universities and scientific societies, the RISE Act recommends that Congress appropriate supplementary funding for science agencies to cover costs stemming from pandemic-related disruptions to researchers and their work. This would include $10 billion for NIH, $5 billion for DOE, $3 billion each for the National Science Foundation and Defense Department, and $2 billion for NASA.

The legislation was introduced in the House last month by Rep. Diana DeGette (D-CO) and Rep. Fred Upton (R-MI), the lead Republican on the Energy and Commerce Committee’s Energy Subcommittee. While it is backed mainly by Democrats, the bill has the support of Science Committee Ranking Member Frank Lucas (R-OK) and six other Republicans.

In a joint statement on the bill, its sponsors remarked, “Preserving our scientific infrastructure and protecting our innovation pipeline will help ensure U.S. leadership in the world and help us better respond to future pandemics.”