Democrats on the House Climate Crisis Committee have released a legislative framework for the U.S. to reach net-zero greenhouse gas emissions by 2050, recommending massive investments in clean energy technologies alongside decarbonization policy measures.

The House Select Committee on the Climate Crisis released a “congressional action plan” last week that conveys legislative steps the panel’s Democrats believe are needed for the U.S. to reach net-zero greenhouse gas emissions by 2050. Produced by committee staff, the 547 page document is a culmination of efforts that began when Democrats set up the committee after gaining control of the House early last year.

The plan’s goals are based on emissions reductions that the Intergovernmental Panel on Climate Change has concluded are needed to restrain global warming to 1.5 degrees Celsius. To meet them, the plan recommends Congress take broad actions across 12 “pillars” that encompass different economic sectors and decarbonization policy issues. In the areas of science and technology, these actions include substantially increasing investment in clean energy R&D and strengthening support for climate science research across federal agencies.

In a response statement, Republican committee members complained that the plan had not been developed through a full bipartisan process. They also argued the recommendations could impose burdens domestically while failing to address other countries’ climbing carbon emissions, though they expressed general support for “policies rooted in innovation.”

Highlighting the importance of future technologies to rapid emissions reduction, the plan states, “Robust innovation policy at all process stages — research, development, demonstration, and deployment — will be critical to the timely and widespread implementation of new clean energy and other decarbonization technologies.”

It specifically calls for the U.S. to recommit to Mission Innovation, an international initiative to advance clean energy technology launched in association with the 2015 Paris Agreement. When it joined Mission Innovation, the U.S. set a goal of doubling federal spending on clean energy R&D to $12.8 billion by 2021. The plan states the U.S. is currently behind pace to meet that target and should treat it as an “initial objective,” highlighting a recommendation from the Bill Gates-affiliated investment group Breakthrough Energy that the U.S. increase energy innovation funding to $35 billion over 10 years. It notes that level is comparable with the current budget of the National Institutes of Health and recommends increases be spread across several agencies in addition to the Department of Energy.

Within DOE, the plan calls for increasing the budget of the Advanced Research Projects Agency–Energy from its current level of $425 million to $2 billion by 2030, building on the bipartisan goal in the pending ARPA–E Reauthorization Act of reaching a budget of $750 million in 2024. The plan further recommends the agency’s budget eventually grow to $3 billion to bring it in line with Defense Advanced Research Projects Agency funding.

The plan also makes a series of proposals concerning how DOE should fund clean energy innovation. For instance, it argues that technology demonstration projects have been insufficiently funded and recommends Congress increase funding for both pilot-scale and large-scale demonstrations, the latter at an initial level of $1 billion per year. It further suggests DOE establish a new office dedicated to supporting and coordinating such projects.

The plan also recommends legislative paths to spur clean energy commercialization, highlighting the IMPACT for Energy Act, which aims to raise private sector funds to support the energy innovation pipeline. In addition, it suggests DOE establish “Clean Tech Incubators and Accelerators” aimed at helping startups commercialize technologies and expand support for Lab-Embedded Entrepreneurship Programs, which is the subject of a bill pending in Congress. The report cites the successes of existing programs such as the Cyclotron Road at Lawrence Berkeley National Lab, Chain Reaction Innovations at Argonne National Lab, and Innovation Crossroads at Oak Ridge National Lab.

Encouraging a focus on regional innovation, the plan points to recently introduced legislation that would direct DOE to manage a network of institutes to help connect energy technology projects to local economies and overcome barriers to market deployment. It also states that DOE should “engage stakeholders and frontline communities who will benefit from or could be harmed by … emerging technologies” to encourage a two-way transfer of knowledge and help ensure “no community is left behind in the transition to a clean economy.”

Concerning DOE’s statutory authority, the plan supports updating it to include an explicit focus on energy sector decarbonization and climate change mitigation and resiliency. It also contends that DOE’s organizational structure is “outdated and cannot adequately address the climate crisis,” pointing particularly to its separation of basic science and applied R&D programs. As an interim step preceding a broader reform, it proposes that Congress reconstitute the position of under secretary for science and energy as well as create new assistant secretaries for transportation, buildings, and manufacturing and industry, elevating those portfolios out from within the Office of Energy Efficiency and Renewable Energy.

On the science of climate change, the plan recommends an array of actions aimed at shoring up the government’s capacity to understand climate risks and deploy mitigation measures effectively. For instance, it calls for federal climate science programs to receive expanded funding to ensure continuity of data collection and research activities.

The plan also proposes investing in research on the risks of climate intervention methods such as solar geoengineering and on associated governance approaches, should they need to be deployed “if global efforts to mitigate carbon emissions falter, and as the impacts of climate change continue to worsen.” It suggests such efforts leverage a forthcoming National Academies study on the topic and highlights the Atmospheric Climate Intervention Research Act, which would establish a geoengineering research program within the National Oceanic and Atmospheric Administration.

More generally, the plan outlines actions intended to bolster the integrity and influence of science in the federal government.

Citing concerns surrounding the Environmental Protection Agency’s planned restrictions on the use of certain scientific studies, among other Trump administration actions, the plan calls for an audit “to assess efforts by federal agencies to censor science in regulatory decision-making and to identify protocols for federal agencies to incorporate the best available science in regulatory decision-making.” It further recommends each science agency be required to adopt stronger scientific integrity policies and appoint a scientific integrity officer who is a career employee with a background in science, per the currently pending Scientific Integrity Act.

To improve Congress’ own access to sound scientific advice, the plan endorses efforts to revive the Office of Technology Assessment, such as the OTA Improvement and Enhancement Act. 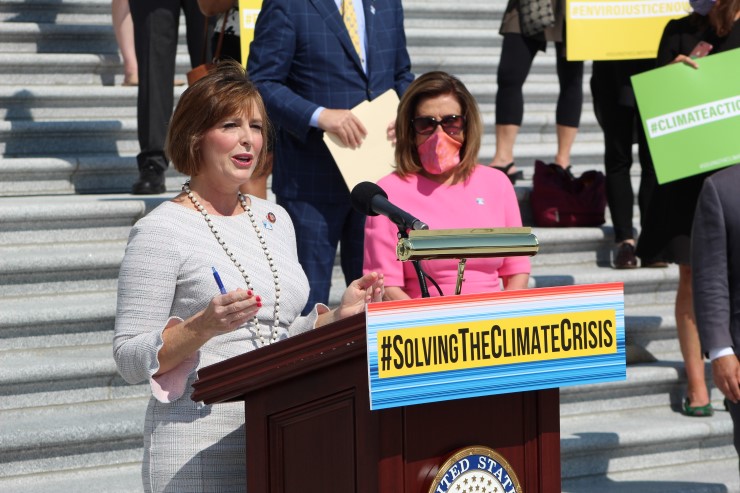 Committee Chair Kathy Castor (D-FL) and Speaker of the House Nancy Pelosi (D-CA) unveiled the committee report on June 30 at a press conference on the steps of the Capitol.

Since the Climate Crisis Committee was established, the House’s urgency on the issue has been partially supplanted by the immediate demands of the COVID-19 pandemic, which caused the plan’s original release date in March to be postponed. Addressing these circumstances, the plan’s preface observes that the problems posed by climate change and the pandemic involve parallel questions of justice and equity.

“The country’s most vulnerable populations — low-income communities and communities of color that have been hardest hit by the COVID-19 pandemic — are most at risk, as underlying demographic, socioeconomic, and health factors act as threat multipliers for the dangerous impacts of climate change,” it states.

It also links its call for action on climate change to Americans’ response to the pandemic and the recent wave of social activism, declaring,

The protests in response to George Floyd’s death are reminders of the consequences of past inaction, while responses to the COVID-19 pandemic demonstrate that Americans can mobilize en masse to save lives. Both underscore that there are no foregone conclusions. What we choose to do now shapes the future. What happens next — for racial equality, for public health, for the climate crisis — depends on us.

Republican committee members also mentioned the pandemic in their reaction to the report. “As a result of COVID-19, the nation is in a far different place than when the committee was formed last year: The economy is struggling to recover, unemployment is at a record high, and small businesses are fighting to survive. This new reality should not be neglected,” they wrote, adding, “Bipartisan recommendations to increase the resilience of our communities and address global emissions — while strengthening the American economy and getting families back to work — are worth pursuing.”

Though the plan draws on some bipartisan legislation, Republicans on and outside the committee have not embraced its 2050 net-zero emissions target.

Because the committee does not have the authority to advance legislation on its own, the plan expects other committees to take up action in their areas of jurisdiction. Some have already advanced major legislation focused on expanding clean energy R&D, decarbonizing the economy, and strengthening the transportation sector against the impacts of climate change. This week, Democratic House appropriators proposed $23.5 billion in one-time funding for DOE focused on supporting R&D and clean energy infrastructure to combat economic conditions associated with the pandemic. The House Science Committee has also announced hearings next week on the role of clean energy R&D in economic recovery and the intersection of extreme heat, COVID-19, and environmental justice.

Meanwhile, a task force working for the presidential campaign of former Vice President Joe Biden released its own climate change roadmap this week, outlining possible priorities should he win this November’s election.