President Trump’s latest budget request largely repeats past proposals to sharply reduce funding for non-defense R&D programs across the federal government. However, it includes a stronger emphasis on research tied to the administration’s “Industries of the Future” focus areas, especially artificial intelligence and quantum information science. 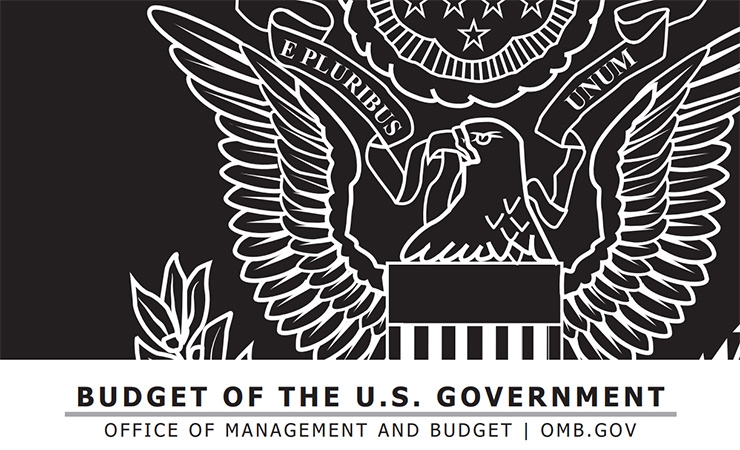 A portion of the cover design for the White House Office of Management and Budget’s main budget document.

The fiscal year 2021 budget request that President Trump released yesterday seeks broad reductions in non-defense spending, including major cuts to R&D programs that echo ones in his three previous budget proposals. According to summary R&D figures included in the budget, federal support for basic research would drop 6% to $41 billion and support for applied research would drop 12% to $39 billion. As before, many of the cuts are aimed disproportionately at energy R&D and environmental research programs.

To date, lawmakers in Congress have repeatedly rejected Trump’s proposed cuts and instead increased R&D budgets at many agencies, in some cases to historically high levels. There are, moreover, several bills pending in Congress or in the works that suggest there is a significant bipartisan appetite for even larger boosts to R&D in the years ahead.

Nonetheless, the spending restrictions that Congress imposed on itself through the Budget Control Act of 2011 will remain in place for one more fiscal year. Because next year’s caps leave little room for additional spending, congressional appropriators may have to weigh support for established programs against increases proposed for areas such as nuclear stockpile stewardship and the Artemis lunar exploration program. The budget also proposes a major two year ramp up in non-defense spending on quantum information science (QIS) and artificial intelligence, in accord with the administration’s prioritization of “Industries of the Future.”

Highlights from selected science agencies are summarized below, and detailed figures are collected in FYI’s Federal Science Budget Tracker. 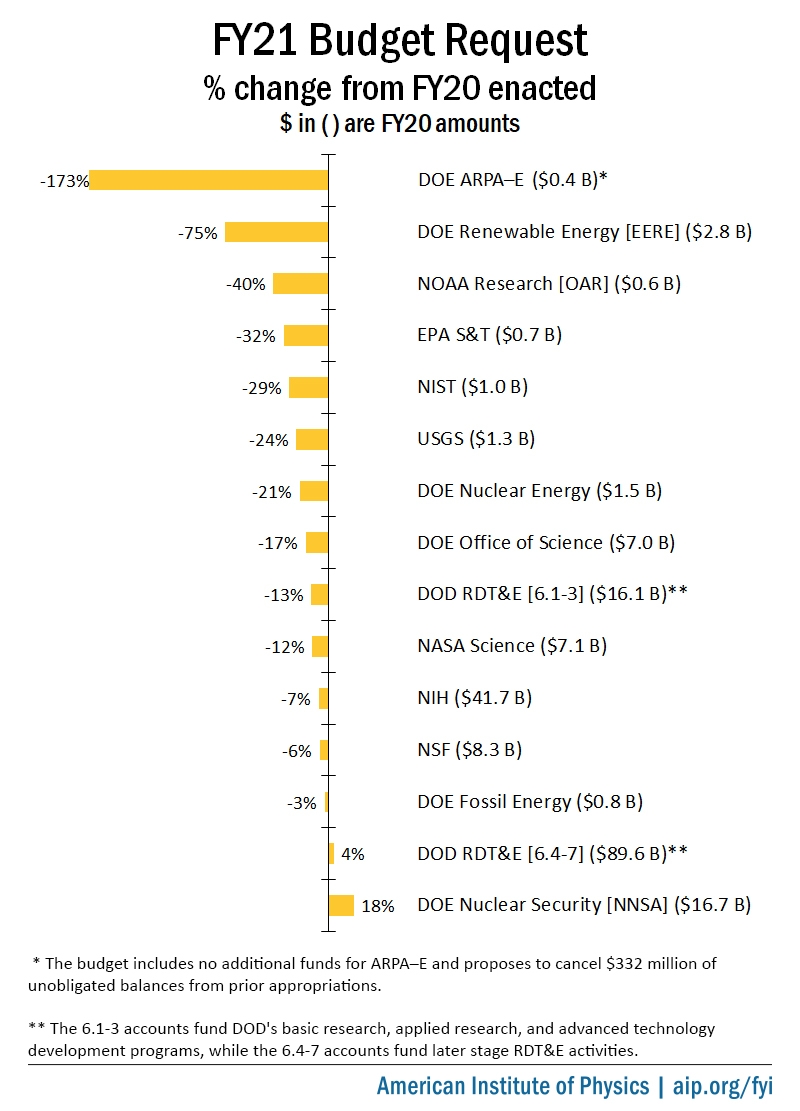 DOE published a “budget in brief” yesterday and is expected to post more detailed documentation in the coming days. Its proposal continues the administration’s pattern of seeking large increases to support ongoing modernization of the nuclear weapons enterprise while calling for steep cuts to basic and applied energy R&D programs and the closure of the Advanced Research Projects Agency–Energy.

Office of Science. Funding for the office would drop 17% to $5.8 billion under the proposal. Five of the office’s six programs would see cuts, while Advanced Scientific Computing and Research would receive a marginal increase. The White House proposes that the office increase spending on QIS from its current level of about $195 million to $237 million. The funds would support DOE’s creation of new QIS research centers and work on the administration’s newly announced goal of building out a “quantum internet.” Funding for AI would likewise increase, from $71 million to $125 million. The proposed budget also supports early work on Brookhaven National Laboratory’s Electron-Ion Collider, a new Cryomodule Repair and Maintenance Facility construction project, and the Cosmic Microwave Background-Stage 4 experiment. 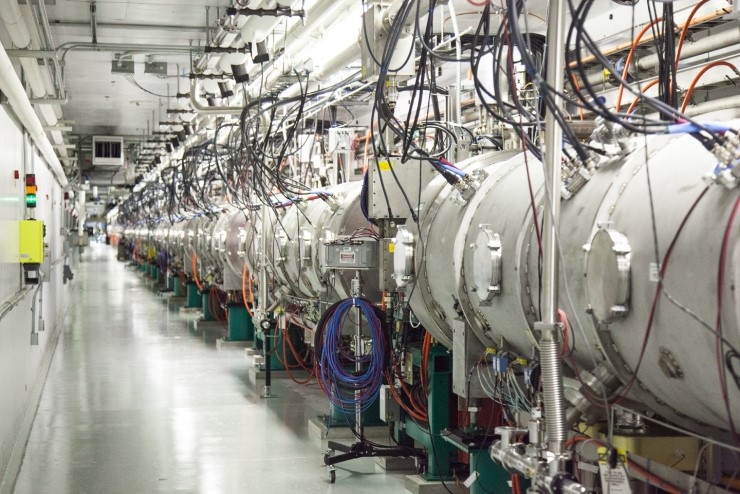 National Nuclear Security Administration. The budget for NNSA would surge 18% to $19.8 billion in support of warhead life extension activities and associated infrastructure revitalization efforts. The administration proposes to restructure the budget for weapons-related R&D activities under a new Stockpile Research, Technology, and Engineering program, which would rise 9% to $2.8 billion. Two major focus areas for the program are continued development of the Enhanced Capabilities for Subcritical Experiments project and preparation for the installation of NNSA’s first exascale computing system at Lawrence Livermore National Lab.

Applied Energy Offices. The budget for DOE’s Office of Energy Efficiency and Renewable Energy is once again facing a dramatic cut, in this case to $720 million, a quarter of its current level of $2.85 billion. The Office of Nuclear Energy’s budget would decrease 21% to $1.2 billion, with some of its programs, including the new Advanced Reactor Demonstration program, in line for steep cuts. In contrast, funding for the Versatile Test Reactor, identified as one of the department’s “highest priorities,” would ramp up from $65 million to $295 million. The Office of Fossil Energy’s R&D budget would drop by just 3% to $731 million, but its focus would shift markedly toward electricity generation technologies and away from carbon capture and sequestration. DOE also requests funds for a new crosscutting Critical Minerals Initiative and its recently announced Energy Storage Grand Challenge, which would integrate existing energy storage R&D efforts across the agency.

The administration’s budget for NSF seeks a 6% overall cut to the agency, rolling it back to just under $7.8 billion. Of the agency’s six disciplinary research directorates, only the one dedicated to computing would grow, due to the agency’s prioritization of AI research. Breaking with past proposals to significantly pare back funding for the Education and Human Resources account, it would remain about level at $931 million, within which funding for research traineeships would nearly double to $62 million in support of AI workforce development. The budget also provides full funding for three major facilities projects already underway: the Vera C. Rubin Observatory, Large Hadron Collider upgrades, and the Antarctic Infrastructure Modernization for Science project. Funding for the recently launched Mid-scale Research Infrastructure-2 program would remain level at $65 million.

On Feb. 3, supports for the Large Synoptic Survey Telescope were installed inside the observatory dome using a 500-ton crane on the top of the Cerro Pachón ridge in Chile. The facility was recently renamed the Vera C. Rubin Observatory in honor of the late astronomer.

Echoing last year’s proposal, the budget request for NIST seeks a topline cut of 29% to $738 million, a halving of facility construction funding to $60 million, and elimination of the Manufacturing Extension Partnership program. The main research account would drop 14% to $652 million, which the budget request states would lead to the elimination of 391 staff positions, about 350 of which would be from NIST’s scientific workforce. Amid the cuts to lab programs, the administration prioritizes funding for “Measurement Tools and Testbeds to Power the Industries of the Future,” which would double to $51 million, with $25 million going toward AI research.

The complete budget request documentation for NOAA is still “under review," according to the summary budget for its parent department, but the topline program numbers available from the White House Office of Management and Budget show cuts across all the agency’s major offices. The largest would fall on the Office of Atmospheric and Oceanic Research, which would see its budget drop 40% to $353 million. The administration notes that it is prioritizing the agency’s ocean mapping efforts, consistent with a November 2019 executive order on the topic and other related activities. It also repeats past proposals to eliminate the Sea Grant program and education grants.

NASA’s budget would climb 12% to $25.2 billion, with the development of crewed lunar landers for the agency’s Artemis program absorbing the increase. Artemis’ funding requirements are expected to escalate further over the next two years as NASA seeks to achieve its goal of returning astronauts to the Moon in 2024. Though funding for lunar science activities would increase from about $300 million to $452 million to support the program, the total budget for the Science Mission Directorate would decline 12% to $6.3 billion. The directorate’s flagship Wide Field Infrared Survey Telescope is targeted for cancellation a third straight year and is now joined on the chopping block by the airborne Stratospheric Observatory for Infrared Astronomy (SOFIA), which has an annual operating budget of more than $80 million. Justifying SOFIA’s discontinuation, NASA states it “has not delivered high quality data products or science on par with other large science missions.” 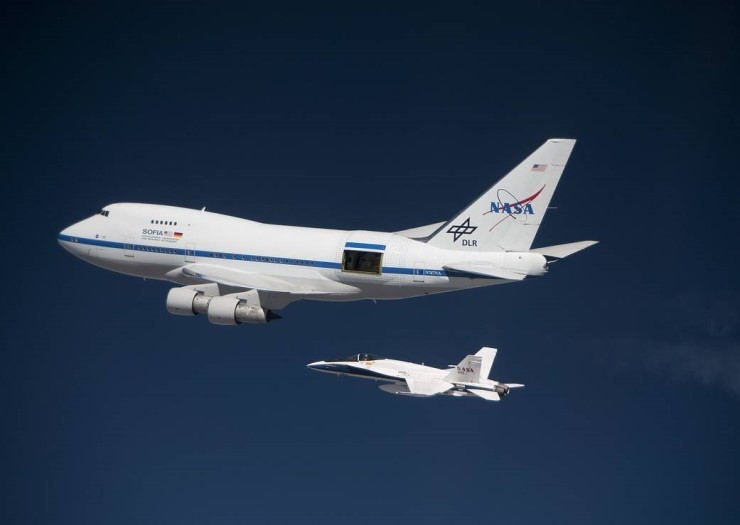 Under the Defense Department’s proposed budget, the rapid, multi-year funding increase for its Research, Development, Test, and Evaluation activities would level off at almost $108 billion. Within that, the new Space Force would have an inaugural RDT&E budget of $10.3 billion, comprising programs transferred from other accounts. As in prior years, DOD is prioritizing prototyping and testing advanced technologies. This year’s proposal emphasizes what it calls “Advanced Capabilities Enablers,” which includes $3.2 billion for hypersonics, $1.5 billion for microelectronics and 5G telecommunications, $1.7 billion for autonomous systems, and $841 million for AI R&D. Combined funding for DOD’s earlier-stage Basic Research, Applied Research, and Advanced Technology Development activities would decrease 13% to $14.0 billion. The Basic Research account, which funds in-house and extramural research programs as well as STEM education activities, would decline 11% to $2.3 billion.

The administration requests $38.7 billion for NIH, a 7% cut that would roll back the $2.6 billion increase the agency just received for this fiscal year. NIH estimates the tightened topline would result in the number of competed extramural research grants awarded dropping by about 1,900 and the anticipated grant success rate falling from 20% to 16.5%. The budget includes increases in some targeted areas, such as a $100 million boost to base funding for the Buildings and Facilities account to address NIH’s significant maintenance backlog.

Under the Department of Education’s budget request, many major grant programs would be consolidated into a single Elementary and Secondary Education for the Disadvantaged Block Grant program. This new program would subsume the Education Innovation and Research program and three formula grant programs that states and school districts can use to support a variety of STEM and non-STEM education activities. The budget also includes a 59% increase for the $1.3 billion Career and Technical Education grant program, with $90 million allocated to “support the development and implementation of innovative, evidence-based, high-quality CTE programs in STEM, including computer science.” The administration also requests $150 million to launch an initiative that supports STEM education activities at Minority Serving Institutions located in Opportunity Zones.