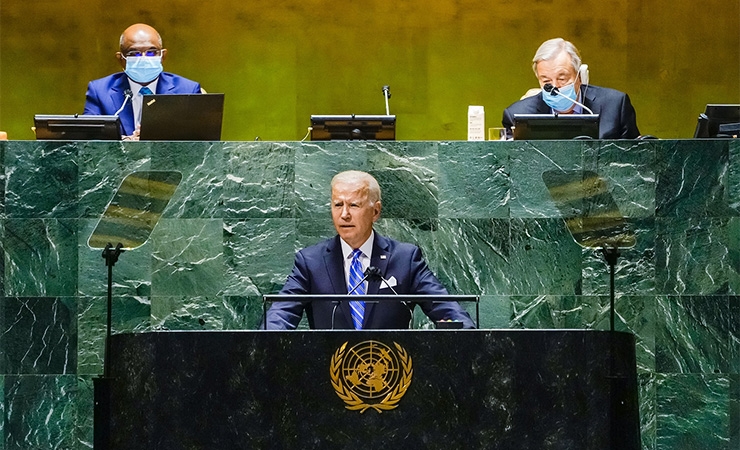 On Sept. 21, in his first address to the U.N. General Assembly, President Biden advocated for coordinated governance of emerging technologies and pressed for strong action on climate change and pandemic response. In these and other areas, he called for nations to promote human rights, shared prosperity, and democratic values, and to stand up against repressive political forces.

Biden’s U.N. visit also coincided with a series of meetings between the U.S. and partner nations. On Sept. 15, Australia, the U.K., and the U.S. announced a new partnership called AUKUS. On Sept. 24, the White House hosted a summit of the “Quad” countries: the U.S., Japan, India, and Australia. And on Sept. 29, the recently established U.S.-European Union Trade and Technology Council held its first ministerial meeting in Pittsburgh.

Through these partnerships, the U.S. is seeking to forge agreements on general principles for technology governance and to expand cooperation on matters such as technical standards and technology supply chains. The U.S. rivalry with nations such as China and Russia is an unmistakable backdrop to such efforts. However, the Biden administration is avoiding casting its technology diplomacy as a response to specific countries, and on climate and other global threats it continues to seek worldwide cooperation.

Opening his remarks to the U.N., Biden argued that the world has entered a “decisive decade” marked by both urgent crises and major opportunities for economic development.

He said that fighting the current pandemic will require a “collective act of science and political will” to expand access to vaccines and other tools such as oxygen, tests, and treatments. To guard against future pandemics, he proposed creating a new mechanism to finance global health security and a “Global Health Threats Council” to identify and monitor emerging pathogens.

On climate change, Biden reiterated his commitment for the U.S. to achieve net-zero greenhouse gas emissions by 2050 and his push for Congress to fund ambitious climate mitigation measures. He also doubled the goal he set in April for U.S. contributions to international climate-related financial assistance, to $11.4 billion annually.

As we deal with these crises, we’re also encountering a new era — an era of new technologies and possibilities that have the potential to release and reshape every aspect of human existence. And it’s up to all of us to determine whether these technologies are a force to empower people or to deepen repression.

He continued, “As new technologies continue to evolve, we’ll work together with our democratic partners to ensure that new advances in areas from biotechnology, to quantum computing, 5G, artificial intelligence, and more are used to lift people up, to solve problems, and advance human freedom — not to suppress dissent or target minority communities.”

The U.S. is currently deeply at odds with China and Russia on matters such as intellectual property exploitation, cybersecurity, social-media disinformation campaigns, and repressive uses of artificial intelligence. Furthermore, partnerships such as the Quad and AUKUS are clear efforts to build up counterweights to those countries’ regional power.

Nevertheless, Biden insisted the U.S. is not aiming to cut countries off from all cooperation. He remarked,

We’ll stand up for our allies and our friends and oppose attempts by stronger countries to dominate weaker ones, whether through changes to territory by force, economic coercion, technological exploitation, or disinformation. But we’re not seeking — I’ll say it again — we are not seeking a new Cold War or a world divided into rigid blocs.

He went on, “The United States is ready to work with any nation that steps up and pursues peaceful resolution to shared challenges, even if we have intense disagreements in other areas. Because we’ll all suffer the consequences of our failure if we do not come together to address the urgent threats like COVID-19 and climate change or enduring threats like nuclear proliferation.”

On climate change specifically, Special Presidential Envoy John Kerry has been seeking strong commitments from China ahead of the upcoming COP26 conference in Scotland, putting aside the countries’ disputes. “The stakes are very high. It’s not a matter of ideology or politics or geostrategic think. It’s a matter of mathematics and physics,” Kerry said following a meeting in China last month.

However, Chinese Foreign Minister Wang Yi rejected that reasoning, remarking, “The U.S. side hopes that climate cooperation can be an oasis in China–U.S. relations, but if that oasis is surrounded by desert, it will also become desertified sooner or later.”

The technological partnerships the U.S. is now pursuing are part of a coordinated strategy that Secretary of State Tony Blinken outlined this summer, saying, “Democracies have to pass the tech test together.”

At the AUKUS announcement, Biden highlighted that partnership’s technological aspects as contributing to its overarching goal of “ensuring peace and stability” in the Indo-Pacific region. “AUKUS will bring together our sailors, our scientists, and our industries to maintain and expand our edge in military capabilities and critical technologies, such as cyber, artificial intelligence, quantum technologies, and undersea domains,” he remarked.

A central component of the partnership is an agreement to assist Australia in acquiring nuclear-powered submarines. The arrangement has raised concerns about the sanctity of international nuclear nonproliferation regimes, since the highly enriched nuclear fuel such submarines use could be converted for use in nuclear weapons.

Australia has agreed to subject the submarine program to international nonproliferation safeguards. However, International Atomic Energy Agency Director General Rafael Grossi observed this week it would not be easy to incorporate the submarine program into existing frameworks, saying, “What this means is that we … have to enter into a very complex, technical negotiation to see to it that as a result of this there is no weakening of the nuclear nonproliferation regime.”

For its part, China condemned the submarine deal, warning it would undermine nonproliferation efforts and contribute to a “Cold War mentality.” 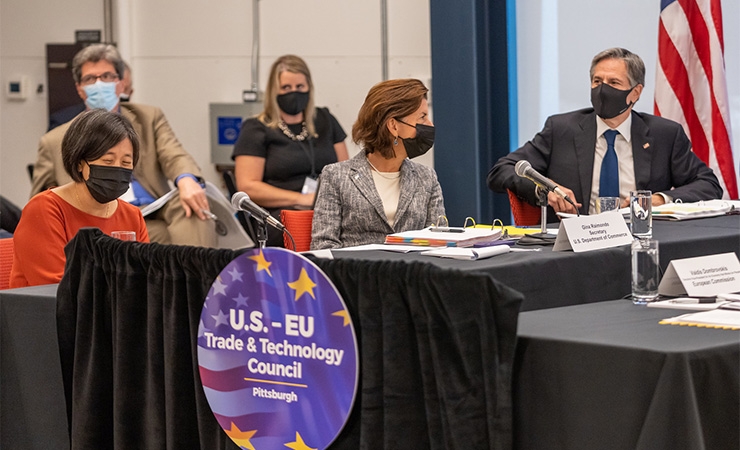 While the Quad partnership is also focused on the Indo-Pacific region, unlike AUKUS it does not have a military component. This month’s summit instead focused on pandemic response efforts, climate change, “high-standards” infrastructure, and science and technology.

Outcomes from the summit included agreements to establish a “green-shipping” network, a clean-hydrogen partnership, a semiconductor supply-chain initiative, and “contact groups” on technical standards for advanced communications and artificial intelligence.

The countries agreed to share environmental data from satellites and cooperate on climate resilience and preparedness. In addition, they will jointly “monitor trends in critical and emerging technologies, starting with advanced biotechnologies, including synthetic biology, genome sequencing, and biomanufacturing,” as well as identify opportunities for cooperation.

The Quad also released a set of shared principles covering “technology design, development, governance, and use.” These encompass issues such as technology trustworthiness and equity, R&D cooperation, research security, and adherence to “free and fair market competition.”

Most concretely, the countries announced a “Quad Fellowship” program that will annually sponsor 25 students from each Quad country to undertake graduate studies in STEM fields in the U.S. The program will be administered by Schmidt Futures, a philanthropic initiative founded by former Google CEO Eric Schmidt, and funded by companies that include Blackstone, Boeing, Google, Mastercard, and Western Digital.

The U.S.–EU Trade and Technology Council ministerial similarly resulted in a series of agreements on principles and plans for future collaboration.

Noting the security risks associated with certain technologies, these agreements include commitments to work jointly on investment screening and export controls, while also promoting trade in emerging technologies and international financing for innovation.

The U.S. and EU will also collaborate to counteract “non-market distortive policies and practices,” such as forced technology transfer, state-sponsored theft of intellectual property, and market-distorting industrial subsidies.

Negotiations over semiconductor supply chains were reportedly a point of tension in the run up to the ministerial. Currently, the U.S. and the EU are both considering providing tens of billions of dollars to bolster domestic semiconductor production and disperse chip supplies, which are presently highly concentrated in Asian countries such as Taiwan and South Korea.

Ultimately, the sides did agree to collaborate on “rebalancing” global semiconductor supply chains and affirmed they “share the aim of avoiding a subsidy race and the risk of crowding out private investment” in the industry.