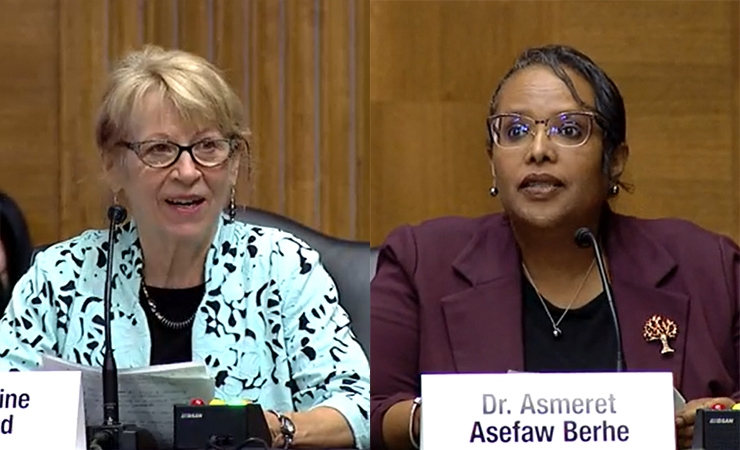 The Senate Energy and Natural Resources Committee held the nomination hearing this week for Geri Richmond and Asmeret Asefaw Berhe, President Biden’s picks for two key science roles at the Department of Energy.

Richmond, a physical chemist, is in line to be under secretary for science and energy, a position that oversees both DOE’s applied energy R&D programs and its Office of Science. Committee members roundly welcomed her nomination, citing her scientific contributions and the various leadership and advisory positions she has held in the research community.

However, Berhe’s nomination to be director of the Office of Science met opposition from Committee Ranking Member John Barrasso (R-WY), who argued her background in soil science is not well-matched to DOE’s scientific work and that she lacks experience administering large organizations.

Nevertheless, it appears likely the committee will advance her nomination. Committee Chair Joe Manchin (D-WV) expressed unambiguous support for her, saying it is “clear” she has the scientific qualifications needed for the role, and most of the questions she fielded from both Democrats and Republicans were friendly ones about DOE priorities and her expertise in issues such as carbon sequestration in soil.

In her opening statement, Richmond stressed the need to confront climate change and other problems facing the U.S., remarking, “I come before you today as the scientific challenges for our nation and our world have never been greater. I believe the magnitude of solutions outweighs even the Manhattan Project, as climate change poses an existential threat to the entire planet.”

She outlined three main priorities for the DOE R&D ecosystem. First, she said the U.S. should maintain its “pre-eminent role in every step of the process of innovation, from making fundamental discoveries, to developing new energy technologies, to ramping up the scale to mass production and deployment.” She elaborated that innovation is not a “relay race, where the baton is passed off from one stage to the next,” but rather requires discovery science programs to be ready to “intercede in technological development and deployment.”

Richmond then remarked that the department’s national labs and user facilities, Energy Frontier Research Centers, and Advanced Research Projects Agency–Energy, among other DOE entities, are “uniquely situated around the country for such long-haul mediating efforts.” She added that DOE should also strengthen connections with other federal agencies as well as with private sector and international partners.

Finally, she said she would aim to “foster a dynamic science and technology workforce that reflects the diversity of our population and geography, both urban and rural.”

Manchin opened his questions to the witness panel by asking Richmond whether she had discussed her portfolio as under secretary with Energy Secretary Jennifer Granholm. He noted that the position has been reconfigured by each of the last two administrations and that the Biden administration restored its responsibility over DOE's applied R&D programs before Granholm was confirmed.

Richmond replied that she has discussed the role with Granholm, remarking, “I must say, the nice thing about this particular position is the integration of the science and applied research.”

Sen. Martin Heinrich (D-NM) noted that Richmond oversaw the assembly of the 2018 edition of the National Science Board’s Science and Engineering Indicators report and asked her to comment on remarks she made about data it presented on China’s increasingly competitive position in research. She replied,

The numbers that came out in 2018 with regards to, basically, China starting to eclipse our capabilities was frightening, is frightening. And especially when we think of ourselves as being a leader in the science and engineering enterprise, looking at the funding that China is pumping into their technology and research is incredible. But you know, money is not the only thing. It's talent, and it's our facilities and our laboratories. And I worried then, and I still worry today that, do we have the funding we need to keep our laboratories, keep our research groups going?

However, she added that the U.S. remains a leader in basic research, particularly in the physical sciences, and cautioned against “looking over our shoulder worrying about China.” She continued, “Instead, we need to look forward like in a race and say, ‘let’s be as innovative as we possibly can,’ get our scientists on board to be able to make the kind of changes that we need in order to stay ahead and be innovators.”

In her opening statement, Berhe said her background in Earth system sciences provides her with a transdisciplinary outlook that is appropriate for handling the multifaceted nature of the Office of Science’s work. She remarked,

The integrative systems perspective that I would bring, if confirmed, is uniquely suited for this role, especially for the current time when we need to urgently address multiple issues that are critical for not just pushing the frontiers of science, but also to address the ongoing climate emergency, the need for workforce development, and to promote better understanding and trust in the scientific processes.

She continued, “It is evident that no one person can be an expert on the entirety of the wide-ranging portfolio of scientific endeavors that the Office of Science supports. My experience with scientific investigations across multiple disciplines covering spatial scales ranging from the molecular to the global, and processes that occur from seconds to geologic timescales, is an asset as we seek to address the fundamental processes that hold the key for environmental, energy, and national security challenges of our time.”

However, in his opening statement Sen. Barrasso questioned the relevance of soil science to the office’s “main scientific focus and the scientific community with which it collaborates.” Quoting from an op-ed that physicist Lawrence Krauss published in the Wall Street Journal opposing Berhe’s nomination, he said, “Past directors [of the office] have been established researchers from one of the major fields supported by the department, or they have administered large private laboratories such as Bell Labs — in line with the demands of the job.”

The office’s Biological and Environmental Research program supports science in Berhe’s area of expertise, but the bulk of the office’s $7 billion annual budget is devoted to fields such as materials science, high energy and nuclear physics, and computing. Pressing Berhe on the issue, Barrasso asked her if she has experience managing programs in such areas.

Berhe replied, “I have not worked in the area of physics, but I assure you that if I were to be confirmed for this position, no area of focus within the DOE’s vast research portfolio would be shortchanged in any way. As you know, these research priorities for DOE are set with very deliberate and thoughtful discussions and consultation with Congress and the scientific community, and I abide by those in making sure that the science remains highly supported.”

Berhe also highlighted her “well-recognized” roles in national and international research and workforce development efforts when asked by Barrasso about management experience relevant to large organizations.

Picking up the issue later in the hearing, Sen. Angus King (I-ME) asked Richmond about her confidence in Berhe. She replied, “I am fully confident that she will be capable of fulfilling the duties of that position.”

Sen. Mazie Hirono (D-HI) expressed a strong interest in Berhe’s work with the National Science Foundation-supported ADVANCEGeo Partnership, which aims to address sexual harassment and other abusive behaviors affecting workplace climate in the geosciences. Berhe replied, “We have legal mechanisms to address [harassment incidents] after the fact, but I personally believe that’s a little too late a time to address them. We could actually use a community-building approach, where we’re empowering scientists to work together to establish a culture where everyone that enters our academic institutions deserves to just be able to focus on their work in peace without any kind of exclusionary behavior.”

Other committee members focused their questions on matters such as carbon dioxide capture and sequestration. For her part, Berhe said she is interested in pursuing both natural and technological approaches to carbon mitigation, and that she aims to support both basic research and technology transition to address climate change. She also identified other opportunities for the office to expand its Biological and Environmental Research program, including in areas such as greenhouse gas emissions reduction, genomics, and synthetic biology.

After Berhe answered his questions on carbon sequestration, Sen. John Hickenlooper (D-CO), a former geologist, concluded, “It is an exciting time. I think you're going to be the right person in the right place.”