DOE officials recently reported that U.S. contributions to upgrades at CERN’s Large Hadron Collider may face a shortfall this year and that the department is pursuing a "conservative" approach to funding the flagship LBNF/DUNE project, which has experienced major cost increases. 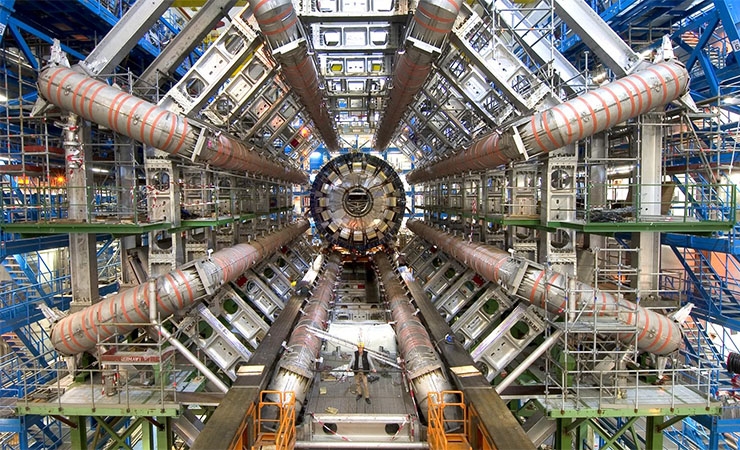 The ATLAS detector at CERN’s Large Hadron Collider. The U.S. is supporting an upcoming upgrade to the detector, along with upgrades to LHC’s CMS detector and accelerator system that will enable a dramatic increase in particle collisions and data output.

From a topline budget standpoint, DOE’s HEP program has fared well the last five years, with Congress increasing funding by about $250 million, or more than 30%. Program head Jim Siegrist framed that support as a positive reaction to the long-range “P5” strategy report HEPAP completed in 2014, and noted the budget growth has significantly exceeded the levels the report anticipated. Yet, as an external review flagged last year, much of the money has gone to large and medium-scale projects the report recommended, leaving less funding for core research as well as particle accelerator and detector R&D.

The DOE officials at the latest meeting expressed their desire to address that portfolio imbalance, but they also reported on budget pressures some large-scale projects are facing in both the near and long term. Separately, the officials provided updates on activities leading up to the next P5 report and broached a potential opportunity for HEPAP to conduct a quick-turnaround study of the U.S.’ global status in particle physics.

Near the start of the meeting, Siegrist acknowledged there has been “some upset” in the research community over budget proposals for major HEP projects in the current fiscal year. The most immediate funding crunch concerns DOE’s contributions to major upgrade projects at the Large Hadron Collider (LHC) at CERN, Europe’s world-leading particle physics lab.

DOE official Mike Procario elaborated that the Biden administration requested a total of $40 million for the projects this year: a cut from the previous appropriation of $73 million and well short of the estimated requirement of about $90 million.

Recounting events leading up to the request, he said, “It was clear [the projects] needed this money in order to continue to make the progress they needed. This change was made very late in the budget process — I mean, days before the thing got released — and was justified by counting on the reconciliation bill to fully fund the projects. Any objection to making this change was answered with, ‘Oh, there’s plenty of money in the reconciliation bill.’”

In September, the House Science Committee did in fact propose to include about $224 million for the LHC upgrades in what is now called the Build Back Better Act, a partisan, multiyear spending bill Democrats are aiming to pass using Congress’ budget reconciliation process. However, House Democrats removed most funding for DOE science programs, including the LHC money, in a later draft to accommodate a reduction in the bill’s total spending from $3.5 trillion to less than $2 trillion.

One of two Democratic senators demanding a topline reduction was Sen. Joe Manchin (D-WV), who chairs the Senate committee that oversees DOE science programs. It is possible Democrats could restore the funding as negotiations continue, but Manchin has not publicly stated whether he prioritizes including funding for DOE science projects in the bill.

The outcome of the regular appropriations process for the current fiscal year is also still pending. The Senate’s proposal matches the request for the upgrades, while the House’s does not specify an amount, but those proposals do not necessarily predict the final outcome.

Procario said DOE has maintained contact with CERN about the situation and reported the department is contemplating shifting $25 million to the projects as a stopgap to “prevent the worst impacts,” noting that plan still requires congressional approval.

If funding for the upgrades does not meet requirements, Procario said it will be necessary to make up the shortfall in fiscal year 2023. He also noted that doing so could delay the ramp up of funding for the HEP program’s flagship project, the Long-Baseline Neutrino Facility and Deep Underground Neutrino Experiment (LBNF/DUNE).

LBNF/DUNE’s total anticipated cost to DOE has been in flux over the last two years, rising from less than $2 billion to more than $3 billion. Some pressure stemming from shortfalls in international contributions has since been alleviated with CERN’s announcement in August it will contribute a second cryostat, a critical component for the project’s low-temperature neutrino detectors. Procario said international contributions for LBNF/DUNE now total about $570 million.

Increases in other areas, though, have driven the total project cost above a threshold requiring DOE to reassess the project’s basic design. Procario said DOE plans to formally reaffirm its commitment to the current design after a review this spring, when a new estimate for the project’s cost range will be established.

Fermilab official Chris Mossey, who directs the U.S. portion of LBNF/DUNE, reported that, instead of establishing a firm baseline cost for the entire project, the plan is now to baseline components as they become mature enough. He said facilities at the project’s “far” site in South Dakota, and the first detector there, are considered completely or nearly mature and will start to be baselined in January. By contrast, a detector to be installed at the project’s “near” site at Fermilab is deemed 30% mature and will be baselined sometime between 2023 and 2025.

Looking farther ahead, Mossey reported the project is aiming to complete the installation of two detectors at the far site by 2029, but that the conservative funding profile will delay completion of work on the near site’s neutrino beam and detector until 2031 and 2032, respectively. He said that strategy will allow research to begin as soon as possible on neutrinos from sources such as supernovas and hypothetical proton decays. He also noted work using the project’s centerpiece neutrino beam could be brought forward if additional funding is allocated early enough.

The House Science Committee’s proposal for the Build Back Better Act included $1.3 billion for LBNF/DUNE, but, as with the LHC upgrades, those funds have since been removed.

Consistent with the longstanding plans for LBNF/DUNE, once the project is operating with a beamline, a near-site detector, and two far-site detectors, attention will turn to potentially installing two more far-site detectors. That expansion would increase capabilities in line with recommendations in the 2014 P5 report, though the decision to proceed with it will be a matter for consideration during the next P5 process.

HEPAP poised to take global look at US particle physics

Preparations for the next P5 process are currently underway. The American Physical Society’s “Snowmass” planning exercise, which presents community views on science priorities in particle physics, will hold its summer study meeting in July, following a yearlong postponement due to the pandemic.

In addition, DOE and the National Science Foundation are currently developing a charge for a National Academies decadal survey for elementary particle physics, updating a similar report released in 2006.

According to Siegrist, the P5 process itself is targeted to begin in late 2022 and to produce a report by May 2023, in time to inform fiscal year 2024 appropriations and the fiscal year 2025 budget request.

Siegrist also sought reaction from HEPAP to the idea that it could conduct an international “benchmarking” study similar to one recently conducted for DOE’s Basic Energy Sciences (BES) program. That study concluded the U.S. is losing the leadership position it once clearly held in facilities and research that the BES program supports. Noting that HEP is a more globalized enterprise, Siegrist remarked, “I think the key issue for the U.S. is: how do we be the peer of choice that our international partners want to collaborate with?”

As an example of that dynamic, he pointed to U.S. work on niobium-3-tin superconducting magnets that will enable the planned upgrades at LHC. “Not only CERN but all of Europe embraced the U.S. continuing working at the LHC because we brought special sauce to the table,” he said.

Siegrist also noted that the BES study identified gaps in U.S. support for scientists’ career development and observed there are anecdotal cases in HEP of the U.S. losing senior scientists to European recruitment efforts.

He more generally argued there has not been a major study of the U.S. position in particle physics since the “tidal shift” in the 1990s, when the field’s center of gravity shifted to Europe. “That’s a long time ago. … And now we’re trying to house thousands of people on DUNE from around the world, and it might be a good time to look at this to see what we should try to change,” he said.

Gauging panel members’ reaction to Siegrist’s idea, HEPAP Chair JoAnne Hewett concluded there was support for conducting a benchmarking study. “I think we’ve signed up for some more work, but I think we also have the chance to do some good. That is after all what we all signed up for,” she remarked.