Congress has increased the National Science Foundation budget 2.5% to just under $8.5 billion for fiscal year 2021 and accommodated the agency’s proposals to significantly expand funding for work in quantum information science and artificial intelligence.

With Congress' appropriations package for fiscal year 2021 now signed into law, the National Science Foundation’s budget is increasing 2.5% to nearly $8.5 billion. The additional funds are distributed among its research and education directorates, while support for major facility construction is remaining essentially flat as work continues on projects already in progress.

An explanatory statement accompanying the bill provides additional funding and policy direction, and language from the House Appropriations Committee report conveys additional direction unless specifically negated in the final statement. The Senate Appropriations Committee did not formally submit its report, but language from a publicly released draft is incorporated in the explanatory statement. For summary tables, consult the FYI Federal Science Budget Tracker. 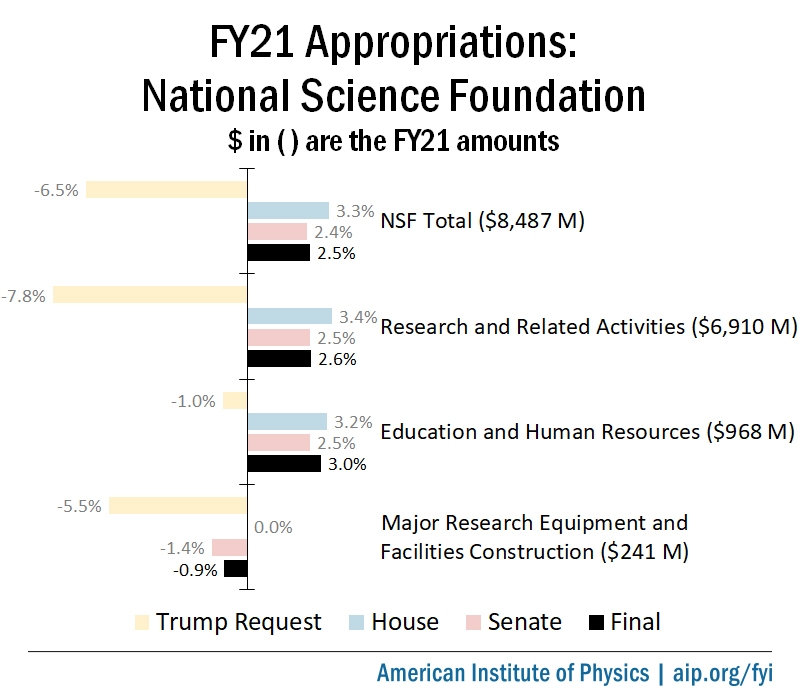 NSF’s Research and Related Activities account, which funds six disciplinary research directorates, is increasing 3% to $6.91 billion. Per custom, Congress does not specify how NSF should distribute funding across these directorates, but it does provide instruction on certain points.

The House report also directs NSF to provide at least level funding for the Social, Behavioral, and Economic Sciences Directorate, explaining, “SBE funds over half of our nation's university-based social and behavioral science research but remains one of the smallest NSF directorates. The committee believes this research provides an evidence-based understanding of the human condition, resulting in more-informed policymaking and better-informed spending on a full range of national issues.”

Quantum research. Congress directs NSF to spend up to $226 million on quantum information science, matching the requested level, which is a 113% increase over the fiscal year 2019 level. Of this amount, NSF is directed to allocate $50 million for research centers it establishes pursuant to the National Quantum Initiative Act. The 2018 law directed NSF to create between two and five centers, each at up to $10 million annually, and to date the agency has established three Quantum Leap Challenge Institutes.

Artificial intelligence. Congress directs NSF to spend up to $868 million on AI-related grants and initiatives, matching the requested level, which is an 87% increase over the fiscal year 2019 amount. It also encourages NSF to fund research on algorithmic bias and to conduct focused outreach to community colleges and Minority-Serving Institutions in its workforce development efforts.

EPSCoR. NSF is directed to allocate at least $200 million to its Established Program to Support Competitive Research, a 5% increase, supporting projects in states that receive a low proportion of federal research funds.

Laser research. Congress encourages NSF to implement recommendations from a 2017 National Academies report that urges the U.S. to bolster its support for ultrafast, high-intensity laser research. It states the report “found that the United States has lost its previous dominance in high-intensity lasers, which are critical to advance scientific discovery, future science facilities, and important applications in national security, industry, and medicine.” 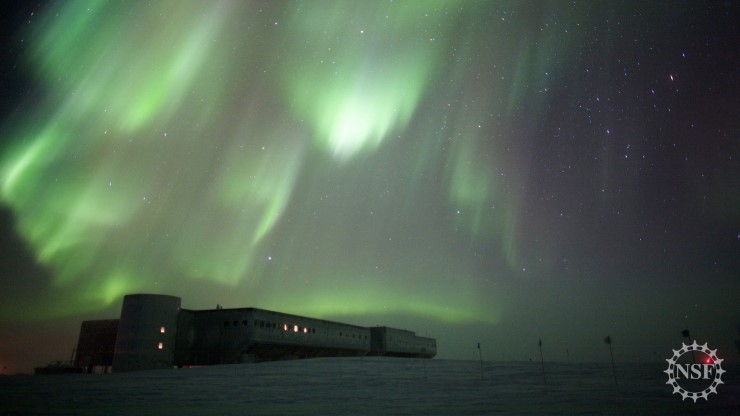 An image from NSF’s collection of Zoom backgrounds showing an aurora australis over the agency’s research base at the South Pole. NSF also operates two coastal bases in Antarctica: McMurdo and Palmer Station.

Major facilities. Funding for NSF’s Major Research Equipment and Facility Construction (MREFC) account will stay essentially level at $241 million, with Congress providing the requested amounts for construction of the Vera C. Rubin Observatory and the in-progress upgrades to the Large Hadron Collider at CERN and the McMurdo base in Antarctica.

Mid-scale infrastructure. Within the MREFC account, Congress provides NSF’s mid-scale research infrastructure-2 program with $76 million, an $11 million increase, and encourages the agency to make at least one award to a project led by an institution in an EPSCoR state. The program supports projects in the $20 million to $100 million range and draws on appropriations from multiple years to fund awards. Congress did not specify an amount for the companion mid-scale infrastructure-1 program, which funds projects in the $6 million to $20 million range.

Arecibo Observatory. Concerning the recent collapse of the Arecibo telescope in Puerto Rico, the explanatory statement observes, “During its 57 years in operation, the telescope was an integral part of U.S. capabilities to advance scientific research and served as an iconic, beloved site for the residents of Puerto Rico and the scientific community.” It then directs NSF to report within 60 days on “the causes and extent of the damage, the plan to remove debris in a safe and environmentally sound way, the preservation of the associated AO facilities and surrounding areas, and the process for determining whether to establish comparable technology at the site, along with any associated cost estimates.”

Infrastructure planning. In lieu of House language that expressed concern about NSF’s planning for the next generation of large facilities, “including ground-based telescopes,” Congress encourages NSF to “engage in robust planning for and investments in the next generation of world class facilities, including any projects recommended by the upcoming Astrophysics decadal survey.” The explanatory statement also overrides House language that encourages NSF to develop a “prioritized list of large-scale facilities requested by NSF-supported science disciplines.” It instead notes that the NSF director is required by law to rank the relative priority of MREFC projects that the agency’s governing board has approved for inclusion in NSF’s budget request.

NSF funds research capacity-building efforts at minority-serving institutions, STEM education pedagogy research, and various fellowship programs through its Education and Human Resources account, which is increasing 3% to $968 million. The majority of the increase is directed toward programs that support groups underrepresented in STEM fields.

Minority-Serving Institutions. Congress allocates $47 million for the Hispanic-Serving Institutions program, a $2 million increase. The House report expresses particular concern about the “severe underrepresentation of Hispanic Ph.D. graduates in the STEM fields” and directs NSF to develop a plan to address the matter. It also notes that NSF does not have a dedicated program for Asian American and Native American Pacific Islander-Serving Institutions and “urges” the agency to increase grant funding opportunities for these groups.

Congress further specifies that NSF provide no less than a $2 million increase each for its HBCU Undergraduate program, Tribal Colleges and Universities program, and the Louis Stokes Alliances for Minority Participation.

Scholarships and fellowships. Congress specifically rejects proposed cuts to the Robert Noyce Teacher Scholarships program, the Improving Undergraduate STEM Education program, and the Graduate Research Fellowship Program, instead directing they be funded at the current level.

NSF workforce diversity. Congress directs NSF to produce a report that assesses “the current racial and cultural makeup of the foundation; planned efforts to recruit, retain, and advance applicants and employees critical to promoting greater racial and cultural diversity, and the outcomes of these efforts.”