The National Science Foundation’s budget request for fiscal year 2022 fleshes out the Biden administration’s vision for adding a technology directorate to the agency and provides details on how the pandemic has disrupted facility construction projects.

In its fiscal year 2022 budget request to Congress, the Biden administration is seeking to increase the National Science Foundation’s discretionary budget by 20% to $10.2 billion.

Marquee items in the request include expanding STEM workforce diversity programs and establishing a technology directorate that would expand NSF’s portfolio of “use-inspired” research. The request also includes steady funding for major facilities under construction as NSF works to pin down cost increases and schedule delays caused by the COVID-19 pandemic.

On top of the discretionary budget request, the Biden administration has separately proposed that Congress provide the new directorate with $50 billion over 10 years as part of an infrastructure initiative. However, the administration recently stated it would be willing to push for that funding through other legislation in order to lower the infrastructure package’s price tag.

Detailed figures from the discretionary request are available in FYI’s Federal Science Budget Tracker and highlights are summarized below. 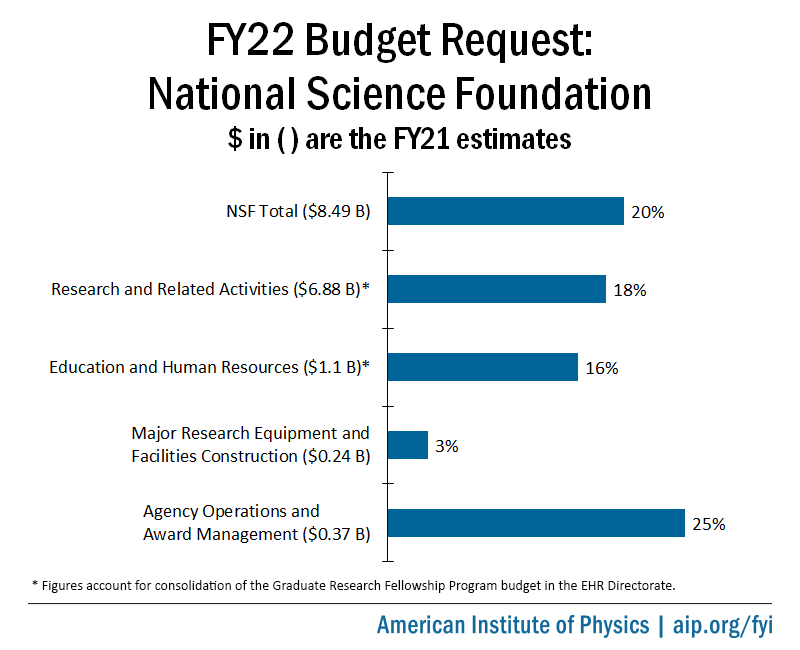 NSF states the proposed “Directorate for Technology, Innovation, and Partnerships” would work to “advance science and engineering research and innovation leading to breakthrough technologies as well as solutions to national and societal challenges.” It would also aim to “accelerate the translation of fundamental discoveries from lab to market,” in part by funding “prototyping, technology demonstration, and scale-up work, including licensing of NSF-funded research outputs.”

The vision for the directorate roughly corresponds to that in two competing legislative proposals, namely the Endless Frontier Act’s focus on technology commercialization and the House Science Committee’s emphasis on addressing societal challenges, as embodied in its NSF for the Future Act. Consistent with both bills, NSF indicates a portion of the directorate’s budget would go toward co-funding projects with existing agency directorates.

NSF requests $865 million to launch the new directorate, $500 million of which would be new funding and the remainder would come from programs currently housed in other parts of NSF, primarily the Engineering Directorate.

Existing activities that would be subsumed into the new directorate include the SBIR/STTR programs, which fund small business R&D, and the Partnerships for Innovation program, which funds “proof-of-concept” technology prototyping, among other translational R&D activities. The directorate would also oversee the Innovation Corps entrepreneurial education program and the Convergence Accelerator program, which funds cross-sector teams to rapidly advance “solutions-oriented” research.

New activities proposed for the directorate include establishing up to 20 “Regional Innovation Accelerators,” each funded at $10 million per year over 10 years. The accelerators would concentrate on “incentivizing partnerships between NSF, academia, industry, nonprofits, state and local governments, and venture capital; and serving as hubs for NSF’s broader portfolios in their respective areas of focus.”

NSF also proposes to create an Entrepreneurial Fellowship program that would “embed PhD-trained scientists and engineers in leading research environments” to help them develop experience in maturing ideas into marketable products.

NSF’s six existing research directorates would also receive funding increases under the request, ranging from 7% for the Mathematical and Physical Sciences Directorate to around 20% for the Geosciences and Engineering Directorates. 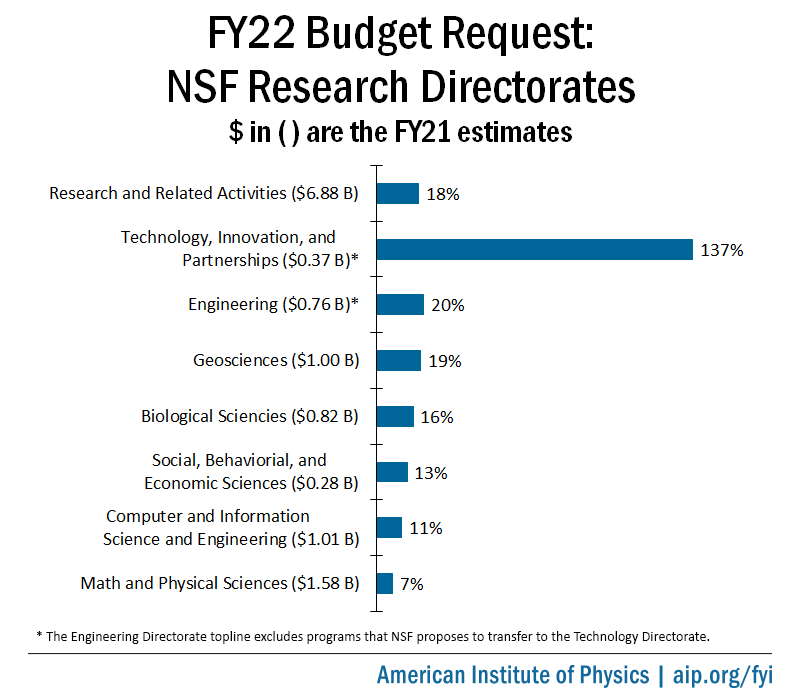 Climate research. NSF’s contribution to the interagency U.S. Global Change Research Program would increase by nearly 50% to $762 million under the request. Research priorities include “intra-seasonal to centennial predictability, predictions, and projections; water cycle research; impacts of climate change on the nation’s critical ecosystems, including coastal, freshwater, agricultural and forests systems; understanding the impacts of global change on the Arctic region and effects on global climate; and fundamental research on actionable science.”

AI and QIS. Artificial intelligence funding would increase by 20% to $734 million, with the National AI Research Institutes program budget increasing 36% to $69 million. The funds would support up to 16 institutes, including the five launched in 2020, with up to seven due to be awarded this fiscal year and up to four more the following year. Each will receive $4 million per year over five years. QIS funding would increase by 24% to $260 million, with steady funding of $50 million allocated to the multidisciplinary centers for quantum research and education created pursuant to the National Quantum Initiative Act.

Advanced wireless. The budget for developing advanced wireless communications systems would increase by about a third to $166 million. NSF notes a portion of the funds would support its new Resilient and Intelligent NextG Systems (RINGS) program, which it has described as its “single largest effort to date to engage public and private partners to jointly support a research program.”

Big Ideas. NSF requests $347 million to continue the 10 Big Ideas initiative it launched in 2016, $62 million above the current level though less than the $432 million requested last year. The additional funds would go to the INCLUDES workforce diversity program, mid-scale research infrastructure, and an initiative to expand convergence research. 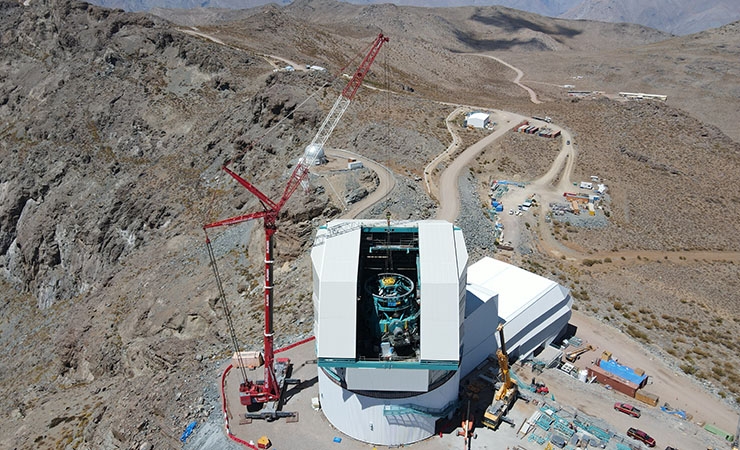 A major component of the Rubin Observatory’s Telescope Mount Assembly was installed in March 2021.

NSF indicates it will have to establish a new baseline cost for several of its facility construction projects due to disruptions caused by the pandemic. The agency notes its “no cost overrun policy” does not apply in this case as the pandemic “constitutes an unforeseen event that was not within the control of the recipients managing the ongoing major facility construction projects.” NSF states the pandemic has largely not increased costs for currently operating facilities, with the primary impact to date being “loss of science” due to curtailed operations.

Rubin Observatory. NSF requests level funding of $41 million to continue construction of the Vera C. Rubin Observatory in Chile, which is $35 million more than it originally expected to spend for fiscal year 2022. NSF plans to finalize a new total cost for the project by the end of this year. At present, it estimates the project has been delayed by 16 months and that the pandemic has resulted in an overall cost increase of about $60 million. Among the pandemic’s specific impacts, the observatory dome was unable to be completed before the onset of winter last year, though NSF reports the dome is now “substantially closed” and that no significant damage resulted from exposure to weather.

Antarctica infrastructure upgrade. NSF requests level funding of $90 million for infrastructure upgrades underway in Antarctica but notes it is planning to substantially rescope the project. NSF halted construction at its McMurdo base last year in its efforts to keep the coronavirus from reaching the continent. Now, NSF states it wishes to broaden the project to address “emerging priorities” across all its bases in Antarctica, stating they “cannot be deferred” until after the McMurdo upgrades. NSF does not estimate a cost for the expanded project.

Large Hadron Collider upgrades. NSF and the Department of Energy are co-funding upgrades to the ATLAS and CMS particle detectors at the Large Hadron Collider in Europe. NSF reports that both projects are “well behind schedule” due to the pandemic, with work on custom sensors and circuits set back by nearly one year, which has delayed the start of some construction activities. It notes the closure of radiation facilities impeded work on radiation hardness testing required for certain detector components and that a global shortage of semiconductor chips may exacerbate the delays. NSF does not request funds beyond the $36 million proposed in the initial baseline plan, noting it is still working to quantify the additional funds that will be needed due to the pandemic.

Geographic diversity. NSF requests a 20%, $40 million increase for the EPSCoR program, which supports research capacity-building efforts in states that have historically received a smaller share of agency funds. NSF is also currently soliciting nominees for a Committee on the Future of EPSCoR that will recommend improvements to the program’s investment and evaluation strategies.

Fellowships. NSF proposes to increase the annual number of new awards made through its Graduate Research Fellowship program from 2,000 to 2,500. The agency also states it will continue to “align awards with NSF and administration research priorities, including AI, QIS, and other emerging industries.” The inclusion of discipline-specific emphasis areas for the program has previously faced pushback, but NSF has insisted the move will not change the way it reviews applications.

NSF requests a 25%, $93 million boost for the account that funds agency staff and operations. It describes the increase as a “course correction” that would reduce reliance on transferring funds from other accounts to cover operating costs.

NSF also states the additional funds would address a variety of new staff and infrastructure needs, including operations of the proposed technology directorate, transition to a hybrid work environment in the wake of the pandemic, and creation of a sensitive compartmentalized information facility (SCIF) at its headquarters.

Of the increase, $5 million will support activities of NSF’s new Office of Research Security Strategy and Policy, such as creation of training materials for grantees. NSF also separately requests a $2.6 million increase for its Office of Inspector General, part of which would support hiring five new staff members who would focus on addressing “challenges posed by members of foreign talent plans who receive NSF funding.”

Correction: The charts in this article have been updated to account for the proposed consolidation of funds for the Graduate Research Fellowship Program in the Education and Human Resources Directorate.