NOAA Nominee Rick Spinrad Has Deep Roots at the Agency

President Biden announced last week that he is nominating oceanographer Rick Spinrad to lead the National Oceanic and Atmospheric Administration. Spinrad previously served as head of the agency’s research office and as its chief scientist. 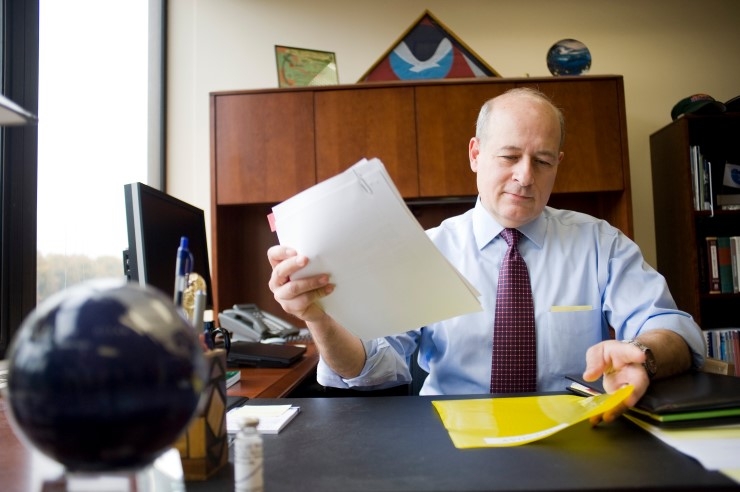 On April 22, President Biden announced his nomination of oceanographer Rick Spinrad to lead the National Oceanic and Atmospheric Administration. Spinrad was previously head of NOAA’s research office from 2005 to 2010 and its chief scientist from 2014 through 2016. Between those positions, he was vice president for research at Oregon State University, where he is currently a faculty member and senior advisor.

NOAA has not had a Senate-confirmed leader in more than four years, as neither of President Trump’s two nominees for the role ever received floor votes. Pending his confirmation, Spinrad will take the agency’s helm as it seeks to reinvigorate its role in monitoring and researching changes in the climate. The Biden administration is proposing to increase NOAA’s budget by more than 25% to $6.9 billion in fiscal year 2022, largely to support such efforts.

To stay up to date on nominations to key science positions across the government, consult FYI’s Federal Science Leadership Tracker.

In picking Spinrad, Biden has chosen a nominee with extensive ocean research and administrative experience, both inside and outside of government.

Spinrad studied Earth and planetary sciences at Johns Hopkins University, receiving his bachelor’s degree in 1975, and went on to earn his doctorate in oceanography from Oregon State University in 1982. Afterward, he conducted research on underwater optics and radiative transfer at the Bigelow Laboratory for Ocean Sciences in Maine, before becoming president of the company Sea Tech from 1985 to 1987.

Spinrad then joined the Office of Naval Research, where he remained through 1994, serving as director of its Ocean Biology/Optics/Chemistry Division and later its Ocean, Atmosphere, and Space Modeling and Prediction Division. From 1994 to 1999, he was executive director of the Consortium for Oceanographic Research and Education, a nonprofit organization that was later integrated into the Consortium for Ocean Leadership. He next served as the civilian technical director for the oceanographer of the Navy until 2003, advising on matters such as oceanographic and meteorological research and the application of oceanographic products to naval operations.

In 2003, Spinrad joined NOAA as director of its National Ocean Service before taking over as head of the agency’s Office of Oceanic and Atmospheric Research two years later. In that role, he oversaw NOAA’s seven research laboratories and its climate research and oceanographic exploration efforts. He also co-chaired the White House committee that developed the nation’s first decadal ocean research strategy and worked to advance the agency’s proposal to establish a National Climate Service.

Spinrad told the journal Science in 2009 that a climate service would offer a greater diversity of products and services than NOAA’s National Weather Service, warranting a budget at least as large. Although that proposal was ultimately dropped, Congress is currently beginning to revisit the idea.

After leaving NOAA for Oregon State University in 2010, Spinrad returned in 2014 when the Obama administration tapped him to serve as chief scientist, overseeing science and technology matters across the entire agency. During this time, he led the development of policies for R&D and transitioning R&D into applications, and issued the agency’s first chief scientists’ annual report shortly before his departure at the end of 2016.

Scientific integrity and ‘blue economy’ will be focal points

After Spinrad stepped down as chief scientist, the role was filled in an acting capacity for most of the Trump administration by career staff member Craig McLean, who rose to public attention in 2019 for fiercely criticizing the actions of NOAA’s leaders during the scientific integrity scandal surrounding Hurricane Dorian.

Spinrad himself criticized what he called the Trump administration’s “strong anti-science attitude” in an April 2017 interview that he gave to the American Geophysical Union magazine Eos. Shortly thereafter, he was the featured speaker at a March for Science satellite event in Oregon, and by 2018 he was speaking vehemently against the Trump administration’s stewardship of NOAA. In 2019, he joined two other former NOAA officials in filing an official scientific integrity complaint over the Hurricane Dorian incident.

If confirmed as NOAA’s head, Spinrad will oversee its response to President Biden’s memorandum directing agencies to review past failures of their scientific integrity policies and to recommend improvements. In doing so, he will revisit work he undertook early in the Obama administration when he was an integral player in developing NOAA's integrity policy.

Spinrad will also have the opportunity to expand on his ideas for building a “new blue economy.” Discussing the subject in 2016, he explained, “The new blue economy is a knowledge-based economy, looking to the sea not for extraction of material goods but for data and information to address societal challenges and inspire their solutions.”

Highlighting examples of what might be accomplished, he asked, “What difference would better seasonal sea ice predictions make to Arctic navigation? And open ocean predictions of swirling eddies to cruise lines? How about forecasts of low-pH water intrusions to shellfish hatcheries? Or real-time observations of deep ocean health to support oil spill recovery?”

Since leaving NOAA, Spinrad has also focused on marine energy as part of the blue economy in connection with Oregon State’s work on the Department of Energy-funded PacWave wave-energy test facility. Speaking on the subject in 2019, he remarked that ocean-based energy is “really exploding because the technology for putting things in the water is so much better than it used to be, our understanding of the marine environment, where you would put these kinds of energy devices and how you would extract energy, and then what to do with that, how to integrate that with the grid, for example.”

Whereas upcoming work on scientific integrity will seek to shore up weaknesses exposed by the Trump administration, efforts surrounding the blue economy will build on ongoing activities, including a strategic plan published on Jan. 19. In addition, NOAA will continue to face other issues carried over from the Trump administration, such as setting up the Earth Prediction Innovation Center, a “virtual center” for weather model development; grappling with strains on its weather data access infrastructure; and developing new generations of environmental monitoring satellites.

Spinrad’s nomination was welcomed by Tim Gallaudet, who rose to be oceanographer of the Navy before serving as deputy NOAA administrator in the Trump administration. Gallaudet wrote in a tweet, “There is no one better qualified to lead NOAA than my friend and former Navy Shipmate Dr. Rick Spinrad. The NOAA Blue Economy Initiative that I led was his idea. Formerly the NOAA Chief Scientist, he is the total package!”