The Endless Frontier Act is headed to the Senate floor next week despite an unresolved feud over the roles the National Science Foundation and Department of Energy should play in the flagship R&D initiative the legislation proposes. 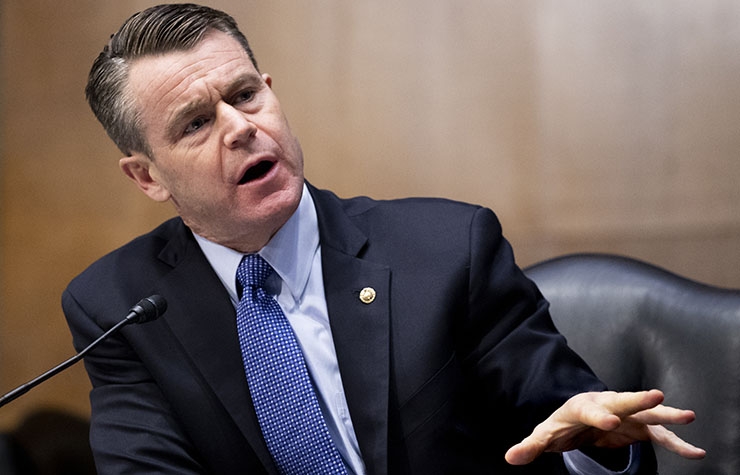 Sen. Todd Young (R-IN), the lead Republican sponsor of the Endless Frontier Act in the Senate.

At a meeting on Wednesday, the Senate Commerce, Science, and Transportation Committee approved the Endless Frontier Act on a vote of 24 to 4, despite clashing over how to structure the national R&D initiative it proposes. The version that emerged would still add a technology-focused directorate to the National Science Foundation, but the committee substantially reduced the directorate’s target budget, including by shifting a large fraction to the Department of Energy.

Committee Ranking Member Roger Wicker (R-MS) voted to advance the bill but lamented the rushed process it has gone through, saying it is “not ready for prime time.” Meanwhile, the bill’s lead Republican sponsor, Sen. Todd Young (R-IN), denounced the new DOE provisions as a “poison pill” but still voted in favor of the bill, declaring he would seek to restore funding for the NSF directorate on the Senate floor. Senate Majority Leader Chuck Schumer (D-NY), the bill’s lead sponsor, intends to open floor debate on it next week and hold a final vote before the end of the month.

Whatever changes result from the floor process, they will still be far from the final word as the bill must be reconciled with competing bipartisan legislation in the House, namely its NSF for the Future Act. Research security measures in the Endless Frontier Act are also expected to be expanded on the floor through the addition of the Safeguarding American Innovation Act and the Strategic Competition Act, which could further complicate the passage of any final bill given that many of the measures are controversial.

Wicker and Committee Chair Maria Cantwell (D-WA) began this week’s meeting by introducing a substitute version of the Endless Frontier Act that cuts the bill’s five-year funding recommendation for the proposed NSF directorate from $100 billion to about $45 billion. The substitute also recommends Congress increase the annual budget for the rest of the agency from its current level of $8.5 billion to $11.1 billion over the same period, whereas the original bill did not set targets for NSF as a whole.

Wicker said the substitute “preserves the core basic research mission” of NSF and adds measures to prevent duplicative efforts across agencies. He also highlighted provisions requiring more funds to be set aside for EPSCoR states, calling the bill a “game-changer for geographic diversity.” In addition, he said the substitute incorporates “bold measures” to improve research security, including a cross-agency ban on grantees participating in talent recruitment programs supported by the Chinese government.

The substitute bill was accepted without objection, but a subsequent amendment from Sen. Ben Ray Luján (D-NM) that carved out a large role for DOE provoked a heated debate. The amendment cuts a further $16 billion out of the new directorate’s total target budget and instead recommends DOE receive $17 billion over five years to fund work in the same “key technology areas” the directorate would focus on.

The day before, Luján and 19 other senators from both parties had written to Schumer arguing that DOE deserves a leading role in the Endless Frontier Act and complaining the bill as introduced could “undermine” the national lab system by assigning duplicative responsibilities to NSF. They also argued DOE is more prepared than NSF to “prevent the theft of defense and other commercial technologies and know-how by competitors, including China.” Fifteen of the senators represent states that host one or more national labs. 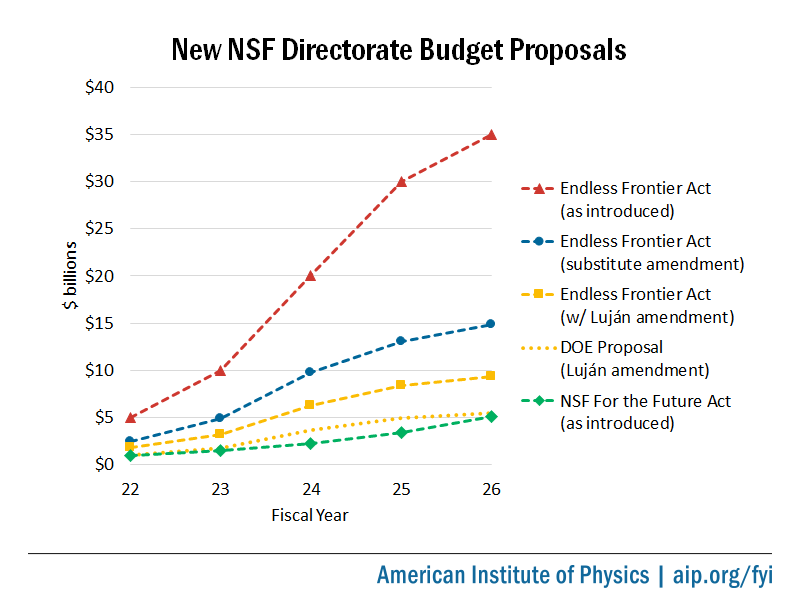 Angrily reacting to the amendment, Young suggested it was motivated by “parochial” interests of senators seeking to steer money to labs in their states. He also blasted the amendment for not offering specifics on how the money would be used. “I don't have the damnedest idea where that money is going and for what purposes,” he exclaimed.

Saying the amendment would “gut” the proposed NSF directorate, Young predicted it would cause the Endless Frontier Act to lose the backing of some of its original sponsors. He also defended the concept of concentrating funding in NSF, saying it was informed by extensive consultation “with technologists, with corporate leaders, with national security experts, with heads of various departments,” among others.

Young further argued the original $100 billion price tag was modest given that the National Security Commission on Artificial Intelligence recommended the government rapidly ramp up non-defense spending on AI R&D to $32 billion annually to remain competitive with China.

Sen. Marsha Blackburn (R-TN) defended Luján’s amendment by noting that DOE has leading capabilities in the bill’s priority technology areas, such as advanced computing, highlighting how the fastest computer in the world currently is located at Oak Ridge National Lab in her state.

Trying to defuse the dispute, Cantwell observed there had been a similar tension during the development of the America COMPETES Act of 2010, another marquee innovation policy bill. “You cannot have a debate about research and development in the United States Congress with NSF without having a debate about the DOE lab structure, you just cannot,” she said.

The amendment was adopted on a vote of 23 to 5, with Sens. Tammy Baldwin (D-WI), Jacky Rosen (D-NV), Richard Blumenthal (D-CT), and Ted Cruz (R-TX) joining Young to vote no. However, none of them were among the group who voted against advancing the bill out of committee: Sens. Ron Johnson (R-WI), Mike Lee (R-UT), Cynthia Lummis (R-WY), and Rick Scott (R-FL).

Although the Endless Frontier Act proposes what would amount to a landmark initiative in the history of U.S. R&D policy, as the bill is currently formulated Congress would have to recommit every year to meeting its rising funding targets.

During the committee meeting, the Senate’s lead Republican appropriator for NSF, Sen. Jerry Moran (R-KS), sought to tamp down expectations on how much money might ultimately be available. “I just want to highlight how challenging it will be to meet anyplace close to the authorized levels in this bill,” he said, noting appropriators have only been able to secure modest increases for NSF in recent years despite their favor for the agency.

Although appropriators are no longer constrained by statutory budget caps, they will still have to work within allocations set by future agreements on overall federal spending levels for each of the coming fiscal years.

Alternatively, Congress could fund the bill through a special appropriation, such as the infrastructure spending package currently under development. Democrats could in principle pass the package without Republican support using a maneuver known as budget reconciliation, but Wicker warned against using such a one-sided approach, saying it would undermine the “long-term sustainability” of the Endless Frontier Act’s initiatives.

Although the bill does not include funding for the initiatives it establishes, during the floor debate a bipartisan group of senators is seeking to attach about $50 billion in “emergency appropriations” for semiconductor production and R&D initiatives already authorized through the CHIPS for America Act.

Other science bills hitch a ride

Cantwell also successfully attached a major NASA policy update that includes a provision proposing Congress provide NASA with $10 billion over six years to develop two human landing systems for the agency’s lunar exploration program. In view of current budget constraints for the program, NASA recently chose to only fund a single lander, leaving two other contenders at the wayside, including a team led by Blue Origin, which is headquartered in Cantwell’s state.

Cantwell’s amendment also would broadly update policy for NASA's Science Mission Directorate and enshrine in statute a policy that restricts NASA from cooperating with entities in China. Currently the restriction, called the “Wolf amendment,” is reimplemented on an annual basis through appropriations legislation.

Separately, Sen. Ted Cruz (R-TX) successfully attached a provision he said he modeled on the Wolf amendment that would likewise restrict the U.S. government from cooperating with China on “nuclear activities,” with exceptions permitted for counterterrorism, nonproliferation, nuclear emergencies, and areas deemed in the national interest.