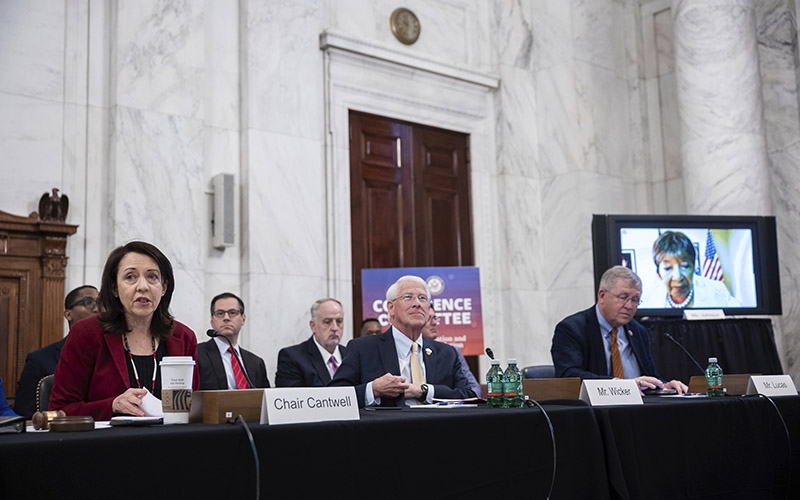 The Senate released a thousand-page legislative package this week that represents a major compromise with the House on how to revamp the U.S. research system in response to growing competition with China and other countries. The bill blends core science provisions of the House’s America COMPETES Act of 2022 with the Senate’s U.S. Innovation and Competition Act (USICA), which have been under negotiation by a bicameral conference committee since May.

After those talks stalled early this month, the Senate considered advancing a narrower bill focused on subsidizing the semiconductor industry, facing warnings from chipmaking companies that if Congress did not act soon they might instead invest in countries with already-established subsidy programs. However, a group of senators successfully advocated to attach science provisions that the conference committee reached agreement on earlier this summer.

The combined bill, colloquially called “CHIPS+,” appropriates $52 billion for semiconductor R&D and manufacturing and lays out ambitious expansion plans for the National Science Foundation, Department of Energy, and National Institute of Standards and Technology. It also creates a semiconductor investment tax credit that is estimated to cost about $22 billion over five years.

The Senate plans to vote on the bill next week, and the House intends to follow suit before it departs for the traditional congressional recess in August. However, some lawmakers are seeking last-minute additions that could complicate final passage of the bill, such as extra research security measures.

The bill finds middle-ground on many competing proposals from the House and Senate, such as their debate over the appropriate mission and size of NSF’s new Directorate for Technology, Innovation, and Partnerships (TIP).

The Senate favored creating a huge directorate focused on ten key technology areas, whereas the House advocated for a significantly smaller directorate focused on both technology-oriented research and a variety of “societal challenges” such as climate change. The compromise bill merges these frameworks, requiring the TIP directorate to focus on not more than five “societal, national, and geostrategic challenges” and not more than 10 “key technology focus areas,” with each list subject to periodic revision.

The bill recommends Congress ramp up the directorate’s annual budget to about $4 billion over five years, close to the House’s original proposal, amounting to an extra $16 billion for NSF. By contrast, the initial concept for the directorate floated by Senate Majority Leader Chuck Schumer (D-NY) and Sen. Todd Young (R-IN) envisioned spending $100 billion over five years, though the Senate later downsized that proposal to $29 billion.

Schumer and Young also proposed creating a “regional technology hub” program at the Commerce Department to spur cross-sector partnerships across the U.S., with a recommended budget of $10 billion over five years. The compromise bill retains that provision and further prescribes the program’s scope, for instance by requiring it to support at least 20 hubs, contingent on the availability of sufficient funds to establish them.

This push to broaden the geographic distribution of R&D activity was also reflected in a USICA provision that would require NSF to allocate at least 20% of its total budget to the EPSCoR program, which funds projects in states and territories that have historically received a small fraction of NSF funds.

The compromise bill scales back this approach, instead starting the set-aside at 15.5% and increasing it to 20% over seven years, allowing funds allocated to EPSCoR jurisdictions from other NSF programs to count toward the total, and limiting the requirement to a subset of NSF’s budget. The bill establishes an analogous set-aside for the DOE Office of Science, mandating at least 10% of the R&D funds it distributes to universities each year go to institutions in EPSCoR jurisdictions, a narrower requirement than proposed in USICA.

In both cases, the agencies are directed to comply “to the maximum extent practicable” while upholding their commitment to merit-based allocation of funds, giving them leeway to undershoot the targets if they prove too difficult to reach. As of 2021, EPSCoR jurisdictions received about 12% of NSF’s entire budget and 12% of the DOE Office of Science’s budget for university research.

NSF, NIST, and DOE singled out for support

A core purpose of the bill is to set aggressive growth targets for the topline budgets of NSF, NIST, and the DOE Office of Science, as well as for certain major programs within each agency.

It recommends that over the next five years Congress should roughly double the annual budgets of NSF and NIST, to $18.9 billion and $2.3 billion respectively, and increase funding for the DOE Office of Science by nearly 50% to $10.8 billion. It also proposes that parts of DOE beyond the Office of Science receive $4 billion to upgrade infrastructure at national labs and $11.2 billion for work on the same key technology areas supported by the TIP directorate.

These figures mostly represent a blend of proposals offered in the House and Senate bills. One exception is that the bill entirely drops a USICA provision that recommended an immediate doubling of the budget of the Defense Advanced Research Projects Agency. It also omits budget targets for NASA, but still provides policy direction for the agency.

In contrast to the semiconductor funds in the bill, these figures are only “authorizations,” meaning Congress is not obligated to provide the money and will decide whether to meet the targets on a year-by-year basis. Congressional appropriations often fall well short of authorized levels, as occurred with those set by the America COMPETES Acts of 2007 and 2010, which also proposed ramping up the budgets of NSF, DOE, and NIST.

With this history in mind, a group of science organizations unsuccessfully advocated for Congress to include a mandatory “down payment” of $10 billion for these agencies as part of the final legislation. (Several AIP Member Societies are among this group.) 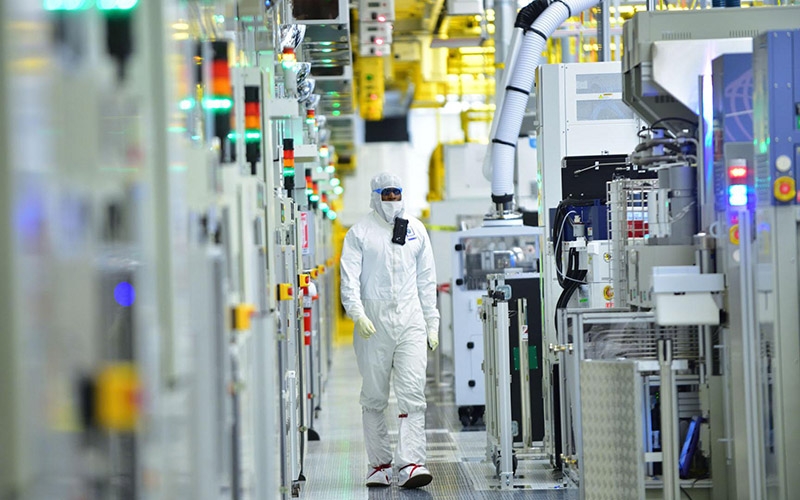 A worker at an Intel chip production facility in 2017. (Image credit – Intel Corporation)

The $52 billion topline appropriation for semiconductor manufacturing and R&D programs is identical to the amounts in the original House and Senate bills except that $200 million has been redirected to NSF to fund new microelectronics workforce initiatives. The money will support activities such as curriculum development, traineeships, faculty hiring, and a “National Network for Microelectronics Education.”

The bill also authorizes new DOE initiatives to support microelectronics R&D, including up to four “Microelectronics Science Research Centers” with a maximum annual budget of up to $25 million each. However, it does not include a corresponding appropriation.

Almost all the semiconductor money is allocated to the Commerce Department, specifically $39 billion to incentivize companies to build semiconductor fabrication facilities in the U.S. and $11 billion for a collection of R&D programs, including a “National Semiconductor Technology Center.” Of the remainder, $2 billion is for the Department of Defense to create a “National Network for Microelectronics R&D.” A summary of these provisions is posted here.

Aside from the semiconductor funds, the bill includes $1.5 billion for the Commerce Department to support development of mobile wireless telecommunications technologies that use open architectures.

The compromise bill contains a host of provisions that aim to prevent foreign governments from exploiting the U.S. research system. Among them are a government-wide prohibition on federal grantees participating in foreign talent recruitment programs that have “malign” intent, and a requirement that NSF-funded institutions disclose funding in excess of $50,000 they receive from foreign entities associated with any “country of concern.”

However, Sen. Rob Portman (R-OH) has protested that the bill does not incorporate his Safeguarding American Innovation Act, which would expand the State Department’s ability to deny visas and make it an explicit federal crime to knowingly fail to disclose foreign funding sources on federal grant applications, among other provisions. His bill was incorporated into USICA, however the COMPETES Act has no similar provisions, suggesting the House may object to its inclusion in the compromise bill.

In a speech on Wednesday, Portman argued Republican senators were misled into thinking his bill was included in the compromise legislation at the time of a procedural vote on Tuesday, which Schumer used to judge support for combining the science provisions with the semiconductor subsidies. The vote result was 64 to 34, with 16 Republicans including Portman joining Democrats in voting yes.

Portman’s amendment to attach his bill is currently cosponsored by five other Republicans who voted yes on the procedural vote, meaning that if they all withhold support for the broader package it could fall short of the 60-vote threshold needed to pass the Senate.

The House does not need Republican support to pass the bill, though Democrats can only afford to lose a few votes from their caucus if Republicans unify in opposition. House Science Committee Ranking Member Frank Lucas (R-OK) has criticized the hasty process the Senate used to assemble the bill and said it added provisions that were not agreed to by the conference committee, but indicated he will withhold judgement until seeing the final bill text.

“Not everyone is going to get all that they originally wanted — including me. But that is the nature of compromise,” she stated.