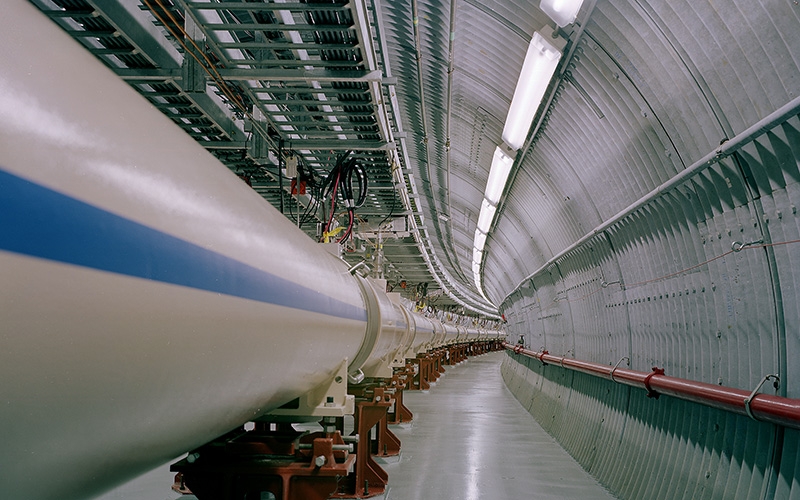 Appearing before the House Science Committee last week, leaders from Brookhaven National Lab and Fermilab testified about the difficulties facing the flagship projects they oversee: the Electron-Ion Collider (EIC) and the Long-Baseline Neutrino Facility and Deep Underground Neutrino Experiment (LBNF/DUNE).

EIC Project Director Jim Yeck reported that Congress has so far funded the collider at levels “well below” those needed to keep the project progressing smoothly. He warned that Brookhaven is in danger of losing personnel needed to ramp up construction after the planned shutdown in 2025 of EIC’s predecessor facility, the Relativistic Heavy Ion Collider (RHIC).

Asked about LBNF/DUNE’s response to its cost increases and schedule delays, Fermilab Director Lia Merminga sought to assure the committee the project is going well. She said it intends to pursue a more aggressive schedule than it was contemplating last year, but remarked that any new delays would be “very detrimental.”

The Science Committee has advocated for Congress to boost the budget for the Department of Energy’s Office of Science, which funds EIC and LBNF/DUNE. It also argued this spring that the Biden administration’s latest budget request would leave various projects underfunded, requiring stretched-out construction schedules and increasing their total costs. However, that message did not filter into spending proposals House appropriators released this week, which closely track the request.

Building EIC involves constructing a new electron accelerator at Brookhaven’s existing RHIC facility, which has been operating since 2000. When complete, the overhauled collider will allow scientists to probe the structure and physics of atomic nuclei with unprecedented precision.

After consulting with DOE, the Science Committee recommended last year that EIC needed $101 million for fiscal year 2022, increasing to $300 million by fiscal year 2025. However, the Biden administration and Congress have pursued a much slower ramp up. For fiscal year 2023, the administration requests a marginal increase to $30 million in construction and “other project costs” funding, while House appropriators propose $35 million for construction without specifying an amount for other project costs.

EIC is currently projected to cost between $1.7 billon and $2.8 billion in total, and Yeck explained that its total cost would be much higher if it were not reusing components of the RHIC facility.

He stressed that ramping up EIC’s budget now is critical to taking advantage of RHIC’s workforce of scientists, engineers, and technicians, who he said have “decades of experience” they can pass on to those who will build and operate the new facility.

“RHIC and its team of talent will serve as a backbone for the EIC. … But without several years of sufficient dedicated funding to ensure a smooth transition from RHIC to EIC, we anticipate layoffs impacting those same individuals,” he said.

Asked by Rep. Conor Lamb (D-PA) whether there are competitor projects elsewhere in the world, Yeck said EIC will be “unique” and that there is worldwide interest in its completion. He did note that China is considering building its own electron-ion collider, but said the U.S. is ahead in its planning.

Pointing again to the need for a seamless handoff from RHIC, he reiterated, “The timing is now for the realization of the Electron-Ion Collider, and it will maintain U.S. leadership in this field with creating a facility that will have international interest and participation.”

Although ubiquitous, neutrinos rarely interact with ordinary matter, and studying their subtle behaviors represents a promising but challenging avenue for advancing fundamental physics. LBNF/DUNE involves constructing equipment at the project’s “Near Site” at Fermilab that will transmit an intense beam of neutrinos to ultra-sensitive detectors installed a kilometer-and-a-half underground at the project’s “Far Site” in South Dakota.

Over the last few years, setbacks during early work have sent LBNF/DUNE’s estimated cost to DOE skyrocketing from less than $2 billion to more than $3 billion. That triggered a requirement that the department formally “reaffirm” its commitment to the project, a move that is expected sometime in the coming months.

Asked by Rep. Jim Baird (R-IN) about changes LBNF/DUNE is making to accommodate increased costs, Lia Merminga challenged reports in Science and Scientific American that it has moved to a “phased” approach that puts off building up to the Far Site’s maximum capacity of four detectors. She said the plan has consistently been to initially build two Far Site detectors and a 1.2-megawatt beam and then upgrade to four detectors and a 2.4-megawatt beam.

Merminga also reported that earlier this year the DOE Office of Science announced it is adopting a new notional funding profile that would allow the project to begin operating in its initial configuration in early 2031. That is one to two years earlier than was expected under a “conservative” profile DOE floated late last year, and Merminga noted it is consistent with the Particle Physics Project Prioritization Panel recommendations that originally led DOE to green-light the project.

Nevertheless, the revised schedule still significantly lags the pace envisioned at the project’s outset in 2015, when it was hoped initial operations would begin in 2026 with the upgrades completed after 2030. That those goals are now seemingly out of reach is important, not least because Japan’s own flagship neutrino experiment, Hyper-Kamiokande, is projected to begin operating in 2027, making it well-positioned to preempt certain key results.

Asked by Rep. Deborah Ross (D-NC) about differences between LBNF/DUNE and Hyper-K, Merminga listed two before Ross’ time expired: LBNF/DUNE’s neutrino beam will traverse a much longer distance and the beam will be composed of more neutrinos with a wider spectrum of energies.

Contacted by FYI about further differences, Merminga added that LBNF/DUNE’s detectors will be filled with liquid argon rather than water, allowing for more precise reconstructions of neutrino interactions. She further explained that the length of LBNF/DUNE’s beam will enable “unambiguous” measurements of the mass ordering of the different types of neutrinos, and that its wide band of energies will allow it to more precisely study the parameters of how neutrinos oscillate between types.

While highlighting LBNF/DUNE’s “competitive advantage” vis-à-vis Hyper-K, Merminga also stressed to FYI that the facilities will work together, writing that “complementarity and confirmation of parameters is essential to our understanding.”

Speaking to Baird, Merminga said excavation at LBNF/DUNE’s Far Site is currently proceeding apace. Although the reaffirmation requirement was only triggered last year, she also indicated cost expectations have been stable since 2019.

“We are delivering the project on schedule, and we’re accelerating in order to win the competition as well,” she said.

In spotlighting DOE’s high-energy and nuclear physics programs, the Science Committee framed last week’s hearing as a look into their investigations of “the nature of matter, energy, space, and time.” However, committee members also expressed interest in the more practical impacts of those investigations.

In his first question to the panel, Energy Subcommittee Chair Jamaal Bowman (D-NY) asked Yeck to discuss EIC’s pertinence to areas such as medicine, electronics, and advanced computing. In reply, Yeck highlighted the R&D on particle accelerators and detectors needed to realize facilities such as EIC.

Answering a similar question from Rep. Suzanne Bonamici (D-OR) about microelectronics, Merminga pointed to the computational needs of high-energy physics projects as spurring on areas such as code design, artificial intelligence, cryogenic operations, and the radiation hardening of circuits.

In his opening remarks, Subcommittee Ranking Member Randy Weber (R-TX) expressed his own support for LBNF/DUNE and EIC. He asserted that if the U.S. does not “demonstrate a commitment to maintaining and modernizing our research infrastructure, we actually risk losing our seat at the head of the table when it comes to international scientific standing.”

Reinforcing the international nature of EIC, Yeck emphasized its user community will comprise more than 1,300 scientists from around the world. Merminga similarly pointed to the more than 1,400 collaborators working on DUNE globally, and to the more than 2,100 U.S. scientists reciprocally working at the CERN particle physics lab in Europe. She further noted that LBNF/DUNE and Fermilab’s related PIP-II accelerator upgrade have attracted more than $1 billion in international funding commitments.

Appearing alongside Yeck and Merminga, Asmeret Asefaw Berhe, the new director of the DOE Office of Science, affirmed her own commitment to the high-energy and nuclear physics programs, citing their global status.