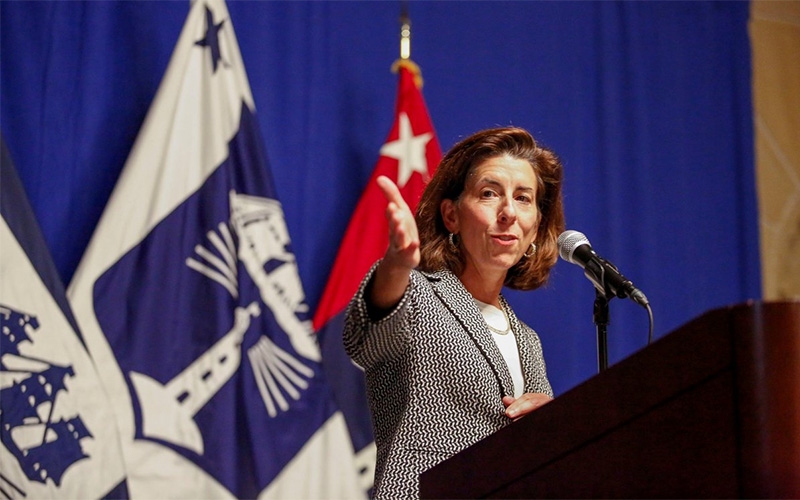 Commerce Secretary Gina Raimondo will be responsible for overseeing regional technology and innovation hubs authorized under the CHIPS and Science Act, as well as most of the act's semiconductor provisions. (Image credit – Department of Commerce)

Regional innovation is a major component of the CHIPS and Science Act that President Biden signed in August. Several programs established or expanded by the law seek to develop industry clusters and spur knowledge-based industries by leveraging universities, federal laboratories, and the private sector. Aside from provisions funded directly through semiconductor-focused parts of the law, future appropriations would be needed to meet the law’s budget targets for these initiatives, which should amount to between $15 billion and $20 billion across five years.

The CHIPS and Science Act regional innovation programs will also be administered through the Commerce Department and its subsidiary agency the National Institute of Standards and Technology, as well as through the National Science Foundation. These efforts are complemented by other provisions in the act, such as ones to expand research funding for EPSCoR states and to strengthen research institutions in rural areas.

Because the semiconductor provisions are already funded, work on them is ramping up quickly. Last month, the Commerce Department released an implementation strategy that highlights the role of regional manufacturing clusters in the industry.

On manufacturing incentives, which account for $39 billion of the $52 billion appropriated in the legislation, the strategy states, “The department expects to give preference to projects that include state and local incentive packages that maximize regional and local competitiveness, invest in the surrounding community, and prioritize broad economic gains, rather than outsized financial contributions to a single company.”

Department officials reiterated the importance of regional clusters during a series of public briefings on the strategy. Rather than funding construction or upgrades for chip foundries immediately, the department stated that it intends to take a long-term ecosystem-building approach to funding.

Senior official Sreenivas Ramaswamy remarked the goal is to “create a domestic ecosystem for national and economic security.” To accomplish this, regional ecosystems are supposed to create economies of scale across entire supply chains encompassing manufacturing facilities, tool makers, specialty construction, and other suppliers.

States and localities are envisioned as pivotal to these efforts, providing matching contributions in the form of tax incentives, zoning changes, infrastructure improvements, workforce training, and other measures. Colleges and universities are also expected to be important partners within the regional ecosystems and especially the R&D and workforce-development elements of any successful proposal.

The President’s Council of Advisors on Science and Technology (PCAST) has also proposed the department pursue a "geographically distributed model" for the $11 billion in CHIPS R&D funding, including the lead entity established by the legislation, the National Semiconductor Technology Center. PCAST specifically recommends the center comprise “up to six coalitions of excellence aligned around major technical thrusts,” including advanced logic, packaging, and advanced design methodologies.

Similarly, the council endorses the act’s creation of a “national microelectronics training network” overseen by the Commerce Department in coordination with NSF, supporting “at least 50 ‘hub’ universities and colleges geographically distributed across the country, including minority-serving institutions."

As with the Build Back Better Regional Challenge, the hubs are to be public-private consortiums made up of universities, economic development organizations, industry, rural communities, state and local governments, and nonprofit organizations concentrated within a geographic area. Applicants will be required to demonstrate how hubs will transform their area into a locus for innovation and technological development, and they will be selected through a competitive, merit-reviewed process.

In addition, the legislation authorizes the award of strategy development grants and cooperative agreements, which are similar to planning grants, for regions to develop or update comprehensive regional technology strategies.

All projects funded through the program must be located in areas that are not leading technology centers, with at least three new hubs located in each of the six regional divisions used by the Commerce Department’s Economic Development Administration. The act also contains language to ensure that at least one-third of eligible consortia “significantly benefit small and rural communities” as well as EPSCoR states, and that at least one consortium be headquartered in a “low-population” EPSCoR state.

In tandem with the hub program, the legislation also establishes a competitive “Recompete Pilot Program” with a target five-year budget of $1 billion. The program is aimed at communities and Tribal lands meeting a specified level of economic distress, measured by low household income and persistent unemployment or underemployment rates.

Recompete grants are to be for no less than $20 million. Eligible regions would be allowed substantial flexibility in designing plans around a wide range of activities, including workforce development and outreach, job training, business and entrepreneurship development, business assistance, technology development, and infrastructure construction.

Another initiative authorized in the act is NSF’s Regional Innovation Engines program. Commonly referred to as NSF Engines, it is the flagship initiative of the agency’s new Technology, Innovation, and Partnerships (TIP) Directorate.

Discussing the Engines program, TIP Directorate head Erwin Gianchandani has said it amounts to a “paradigm shift” for NSF, because it will aim to support research inspired by market demands rather than push results from laboratory research into the market. Similarly, the explicit focus on regional innovation outlined in the CHIPS and Science Act represents a significant addition to NSF’s mission.

The act accordingly specifies that, in evaluating Engine proposals, NSF should consider factors beyond scientific and technical merit. These include the ability to: create or enhance an innovation ecosystem, create jobs, foster partnerships among regional stakeholders, and broaden participation of historically underrepresented populations in STEM. In a nod to concerns about research security, applications are to include a plan for preventing inappropriate use or dissemination of research and technology.

In addition, the act directs NSF to use the Engines to advance work in the “key technology focus areas” as well as to address the “regional, national, societal, or geostrategic challenges” that are to be focal points for the TIP Directorate as a whole. Initial lists of these areas and challenges are found in the act and are to be routinely updated by the agency going forward.

The Hollings Manufacturing Extension Partnership (MEP) is one of the earliest regional innovation programs at NIST, dating back to the 1980s. The CHIPS and Science Act renews the authorization for the program and expands its reach, setting a budget target of $2.23 billion over five years, or on average $440 million annually, which is nearly three times its current budget.

MEP is also provided additional authority to assist small and medium-sized manufacturers with cybersecurity, workforce training, and supply-chain resiliency, as well as establish demonstration laboratories for developing next-generation technologies that manufacturers can adopt.

The act also recommends boosting funding for the Manufacturing USA program at NIST by $744 million across five years to support at least ten new competitively awarded manufacturing institutes with expanded capacity for education and workforce development. In making funding decisions, the program is instructed to prioritize geographic diversity, areas with low per capita income, areas with a high proportion of socially disadvantaged residents, and small and rural communities. Manufacturing USA institutes are also directed to increase participation of minority-serving institutions, minority business enterprises, and rural-serving institutions.

The Regional Clean Energy Partnerships program at the Department of Energy is a new initiative authorized in the act that follows recommendations from a 2016 National Academies report to spur innovations in the clean-energy sector. The act sets a budget target of $250 million over five years to fund partnerships and planning grants that promote economic development in a diverse set of geographic areas across the U.S. Awards are capped at $10 million over five years and require a 50% cost-share in the final three years of the grant, with an option for a five-year renewal.