US Restricts Science Collaborations with Russia

The U.S. is sunsetting research collaborations with Russia in response to its war against Ukraine, joining a coalition of countries that have already moved to restrict ties with research institutions affiliated with the Russian government. 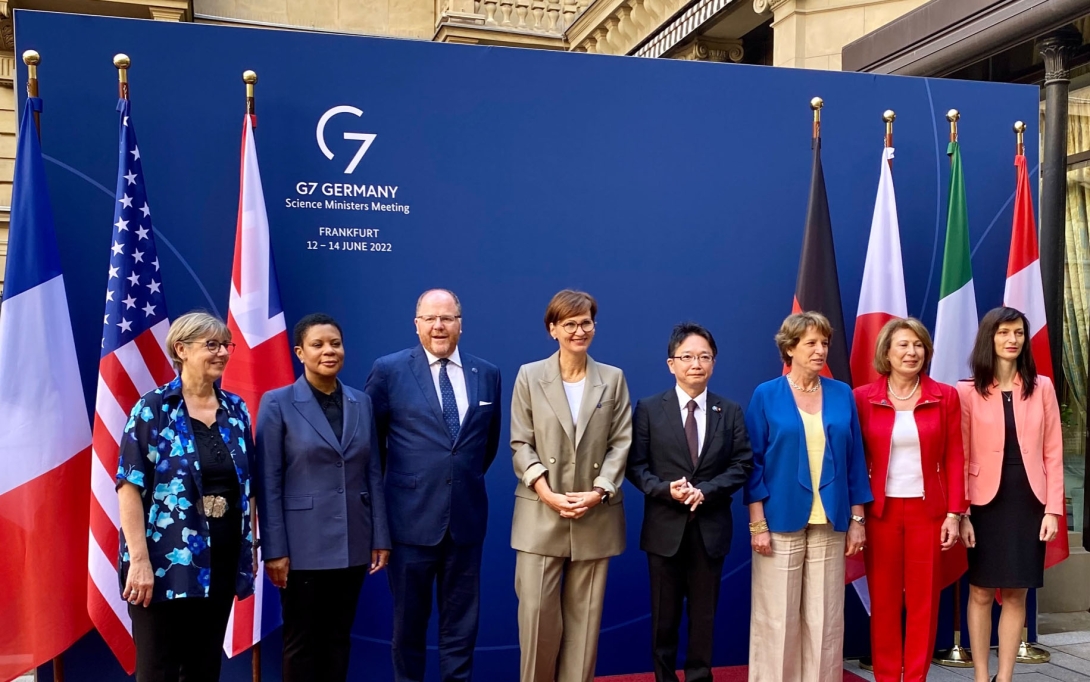 The U.S. announced its restrictions on science partnerships with Russia just before a meeting of science ministers of the G7 countries. Acting White House Office of Science and Technology Policy Director Alondra Nelson is standing second from left. (Image credit – OSTP)

The White House Office of Science and Technology Policy announced on June 11 that the U.S. will “wind down” research collaborations with Russia in response to its invasion of Ukraine. The policy applies to federally funded projects involving research institutions and individuals affiliated with the Russian government, and it permits non-government organizations in the U.S. to make their own decisions on whether to continue collaborations.

The announcement arrived just before OSTP Acting Director Alondra Nelson participated in a summit of science ministers from the G7 countries, comprising the U.S., U.K., France, Germany, Italy, Japan, and Canada. In a joint statement, the ministers declared their commitment to restricting government-funded research projects involving participation by the Russian government, though they left the door open for engagement with individual scientists.

“In the spirit of science diplomacy, we will continue the dialogue between civil societies, including exchanges with Russian scientists and students to the furthest extent possible, especially through the promotion of individual academic and student mobility,” they wrote.

While the U.S. was quick to implement sweeping economic sanctions and technology export controls on Russia, the White House had until now been silent on whether it would pause or sever scientific ties between the countries. By contrast, many European countries moved quickly to impose official restrictions on science collaborations.

OSTP and the State Department declined requests for interviews about the new U.S. policy but provided written responses to some questions.

Explaining why the U.S. chose to take an explicit stance on restricting science collaborations, a State Department spokesperson stated, “Considering Russia’s war crimes and other atrocities committed by Russia’s forces in Ukraine, we recognize the importance that we make clear what our research policy is to those who are ultimately responsible for implementing it.”

The policy applies to both federal agencies and organizations they sponsor, such as national labs, and instructs such organizations to contact their agency sponsor for further guidance.

In general, the policy prohibits new projects in “affected subject areas,” but ones begun before the start of the invasion on Feb. 24 will be allowed to continue to completion. Federal agencies will also “curtail interaction” with leaders of institutions affiliated with the Russian government as well as with “those who have publicly expressed support for the invasion of Ukraine.”

While the policy states the U.S. will limit engagement with Russia in “various international projects and initiatives related to science and technology,” it indicates partnerships will continue in areas where required by “international law.”

An OSTP spokesperson identified the ITER fusion facility under construction in France as an example of a multilateral project where the U.S. is compelled to continue engagement with Russia, which is a founding member of ITER.

“There is no provision for expulsion of a member state from the ITER project,” the spokesperson stated. “The U.S. is in close cooperation with its European, Indian, Japanese, and Korean partners concerning Russia’s future participation. Fusion energy science, including our continued membership in ITER, continues to be a priority for the Biden-Harris administration.”

The spokesperson also offered one example of the U.S. curtailing interaction with Russia, pointing to its decision in March to freeze participation in the Arctic Council, a forum currently chaired by Russia that coordinates multilateral activities in the region, including research. The spokesperson noted that on June 8 the U.S. and other Arctic Council nations announced they would resume some projects so long as they do not involve participation by the Russian government.

Beyond ITER, the U.S. also has significant partnerships with Russia through the CERN particle physics lab in Europe. Russia and the U.S. are not CERN member states but both are among the largest contributors to the facility, with more than 1,000 scientists affiliated with Russian institutions currently involved in the lab’s experimental program.

Confirming the decision's impact on scientists, a CERN spokesperson stated, “They can continue their scientific work on current activities until the expiry. If at that time their institutions are outside Russia and Belarus, they may continue to work at CERN. The Council’s decision applies to the countries and their institutions, not to individuals.”

One outstanding question is whether Russian scientists will be permitted to participate in projects involving the Department of Energy’s user facilities, such as its X-ray and neutron sources, which are open to scientists from around the world. Based on statistics compiled by DOE, 220 Russian scientists used the facilities in the fiscal year preceding the pandemic. Two Russian nuclear science institutions are also partners on the internationally administered Deep Underground Neutrino Experiment, which will be built in South Dakota.

OSTP deferred to individual science agencies for examples of projects that will be affected by the new policy. A spokesperson for the DOE Office of Science declined to comment, while a spokesperson for the National Science Foundation indicated the agency is “unlikely to make new [grant] awards with Russian collaboration.”

The spokesperson noted NSF generally does not directly fund Russian institutions but has a “handful” of grants to U.S. institutions with subawards to Russian entities, often for field technicians. “We encourage all researchers to consider whether this is the best time for activity involving Russian collaboration or fieldwork, given the current situation and risks associated with it. Researchers are encouraged to consider whether their research objectives can be accomplished through other means,” the spokesperson stated.

In NSF’s grant database, a few dozen active projects reference Russia, primarily in relation to Arctic research. The database lists three grants where the primary recipient was a Russian institution, all involving cases where NSF paid for a Russian icebreaker to resupply McMurdo Station in Antarctica a handful of times prior to 2014.

In general, U.S. government collaboration with Russia chilled significantly following its seizure of Crimea from Ukraine in 2014, with a key exception being the continued joint operation of the International Space Station, which is a legally binding partnership. Although Russian space agency head Dmitry Rogozin has made some inflammatory statements about the ISS partnership, it has to date weathered strain from the war.

The OSTP policy notes many scientists in Russia have criticized the war and that Russia’s punishment of dissenters has made it difficult for them to speak out. Accordingly, it states the U.S. will “seek to ensure that Russian scientists who have chosen to leave Russia and/or remain in the United States due to their convictions are supported and not discriminated against or stigmatized.”

OSTP referred questions on what such support might entail to the State Department. A spokesperson for the department stated generally, “There is ample evidence that many Russians, including those highly educated in technical fields, no longer wish to live in Russia as consequence of Putin’s war. Some have spoken out against Putin’s war or signed open letters opposing it. We want to ensure these individuals — including Russian scientists — have a clear pathway to leave Russia if they so choose and to use their talent for the benefit of the United States and the world.“

In April, the Biden administration requested that Congress create a fast-track visa for Russian citizens with advanced degrees in STEM fields, as part of a broader legislative aid package to assist Ukraine. However, the proposal was omitted from the final legislation, reportedly due to opposition from Republican lawmakers.

Meanwhile, institutions in the U.S. and Europe have focused on providing support to Ukrainian scientists displaced by the conflict. For instance, the DOE Office of Science has invited supplemental funding requests to add Ukrainian students and scientists to current projects, including via remote collaboration. The U.S. National Academy of Sciences and Polish Academy of Sciences have also partnered to raise funds to help resettle Ukrainian researchers.

In addition, discussions have already begun about rebuilding education and science infrastructure in Ukraine. The science academies of the U.S. and several European countries have drafted a list of priority actions, such as donating lab equipment and providing Ukrainians free access to scholarly journals.

Ukrainian President Volodymyr Zelenskyy has personally asked for support in rebuilding educational institutions that have been damaged by Russia’s invasion. During an hour-long conversation with U.S. university presidents on May 16, he said, “We would be very grateful if we can do some twinning. And when we discuss reconstruction, this is not just about money, this is about expertise.”

Zelenskyy suggested the partnerships could involve technical support for both physical reconstruction and curriculum design, saying such work is key to ensuring displaced Ukrainians return. “It is of vital importance for us for the students, for the researchers to come back, because without education, without studentship, we will face a terrible stagnation.”

He also argued that Russian students currently studying in the U.S. have an obligation to speak out against the war. “If they don't speak up, they just take your knowledge,” he said, suggesting some might use the expertise gained in the U.S. to advance Russia’s war effort when they return home.