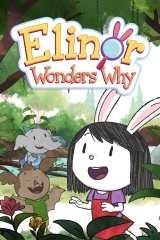 What’s especially fascinating about this book, is that even though it was published over 150 years ago, it bears a striking resemblance to STEAM edutainment for children today. The children’s tv show Elinor Wonders Why (which I watch almost every morning with my preschooler) has a very similar premise. The children go about their normal activities until they encounter a curiosity or question, they follow the scientific method, proposing a hypothesis and conducting an experiment, and evaluating their results. Young children are grounded in science without even realizing it’s happening.

The Rollo Series, by Jacob Abbott, which Rollo’s Experiments is a part of, also has an interesting publishing history. The publisher hired Abbott to write a text to accompany illustrations. Jacob Abbott himself was a minister, though he studied natural philosophy and mathematics at Amherst College, and he wrote the Rollo series not so much to entertain as he did to teach morality to his young readers. Other books in the series feature Rollo at work, play, school, vacation, a museum, traveling, corresponding, and reckoning with philosophy. The books are clearly intended for a young audience, as they were written in very simple, plain language. In fact, Abbott wrote some of the first true fiction series specifically for children in the country.

Below are some other children’s and educational science books from the 19th and early 20th centuries, followed by more modern books. 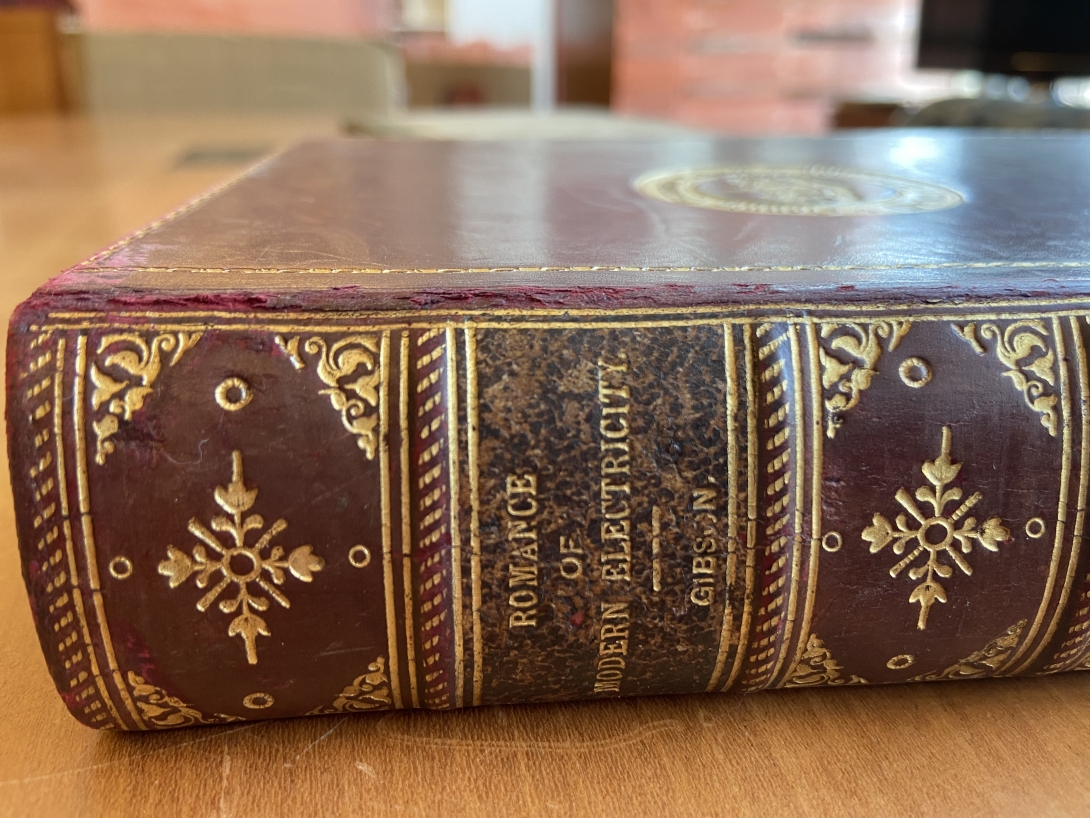 Not only are school children the intended audience for this book, it was also bound and given out as a school prize by the Market Harborough Country Grammar School. This copy of the book was presented by Fellows of the Royal Institute of British Architects to Alfred Neal Jesson as an award for his drawing skills in 1909. Alfred perhaps didn’t treasure the book that much (I can’t blame him, if I’d won a prize for my art I don’t think I’d want a book on electricity, maybe some nice colored pencils?) because there’s also a book plate from Peter Beaumont Flegg. Check out the image gallery at the bottom of this post to see the prize plate and other fun bits of this book. 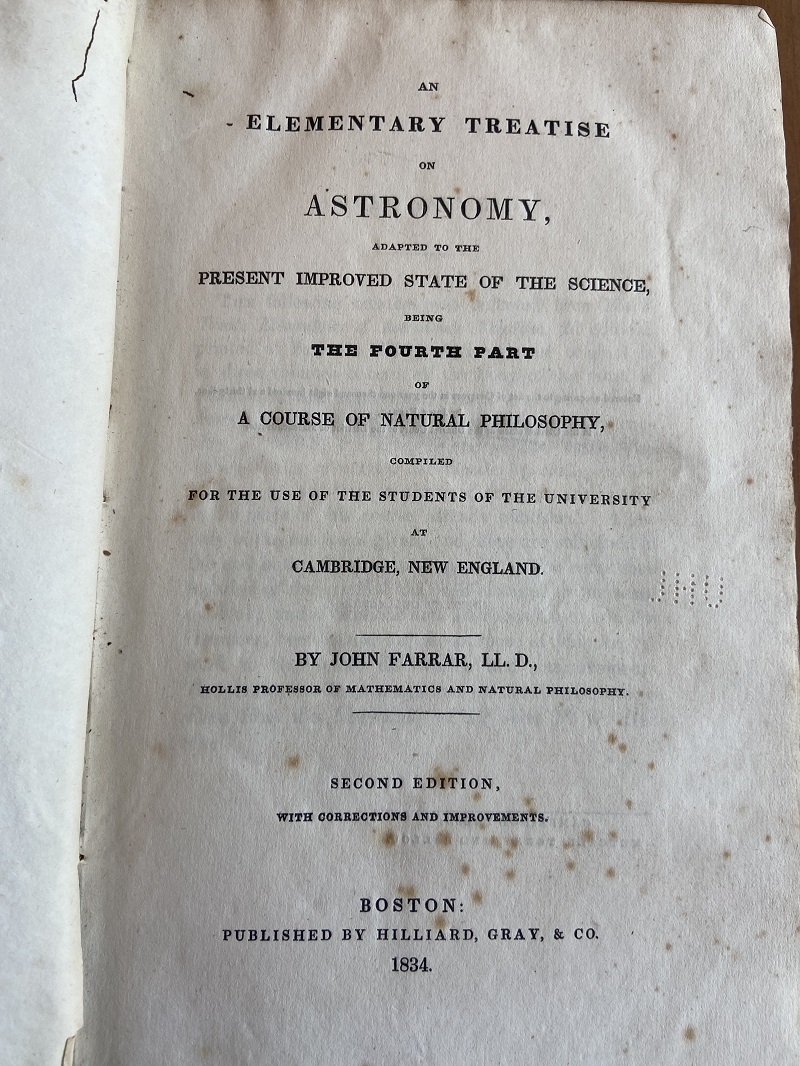 John Farrar clearly intended this book for use by students as he published this course on natural philosophy he taught at the University of Cambridge (not the one you’re thinking of, this is just a fancy way of referring to Harvard, which is famously not fancy enough). John Farrar was a professor at Harvard and introduced modern mathematics to the curriculum. He was also an early storm-chaser of sorts; he published his observations of the Great September Gale of 1815 (precursor to the word hurricane). 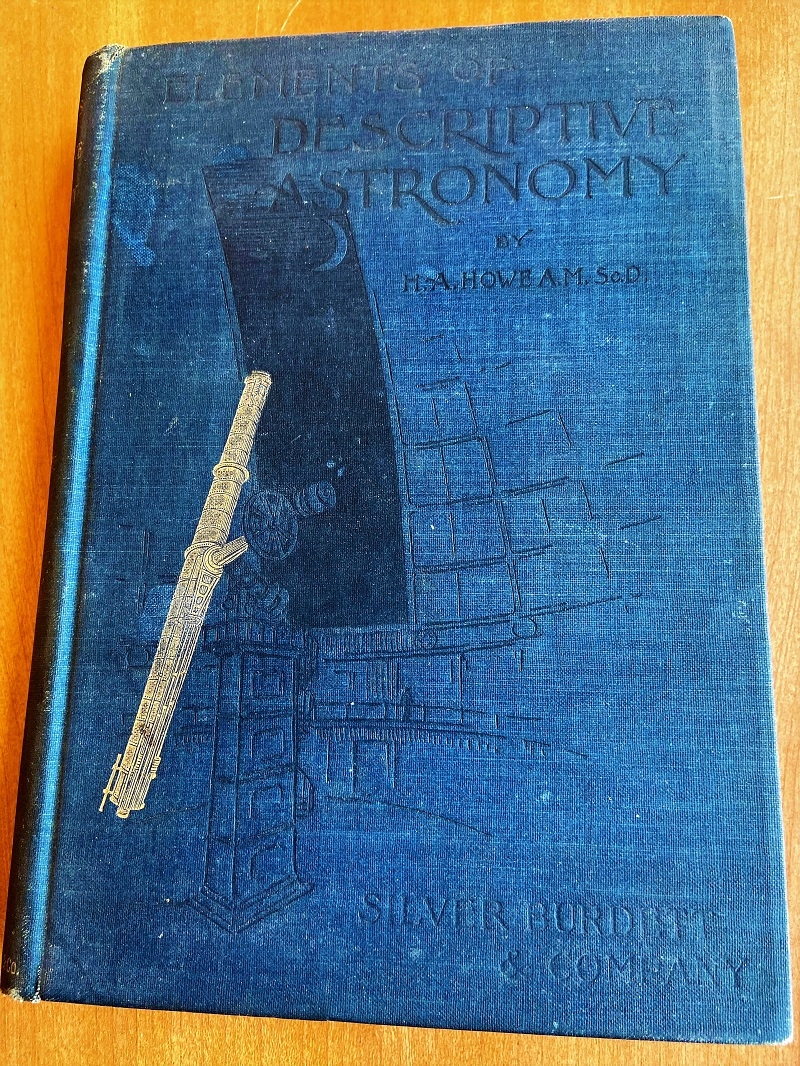 Elements of Descriptive Astronomy by Herbert A. Howe, 1898

Herbert Howe was a Professor of Astronomy at the University of Denver and Director of the Chamberlin Observatory and he wrote this book for both beginners and more advanced scholars in mind. He was passionate about students doing astronomical observations with their own eyes, “though they may be bewildered by such work at first, they will soon learn to delight in it” (Howe IV). He encourages students to keep a record of their observations of the night sky with sketches and other results. 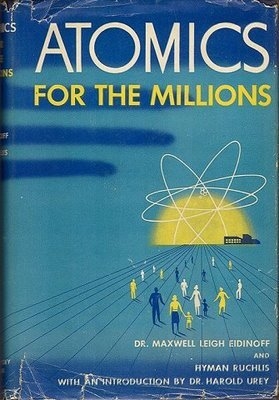 Atomics for the millions / by Maxwell Leigh Eidinoff and Hyman Ruchlis, illustrated by Maurice Sendak, with an introduction by Harold C. Urey, 1947

Atomics for the Millions is our modern books star acquisition for 2021. Published in 1947, it is significant for its content and context, but perhaps more so for its engaging and fantastic illustrations. You might recognize the name of the illustrator, Maurice Sendak, for a mildly popular* children’s book: Where the Wild Things Are (1963). 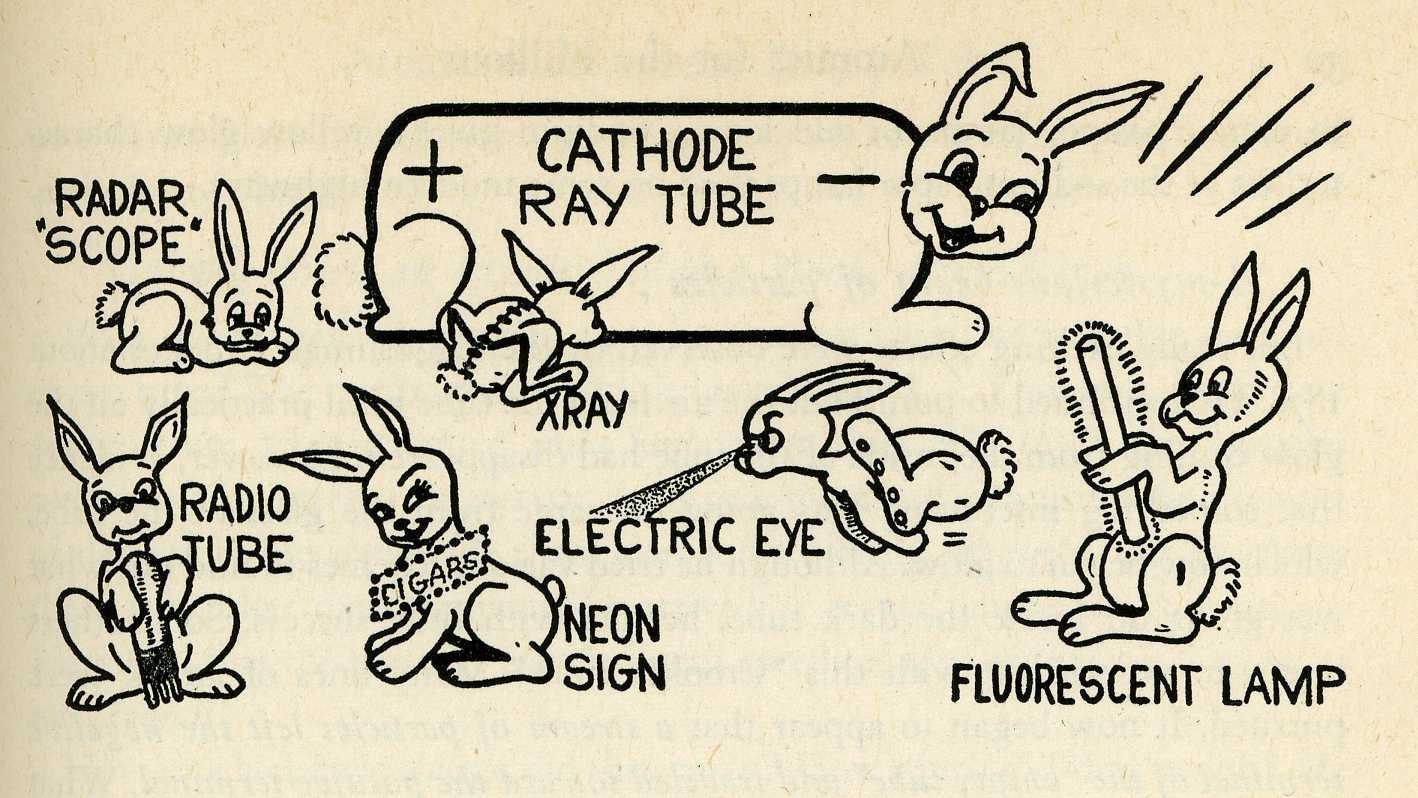 Image: Chapter heading illustration for "Atomic Secrets from Empty Tubes" in Atomics for the Millions. Illustration by Maurice Sendak.

In 1947, the field of physics was changed forever by the development of the atomic bomb and its role in World War II. Physicists were lauded for its creation, but the public was also in need of explanations of this new technology. This book was written with non-technical language and furnished with cartoon-style illustrations with the intention of explaining atomic technology to school-aged children and to adults, making “atomics” accessible for everyone. The co-author, Hyman Ruchlis, happened to teach high school physics. Maurice Sendak was an eighteen-year-old student in his class and was known for his illustration work in the school’s literary magazine. Ruchlis asked Sendak to do the illustrations for Atomics for the Millions, giving Sendak his first book illustration job. NBLA’s copy of the book has the dust jacket, which is somewhat rare.

*By which we mean enormously, wildly popular. 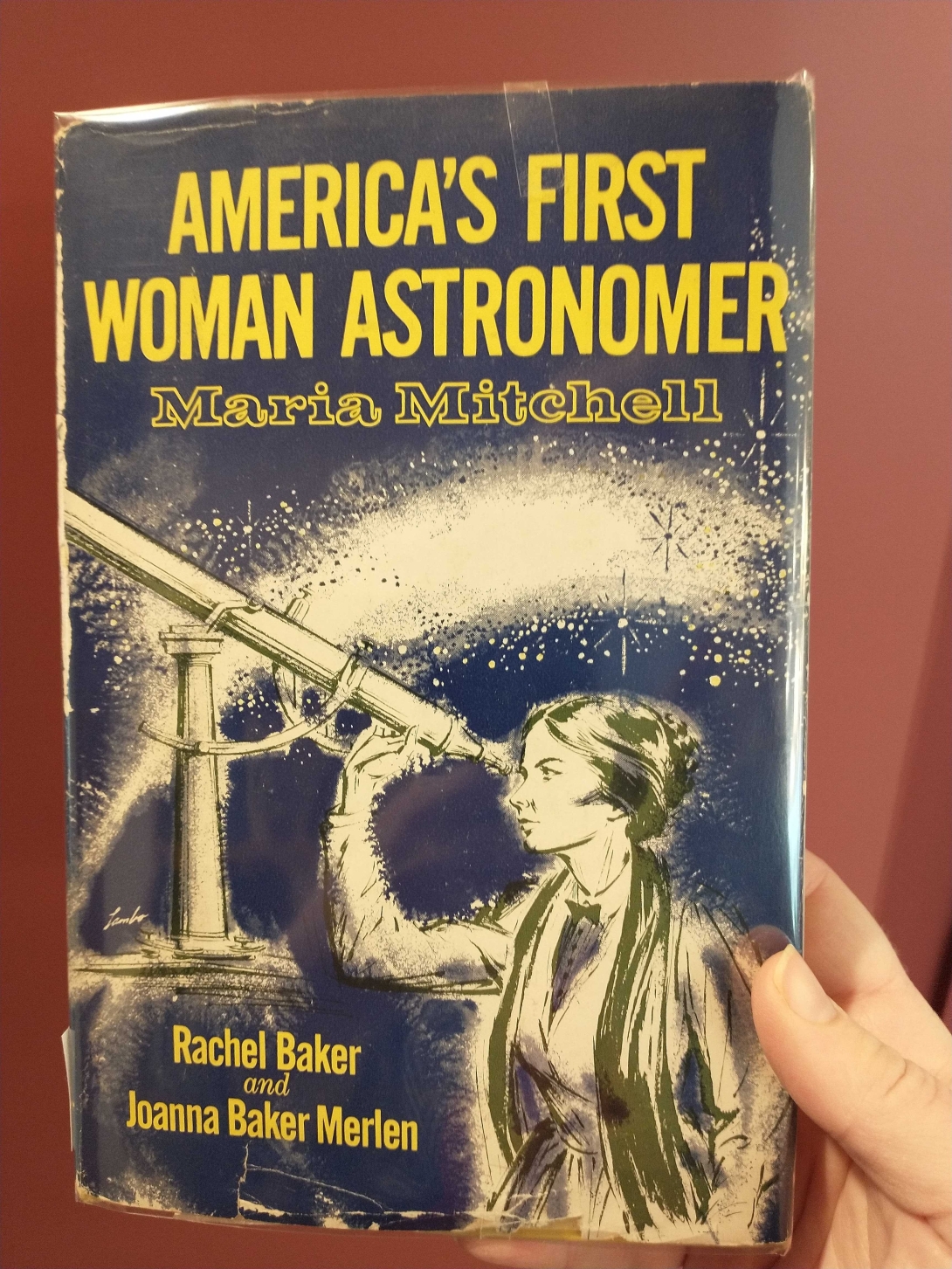 A better title for this book would be America’s First Recognized Woman Astronomer, as there were astronomers before Maria Mitchell, but she  was significantly the first woman Professor of Astronomy at Vassar College and the first woman elected to the American Academy of Arts and Sciences. This delightful fictionalized biography, published in 1960 and written by a mother-daughter team, is written in accessible language for a younger audience, intended to inspire girls and young women in the time it was written. Though Maria Mitchell isn’t perhaps a household name, this is one of the earlier examples of a book that is only about Mitchell and that popularizes her life and accomplishments. It’s one of several books that we purchased with inspiration from Margaret Landis’ 2021 Honey and Beeswax prizewinning bibliography on the astronomer.

Nikola Tesla for Kids: His Life, Ideas, and Inventions, with 21 Activities by Amy O’Quinn, 2019

What could make historical figures more interesting, even such a fascinating figure as inventor and physicist Nikola Tesla? Activities! Specifically, scientific experiments. In addition to constructing electric circuits and investigating the nature of electromagnetic waves, activities include making fluorescent slime. 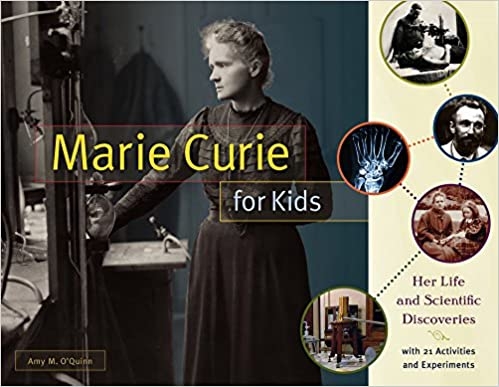 Marie Curie for Kids: Her Life and Scientific Discoveries, with 21 Activities and Experiments by Amy O’Quinn, 2016

Similarly, Marie Curie for Kids draws the reader into Marie Curie’s world with a powerful combination of stories about Marie Curie’s work and personal life, her science, and integrated activities: including examining real World War I X-rays, making a model of the element carbon, and making traditional Polish pierogies. 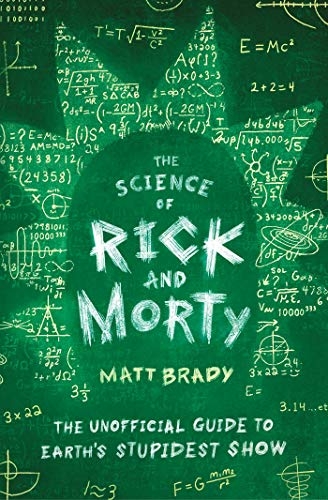 The Science of Rick and Morty by Matt Brady, 2019

Love it or hate it, the TV show Rick and Morty, starring mad scientist Rick and his grandson Morty, is undeniably a modern cultural phenomenon. How do the wacky intergalactic adventures in the show relate to real-life biology, physics, and chemistry? This book gives readers a way to understand concepts like dark matter and human regeneration in a different way. Readers can also consider how science is portrayed in pop culture in the late 2010s. An unconventional education indeed.

NBLA has many graphic novels and books with illustrations, but Quantoons has perhaps the most detailed comic-style illustrations in the collection. From the publisher: “Quantoons combines challenging problems and provocative quotes with intricate drawings that mix Isaac Newton and Marie Antoinette with Romeo, Juliet, and Einstein. The book is a compilation of 58 contest problems that ran between 1991 and 2001 in Quantum magazine; a collaboration between U.S. and Russian scientists that was published by the National Science Teaching Association. In addition to serving as a reader- involvement device, the problems and cartoons were intended to make inquiring minds think about physics and art in new ways and have fun doing it. When you open Quantoons, you‘ll be instantly attracted to the colorful cartoons, densely populated with quirky characters that look like something out of MAD magazine. And no wonder: Illustrator Tomas Bunk is a regular contributor to that publication! But when you pull yourself away from the drawings, you’ll find that they work with the text to give new context to interesting physics concepts. For example, a Quantoon that explores the classic physics problem of crossing a raging river and determining where you‘ll land on the opposite shore is accompanied by a funny/sad metaphorical cartoon about traversing the river of life from birth to death.” 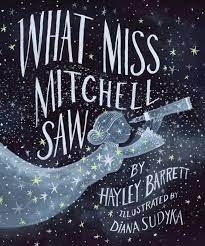 This beautiful picture book is a biography of Maria Mitchell (pronounced Ma-Rye-Uh, the book adamantly states on the first page), astronomer, librarian, teacher, and discoverer of the eponymous Miss Mitchell’s Comet (official astronomical name C/1847 T1). Grown-ups and kids alike will enjoy this one because it’s a joy to read and to view. Instead of covering Miss Mitchell’s life in excruciating detail, the author focuses on a couple of themes throughout Maria Mitchell’s life: naming and seeing. Through this repetition of Maria seeing and naming stars, ships, shopkeepers, etc. we know that it was significant that she saw a comet and even more astounding that she got credit for her work. The book ends with the powerful line, “Miss Mitchell saw a comet. The world saw her.” 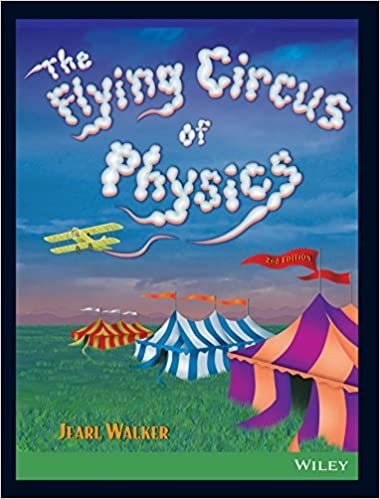 In 1968, Jearl Walker had an eye-opening moment: after failing a physics test, a student asked him what any of it had to do with real life. Walker was stumped in the moment and failed to come up with an example. He then embarked on a journey to find hundreds of real-life examples of physics for students, and the first edition of The Flying Circus of Physics was published in 1975. Both editions are written in non-technical, engaging language and have questions and answers, accompanied by illustrations. NBLA has had the first edition for many years and we were happy to add the second edition to our collection last year. In this second edition, published in 2007, Walker presents entirely new questions and answers, such as: 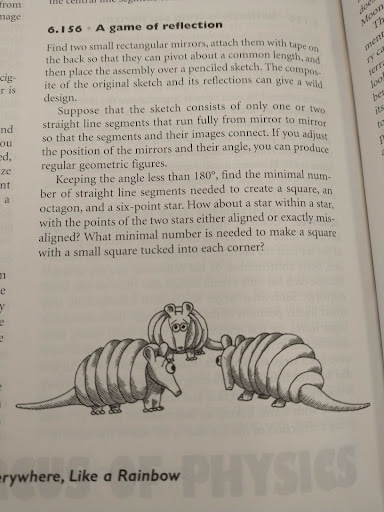 Page in The Flying Circus of Physics, 2nd ed.