Only 21% of physics bachelor’s degrees and 20% of physics doctorates were received by women in 2017 [1]. Female-identifying physicists also reported slower career progression as compared to men; just 10% of physics professors were women in 2014. There is a clear call to increase gender diversity in physics.

Historically, this trend is even more pronounced. Representation of historic women in physics is nearly nonexistent in mainstream media and academia.

Seeing someone succeed who looks like us, thinks like us, or has a similar cultural background to us makes our goals seem much more attainable. -Heidi Hui

Heidi Hui, former Director of Communications for the Society for Canadian Women in Science & Technology, answers the question of how we can increase diversity in the field by describing the necessity of having role models of all backgrounds [2]. By amplifying the voices of women in the field, more women may feel more welcomed and inspired to join, setting new trends. Demonstrating that anyone can be a physicist is important from a young age, as Jess Wade describes, because “representation of women scientists in the media also plays an important role in shaping girls’ and women’s ideas of what they can be” [3].

This past summer, I set out on a mission with the Center for History of Physics (CHP) and Niels Bohr Library & Archives (NBLA) to highlight two particular underrepresented female voices in physics: Katherine Clerk Maxwell and Émilie du Châtelet.

Both impressive women have been remembered most because of the men around them, rather than for the merits of their own accomplishments. Katherine is almost solely recorded in the context of her husband James Clerk Maxwell, and Émilie is remembered most as Voltaire’s lover; these women are nearly never mentioned without also highlighting these men. The same cannot be said of Voltaire or James Clerk Maxwell.

Though both women share this fate, the research processes to learn more about each woman were notably different. This is because of the vastly different circumstances of the women's lives and the accessibility to information about them. Though formal education was either impossible or heavily frowned upon for women in the 1700s and 1800s, both Katherine and Émilie were able to contribute to physics research. However, Katherine is only recorded in a few documents of her husband’s correspondence with close friends, whereas Émilie was a prominent member of the French aristocracy during the revolution, and (despite gender discrimination) was able to make herself known and publish some of her own works.

I initially set out to find underdog stories of two amazing women in physics and publicize their stories as best as I could. I created teaching guides on each of them for young kids (found under AIP’s ‘Materials for Teachers and Students: Teaching Guides and Educational Games on History of the Physical Sciences,’ linked here) [4] and wrote articles about their research and their lives in this attempt to amplify their voices. However, researching these two women was an eye-opening experience: records on Katherine were nearly nonexistent, and though sources on Émilie were far easier to find, her role is primarily described as related to her romantic affairs rather than her enormous intellect. The kind of investigation required to find the reality of their careers was therefore vastly different. 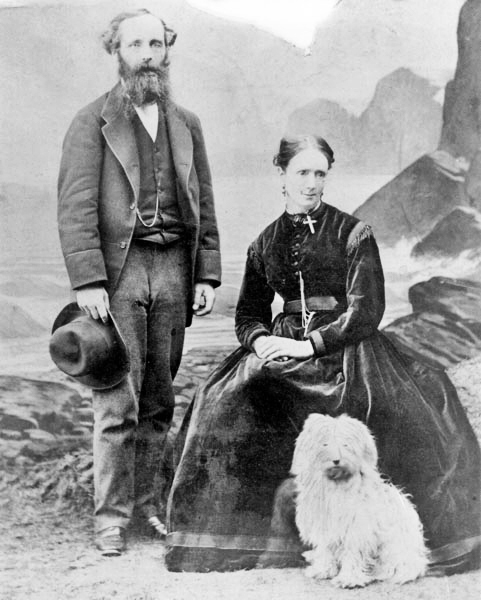 As she is relatively unheard of, researching Katherine's work was very difficult and different from any analysis that I have done in previous academic settings. Records of Katherine were revealed through archival research, relying heavily on primary sources.

This means that I had to do a lot of digging through letters, postcards, papers, etc. All of these sources were in the context of James Clerk Maxwell, Katherine’s husband, as none of Katherine’s own records had been preserved. So, I spent weeks poking through James’ correspondence, his biography [5] that was written by one of his close friends, and any of his works around the times when I knew that Katherine may have been involved in research. I reached out to an expert of James’ life, Dr. Bruce J. Hunt, as well as the Cavendish Library and University of Cambridge that James himself worked at in the 1800s as they hold many of his archival records. This was all in an effort to try to find any element of Katherine's existence and role in helping with her husband's experiments.

One example of Katherine’s involvement in James’s work is revealed in his 1860 paper “On the Theory of Compound Colours, and the Relations of the Colors of the Spectrum.” [6] James Clerk Maxwell wrote down the observations of “observer J. (myself)” to represent himself on page 70. However, on the same page, there is a second observer listed as “another observer (K.)”. Though there is no name tied directly to observer K, correspondence between James and his close friend Lewis Campbell reveal that it is Katherine.

In addition, Katherine’s work on James’ experiments on gasses is disclosed through two sources of correspondence with James’ friends: in an 1877 postcard to Peter Guthrie Tait and in a biography on James written by two of his friends (Lewis Campbell and William Garnett) published in 1882. James was studying the viscosity of gasses, eventually producing “On the viscosity or internal friction of air and other gasses” in 1886. These experiments required a considerable amount of manual effort to produce steam and maintain different required temperatures. A fire had to be kept going for many days in some experiments, with ice employed to keep it cool in others, and “Mrs. Maxwell acted as stoker, which was very exhausting work when maintained for several consecutive hours” [5]. James also wrote in a postcard to Peter Guthrie Tait that “my better 1/2, who did all the real work of the kinetic theory is at present engaged in other researches. When she is done I will let you know her answer to your enquiry.”  James thus reveals the physical work that Katherine put into the experiment, although Tait’s original enquiry, as well as following correspondence, has been lost.