“Tea, Earl Grey, Hot,” is a familiar line if you have watched Star Trek: The Next Generation. In that show, Captain Jean-Luc Piccard orders his favorite beverage from the replicator in the same manner in practically every episode. A nice hot tea is also my beverage of choice during the cold winter months. Looking through the Emilio Segrè Visual Archives, it is clear many a physicist has also enjoyed a delicious cup of tea. Enjoy this Photos of the Month post on the theme of tea with a cup of your favorite winter beverage. 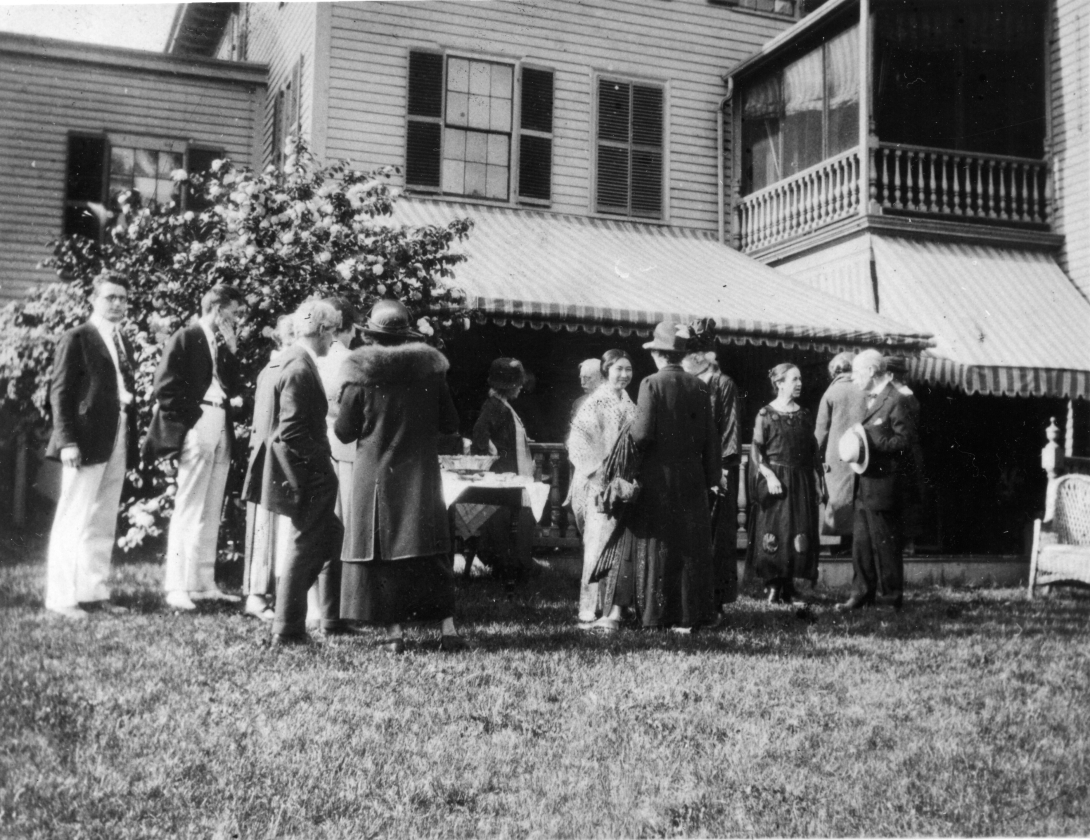 Let’s start with a visit to the Harvard College Observatory where tea is being enjoyed outdoors on a day that doesn’t look like winter at all. Left to right are pictured staff members Donald H. Menzel, Willem J. Luyton, and Leon Campbell. At the far right, Miss Mowry is speaking with Clyde Fisher of the American Museum of Natural History. Also pictured in the center are Edward Skinner King and Mrs. Yamamoto, likely the wife of Issei Yamamoto.

There is currently a project underway to catalog, digitize, and transcribe all the handwritten notebooks produced by the astronomers and staff of the Harvard College Observatory. You can read more about Project PHaEDRA and why it is important for the history of women in astronomy in an article from the Spring 2022 AIP History Newsletter. 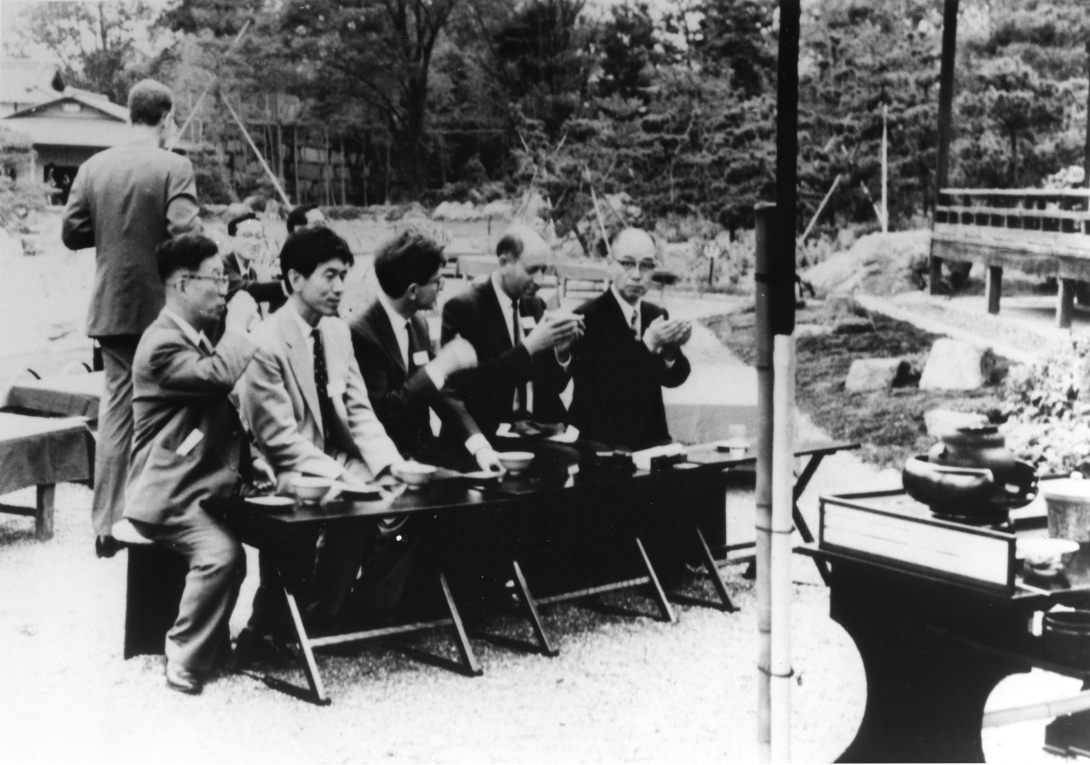 Weather permitting, tea is a wonderful thing to enjoy outdoors. It looks like the weather was very nice in September 1965 during the International Conference on Elementary Particles held in Kyoto. Pictured here at a tea party are (at least three) prominent particle physicists. (And possibly more; if you know the names of the two unidentified people in the center, please do write in to [email protected]!) Shoichi Sakata was a theoretical physicist who postulated the Sakata model, a precursor to the quark model. Sakata studied under Hideki Yukawa, and together they predicted the existence of the neutral pi meson. Yukawa, also pictured above, was awarded the Nobel Prize in 1949 for his prediction of a meson (the pion) to mediate the strong and weak nuclear forces. The third person who is identified above, Robert Marshak, was also a particle physicist who worked on mesons. He also served as president of the American Physical Society, and president of the City College of New York. Coincidentally, he is credited with starting the Rochester Conference, also known as the International Conference on High Energy Physics, featured in one of the other images in this post. 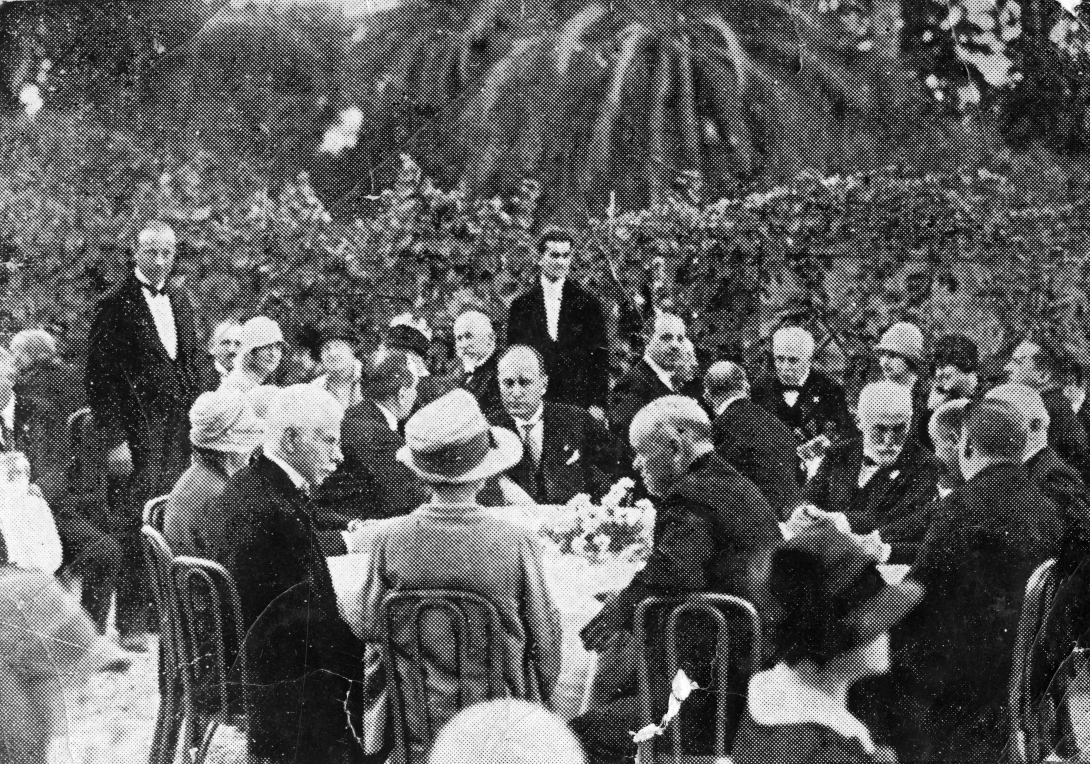 This outdoor tea party has a slightly different atmosphere from the previous two. Even though you can’t actually see the tea cups on the tables, the photograph is entitled “Tea with Mussolini,” and that’s good enough for me to include in this collection. (How could I not?) If the phrase sounds familiar, it’s because it’s also the title of a 1999 film about a group of American and British ex-pats living in Florence just before and during the Second World War.

The photo above was likely taken in 1927 at the first Volta Conference, which was attended by over 60 different physicists including 15 present or future Nobel Prize winners like Niels Bohr, James Franck, Max Planck, William Bragg, Ernest Rutherford, Max Born, etc., as well as Pieter Zeeman and Hendrick Lorentz shown above! The conference was named in honor of Alessandro Volta and held in Como, where Volta had lived most of his life. There are undoubtedly a number of interesting research topics waiting to be investigated here. A comparison of the Solvay and Volta Conferences anyone? 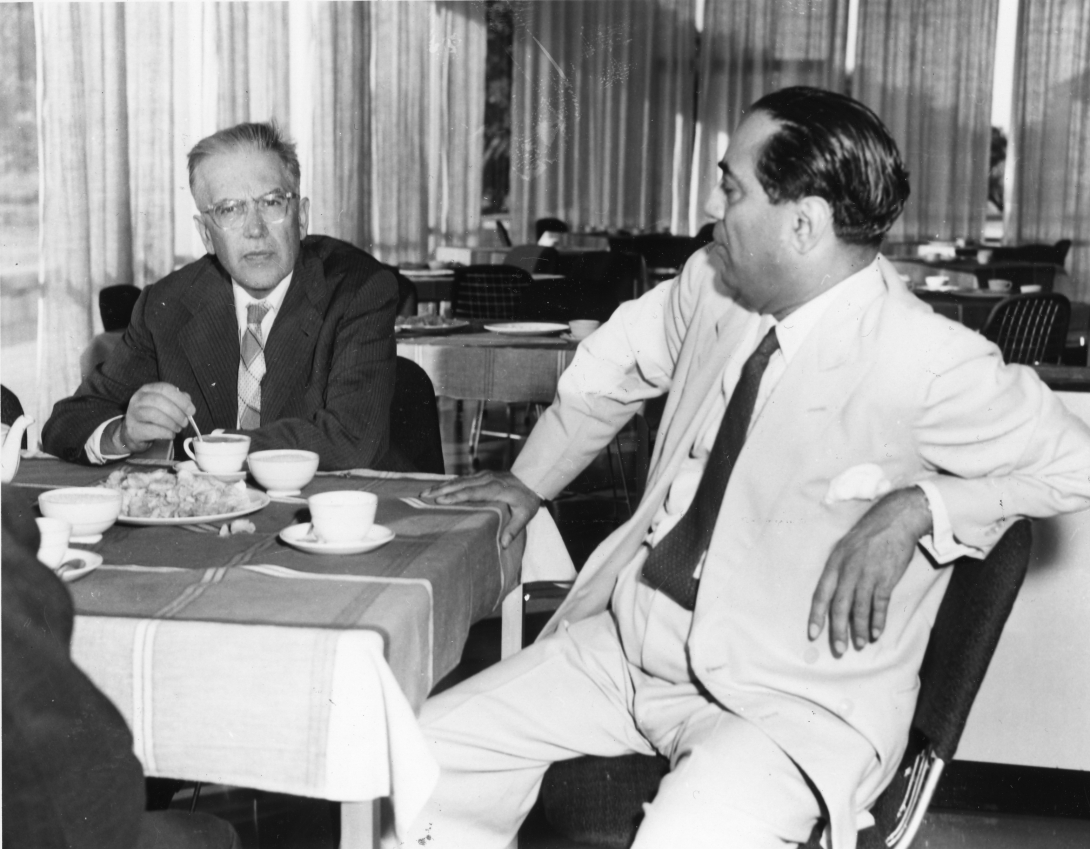 Next let’s move to India, where tea production and drinking has a long and storied history. But the photo above is just one snapshot of tea enjoyment where our photography archive’s namesake Emilio Segrè is sitting with Homi Bhabha, who has been called the “master builder of nuclear India.” At the time this photograph was taken, Segrè had been awarded his Nobel Prize and was working at the University of California, Berkeley. He was active in multiple professional capacities in nuclear and particle physics. This was no doubt a stimulating conversation then with Homi Bhabha, a nuclear physicist who founded and directed the Tata Institute of Fundamental Research (TIFR) and the Atomic Energy Establishment, Trombay (later renamed the Bhabha Atomic Research Centre). The TIFR had just opened in its new, permanent, location the previous year. In fact, on the same trip on which this photo was taken, Emilio Segrè gave a talk to the TIFR in the institute’s auditorium. Perhaps this photo was even taken at the TIFR cafeteria to relax after the talk?

Speaking of tea after talks … There is something about tea (or coffee) in standard cups with assorted pastries that look exactly like those above. It just screams “conference coffee break!” Maybe it’s also Robert Oppenheimer’s name tag that also lends this photo a definite conference atmosphere. I’ve looked but haven’t been able to find a copy of the interview shown above between Oppenheimer and Time Magazine. At the time of the interview, Oppenheimer had been stripped of his security clearance for three years. The U.S. Secretary of Energy recently nullified this 1954 decision by the Atomic Energy Commission. 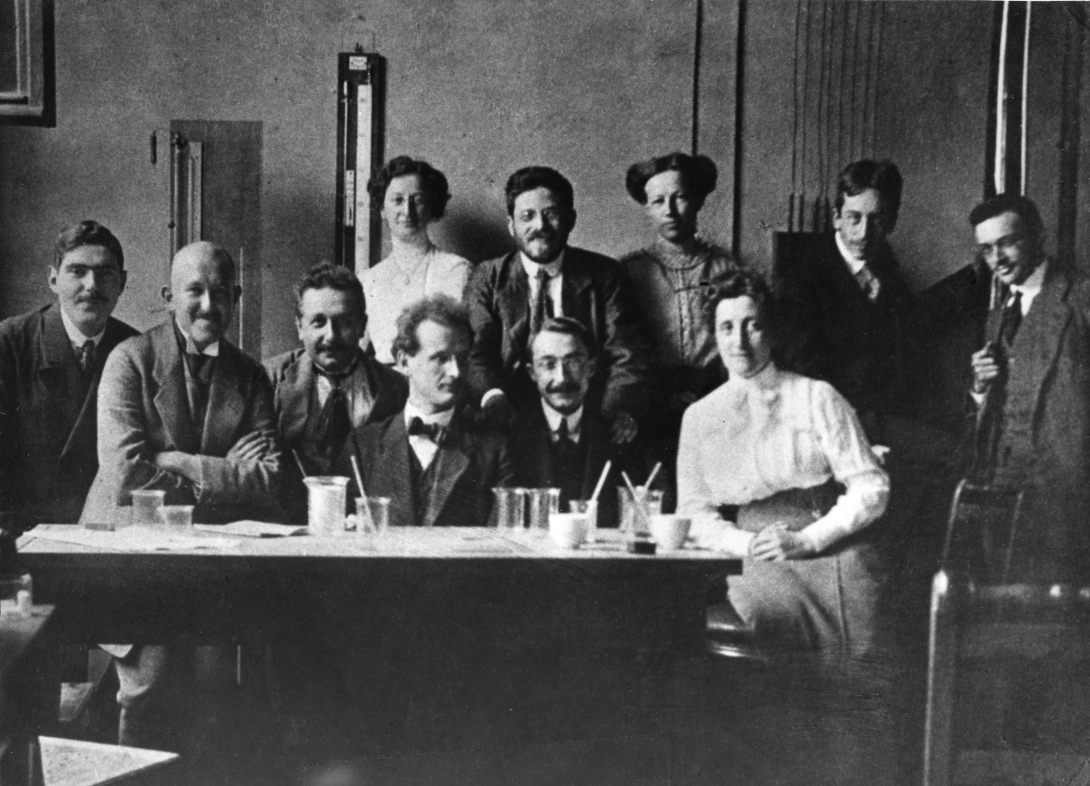 Tea is not only a celebratory beverage, it can also be the fuel for in-progress scientific research. (Or even inspire some research of its own!) First, I should note the obvious safety issue in taking tea in the laboratory (or really consuming any food or drink) amongst the laboratory equipment. Unless they ran out of cups, in which case a beaker could be a handy substitute? Second, I’m still working out the identities of all the individuals in this photo – there may be an upcoming blog post about this photograph specifically! – however, there are some recognizable individuals immediately apparent. On the far left is Karl Herzfeld, and in the back row, second from the left, is Paul Ehrenfest. And of course, in the front row third from the left is Albert Einstein. At least half of the people pictured are visitors to the lab in one way or another, so this was definitely a hopping place to be! 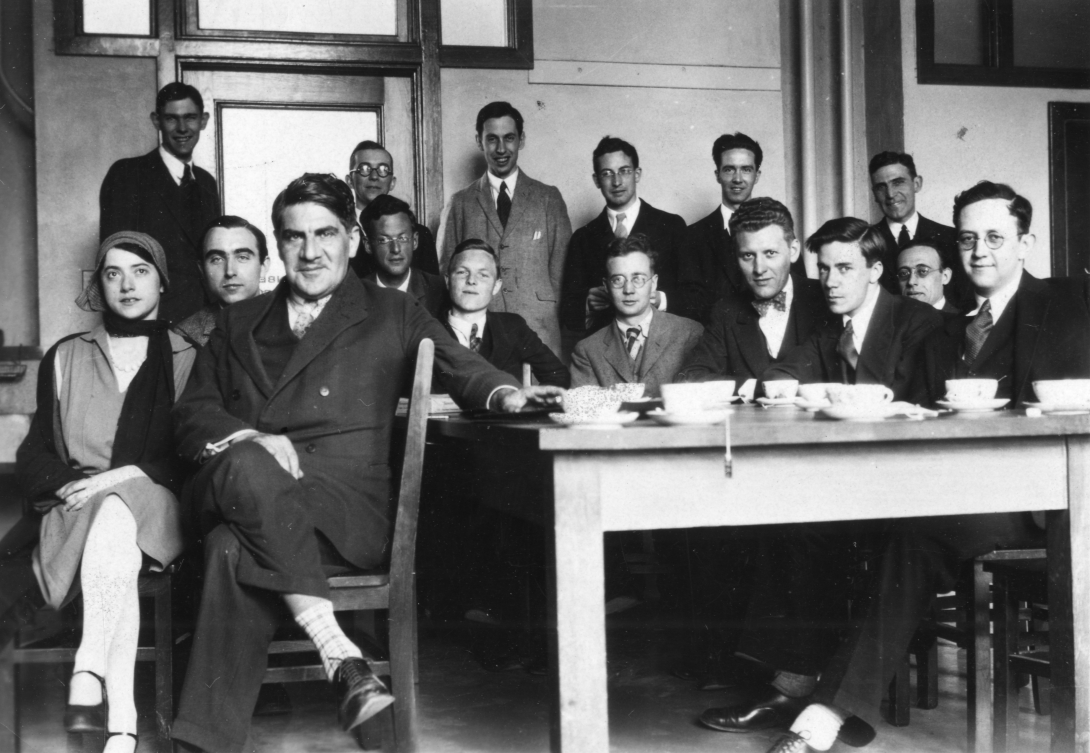 You can just make out tea bags on some of the saucers in this group photo from the University of Michigan. Michigan in the 1920s and 1930s was quite the incubator for quantum physics in the United States. The University was especially known for its summer symposia, which drew many young physicists together along with prominent thinkers every summer from 1928 until the start of the Second World War. In honor of these symposia, in 2010 the American Physical Society marked the University of Michigan as a Historic Site in the history of physics. For more on the history of the Symposia, you can also check out this three-part oral history interview with Harrison Randall, a long-time chair of the U. Michigan physics department.

An identification key for the University of Michigan E15 photograph. Credit: Joanna Behrman.

Identified in this photograph are:

A note on the identification key in the ESVA records remarks, “The group is the Theoretical Physics Colloquium which came together in Sam & George’s office on the third floor of the (then new) East Physics Building now called Randall Physics Building in Ann Arbor.” 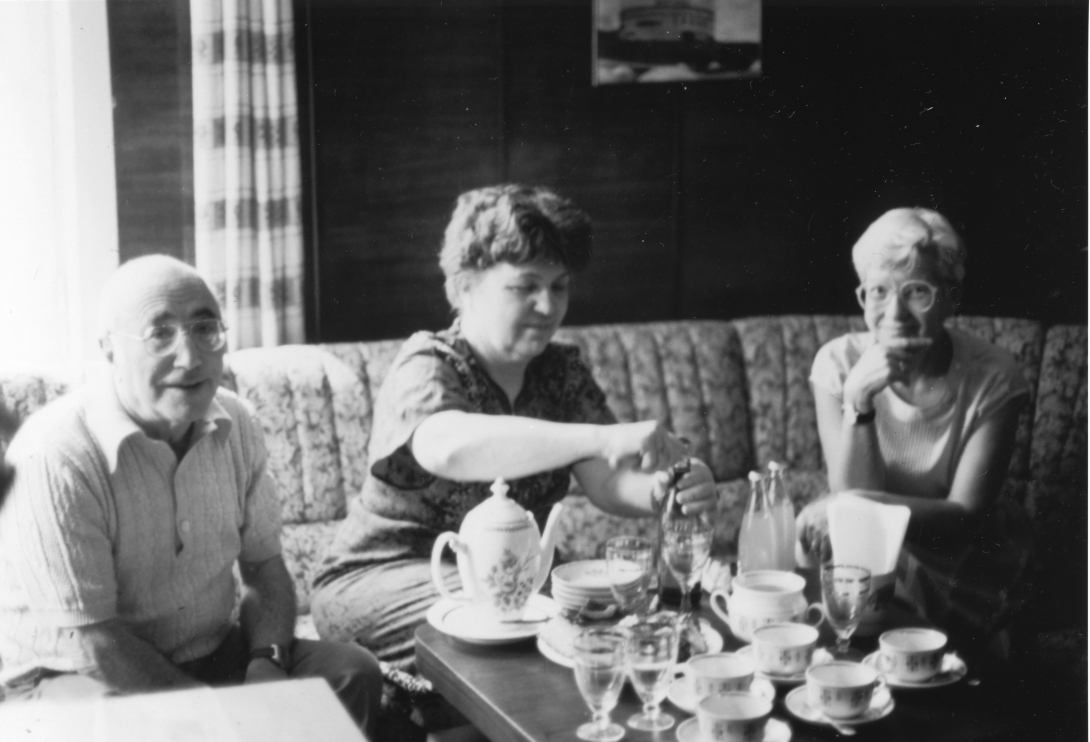 Finally, this photograph of a celebratory tea was taken in Moscow in 1983 on the occasion of Yakov Zeldovich’s winning the Catherine Wolfe Bruce Gold Medal of the Astronomical Society of the Pacific, which is awarded every year for outstanding lifetime contributions to astronomy. It certainly seems like a very cheerful tea party, and the fine tea set is a nice nod to the celebratory nature of the occasion.

Zeldovich worked in many different areas of physics, including chemical physics and nuclear and particle physics. He really got started in astrophysics when he was around 50 years old, but made many contributions to star formation, the cosmic microwave background, black holes, etc. It would be a bit easier to list what he didn’t work on.

About Vera Rubin much has already been written, so for more I recommend reading through one of her oral histories or a recent interview with one of her biographers.

And in the middle sits Alla Genrikhovna Masevich, a Soviet astronomer who worked as the Deputy Chairman for the Astronomical Council of the Soviet Academy of Sciences and frequently as an international spokesperson for Soviet astronomy. She also conducted research on the evolution of massive stars and was responsible for optically tracking Soviet satellites, beginning in 1957 with Sputnik 1.

Tea. This post was written with the help of multiple cups of tea – including mint, rooibos, ginger-lemon, and, of course, earl grey.