The House Science Committee plans to introduce a bill next month that would create a 10-year National Quantum Initiative aimed at increasing America’s strategic focus on quantum information science and technology development.

Convinced of the strategic importance of technologies enabled by quantum information science (QIS), the House Science Committee plans to introduce legislation next month to bolster U.S. quantum R&D. An aide for the committee’s Republican majority described the bill’s major provisions to FYI, while noting that details could change as the committee receives feedback from stakeholders on a discussion draft.

If enacted, the bill would launch a 10-year National Quantum Initiative and authorize specific activities at the Department of Energy, National Science Foundation, and National Institute of Standards and Technology — including new quantum R&D centers. However, funding for these efforts would have to be approved by Congress in separate appropriations legislation.

The White House Office of Science and Technology Policy’s top QIS official, NIST physicist Jacob Taylor, declined to comment on the draft legislation in an interview with FYI, but did offer his perspective on the state of the QIS field.

The Science Committee aide said a hearing the committee held last October demonstrated that quantum technology is of national importance and that U.S. R&D in the field lacks the strategic focus of recent efforts by China and Europe, remarking,

It became clear that we needed to have something that was a whole-of-government approach similar to what we had done previously for the High Performance Computing Act and then the National Nanotechnology Initiative.

Federal agency representatives at the hearing described the QIS field as being at an “inflection point,” with new technological applications on the horizon and investments by industry and other nations rapidly increasing. Although technologies have long leveraged quantum physics, QIS uses some of the most elusive quantum phenomena to enable powerful new methods for measuring, processing, and transmitting information. Some of these technologies remain speculative but could be especially disruptive, such as quantum computers powerful enough to break existing encryption codes. Others are closer to commercialization, such as new sensors for inertial navigation and mass detection.

The aide said that a “critical component” of the bill is its focus on creating a “true public-private partnership.” Referring to China’s plans to reportedly invest about $10 billion in quantum R&D, the aide added, “We’re never going to be able to meet that level — the federal government — but using the best and brightest minds in our industry and the work they’re already doing in quantum with the resources and knowledge of the federal government and our great academic research institutions, we think that we can maintain a leadership role in QIS.”

Asked if the committee has been able to verify the $10 billion figure, the aide said they had spoken with analysts who believe it is credible. Even if China’s true spending level turns out to be half that amount, the aide said, it would still represent a very significant investment. “We believe that China is heavily investing … and we can’t afford for them to develop a quantum computer that can crack all of our codes and encryption before we do.”

Acknowledging that computers with such capabilities may ultimately never materialize, the aide stressed that other, less speculative quantum technologies are important to U.S. economic leadership, saying, “Quantum sensors are actually here and functioning, and that could be a huge new industry.”

To manage the National Quantum Initiative, the bill would establish a national coordinating office, task the National Science and Technology Council (NSTC) with developing strategic plans for federal agencies, and create an advisory committee of external stakeholder representatives.

At the agency level, the bill would authorize DOE to establish several QIS R&D centers, each of which would be a “testbed” for different types of quantum technology, such as sensing, communications, and computing. The aide acknowledged this provision was “heavily influenced” by a proposal from the National Photonics Initiative, an advocacy group led by scientific societies, and said the authorizing language is similar to that used for DOE’s Nanoscale Science Research Centers and Bioenergy Research Centers.

For NSF, the bill would authorize the agency to create centers that are focused on academic research and longer-term workforce development, drawing on the model of the agency’s current Engineering Research Centers. The aide said the committee is still “fleshing out” the NIST provisions, noting that input to the committee indicated the QIS field is not yet ready for standards development.

Beyond DOE, NSF, and NIST, various agencies within the Department of Defense also actively support QIS research. The committee does not have jurisdiction over DOD, although the aide said the committee does want to encourage communication between the civilian and military quantum research communities.

As for potential hurdles to passing the bill, the aide said that getting support for funding authorizations could be a challenge and acknowledged that the counterpart committee in the Senate so far does not seem to share the same level of “urgency or enthusiasm.” However, the aide said the majority is optimistic that committee Democrats will sign onto the bill given that the drafting process has been bipartisan and said the Trump administration’s prioritization of QIS could help provide momentum. 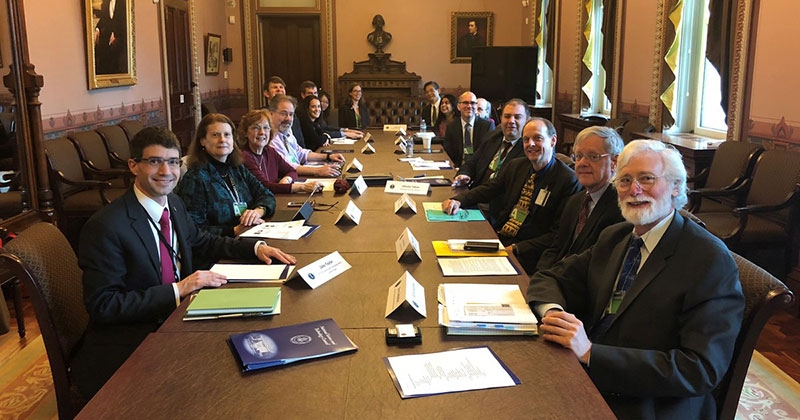 The National Science and Technology Council’s Subcommittee on Quantum Information Science held its first meeting on April 27. The House’s draft quantum bill would task this group with developing two five-year strategic plans that establish goals and metrics for a National Quantum Initiative.

Jacob Taylor joined OSTP in December to serve a two-year term as its first-ever assistant director for quantum information science, while continuing to work part-time at NIST’s Joint Quantum Institute. OSTP has since created a new NSTC subcommittee focused on QIS, which held its first meeting last month.

Taylor emphasized that the federal government has long-standing interests and investments in QIS. A previous NSTC QIS subcommittee issued a “Federal Vision for Quantum Information Science” at the end of the George W. Bush administration, and a subsequent NSTC interagency working group created during the Obama administration issued a report in 2016 that identified existing federal QIS programs and impediments to advancing the field. Taylor said OSTP decided to elevate the Obama-era working group to the level of a formal NSTC subcommittee because the need for coordination has increased.

Taylor explained that the goal of the QIS subcommittee is to build mutual understanding among federal agencies and determine how agency-level efforts could translate to “whole-of-government” efforts. He declined to comment specifically on what the subcommittee discussed in its first meeting, but did offer his personal views on the promise of QIS.

“From my perspective, what we see is that there is a tremendous amount of fundamental science still to be done,” Taylor said. Stressing the nascent nature of the field, he added,

If you just think of this as a technological field that’s ripe for that type of development, I think that at the present time we see that as a bit early. There is technology to be done, for sure, but it’s a little bit like trying to predict the emergence of the Global Positioning System right after you invented the atomic clock.

Asked if he is worried about QIS being overhyped, Taylor replied, “I am of course concerned about deep investment when the knowledge is not there, and that’s not unique to this field.” He continued, “When we talk about dispelling hype, what we’re really talking about is getting more knowledge out there about what the opportunity space looks like so that entrepreneurs and investors can make smart decisions.”

According to the 2016 NSTC report, the federal government was spending about $200 million per year on basic and applied research in QIS at that time. NSF and the DOE Office of Science are among the agencies that have since sought to increase their QIS spending. In their budget proposals for fiscal year 2019, NSF requested $30 million for a new “Quantum Leap” initiative and the Office of Science requested $105 million for QIS across five of its six major program areas. The office also allocated a portion of the large budget increase it received in fiscal year 2018 to QIS, as shown in the table below.

Reports from workshops convened by the Office of Science to guide its investments are an indicator of the interest in QIS within these disciplinary communities. For instance, a workshop report published this March on potential applications of quantum sensors in high energy physics expresses confidence that a quantum sensor initiative could enable a “new style” of experiments that do not rely on large particle accelerators and “dramatically reshape” a significant portion of the field.