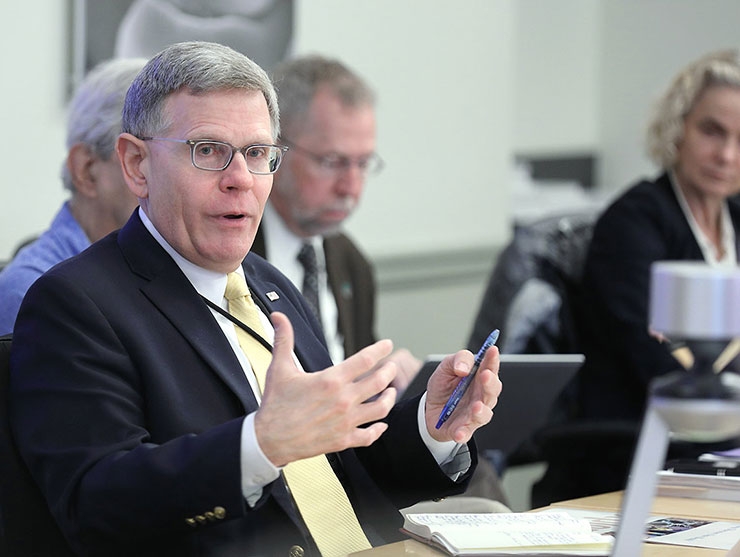 OSTP Director Kelvin Droegemeier during a visit to the National Institutes of Health in April.

The White House issued its annual R&D priorities memorandum to the heads of federal science agencies on Aug. 30, offering them guidance as they prepare their budget request submissions for fiscal year 2021. The memo lays out five overarching “budgetary priorities,” spanning defense and civilian research, as well as five “high-priority crosscutting actions,” which include developing the future STEM workforce and better leveraging federal datasets.

Many of the priorities restate or elaborate on ones articulated in last year’s memo. For instance, it again promotes R&D underpinning “Industries of the Future,” such as artificial intelligence and quantum information science. It also retains language favoring “early-stage” energy research over later-stage technology development, and adds a new emphasis on nuclear energy R&D, including work on advanced reactor technologies and the proposed Versatile Test Reactor user facility. Several entirely new priorities are included, such as research relating to “Earth system predictability,” ocean exploration, critical minerals, high-risk high-reward research, and research integrity.

Following tradition, the memo is co-signed by the heads of the Office of Science and Technology Policy and the Office of Management and Budget, which is responsible for assembling the president’s budget request for submission to Congress in February each year. However, this is the first memo the White House has issued since Kelvin Droegemeier’s confirmation as OSTP director.

Droegemeier’s influence is discernable throughout the document, particularly in its emphasis that the U.S. research enterprise should uphold “American values,” which are defined as encompassing “free inquiry, competition, openness, and fairness.” The memo also incorporates the priorities of the newly established Joint Committee on Research Environments (JCORE), an interagency panel focused on topics such as combatting sexual harassment, reducing administrative burdens on researchers, and securing research assets from undue influence or misappropriation by foreign governments.

The document also elaborates on Droegemeier’s conception of the enterprise as having entered a “Second Bold Era,” which it states is characterized by not only its unprecedented opportunities, but also “new and extraordinary threats which must be confronted thoughtfully and effectively.” Alluding to the tensions within the research community over current research security initiatives, it states, “[Success] will depend upon striking a balance between the openness of our research ecosystem and the protection of our ideas and research outcomes.”

Speaking to FYI, Droegemeier stressed that the work of JCORE is a top priority for OSTP and federal science agencies, saying that its Research Security Subcommittee, for instance, has met seven times since the panel was established in May and that “actionable” outcomes are forthcoming. “It's all hands on deck,” he said.

He also emphasized the continuity with the previous memo and warned against overinterpreting changes to the wording. Asked about how language favoring “early-stage” research is now only found in the energy section of the memo rather than applied more broadly across fields, he indicated it does not reflect a shift in the administration’s thinking. “It's hopefully self-evident to people that the basic research is very, very critical,” he said.

Agencies to probe limits of predictability

Droegemeier highlighted the new section on Earth system prediction as a notable addition to the memo. It declares, “Knowing the extent to which components of the Earth system are practicably predictable — from individual thunderstorms to long-term global change — is vitally important for physical understanding of the Earth system, assessing the value of prediction results, guiding federal investments, developing effective policy, and improving predictive skill.”

“Departments and agencies should prioritize R&D that helps quantify Earth system predictability across multiple phenomena, time, and space scales,” it continues. “Additionally, agencies should emphasize how measures of and limits to predictability, both theoretical and actual, can inform a wide array of stakeholders.”

Droegemeier, who is an expert on extreme weather, noted that such research could inform how to allocate resources to different aspects of hurricane forecasting. “There's been massive improvements in track forecasting over the last couple of decades. And the question then becomes, if we're really pretty close to hitting some fundamental limit of predictability in track forecasting, do we want to continue investing a lot of resources in that or should we direct them somewhere else, to some other aspect of hurricanes or whatever else?” he said.

Asked for an analogous example for climate modeling, he spoke instead in general terms.

“Everything has some inherent limit of predictability, whether you're talking about being able to forecast the stock market or being able to forecast an individual's life expectancy, their health, educational attainment,” he said. “Unfortunately, in a lot of cases, we sort of talk about predictive analytics and prediction, and so on, I think rather loosely, without really understanding what inherent limits of predictability might exist.”

Returning to the hurricane forecasting example, he added,

When you get to larger scales, where you're not doing prediction, but you're doing projection, that becomes a bit of a question of terminology. But those are exactly the kinds of things I think we need to look at. But ultimately, it comes down to how much can we trust the information that we're putting out.

Droegemeier also drew attention to a new section of the memo that calls on agencies to prioritize “transformative research of high risk and potentially high reward.”

“It's very, very important that we not just study the safe problems and only fund the research that we know is going to be successful, but we really take intellectual risks. And I really want to emphasize that word ‘intellectual’ — we're not talking about risking lives or anything like that,” he said, adding,

We’ve got to be comfortable with failure on some of these big bets that we make. And I think, frankly, we've gotten away from that as a country.

He attributed the shift away from such research in part to budgetary pressures. “When budgets are tight and funding is tight and success rates are relatively low … if you're a reviewer of [grant] proposals, you want to make sure that you're making a recommendation to the agency that the projects will be successful,” he said.

Asked about the tension between the desire to increase support for high-risk, high reward research and the administration’s past proposals to sharply reduce federal support for science, he said, “The key thing there is to have conversations about what the priorities are. Obviously, you would like to be able to do lots and lots and lots of things, and you can't do everything.”