The budgets for the Department of Energy’s applied R&D offices are all increasing in fiscal year 2020, in most cases by large amounts. The increases include new funding for negative emissions technologies and a major advanced nuclear reactor demonstration program.

Many of the Department of Energy’s applied energy R&D programs are receiving large budget increases following the enactment of fiscal year 2020 appropriations in December. Notably, the Advanced Research Projects Agency–Energy is receiving another year of record-level funding and the budget for the Office of Energy Efficiency and Renewable Energy is growing by 20%. Congress is also supporting new programs, including one that will fund demonstrations of advanced nuclear reactor designs and another that will invest in technologies that remove carbon dioxide from the atmosphere.

This year’s sizeable increases reflect a conjunction of interests between House appropriators who proposed boosts for certain R&D programs and Senate appropriators who pushed to increase energy R&D funding more broadly. Sen. Lamar Alexander (R-TN), the Senate’s lead appropriator for DOE, said a year ago he would like energy R&D spending to double over five years. However, his influence over the matter will last for only one more budget cycle as he is retiring after the November election.

Once again, Congress’ funding increases for energy R&D arrive in the face of Trump administration proposals for dramatic cuts to most of these programs. Congress preempts the administration from paring back the scope of DOE’s energy R&D portfolio, directing DOE to expend appropriated funds in a timely manner and support energy R&D projects at all stages up through commercial implementation. 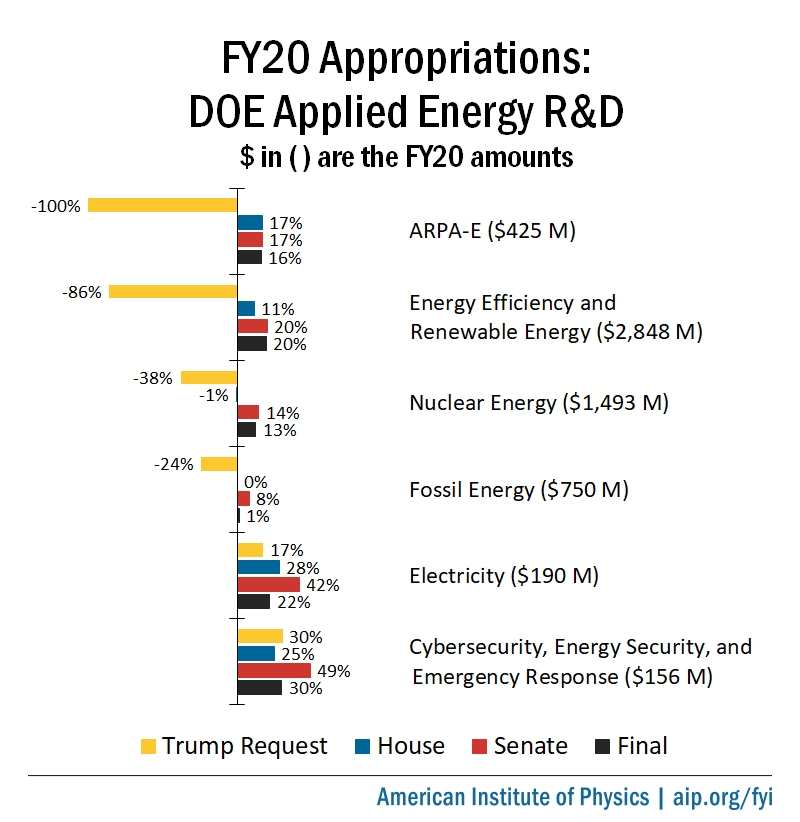 This year’s DOE appropriation was included in a package bill. An explanatory statement accompanying it provides detailed funding direction and policy guidance on select issues. The House and Senate reports on their respective DOE spending bills convey additional direction unless the language is negated in the statement. For summary tables, see the FYI Federal Science Budget Tracker.

Although the Trump administration has sought to shutter the agency, claiming its work is better left to private industry, Congress has instead focused on building it up. Supporters of the agency argue it plays a unique role in the energy innovation system, employing a program direction model that empowers its officers to strategically select and support projects through a critical stage in their development.

This year’s funding level is near the amount recommended in a bipartisan ARPA–E policy bill pending in both the House and Senate. The bill envisions the increase as the first step in a five year ramp up to $750 million. A bill introduced this week by House Science Committee Republicans recommends that the ARPA–E budget increase to $1 billion by fiscal year 2029.

This year’s appropriation legislation enacts the Senate’s proposal to restructure the DOE Office of Nuclear Energy’s budget to place a new emphasis on advanced reactor development. It also boosts the office’s budget by 13% to $1.5 billion, which is more than 60% above where it stood five years ago.

Advanced reactor demonstrations. Congress is providing $230 million for a new advanced reactor demonstration program, directing DOE to “streamline its procurement process and act aggressively” to implement the program and to “focus government and industry resources on actual construction of real demonstration reactors that are safe and affordable (to build and operate) in the near and mid-term.” The program, which the Senate had proposed funding at $300 million, is effectively the same as the one called for in the still-pending Nuclear Energy Leadership Act.

In establishing the program, DOE is directed to request proposals from industry and evaluate them based on technical feasibility, safety, affordability, and their potential for cost-sharing. Within the program, $160 million is allocated for the first year of two demonstration projects, which are required to cover at least 50% of costs using nonfederal sources. An additional $30 million will support technical risk reduction R&D for between two and five proposals that are not selected for demonstrations. Another $15 million will go to DOE national labs for work with the Nuclear Regulatory Commission to identify and resolve technical challenges associated with advanced reactor licensing, and $5 million will go to evaluating safeguard issues unique to advanced reactors.

Used nuclear fuel disposition. DOE is directed to initiate a National Academies study on the waste products of advanced reactors. The study will assess the nature of the waste streams related to proposed reactor technologies, address unique disposal or storage requirements for these wastes, and examine the economics of potential disposal systems. The study is barred from offering “non-technical value judgements” in its consideration of different policy options.

Versatile Test Reactor. Funding for the proposed Versatile Test Reactor facility will remain level at $65 million, though DOE had requested an increase to $100 million. The Nuclear Energy Innovation Capabilities Act directs DOE to construct the facility, but Senate appropriators have expressed concern about its “cost, schedule, and prioritization.” Accordingly, the explanatory statement instructs DOE not to expend any funds on the project except for work on the conceptual design and initial cost range estimate. DOE has projected that the facility could cost between $3 billion and $6 billion and is planning to build it at either Idaho National Lab or Oak Ridge National Lab. 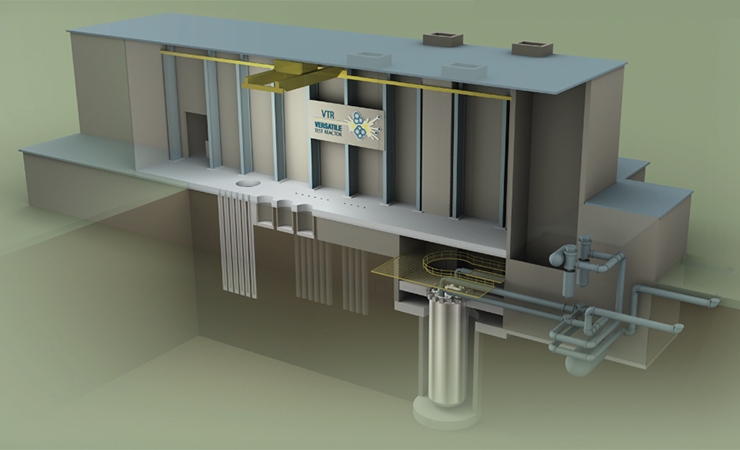 A conceptual illustration of the proposed Versatile Test Reactor user facility, which would provide a U.S.-based capability for testing materials and fuels intended for use in certain kinds of advanced nuclear reactors.

High-assay low-enriched uranium. HALEU is uranium fuel enriched to contain between 5% and 20% of the highly fissile uranium-235 isotope by weight and is required by several proposed advanced reactor designs. To redress the lack of a domestic supply for it, DOE has already contracted with a company to demonstrate production capability through uranium enrichment. Congress meets DOE’s request for $40 million for the enrichment program and specifies at least $8 million for another program to fabricate HALEU from feedstock recovered from Experimental Breeder Reactor II, a decommissioned facility at Idaho National Lab.

Congress also directs DOE to establish a “team of experts” drawn from the national labs and industry to assess options for meeting future demand for HALEU. There are concerns that widespread HALEU availability carries the risk of its theft for use in a nuclear weapon. To address issues related to shipping HALEU, Congress directs DOE to contract with a “company experienced in shipping nuclear materials to identify key challenges.”

The Office of Energy Efficiency and Renewable Energy funds a wide variety of R&D programs as well as initiatives to promote energy efficiency in homes, buildings, and industry. Its budget is increasing 20% to $2.85 billion and has now increased by nearly 50% over the last five years. 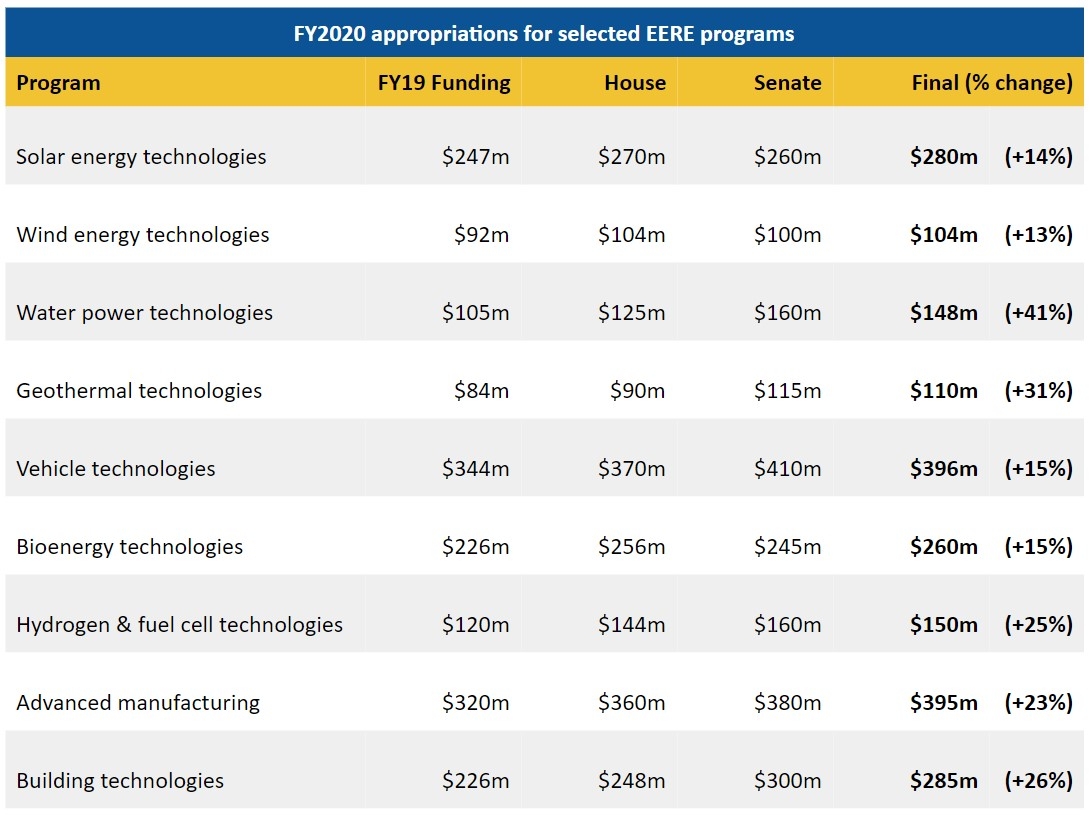 Solar energy. Within the $280 million Congress is providing for DOE’s solar energy program, the department is directed to allocate $20 million to each of two funding opportunity announcements. The first is for proposals to improve photovoltaic cell technologies, “including thin-film solar cell technologies and cadmium telluride solar cell technologies, and to overcome grid integration challenges and reduce the costs of solar adoption.” The second is for research on perovskites, including “inherently scalable production methods such as solution processing, roll-to-roll manufacturing, the science of inherent material stability, and ultrahigh efficiency through tandem manufacturing.”

Wave energy. Within the substantial increase provided for water power, Congress specifies $26 million for an “open-water wave energy test facility,” a reference to the PacWave facility that is set to be built off the Oregon coast. DOE is also directed to spend at least $5 million to establish an “Atlantic Marine Energy Center, a new regional design and testing center on the eastern U.S. coast as a resource for technology developers to accelerate the transition of wave and tidal energy technologies to market.”

Geothermal energy. Within the increase for geothermal energy, Congress is providing $20 million for the Frontier Observatory for Research in Geothermal Energy (FORGE), a project to test and evaluate enhanced geothermal systems that is currently underway at a site in Utah. Congress has already provided the project with enough funding to see the project through its anticipated five year period of operations. DOE therefore only requested $5 million for the site’s eventual closure, but policy legislation pending in Congress indicates there is interest in both the House and Senate in expanding the project to at least one additional site. 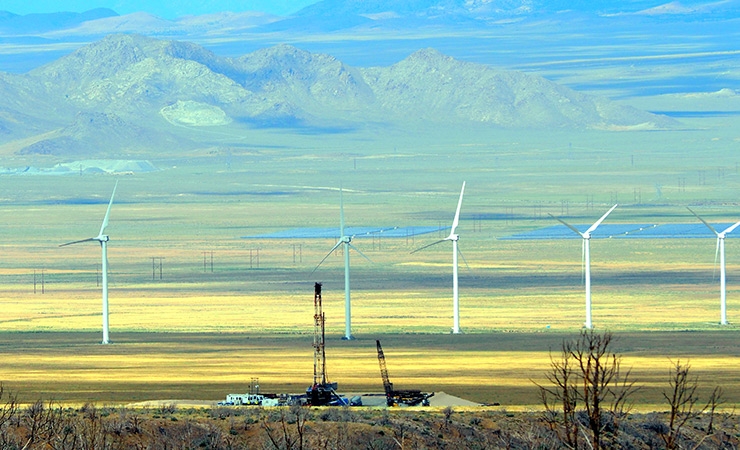 The Utah FORGE site is located in the state's Milford Renewable Energy Corridor.

Advanced manufacturing. Within the $395 million provided for advanced manufacturing, a $75 million increase, Congress provides $25 million for ongoing funding of the Energy-Water Desalination Hub that DOE awarded in September to a research consortium led by Lawrence Berkeley National Lab.

Program staffing and management. The House and Senate reports both expressed concern that EERE staffing levels have declined since the beginning of the Trump administration even as Congress has increased the office’s budget. The explanatory statement directs DOE to develop a plan to increase staffing to between 675 and 700 full-time equivalents by the end of the current fiscal year. The House Science Committee is holding a hearing on “management and spending challenges” within the office next week.

The budget for the Office of Fossil Energy’s R&D programs is increasing by 1% to $750 million. Congress also directs DOE to recommend new program structures to support the development of R&D efforts in decarbonization of the industrial sector, direct air capture, and carbon utilization. Policy bills pending in the House and Senate seek to substantially increase the office’s focus on carbon reduction technologies.

Recovery of rare earths. Funding for technologies to recover rare earth elements and minerals from coal and coal byproduct sources is increasing from $18 million to at least $23 million.

Funding for the Office of Electricity is increasing 22% to $190 million.

Grid-scale energy storage. The budget for the office’s grid-scale energy storage program is increasing from $46 million to $56 million. Within that increase, Congress is providing $1 million of the $5 million requested by DOE for early work on a “Grid Storage Launchpad,” which will consolidate materials R&D and testing efforts into a single facility at Pacific Northwest National Lab.

The budget for DOE's CESER office is increasing 30% to $156 million, primarily reflecting the recent prioritization of grid cybersecurity.

EMP and geomagnetic disturbances. The explanatory statement does not elaborate on House and Senate report language questioning DOE’s request for $30 million to establish a “national physical energy system and component testing capability” that would be used to assess the U.S. electric grid’s vulnerabilities to electromagnetic pulses and geomagnetic disturbances. The House report directs DOE to report back to Congress on its rationale for establishing such a facility and to provide an inventory of existing capabilities that could serve that function.