The House proposes mostly flat funding for the Department of Energy’s applied R&D programs for fiscal year 2021, though it would provide additional funds through an expansive “emergency” economic stimulus package. The Senate has not released its proposals.

This summer, the House passed legislation that would provide mostly level funding for the Department of Energy’s applied R&D programs in fiscal year 2021. The Senate has not released its counterpart legislation, and with lawmakers now moving to negotiate a final spending bill, it is possible its proposals may never become public.

Sen. Lamar Alexander (R-TN), the Senate’s lead appropriator for DOE, did say in early spring that he objected to the Trump administration’s aggressive proposals for cuts and would continue pressing for a major expansion in the department’s budget. For their part, House Democrats have also proposed providing DOE with one-time “emergency” economic stimulus totaling $23.5 billion, which they appended to their bill over Republican objections. Much of the funding would go to renewable energy R&D, carbon reduction technology, advanced nuclear reactors, and grid modernization.

The House and Senate have also advanced sweeping energy policy bills, with the House’s recommending significant long-term funding increases for renewable energy, fission and fusion energy, and carbon capture. If enacted, those recommendations would be non-binding targets for appropriators to consider in their future spending bills.

The House’s fiscal year 2021 spending proposals are detailed in both their bill and the accompanying committee report, and their non-emergency proposals are summarized in the chart below. Detailed figures are available in the FYI Federal Science Budget Tracker. 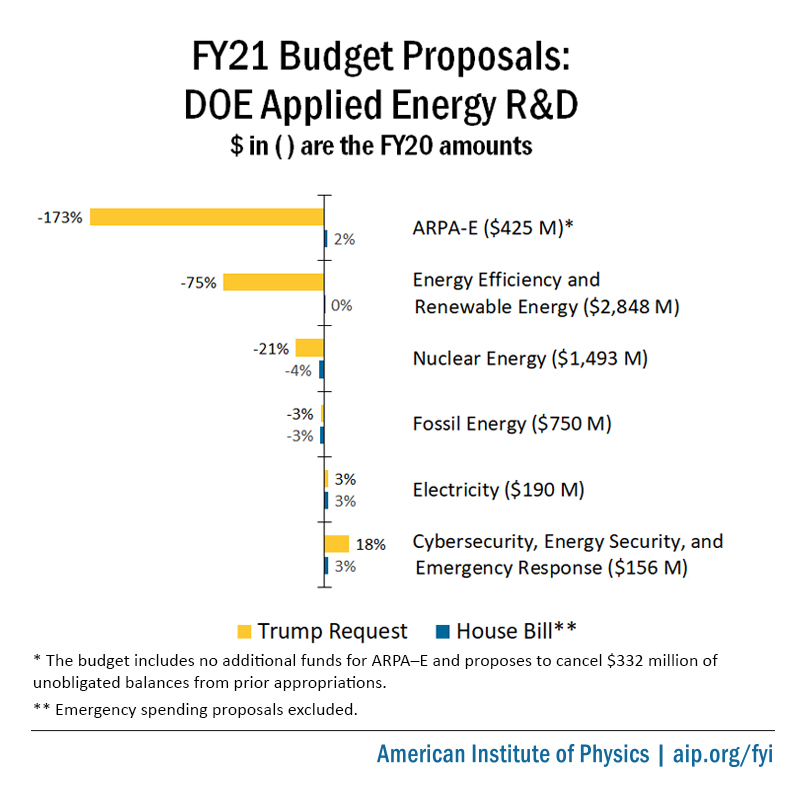 For a fourth year in a row, the House rejects the administration’s proposal to terminate ARPA-E and instead proposes increasing its budget by $10 million to $435 million and providing $250 million in emergency funding. The House’s energy policy bill recommends increasing the agency’s budget to $875 million by fiscal year 2025, while the Senate bill recommends an increase to $750 million over the same period.

The House proposes flat funding of $2.85 billion for the Office of Energy Efficiency and Renewable Energy, following a long trend of increases. In addition, the emergency spending proposal would provide $7.78 billion, the bulk of which would go toward weatherization and energy efficiency subsidies, with $1 billion of the remainder directed to electric vehicle infrastructure, $500 million to advanced manufacturing activities, and $100 million for hydrogen and fuel cell technology projects. 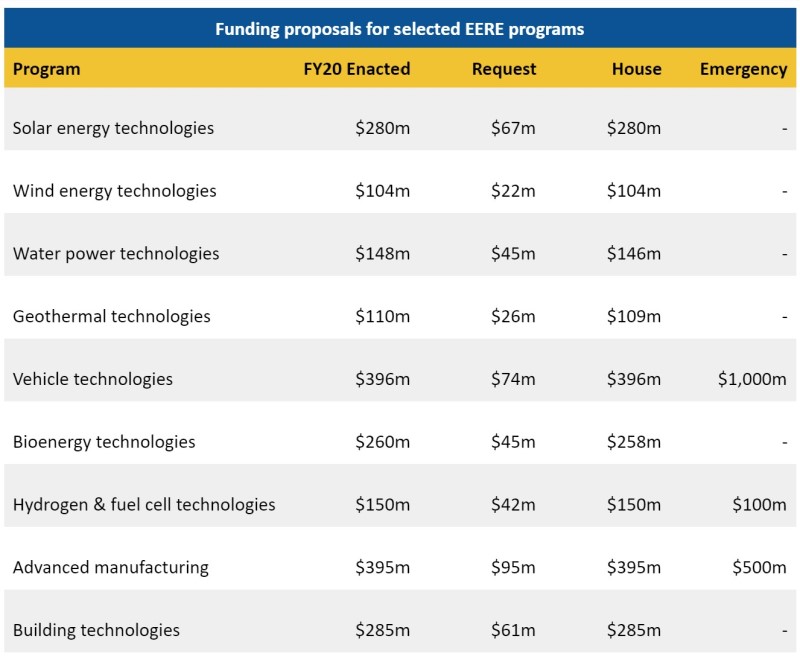 Water power. The House would provide $146 million for water power R&D, a slight decrease from fiscal year 2020. Of the total, at least $98 million is allocated for marine and hydrokinetic research, supporting an “emerging focus on bringing marine energy to meet near-term opportunities in the blue economy, thereby accelerating marine energy grid readiness.” The report specifies that $40 million should fund a “balanced portfolio of competitive solicitations” for industry-led and university-led marine energy technology projects. It expresses concern that uncertainty surrounding the frequency of awards and access to them has a “unique effect on university capacity to drive needed foundational research and develop the skilled workforce to accelerate marine energy commercialization efforts.” The report also recommends spending up to $10 million to address infrastructure needs at marine energy technology testing sites, and it expresses an interest in ocean thermal energy conversion and sea water air conditioning systems, requesting a report on DOE projects supporting them.

Geothermal energy. Funding for geothermal technology R&D would also decrease slightly under the House proposal to $109 million, with steady funding of up to $20 million specified for the Frontier Observatory for Research in Geothermal Energy, a test site in Utah for enhanced geothermal systems technologies. The bipartisan Advanced Geothermal Research and Development Act, which the House passed as part of its energy bill, recommends ramping the overall budget for geothermal energy up to $228 million by fiscal year 2025 and establishing a total of up to three FORGE sites.

Solar and wind energy. The House proposes flat funding for the solar and wind energy R&D programs. Within the $280 million solar energy budget, $20 million is specified for a competitive solicitation on perovskite research focused on “manufacturing, durability, sustainability, and reducing market barriers, development costs, and technology risks.” Within the $104 million wind energy budget, $5 million is provided to establish a new multi-institution “center of excellence” focused on offshore wind energy deployment and operations. The House’s energy policy bill recommends roughly doubling funding for both the solar and wind programs over the next five years. 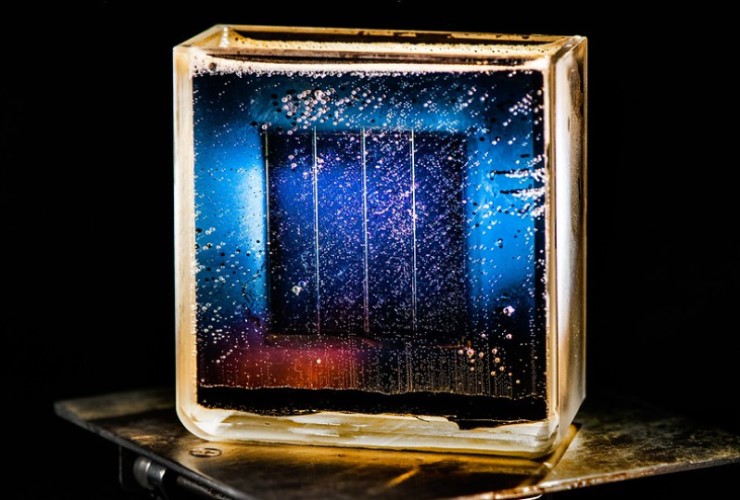 A hybrid perovskite solar cell developed by the National Renewable Energy Laboratory that can be used to make hydrogen, a storable solar fuel.

The House would provide $1.44 billion for the Office of Nuclear Energy, a 4% decrease from fiscal year 2020, though it proposes $1.25 billion in emergency funding as well.

Advanced reactor demonstrations. The House proposes to increase funding for the Advanced Reactor Demonstration program by $10 million to $240 million and provide an additional $700 million in emergency appropriations. The program was created through the initiative of Senate appropriators, who included its initial funding in Congress’ fiscal year 2020 spending legislation. It is also backed in the pending House and Senate energy policy bills, with the House bill recommending that Congress provide it with $530 million in fiscal year 2021 and $680 million annually over the following four years. DOE recently awarded $160 million to support the first year of cost-sharing agreements for two demonstration projects and expects to spend about $3.2 billion on them over seven years, if Congress makes the funding available.

Versatile Test Reactor. The House proposes flat funding of $65 million for the Versatile Test Reactor, denying DOE’s request to ramp its budget up to $295 million. The facility would provide a U.S.-based capability for irradiating fuels, components, and materials intended for use in certain advanced reactor designs with the high-energy neutrons the reactors would employ. DOE recently approved the project’s conceptual design and established a preliminary cost range of $2.6 billion to $5.8 billion, and the House energy policy bill recommends ramping up its annual funding to $765 million by fiscal year 2024, ahead of a completion date mid-decade. However, last year Senate appropriators expressed reservations about the project’s costs and whether its prioritization has been adequately justified.

Transformational Challenge Reactor. The House proposes to zero out funding for the Transformational Challenge Reactor, a project to demonstrate capabilities for building a micro-reactor using additive manufacturing techniques. DOE had sought an increase in the project’s budget from $23 million to $30 million, and Sen. Lamar Alexander (R-TN), the Senate’s outgoing lead appropriator for DOE, has showcased the project, which is based at Oak Ridge National Lab in his state.

Small modular reactors. The House proposes to boost the Advanced Small Reactor program budget by $5 million to $105 million and provide it with $192 million in emergency funds. The administration requested a $10 million cut to the program, arguing it should narrow its scope to early stage R&D and avoid duplicating efforts funded through other programs.

The House would provide $728 million for the Office of Fossil Energy, a 3% cut from fiscal year 2020 and slightly less than the administration’s request. It also proposes $1.25 billion in emergency funding focused mostly on carbon reduction technologies. Within the topline, the House proposes a stronger focus on carbon removal efforts than the administration, and it rejects a proposed restructuring of the office’s Advanced Energy Systems and Carbon Capture, Utilization, and Storage (CCUS) programs.

CCUS. The House would provide a combined total of $276 million for CCUS programs, a $58 million increase. The administration proposed rolling the three efforts into a single budget line item for which it requested $123 million. In addition, the House’s emergency appropriation would provide $750 million for a carbon capture and utilization technology commercialization program. The House energy policy bill recommends ramping up funding for CCUS programs to more than $1 billion by fiscal year 2025 and launching a separate commercial demonstration program funded at $1.5 billion annually.

Coal FIRST. The administration seeks to increase funding from $34 million to $217 million for the Transformative Power Generation program, which it proposes to rename as Power Generation Efficiency. The increase would largely support DOE's “flagship” Coal FIRST initiative, but the House proposes to allocate only up to $15 million to the initiative. According to DOE, the initiative aims to develop coal plants that would operate with higher efficiency and produce zero or near-zero emissions.

Grid Storage Launchpad. The House would provide $16 million for the construction of a Grid Storage Launchpad facility, with an additional $56 million proposed as emergency funding. DOE had requested $40 million for the facility this year and estimates its total cost will be between $57 million and $77 million. To be built at Pacific Northwest National Lab, the facility is intended to modernize and expand research capabilities for the development, testing, and independent validation of materials and systems for grid-scale batteries.