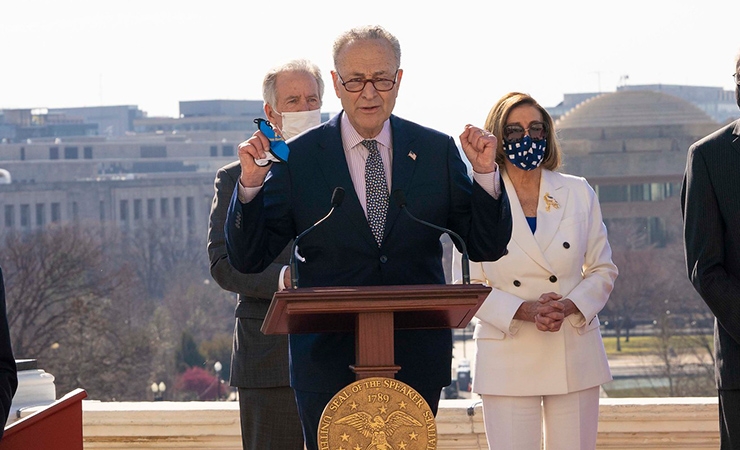 Having successfully enacted $1.9 trillion in pandemic relief spending, congressional Democrats and the Biden administration are developing a follow-on agenda that will include a major focus on infrastructure, manufacturing, and R&D.

The push’s infrastructure component could cost about $2 trillion if it tracks President Biden’s campaign promises, and it is expected to include a focus on mitigating carbon emissions. Although few concrete details about the package have surfaced, Democrats expect Republican opposition and are gearing up to advance it through the same budget reconciliation mechanism they used to pass the pandemic bill.

Before that effort moves ahead, Senate Majority Leader Chuck Schumer (D-NY) is planning to incorporate his Endless Frontier Act, which focuses on advancing select technologies, into a package aimed at bolstering U.S. competitiveness in its rivalry with China. Media reports suggest that Democrats view the issue as an opportunity to test the climate for bipartisan legislating, with Sen. Todd Young (R-IN) heading up work on the Republican side. Senate committees are expected to advance components of the package as early as next month.

With the Endless Frontier Act apparently on a fast track, research community leaders are organizing to influence its provisions. The bill has not been introduced in the current Congress, but last year’s version proposed major changes in the National Science Foundation’s structure and called for adding $100 billion to its budget spread over five years. Last week, all the agency’s living former directors endorsed the “spirit” of the original bill in a letter to Schumer and Minority Leader Mitch McConnell (R-KY). They have told FYI they are discussing their views with staff members from Schumer’s and Young’s offices this week.

Congress starting to put pieces on the table

Congressional committees have already put forward major legislative proposals that could feed into the infrastructure and competitiveness packages. For example, Democrats on the House Energy and Commerce Committee have reintroduced and updated their CLEAN Future Act, which, among its many other measures, would establish new subsidy programs for technology and building upgrade projects.

Senate Energy and Natural Resources Committee Chair Joe Manchin (D-WV) and Sen. Debbie Stabenow (D-MI) have introduced legislation to spur domestic manufacturing in energy technologies. Stabenow and other Democrats on the Senate Finance Committee have also announced they are drafting legislation that would provide incentives for manufacturing across a range of “critical technologies.”

In addition, the chairs of the Senate Intelligence and Foreign Relations Committees have joined with Schumer, Young, and a bipartisan group of other senators in introducing the Democracy Technology Partnership Act. The bill would create a State Department office charged with coordinating multilateral research programs, export controls, investment screening, standards-setting, and related policy measures as a counterweight to China’s influence.

Republicans on the Foreign Relations Committee have also reintroduced their STRATEGIC Act, which proposes an array of policies relating to China, including measures to counter intellectual property theft and coercive economic practices.

The committee’s Democratic majority is reportedly preparing to reintroduce the America LEADS Act, which has a similarly broad scope. When they first introduced the bill last year, it recommended that Congress allocate $350 billion in new spending over a multiyear period, including for the Endless Frontier Act and an array of other initiatives supporting R&D and manufacturing. Some of these, such as the CHIPS for America Act and National AI Initiative Act, have since become law through other legislative vehicles.

While policy bills generally recommend funding rather than provide it, Schumer has said the competitiveness package could include “emergency” funding for CHIPS Act initiatives, which is also a priority for some senior Republicans, such as Sen. John Cornyn (R-TX) and Rep. Mike McCaul (R-TX). There has been no indication of whether the package might include funding for other initiatives.

Although Schumer has said the competitiveness package will be built around the Endless Frontier Act, he has not indicated what sorts of revisions he may be considering to last year’s version. Aside from its recommended funding infusion for NSF, that version envisioned renaming the agency as the National Science and Technology Foundation and adding a new technology directorate that would absorb the bulk of the new money.

One former NSF director, Arden Bement, has previously expressed reservations about the original proposal. However, he has now joined with former NSF directors Richard Atkinson, Walter Massey, Neal Lane, Rita Colwell, Subra Suresh, and France Córdova in stating that the agency is well-positioned to achieve the bill’s goals. Seven former chairs of the agency’s governing body, the National Science Board, have also signed on.

As former NSF directors and National Science Board chairs with decades of government experience, we are supportive of the spirit of this legislation. We understand that conversations are ongoing and will continue to address important details in this legislation, so we do not wish to elaborate on those details here. We are confident that NSF can meet the goals of this proposed legislation and deliver the expected outcomes if given sufficient resources and discretion in implementation.

Making the case that NSF can support technology-oriented efforts effectively, the letter points to its past establishment of mechanisms for supporting collaboration between industry and academia, such as its Engineering Research Centers, Science and Technology Centers, Materials Research Science and Engineering Centers, and AI and Quantum Research Institutes. It also notes that NSF’s Innovation Corps and Convergence Accelerator programs have worked to improve the translation of research results into commercial applications.

The group has not indicated what specific changes to the original Endless Frontier Act they would recommend.

Other advocates also weighing in 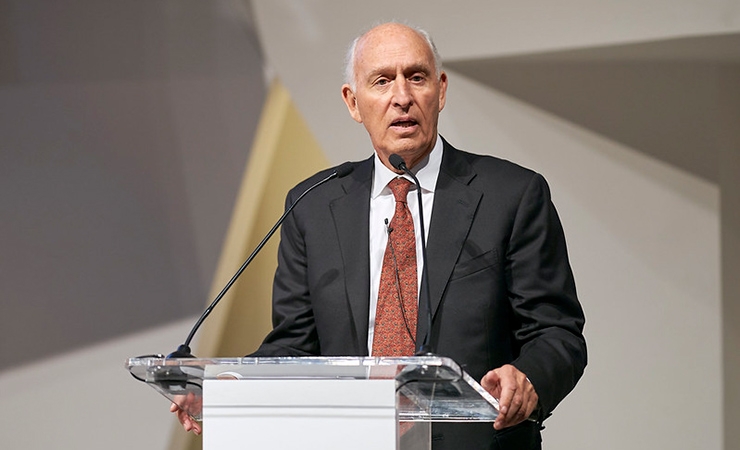 Bob Conn, then president and CEO of the Kavli Foundation, speaking at a 2020 National Academies symposium marking the 75th anniversary of the touchstone science policy report, Science: The Endless Frontier.

Calling the bill a “rare, once-in-a-lifetime opportunity to improve our scientific future,” the group writes that they have debated the original version among themselves and discussed it with congressional staff members and others in the research community. Addressing the envisioned funding infusion, they warn against setting up a funding profile that repeats the falloff that afflicted NIH’s budget two decades ago after Congress doubled it within five years. They also recommend adding more guardrails to protect funding for NSF’s established directorates.

The group discourages Congress from renaming NSF, pointing to the desirability of extending the agency’s “acclaimed history and position in science.” In addition, they argue against making the new technology directorate’s head a Senate-confirmed position or creating a dedicated advisory board for it, writing such changes are “likely to promote a collision of cultures within the NSF at a time when the performance of the agency will depend increasingly on collaboration among its various disciplines and directorates.”

While attention has been focused on reforming NSF, the recently released report of the National Security Commission on Artificial Intelligence recommends creating a new agency called the National Technology Foundation. In doing so, it argues that moving technological innovation into commercialization “requires an organization that is structured to accept higher levels of risk and empowered to make big bets on innovative ideas and people.” The commission’s chair, former Google CEO Eric Schmidt, has been consulting with Schumer on the Endless Frontier Act for more than a year.

Notably, leaders on the Senate and House panels that oversee and draft the budget for NSF have yet to publicly weigh in on the Endless Frontier Act.