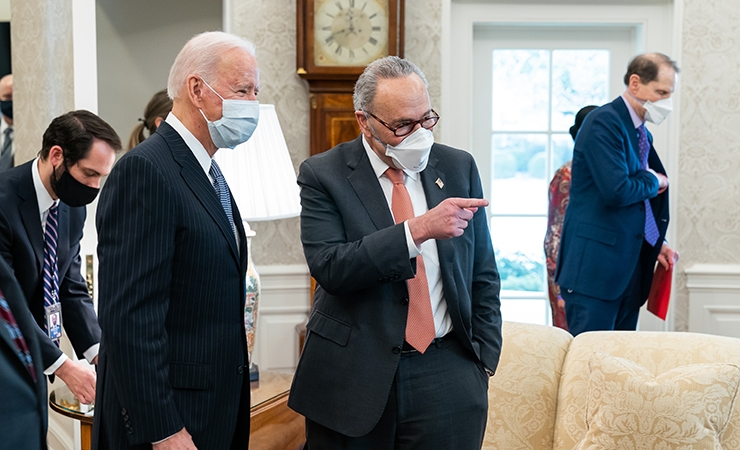 Senate Majority Leader Chuck Schumer (D-NY) announced yesterday that he has instructed Senate committees to prepare a legislative package aimed at bolstering U.S. competitiveness with China in critical technology sectors. He said its “centerpiece” will be the Endless Frontier Act, a bipartisan bill he introduced last year that envisions dramatically expanding the National Science Foundation through a new arm dedicated to advancing select technologies.

Schumer added that the package could also include “emergency funding” to implement the recently enacted CHIPS for America Act, which authorized an array of semiconductor R&D initiatives and a subsidy program to support domestic chip production. He said the package would also seek to alleviate the effects of the current acute shortage of chips worldwide, which is slowing production in the automotive industry, among other sectors.

“I want this bill to address America's short-term and long-term plan to protect the semiconductor supply chain and to keep us number one in things like AI, 5G, quantum computing, biomedical research, storage,” Schumer remarked. He explained that he intends the package to be bipartisan and is aiming to set up a Senate vote on it this spring.

The version of the Endless Frontier Act introduced last year proposed the most significant restructuring of NSF since its establishment in 1950, renaming it the National Science and Technology Foundation and creating a new agency directorate to advance a set of “key technology focus areas.” The legislation set an initial list of 10 areas and stipulated they be refreshed every four years with input from a new advisory board.

The bill also recommended Congress allocate $100 billion to the directorate over five years, well outstripping the agency’s current annual budget of $8.5 billion. The additional funds would be channeled toward an assortment of university-led research centers, testbeds, and consortia, and a portion would be allocated through the agency’s existing directorates.

Unlike NSF’s other directorates, the technology directorate would have authorities analogous to those used by the Defense Advanced Research Projects Agency, which allows its program managers considerable leeway to drive toward targeted R&D outcomes. Typically, NSF has used external peer review of grant proposals to steer its programs.

The reception of the Endless Frontier Act in science policy circles has been mixed, with some observers worrying it could dilute NSF’s traditional focus on fundamental research. For instance, Arden Bement, a former director of NSF and the National Institute of Standards and Technology, has argued such funds are better channeled through agencies that already have a mandate to support specific technology areas.

Others have asserted the bill is premised on a flawed understanding of technological innovation. A set of such critiques were published last year by Issues in Science and Technology, a policy magazine, as part of a series reflecting on the legacy of the 1945 report that helped spur NSF’s creation.

In one article, Patrick Windham, a former Senate staff member, joined two science policy scholars in arguing that universities are ill-equipped to spearhead large engineering projects or translate technological innovations into new products. They also maintained the bill “falls prey to the allure of radical technical progress” and neglects the importance of incremental innovation in industry. As an alternative, they propose that NSF first pilot a smaller technology development initiative and that Congress should meanwhile boost funding for DARPA and consider creating DARPA-like entities for non-defense technologies.

In a rebuttal to the bill’s critics, MIT President Rafael Reif argued it would not diminish NSF’s traditional mission, stating it “rightly creates a wall between the new and existing directorates.” He also pushed back on the idea of more incremental action, writing, “Small-scale policy experiments and tinkering across multiple government agencies are unlikely to prevent the next 5G debacle or to yield the next industry-spawning invention. Some of the models cited as alternative approaches — such as creating additional Advanced Research Project Agencies — were greeted with just as much skepticism when they were first proposed.”

In any event, the Endless Frontier Act is apt to be modified as it advances through Congress. The committees with jurisdiction over NSF have yet to formally weigh in on the bill. Among them, the House Science Committee has been preparing its own legislation to update policy for NSF and other science agencies under its jurisdiction.

There are also other ideas circulating in Congress on how to dramatically scale up technology and workforce development initiatives. For instance, Rep. Ro Khanna (D-CA), who is a co-sponsor of the Endless Frontier Act, also introduced separate legislation last year to establish a “Federal Institute of Technology” that would fund dozens of R&D hubs across the country. In the Senate, Sen. Mark Warner (D-VA) has proposed creating a new division in NSF that would fund partnerships between universities and local workforce organizations, such as unions. 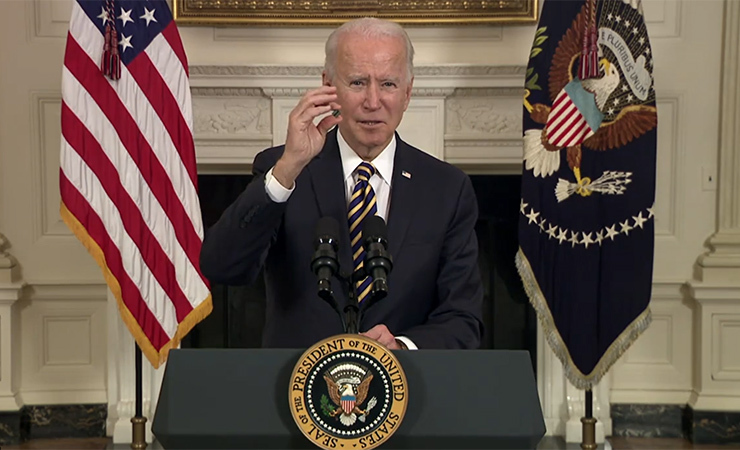 President Biden holds up a computer chip during remarks he made today before signing an executive order on strengthening supply chains.

In his remarks yesterday, Schumer said he has three overarching goals for the package: “enhance American competitiveness with China by investing in American innovation, American workers, and American manufacturing; invest in strategic partners and alliances: NATO, Southeast Asia, and India; and expose, curb, and end, once and for all, China's predatory practices, which have hurt so many American jobs.”

These match the stated goals of a major competitiveness bill called the America LEADS Act that Schumer introduced last September alongside the top Democrats on several committees. That bill proposed expanding various existing research and manufacturing programs, such as the Manufacturing USA network of institutes. The bill also endorsed the Endless Frontier Act, though it did not directly incorporate the act’s provisions, instead creating a White House-led process for prioritizing specific technology areas.

Discussing his hopes of obtaining bipartisan support for the new package, Schumer noted that the Endless Frontier Act’s co-sponsors last year included Rep. Mike Gallagher (R-WI) and Sen. Todd Young (R-IN). He added that he had discussed the new effort with Young, who he said is “eager to get it done.”

As a reason for moving quickly with the new package, Schumer pointed to concerns about the chip supply chain situation, remarking, “Semiconductor manufacturing is a dangerous weak spot in our economy and in our national security. That has to change. You've all seen that auto plants throughout America are closed because they can't get the chips. We cannot rely on foreign processors for the chips. We cannot let China get ahead of us in chip production.”

Momentum is continuing to build around action to alleviate the current chip shortage, which has been attributed in part to an underestimation of demand during the pandemic. Earlier this month, 15 senators urged Biden to take rapid action as well as to help secure funding for implementing the CHIPS Act. Today, President Biden met with a bipartisan group of senators to discuss the problem further and signed an executive order mandating a review of supply chains for semiconductors, among other “critical goods.”

Recounting the meeting, Sen. John Cornyn (R-TX) remarked, “We need some additional funding in order to incentivize the reshoring of high-end semiconductor manufacturing here in the United States. Right now, China is building 17 semiconductor fabrication manufacturing facilities; we have one in the early stages of being built in Arizona. So the president was very receptive as was the vice president. He said, ‘We’re all in.' We all understand this is important not only to our economy but to our national security.”

Prior to signing the order, Biden outlined his views on the importance of supply chain security for semiconductor chips:

Remember that old proverb: 'For want of a nail, the shoe was lost. For want of a shoe, the horse was lost,' and it goes on and on until the kingdom was lost, all for the want of a horseshoe nail. … Recently, we've seen how a shortage of computer chips like the one I have here … has caused delays in production of automobiles that has resulted in reduced hours for American workers. A 21st century horseshoe nail.

Later, referring to the CHIPS Act, he added, “They've authorized the bill, but they need literally $37 billion short-term to make sure we have this capacity. We'll push for that as well.”